Since its release on PC in November 2018, Warhammer 40K: Mechanicus has proven itself to be one of the better games set in the Warhammer 40K universe. Currently, the game holds a “very positive” rating on Steam and recent reviews have only added to it. The grim dark strategy title hits consoles today and the good news is that the port holds-up well against its PC counterpart. Those unfamiliar with the game should be warned though; this isn’t the XCOM clone it appears to be. Warhammer 40K: Mechanicus does things its own way, both for better and for worse.

In comparison to the PC version, Mechanicus on consoles is technically inferior, but it’s not worse to the point of making a negative impact. On PS4, Mechanicus appears to run at around 30fps most of the time. There are times when the game dips below this, but it doesn’t happen too often during normal play. If it happens at all, it’s going to happen while the game’s trying to keep track of multiple units and weapon effects at once. There’s also some slow-down when navigating between units in the cohort menu.

Other than this, the games visuals are more or less consistent with the PC version. In fact, as far as technical issues go, the only other thing is a that it’s just a little more difficult to navigate the menus than it should be. The PS4 version of the game doesn’t support the controller’s d-pad, which makes it too easy to select things one doesn’t want to. Mechanicus also doesn’t always recognize when the X-button is pressed, but that never crosses the boundary into being actually frustrating. It’s just a little inconvenient. 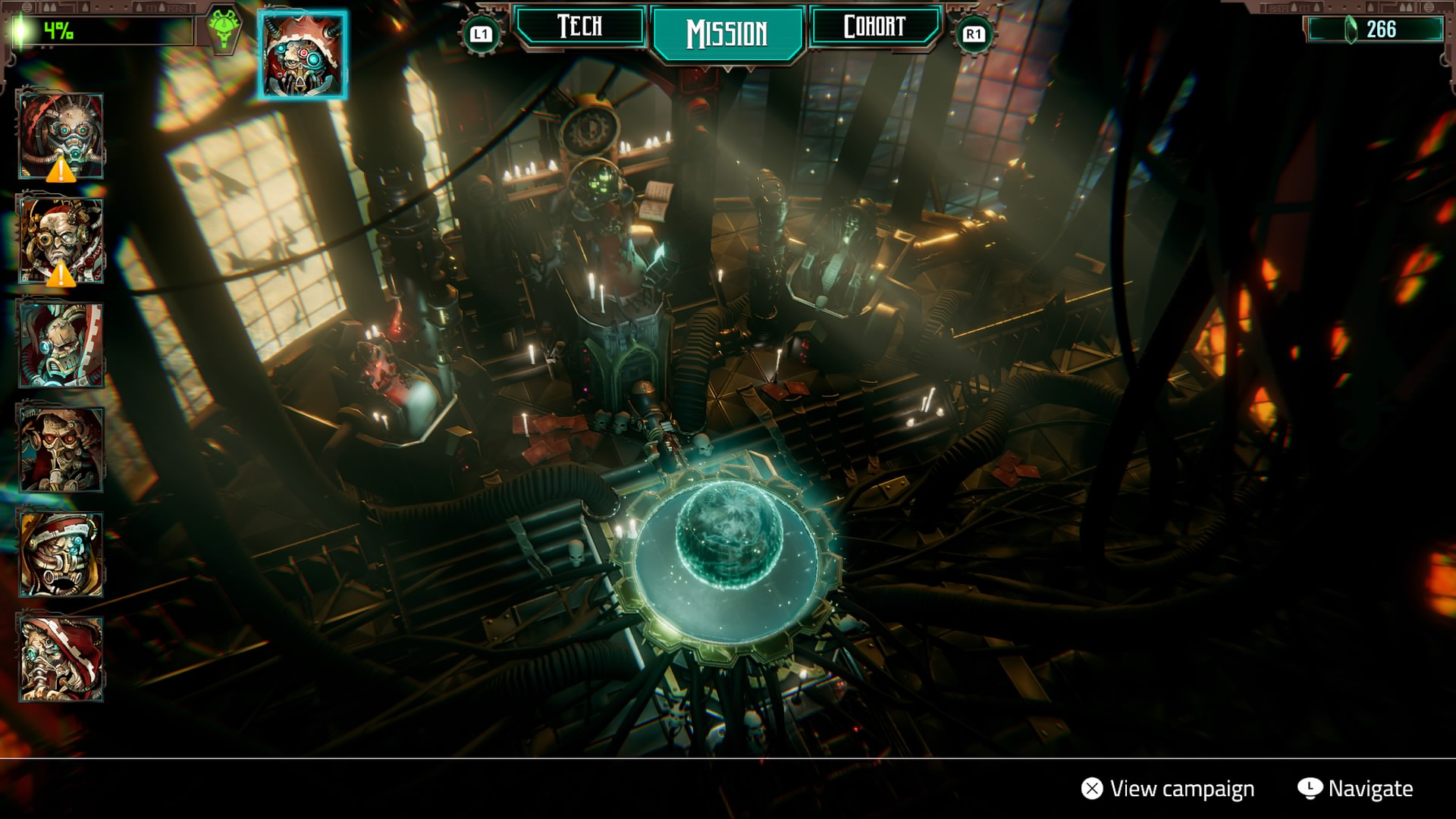 As for how the game plays, one should once again be aware that Warhammer 40K: Mechanicus is not an XCOM clone. It resembles its peer on the surface, but there actually isn’t much tying these two games together besides a shared genre. The most notable difference between the two games is probably seen in how combat works. In the more recent XCOM games like XCOM 2, all units typically get two actions per turn, with one of them almost always being a movement action. Characters can almost always attack so long as they don’t move and there’s a hard limit on how much a typical character can do on a turn. This is not the case in Mechanicus.

In Mechanicus, its movement that’s typically free and attacking that requires extra resources. Another important distinction is that characters can take as many actions as they want in a turn, so long as they have enough “CP” (Cognition Points) to cover the action. This means that one could, in theory, run all the way across the map and launch a devastating attack if they have enough points. This probably sounds like a system that’s stacked in the player’s favor, and that might be true in the mid- to late-game, but it comes at a cost. CP is shared among all units, so if one unit uses most of it then the rest will have no option but to sit on their hands until the next round. Correctly deciding when to make CP-heavy power plays and when to conserve is usually going to be the difference between success and failure in a Mechanicus mission.

By default, Warhammer 40K: Mechanicus is a tough game. Failing to spec the first couple of tech-priests into the correct disciplines will quickly derail one’s campaign. Indeed, Mechanicus is the kind of game that allows its players enough freedom to basically hamstring themselves at the outset. This will likely cause frustration for genre newcomers who don’t like adjusting difficulty, but everyone else needn’t worry too much about this. Game difficulty in Mechanicus is highly customizable. Players can alter the difficulty at any time outside of missions and can even tune it further if they want. Hints for progression, increased currency yields and decreased amounts of enemies in during are all available options for players who’d like to take advantage of them. The reverse is also available for those who’d like to take the game to the absolute extremes of difficulty. Whatever the choice, though, the most impact will be seen in the early game, where units are few and weapons are weak. 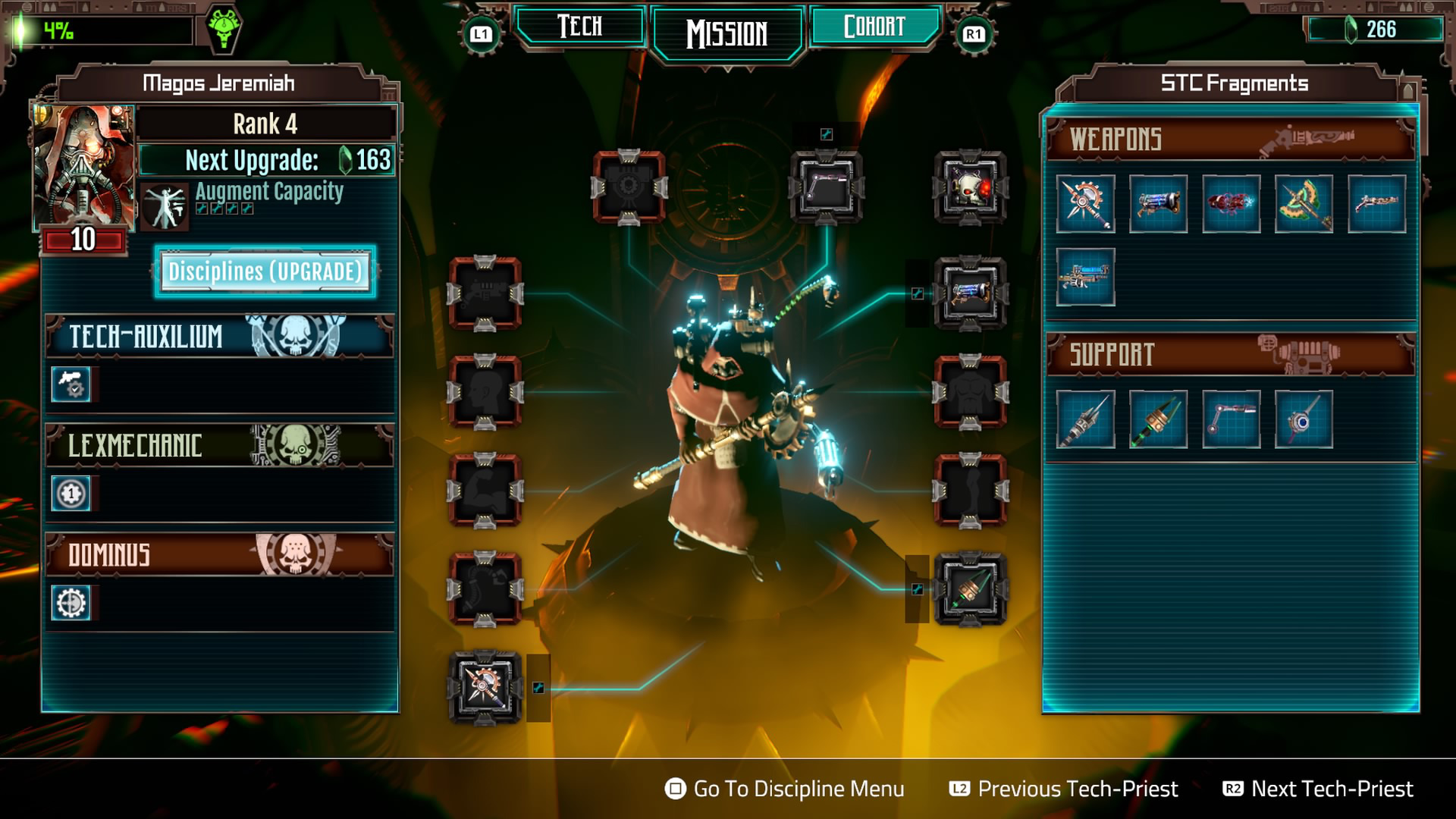 Progression in Warhammer 40K: Mechanicus is seen primarily in the development of one’s “cohort,” that is the small army of Skitarii, Tech-Priests and other units one assembles over the course of the game. Tech-Priests in particular are the greatest indicators of progress, because these are the units that players can upgrade and customize. Tech-Priests can be outfitted with any piece of gear allowed by their discipline skills and they can equip more as more skills are unlocked. Each piece of gear is modeled on the tech-priest, so these units can quickly start looking distinct from one another. As for these discipline skills, tech-priest can be specced into any tree at any time; the only pre-requisite is that basic skills must be bought before advanced skills. This makes these units extremely versatile throughout the game, especially in the hands of a knowledgeable player.

As for the story, players take on the role of Dominus Magos Faustinus. He’s a high-ranking member of the Adeptus Mechanicus, the engineering arm of the Empire of Man. They also happen to be a powerful cult that worships knowledge (embodied as the “Omnissiah”). They’ve recently rediscovered the world of “Silva Tenebris,” which just so happens to be filled with Necron (think zombie-terminators) tombs. There’s knowledge to be gained here, so players are tasked with helping Faustinus explore the planet and then either destroy it or bring it under the dominion of the Adeptus Mechanicus. The outcome is determined by how well player fare as they explore the planet’s many tombs; there are many decisions to be made in there outside of battle and all have an impact on the final outcome. Time is of the essence too. The longer every fight and mission takes, the more Silva Tenebris “awakens.” If the planet manages to fully awaken before Faustinus’ work is done, then it’s game over. So make sure to work quickly.

The version of Warhammer 40K Mechanicus coming to consoles includes the Heretek expansion, which adds new story chapters, new missions, the “Xenarite” discipline and a rogue group within the Mechanicus bent on destroying the order from within. It’s all interesting stuff and the game is better for it. The Xenarite’s high-risk, high reward skills make for cool possibilities when developing tech-priests and the “heretek” faction adds some fun intrigue to the story. It’s not a game-changing expansion on the level of something like XCOM’s Enemy Within expansion, but it’s still worthwhile. 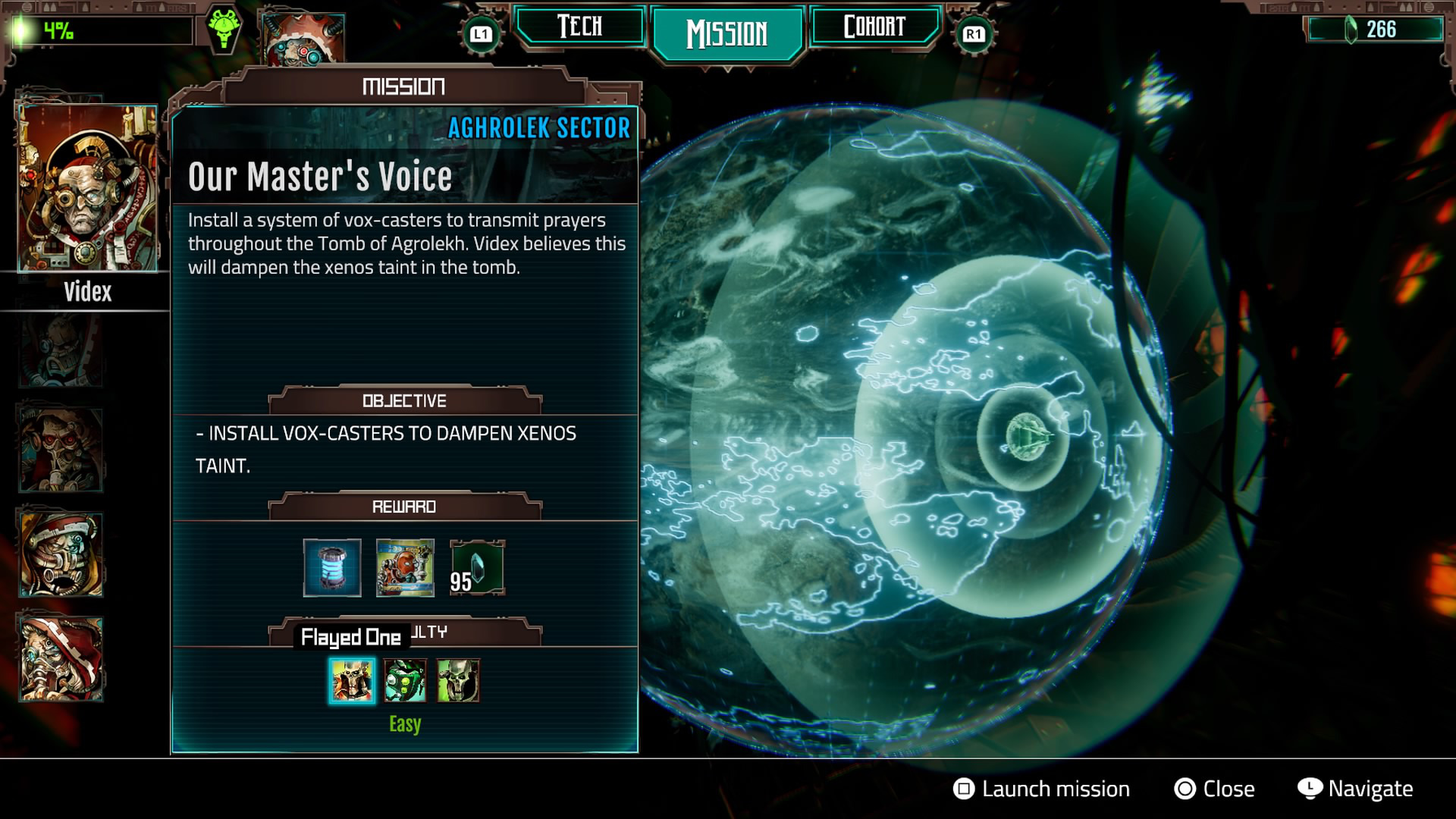 Just like its PC counterpart, Warhammer 40K: Mechanicus on console is a great game for fans of either Warhammer 40K or turn-based tactics games; it’ll likely be even more fun for those who enjoy both. PC is probably always going to be the definitive way to play this game, but console-based fans have a solid port on their hands here. Mechanicus looks good, sounds good and mostly controls well with the controller. Newer players will likely want to take advantage of the highly-customizable difficulty settings, but series will surely be pleased with the default difficulty options. Warhammer 40K: Mechanicus isn’t XCOM, but that’s actually a good thing for the most part. This game is defined by its unique features just as much as it is by the Warhammer 40K license and it’s mostly the better for it.