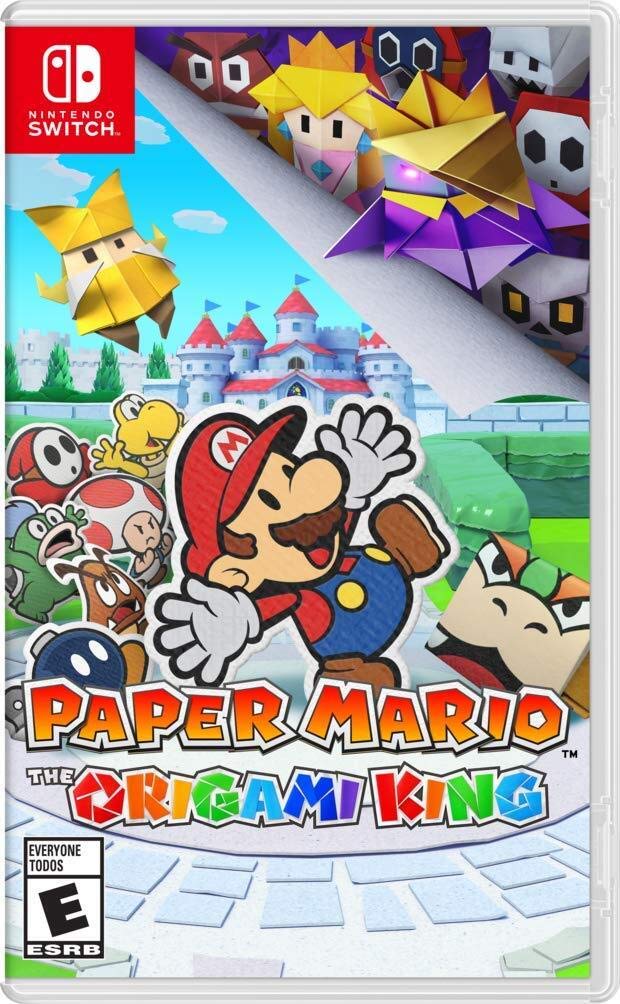 Nearly twenty years ago, the world was introduced to the concept and execution of Paper Mario. The unique, charming title took something as simple as paper and made it into an unforgettable adventure. It would go on to see multiple sequels, with the original two being more traditional RPG to the more modern action adventure style. Although the later titles were criticized by fans at times for not being what the original two started, players were excited and hesitant when The Origami King had a surprise trailer drop. It was yet another in the series that didn’t go back to its roots, but enough people were curious to want to dive in. Is The Origami King an enjoyable time or is Paper Mario still in a tough spot?

The story begin with Mario and Luigi having been invited to the origami festival in the Mushroom Kingdom. After arriving they notice it’s rather quiet, but head inside only to find Princess Peach has been folded in an odd manner and is rather antagonistic towards Mario. After being dropped into the dungeon, Mario comes across another origami person by the name of Olivia. The two decide to team up but run into Olly, brother to Olivia, who is set on being the origami king and folding everyone in the kingdom to his liking. After narrowly escaping with the help of a folded Bowser and his minion, they watch as the castle is engulfed in streamers and lifted to a far off mountain. Mario and Olivia then decide they must put a stop to the goings-on and set out to break the streamers and get inside the castle to put a stop to King Olly.

The majority of Mario’s time is spent exploring various areas, solving puzzles and of course fighting enemies. Much of his adventure is walking around open areas uncovering secrets and figuring out how to progress, with enemies cropping up to try and put a stop to this. The general origami soldiers will be the most common type of battle that’s participated in and is a simple concept with some great depth. Once in battle, enemies will be rearranged across the circular board in different patterns. It’s up to Mario to either put them into a straight line or square of four to attack at his strongest. Failing to do this in the time limit is perfectly fine, but leads to weaker attacks. The board can be rotated or slid in order to rearrange enemies. These start out simple at first, but as the adventure continues turns into more difficult puzzles that require quick thinking or some extra coins to ask for assistance from the Toads. 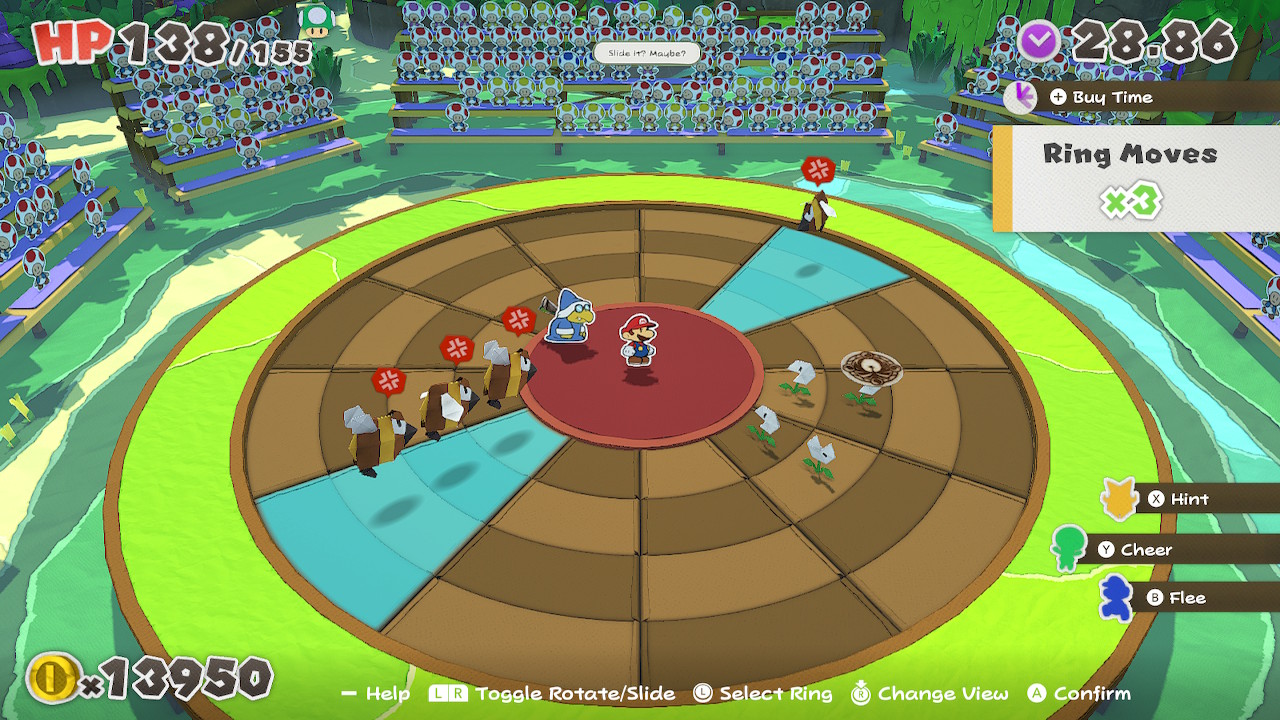 Toads are both a collectible and aid for Mario on his journey. Throughout the world Toads have been squished or transformed into every facet of the surrounding areas. Turned into animals or hidden in objects with no way of escaping themselves. If Mario is able to free them, they’ll join his audience for fights and can assist in battle for a fee. If battles are getting a little rough Mario can pay for more time to help or even pay the Toads to assist in combat. Depending on how much Mario pays up, the Toads will help in different ways. It could be as simple as doing some damage to enemies on the field or they could help solve the puzzle outright or even heal Mario. These can be useful in tight situations, and with money so readily abundant it’s easy to send for their help at any time in order to assist. They can even help during the most exciting combat aspects, boss battles.

Boss battles are easily the best part of combat in Origami King. They flip the situation on its head and change up how combat works in order to create extremely amazing and well-built fights. Instead of having Mario in the middle, the boss in question is positioned front and center. Mario isn’t able to just select an attack and go, however, as he’ll have to navigate the ring in order to attack. The boss battle rings work differently and have a variety of icons scattered across the board. The main icons are arrows, which are required to enable Mario to move from his starting position. Once he steps on an arrow he’ll head in the direction it’s pointed until he hits another or is stopped by an attack panel, takes damage from an on-field effect or hits an arrow he already walked over. Every boss has a different strategy to defeat them and learning this is how their puzzles work. Some enemies need to be hit from behind or can only be damaged by a certain kind of attack. These battles usually have multiple phases and can take a little while to figure out, but they’re the best part of any combat Origami King has to offer. These boss fights are also where Mario and Olivia will first meet the Vellumentals; forces of elemental nature that have been turned to origami. After they’re defeated, Olivia will be able to take their power which can be used to overcome obstacles on the field and even used in other boss battles in order to get the upper hand. 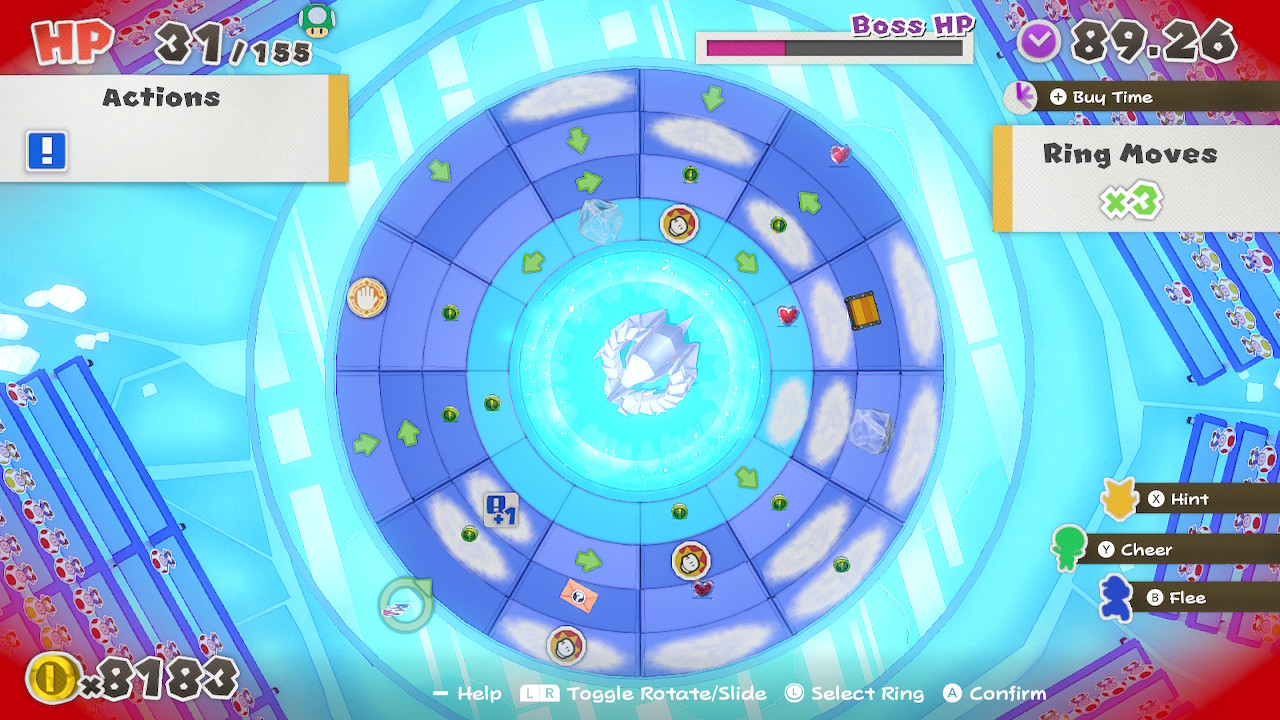 Since there are no traditional levels in Origami King, Mario can power up in a few other ways. The first and perhaps most important is by increasing his life. As Mario’s HP increase so does his attack power. His attack can further being increased by extra weapons found or bought around the world. These additional hammer and boot weapon times do more damage but can also allow him to hit certain enemy types more effectively. Putting on iron boots lets Mario jump on spiked enemies and certain hammers can be thrown to reach flying enemies. Unlike the normal boot and hammer, these items will degrade over time and eventually break. Fortunately three extras can be equipped at once which is typically more than enough, and they are frequently dropped with shops being available regularly through quick warps. It’s easy to stock up on extras just in case and is good to have a variety on hand. Mario can also purchase various accessories on his journey that aid in his abilities. Some help find collectibles, while others increase combat time or the amount of health Mario starts with. While not as vital, they aid in making things a little bit easier in more challenging battles.

Origami King’s presentation is utterly gorgeous. The paper world is crafted to perfection, with the details simply looking fantastic to the point of wanting it to be a real tangible thing to be played with. The instances of things that aren’t purely paper, such as the water, fit seamlessly with the world and add a real sense of beauty to it. The soundtrack is also amazingly catchy, with the combat themes in particular being great as they change with each major area. The dialogue is clever and witty, with jokes around every corner that garner little chuckles. The Toads often have one-liners after being saved, giving them quirky personalities that make it fun to see what they have to say. The story is relatively straightforward and simple which helps keep things flowing quickly without getting bogged down too much on exposition but has a surprising amount of depth when it wants to go a little deeper. Olivia in particular is a fantastically outstanding character, with her dialogue and characterization being so delightful and charming that it’s hard not to utterly love her to pieces. 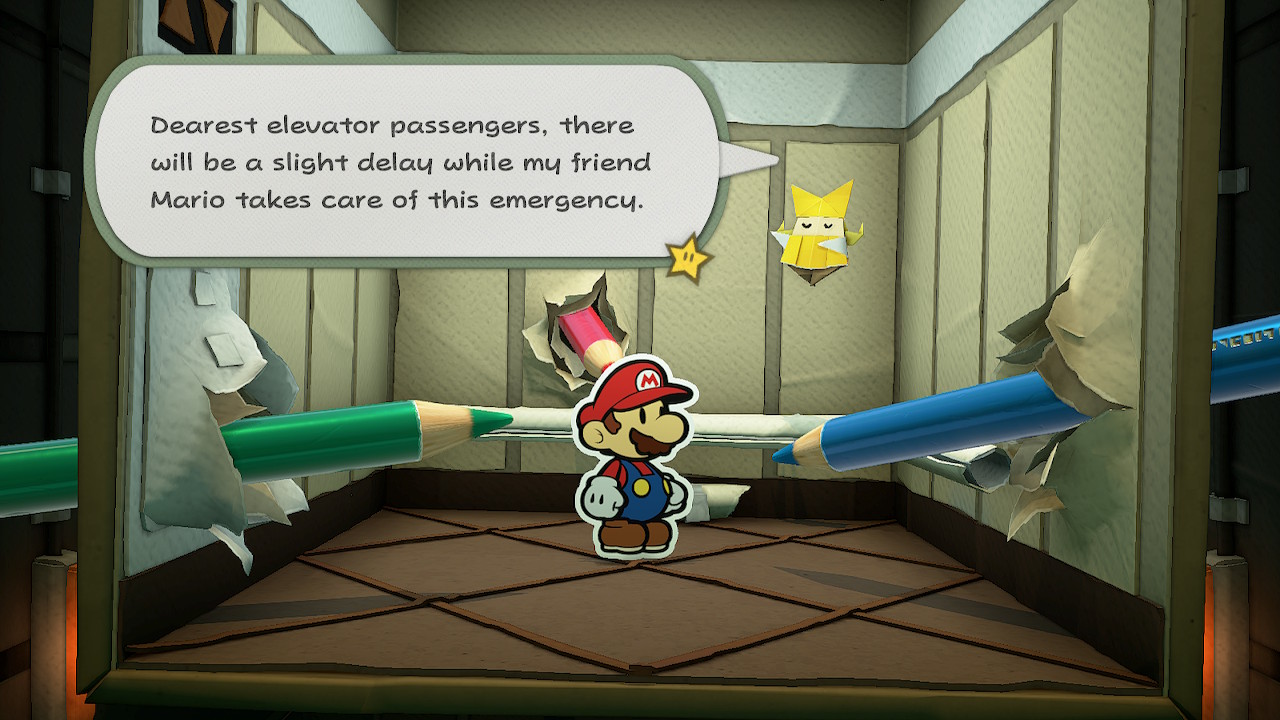 Paper Mario: The Origami King is a wonderful new entry that helps sell the idea that trying new things was the right move. While the series has had some ups and downs, Origami King nails the mix of enjoyable combat and fun gameplay. It would be nice if there was a little bit more depth to the story, but there’s enough to make everything fun and lighthearted while occasionally having dynamic story moments that bring the characters together. The combat could potentially be more difficult for younger players, but it’s hard not to recommend picking up Paper Mario: The Origami King when it’s simply a blast from start to finish.