Sometimes you spot weird trends among indie games, typically due to the kinds of coincidences and mutual inspirations you likely weren’t able to see coming. And apparently, one such trend now is multiplayer games with vinyl toy aesthetics. You have Headsnatchers, then the upcoming Outcasters, and even Fall Guys has some of it spliced into its DNA. And it makes sense, as large groups of players will want loads of colorful characters to choose from, allowing for a lot of amazing, colorful artwork that blends together a ton of different styles and helps to create equally colorful worlds to play in. But now Mythical (partnering with Third Kind Games as well) are taking things to the next level with Blankos Block Party, a full-on free-to-play MMO built around a world of collectable vinyl toys that you can play as.

Blankos Block Party revolves around our titular collectable figures called Blankos, and having invented these toys, Mythical are now exploring a world where they come to life and go on various adventures or just hang out, like a more insane version of Toy Story. In a hands-off stream, we were shown a demonstration the game and exactly just what players will be able to do with their Blankos. It began in The Junction, a hub for solo and multiplayer games and quests. There were giant balls bouncing around, a giant food mountain to scale and much more. “If you can get on it, then it’s yours to play with,” is how this world was described as. 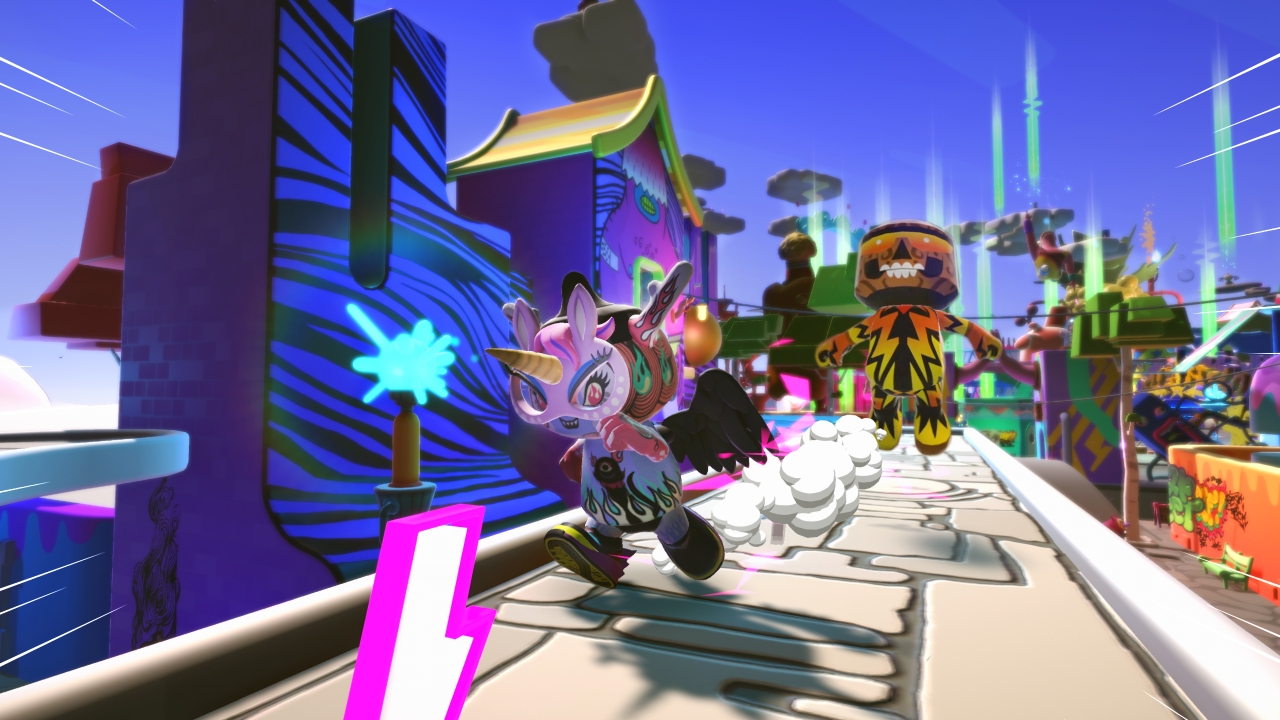 Via the Junction’s depot you can tackle various quests that can reward players with new gear and ability upgrades. These quests include parts where you have to engage in platforming around the Junction, clearing out storm clouds in order to restore color, shooting ranges where you can test your accuracy, and races through various rings that are set up, among other things. To excel at some of these quests, though, you may need to make use of abilities like double jumps, wall jumping or gliding around with wings that you’ve equipped. You can actually train your Blanko with different skills or abilities that you customize, including those that have you collecting lightning bolt-shaped “vibes” scattered about in order to pull off.

While the Junction has several fun activities to try out, however, the real meat is in hopping into the Party Bus to try out many of the other games and events created in the Build Mode by other players. We got to see a couple of examples, beginning with Pachinko, which as the name suggests, has Blankos sliding down a massive pachinko board. Players have the goal of collecting the most vibes along the way, with the vast majority of vibes stashed in the very bottom at the end, meaning getting there quickly is a key to victory. There was also Headbanger’s Ball, which was a platforming race up a giant wall made of speakers, shag carpeting and more. It relied on a lot of tricky jumps in order to succeed, and like Pachinko, looked like a ton of fun. 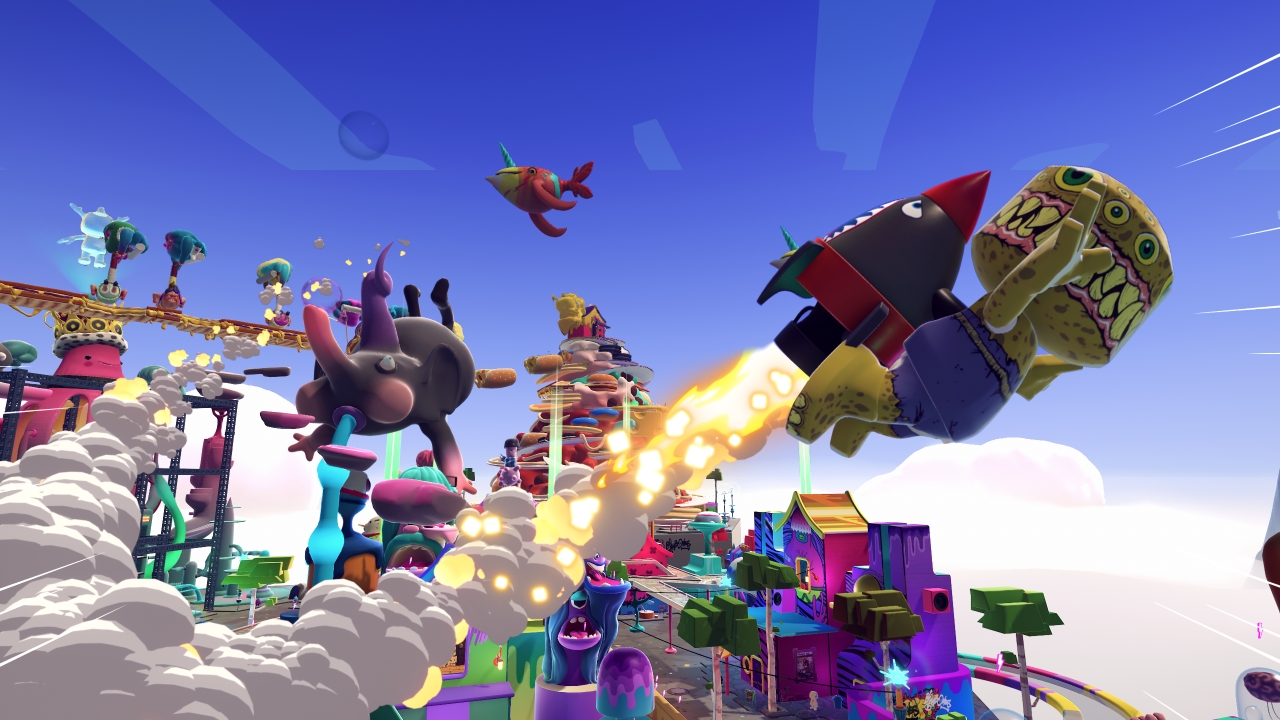 Those were just races, though, and players are able to create other activities like team shooters. To demonstrate this, we were then treated to a look at Blankos Block Party’s Build Mode in action. Floating around a balloon, your Blanko gets to use a spray can in order to add more props and scenery to the world, such as new platforms, cactus walls, spotlights or giant muscular maneki statues. Switching to Test Mode can be done almost instantly, allowing players to have a quick run in their creation, switching from day to night or gaining the ability to fire your dart gun at the touch of a button. It all seems nice and accessible, and it should be fun to tinker with. There will indeed be a huge constructor kit at launch, but according to the developers, they can’t estimate just how many assets will be available. It’s just that huge, apparently.

After being able to create objectives, secondary objectives, and restrictions, this new level – named Shooty McShootface in a possible Borderlands homage – was ready to go. A point was made about how quick publishing levels would be, but we’ll see how that goes when a large player base comes in. As for the level itself, while it didn’t break any new ground in terms of gameplay, the shooter we saw looked simple and fun, with the Build Mode allowing for nice-looking level design with several bits of cover, platforming bits and strings of vibes perfectly placed throughout it all. It should be fun just to see how wild other players get with their levels, with later seasons set to bring even more game modes to work with.

Of course, the people behind the Blankos have already gone wild as well in created several unique figures to collect. So far artists and designers such as Tara McPherson, Pete Fowler and James Groman have all contributed towards creating wild styles of each Blanko. Via your gallery, you can check out whatever Blankos you have so far, and check out details on them such as little bios behind their characters, artist info and what season they’re from, with certain Blankos only being available in certain seasons, making them rather desirable. 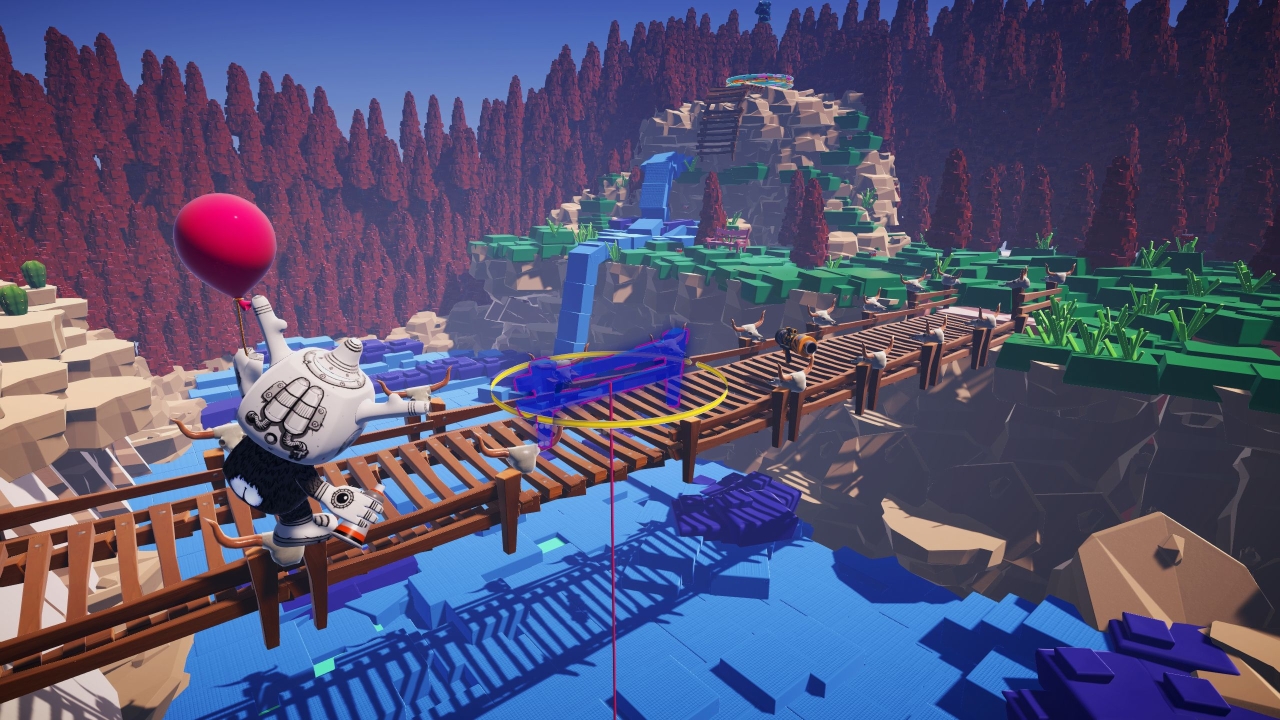 Given that Blankos can be collected via real money, though, and can actually be traded in a way that eliminates the need for a “grey market” by giving ways for players to create safe transactions where they can set values, I had to ask if there were any similarities to “toys-to-life” games like Skylanders, Disney Infinity or games utilizing Amiibo figures that also had collectibles and similar (albeit physical) markets, and if it felt like Blankos Block Party could run the risk of running into the same fates as those games. Mythical feel there isn’t any risk compared to such titles, as Blankos Block Party is primarily meant to be a game, plain and simple (and in hindsight, Mythical has Skylanders veterans on their team, meaning they hopefully know what to do).

Creating a new MMO can be a rather daunting and risky task, but so far, it feels as though Blankos Block Party just may be able to pull it off, thanks to its variety of gameplay, fun creation tools and an amazing style that makes for some rather memorable virtual toys to collect. We’ll see for sure if the Blankos market actually takes off when the game launches on PC later in 2020, but it looks like we’ll be getting one giant, fun platforming party no matter what.