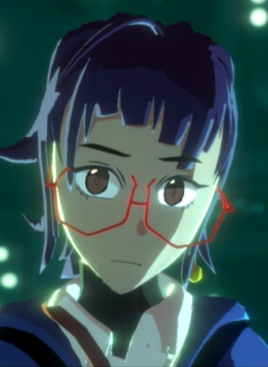 There’s something about cafés, coffee shops, bars, diners and more that make for seemingly irresistible storytelling devices. Typically, it’s because since these types of establishments draw in people from all walks of life or the various people that reflect the neighborhoods and worlds that they’re located in, it’s fun to imagine how everyone who stops by has their own individual story. Of course, certain genres can put twists on these settings, adding in the stories of characters from more out-there worlds. Hence why we have narrative-heavy video games that revolve around the likes of cyberpunk bars and fantasy coffee shops, among other locales. And now, Australian developers Route 59 bring us Necrobarista, a visual novel set around a modern-day café inhabited by various ghosts, as the name implies. But does the story serve up a blend that perks you up or puts you to sleep?

Now, going into Necrobarista, I had heard that it had a lot of setbacks and false starts in addition to its delays…and I’m not going to lie, if you had followed the game up until now, all of that shows. Aside from the fact that it clearly underwent a massive overhaul since its debut trailer (which still has several of the same characters and similar elements, but practically none of the moments shown in it appear in the final game), even the second-most recent gameplay trailer from last year has a glimpse of a character that doesn’t end up appearing at all and one whole chapter suddenly introduces three characters that never appear in the main story again. You can tell that there were issues in getting this game to the finish line. 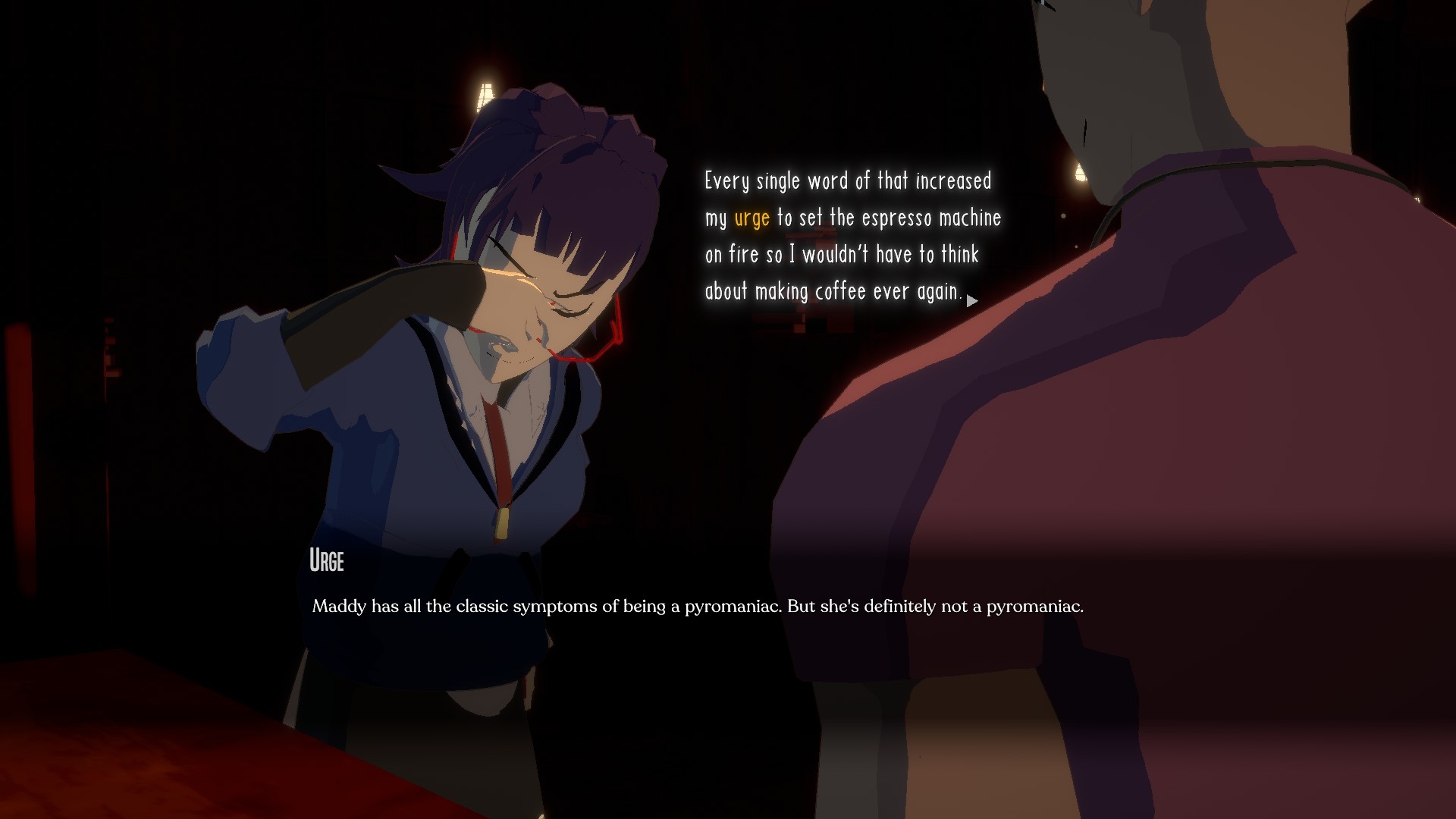 But the biggest shock to me was in how Necrobarista played. The last time I had gotten my hands on it was way back during PAX West 2017, where I was able to check out a demo of it. In it, I witnessed a pinfinger game between two of our main characters, Maddy and Kishan, and just as it hit the climax, time froze and suddenly I could walk around, hear what other characters around them were thinking or just check out various parts of the café for little bits of its history. It was an impressive little twist, having you literally explore all angle of the story. But in the finished product, that structure has been replaced (though the pinfinger scene remains) and instead we have a linear tale where you click to progress between scenes and bits of dialogue, with the 3D movement now placed in between chapters, where you can explore the café.

Set in Melbourne, Australia at a mysterious location called the Terminal café, Necrobarista focuses mainly on the Terminal’s new owner, a young woman named Maddy, inheriting it from her older-then-they-look mentor, Chay. The two are actually necromancers, and the Terminal is actually a waypoint where the deceased can hang out for twenty-four hours before they move on and where the living get to hang out with them as well. On this particular night, we’re introduced to Kishan, a young, newly-dead man who just wandered in and now has a ton of questions. Even moreso when famous Australian outlaw Ned Kelly shows up, working for the Council that manages the affairs of life and death, saying he has a massive debt to collect from the Terminal. 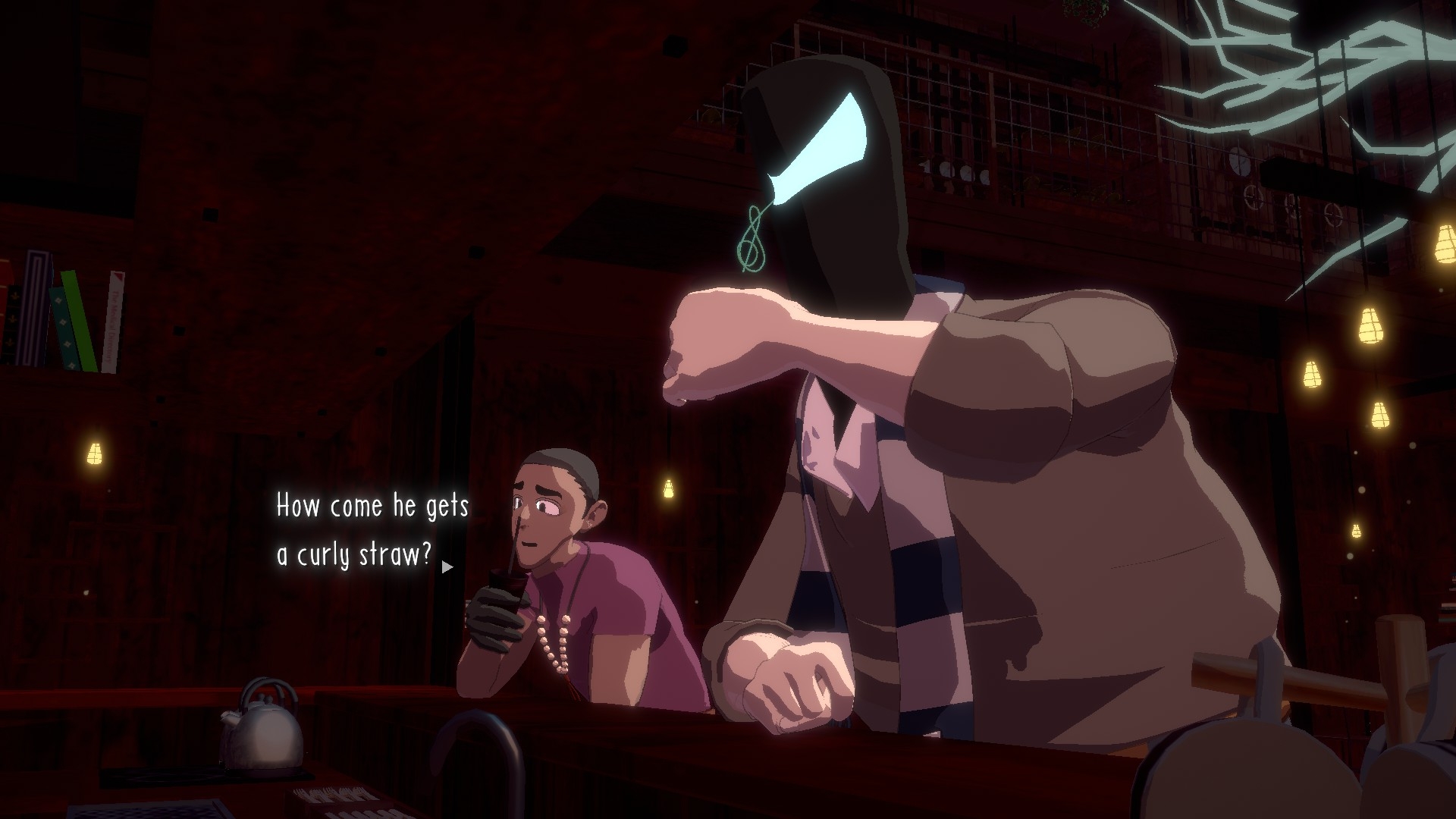 The overall tale in Necrobarista is one about acceptance and letting go, with occasional musings on life, the inner workings of the game’s world and even a few slice-of-life tales thrown into the mix. It’s a story that easily gets you hooked thanks to terrific and witty dialogue, genuine moments of emotion and a desire to understand just how everything works here. It’s one of those instances of world-building where you get just enough to form a basic explanation on how thing operate (such as how a person’s hours can be extended or taken away and some folks can even stay at the Terminal beyond the twenty-four hours), while still leaving enough intrigue open when it comes to lot of backstories and bits of history, especially when it comes to the characters.

Speaking of the characters, that’s where Necrobarista gets to shine when it comes to its story. We have an extremely likable lot here with their own individual quirks and backgrounds and they all make amazing impressions and have a nice variety of personalities that cause you to get attached to them rather quickly. Maddy is nicely snarky and clearly enjoys messing with people, while still having moments that show how she truly cares, as she sets up a mysterious project that keeps you intrigued. Kishan acts as a bit of an audience surrogate, being the relatively normal new guy, but clearly has his own worries over his own life and what exact happens next, showing more of an interest in the Council as things progress.

The MVP for me, though, is Ashley, the young teenager who, in the game’s own words, adopted Maddy and Chay a couple years back. She’s actually a brilliant inventor who loves to experiment and create little robot buddies called Ashlings (who have little scenes in between chapters), and even has a mechanical arm of her own…and is obsessed with attaching knives to all of her Ashlings for robot death battles, goes hyper when given coffee and chocolate, comes up with insane inventions, geeks out over everyone, and plays games with Maddy and Chay during any breaks. Her childlike personality leads to a nice dose of levity suits the bizarre world of Necrobarista, yet she still gets her own genius moments and times when she lets her guard down. It’s telling that I was almost tempted to include her in every screenshot here. 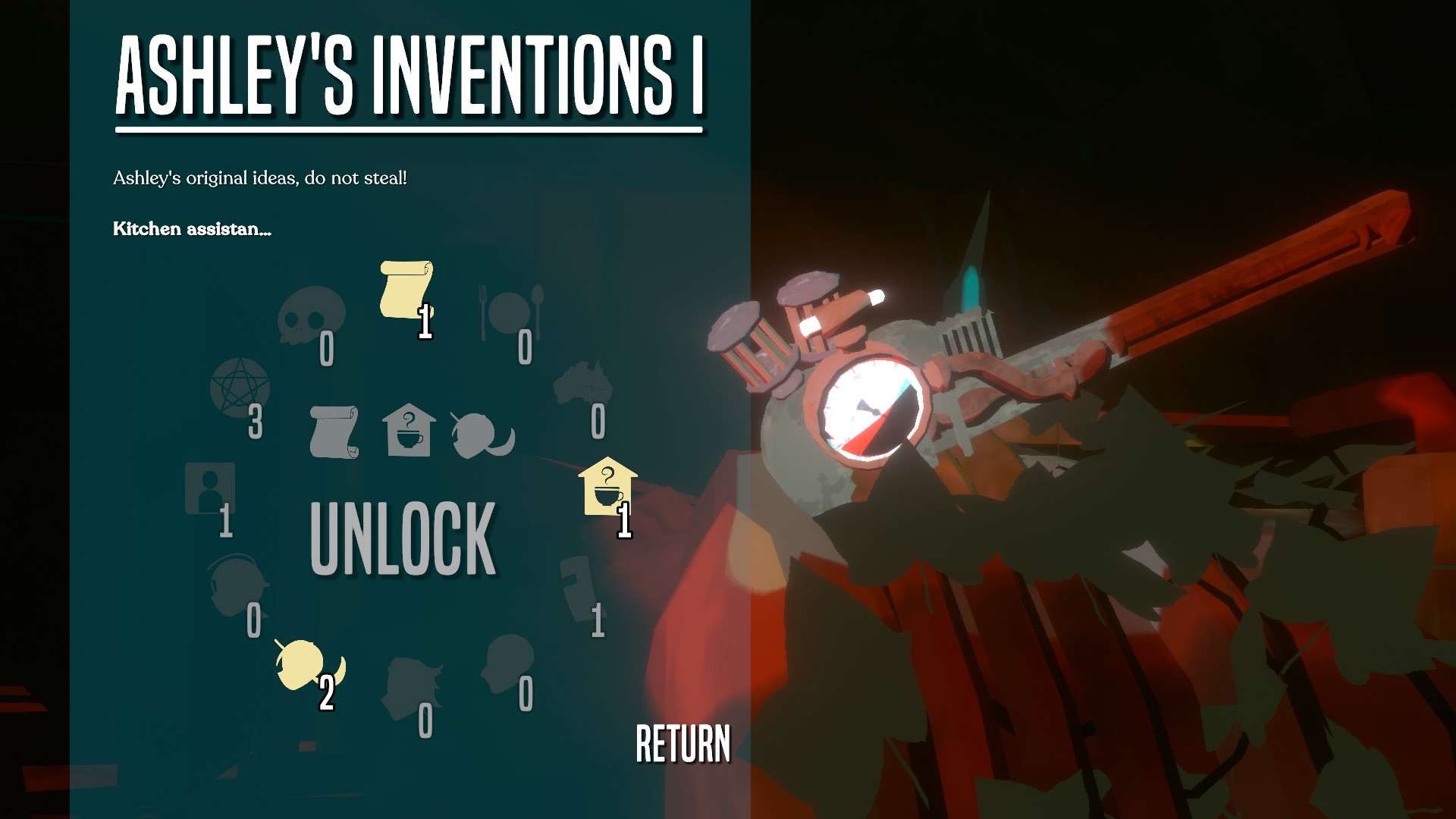 The presentation of the story also helps immensely. To say that Necrobarista is stylish would be an understatement. The game makes great use of its 3D world and expressive anime-styled models, using a grand assortment of dramatic angles, establishing shots, dynamic camera movements, reaction shots and even little bits of motion as you move the mouse around the screen to great effect. The end result is that even with moments of limited animation or parts where everyone stands still, even the smallest scenes have a grand amount of personality in them. The Terminal also makes for a gorgeous setting, with quantum mechanics allowing for a layout of varied rooms that feature grand industrial buildings, immense glowing trees and even an underwater workshop all containing an amazing amount of detail. The soundtrack is also dead-on perfect as well, using a nice batch of jazzy synth tunes to their fullest, coming across as exactly the type of music one may expect to hear in a coffee shop, supernatural or not.

About the only complaint I actually have in this area is the pacing. Not the pacing of the overall story, as things are executed well there, as our gang in the Terminal find the stakes getting ramped up as they prepare for one last Hail Mary in order to solve their current issues, but rather the pacing from scene to scene. Given how the game is presented, and how things play out with the player having to click to advance each part, you get the occasional awkward moment where you may not know how long to keep a scene going for the full effect or if there’s something that should happen in it. So you can find yourself lingering before you realize you need to move on one too many times, including during transitions with black screens. A minor issue, but a frequent one. 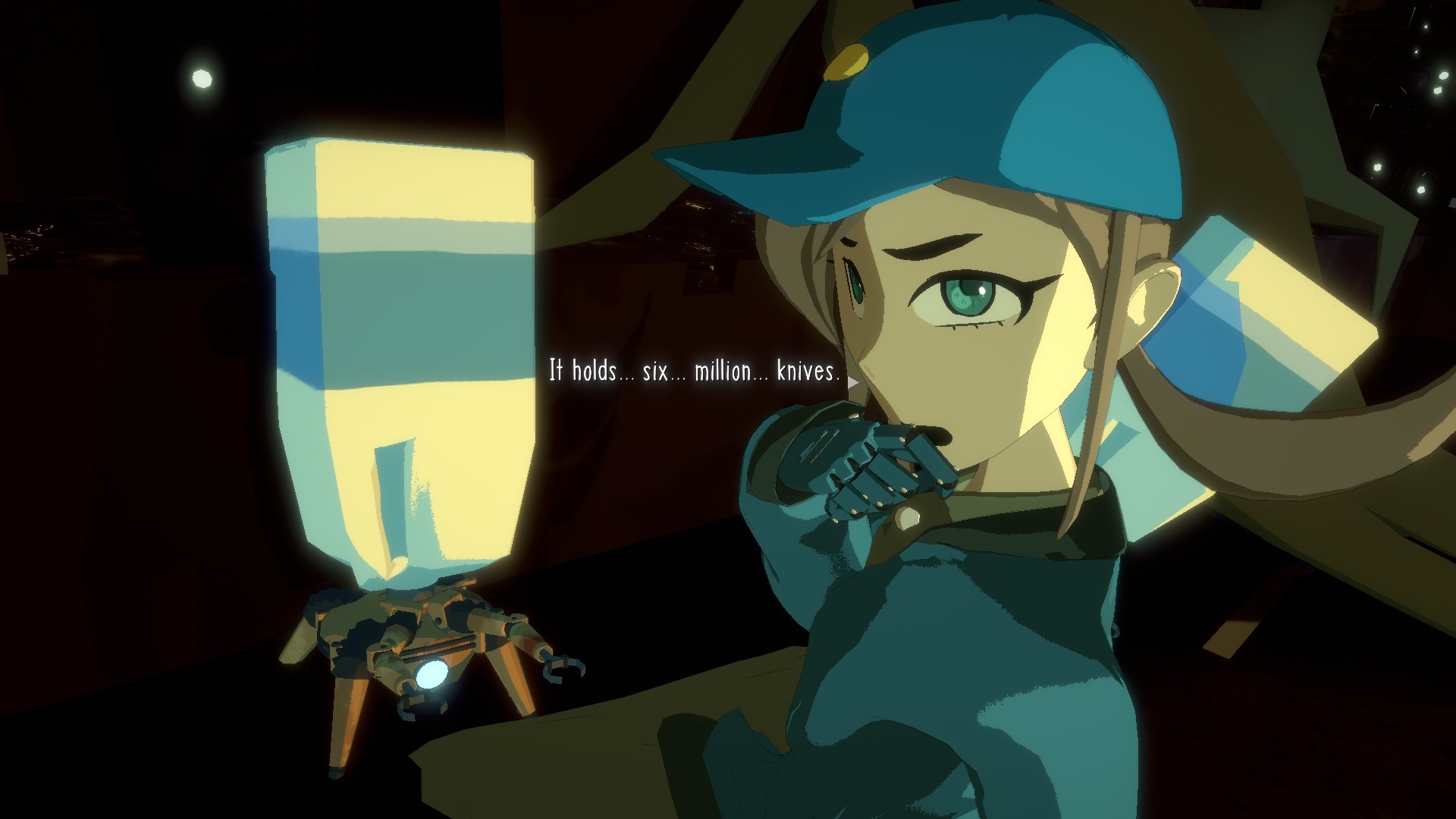 There’s more to Necrobarista besides the main story, though. After all, I did mention one notable element of gameplay a while back, as well as the fact that you get to freely explore the Terminal in between chapters. New rooms get opened up with each chapter and each one has little memories/side stories told in text form that you can unlock by interacting with various objects strewn about…but to unlock them, you need fragments. Part of the framing device is that you’re a mysterious figure regaining their memories by going through the story. And in the story, certain words highlighted in yellow may appear. Click them and you get a little piece of flavor text providing a little more info about what it means, and then at the end of each chapter, you select up to seven of these words, each giving you a fragment.

The catch is that each memory needs to be unlocked with a combo of three different types of fragments and they come in twelve different types. The catch is trying to remember the flavor text and figure out what words correspond to each fragment type. Or just go with your gut and choose whichever ones sound more interesting. It’s a fun addition and even adds a nice little puzzle element as you try to decode each fragment and manage which ones to spend on what could be the more interesting stories (with some even being multi-parters). But certain fragments are particularly tricky. Sure, figuring out character-specific fragments is easy, and ones related to “Food” or “Melbourne” can be easy as well, but you’d be surprised how tough ones like Lore fragments can be to find, especially since they seem to overlap with Magic fragments. And Lore fragments seem to lead to many more better tales, at least in my opinion.

If picking and utilizing fragments sounds a bit tricky, though, then don’t worry, because you actually don’t need to unlock memories to beat the game (save for a few given for free). In fact you can even get all the achievements without them. You’re free to just sit back and enjoy the main story if you like, letting it play out without any bits where you pause to grab a word. It’s recommended that you go for the fragments, though, since the memories you get lead to more entertaining tales and glimpses into the world of the Terminal and its current inhabitants. It also allows for a lengthier game, clocking in at a few hours if you try to go for every memory you can. This does mean that the main story is indeed a bit on the short side, and while Necrobarista left me wanting to stay in the Terminal even further, it was still a fun little treat overall. 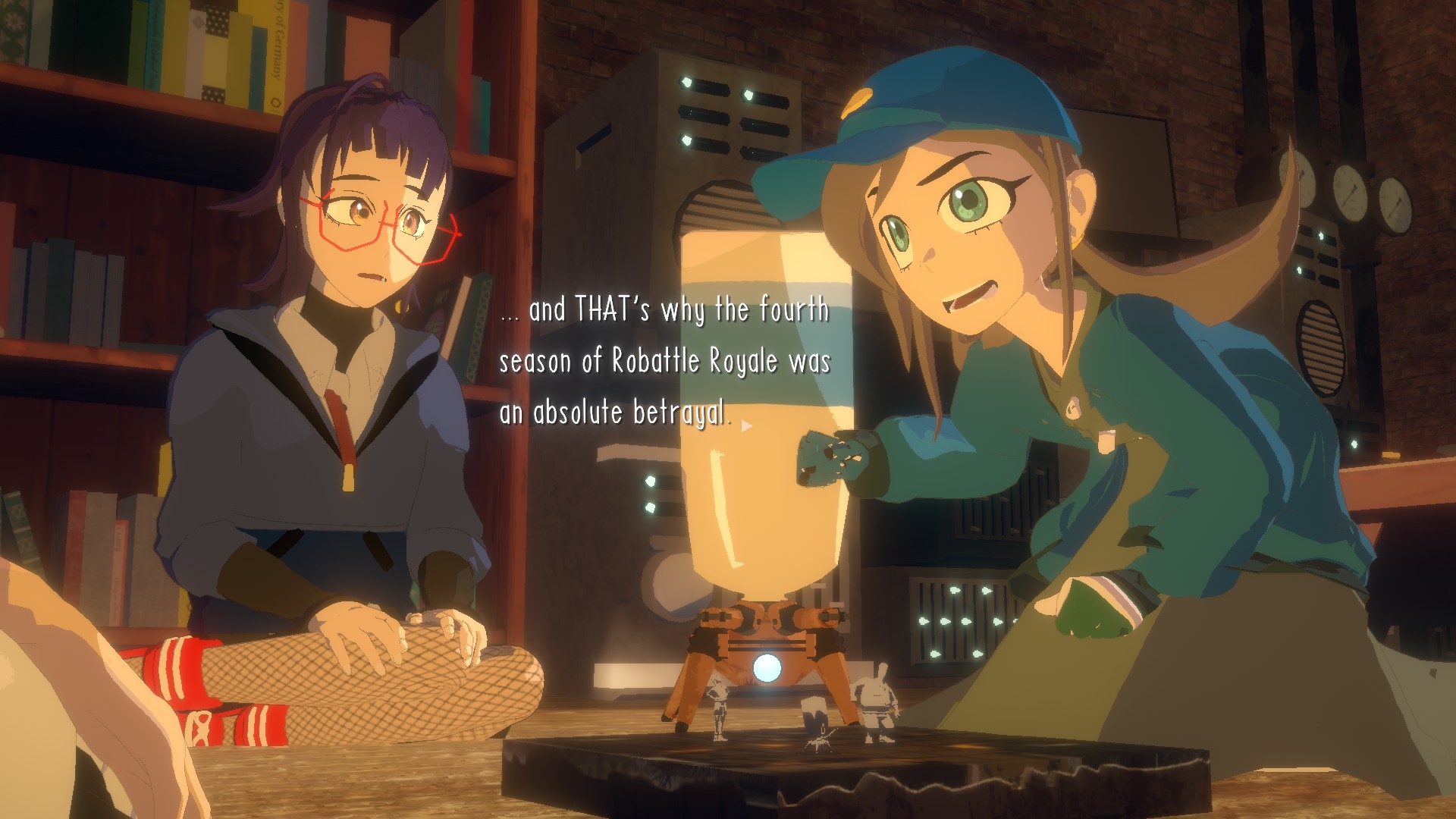 Necrobarista may have changed since it was first seen, but the end result is still an engrossing visual novel that succeeds thanks to a cast of memorable and fun characters, a stylish and cool presentation, and a well-crafted story that hits all the right notes, providing a terrific tale of having to move on that has room for bits of both laughter and tears in your coffee. Despite a few hiccups along the way, it’s an adventure that was both worth the wait and visiting the Terminal for.