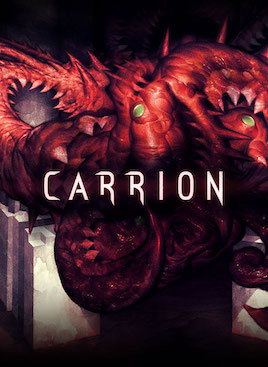 For all the valid arguments there are in story being secondary to gameplay, you can’t help but come away from Carrion and suspect more investment on the narrative and world-building side may have bolstered things. Though to be frank, the lack of a meaningful story element is, unfortunately, one of a handful of gripes that prevent developer Phobia Game Studio’s latest from reaching the coveted echelon of brilliance. A hallmark that has so often been emblematic of anything brandishing the Devolver Digital name on the publishing side of things. A publisher whose games have been so consistently high quality, it’s partly the reason why the very name causes so many to sit up and take notice. Perhaps offering more notice than that which the individual games should rightly receive more of. And while it should never be by the grace of a publisher where praise should be shared, if one is to take anything away from a game like this, it’s that the assumption of greatness doesn’t always ring true.

In a way, Carrion is uncannily reminiscent of last year’s Katana Zero — a fellow Devolver compatriot — albeit the end result is in fact the inverse. Where 2019’s neon-noir, bullet-time scroller was a case of worrisome repetition saved by its backdrop, Carrion on the other-hand manages just enough on its front-end elements for its prime concept to avoid falling entirely flat beyond its blindly-fast first hour or so. Admittedly, Carrion is likely to be one of the breezier and briefer releases of 2020. Weighing in at around four to five hours average to beat, extended to a possible six to achieve all collectibles in reach. But if your first thought is one of disappointment at such a short timespan, don’t be. Short in length it might be, it’s one of the better examples wherein a tight, short-but-sweet execution on premise manages to win out.

Even if the elation mid-game is one of a creeping, if never materializing, suspicion of eventual boredom — rather than some absolute joy at a concept executed to perfection. The reason for this lies primarily in the weird shying away from committing to or even expanding upon the metroidvania implication its environments are so quickly and so obviously wanting the player to brandish without a second thought. Yes, there are moments of retracing one’s steps, returning to previous parts and a moment near the end (again, without spoiling) that will delight those paying close attention. But Carrion seems to have almost retrofitted this design approach, rather than carefully, organically, build into the progression of the game. Rarely does the world Carrion want to propose feel like one built around curious exploration. Or that its structure is some winding labyrinth to discover and subsequently receive many a eureka moment over. There are upgrades to acquire too, but their placement feels more like a substitute for checkpoints, rather than a tucked-away solution to one’s most recent conundrum. 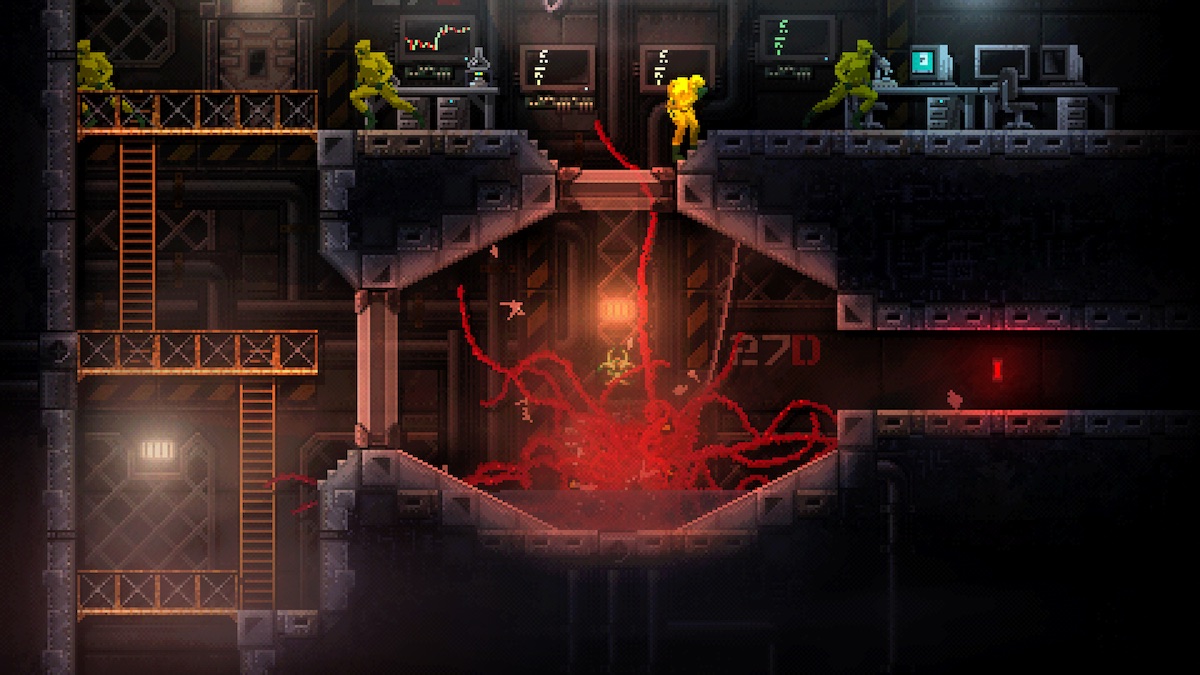 Maybe it’s more the focus on combat set-pieces — the familiar set-up of deciding to go in guns (or in this case tentacles) blazing, or to approach things more stealthily — where the conclusion on such a watered-down treatment, stems from. Regardless, that doesn’t stop the risk the game poses from feeling in anyway like it’s non-existent. The one factor you can see with Carrion in these moments is that despite the reverse-role set-up — that you are in fact the monster tricking your victims into a false sense of security — the game still makes sure to plant the notion of accomplishment squarely in the player’s court. Regardless of whether the vulnerable human you’re targeting is armed or not. Of course, those humans that are indeed armed with deadly firearms and front-facing shields means players will at some point find themselves diving into more of a tactical use of movement.

Initially the juxtapose from fluidly sailing from one area to the next to having to carefully sneak one’s way around corners as to not get shot may seem perplexing. But Carrion makes this work by having you, the monster, in as much a vulnerable state as the very humans you’re trying to pick off. Whether that’s catching fire — to which the only way in preventing death means rushing back to a nearby body of water — or in how easily bullets can eat away at your health meter. On top of that, the only way to recover lost health is by devouring any nearby humans, dead or otherwise. Of which, in some scenarios, requires you to put yourself back in possible harm’s way, for the sake of survival. Where some may think the balancing-out of vulnerability is at odds with the premise, it’s actually a rather sensible choice that results in later encounters requiring more of a careful plotting-out of who to target and when. 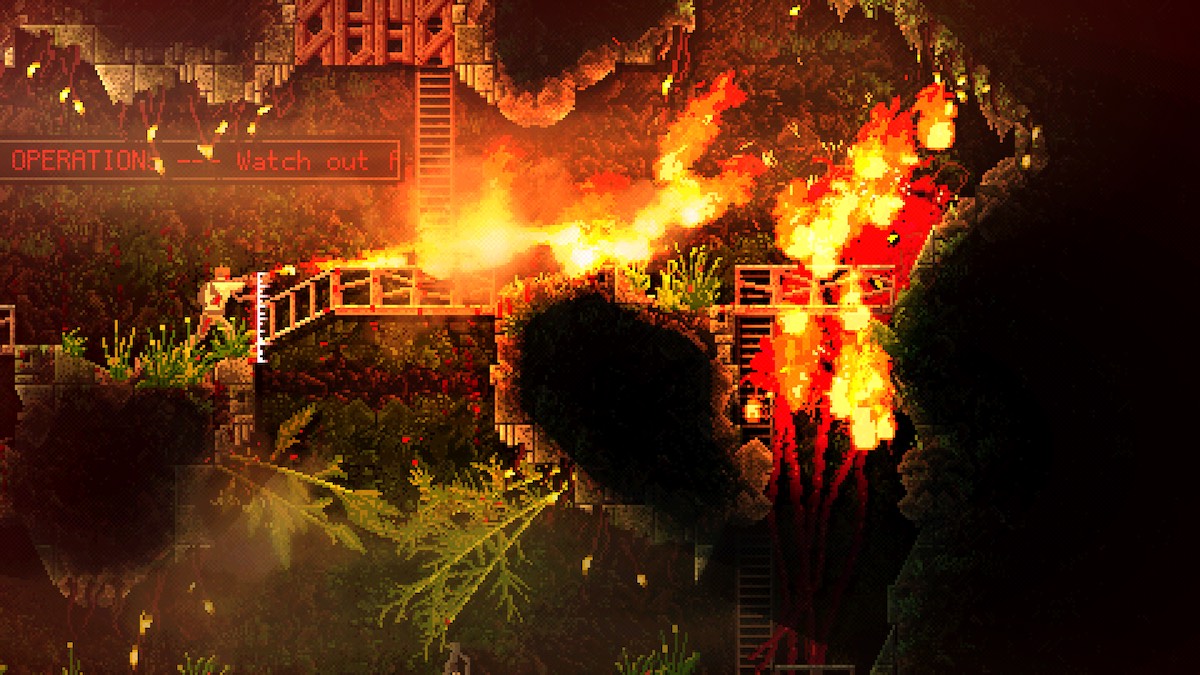 The only problem with these moments — though it’s not the only point in the game where such a frustration can pop up — lies in the way controls are handled. Namely the means at which players are required to reach out and latch at the objects they hope to grab with their many-tentacled form. While it doesn’t flat-out ruin these segments by any stretch, it’s not a perfect system either. Particularly when it comes to the point of conceding to just mindlessly flicking the analog stick in any direction — still ultimately finding the means to successfully kill a human target or two. If it were not for the detail poured into both the pixel art as much the sound design — specifically that related to your monstrous character particularly — the way the game seems to undermine its very controls may have been a larger hindrance.

Fortunately, to counter this, there’s a great many subtleties and nuances to catch onto when it comes to the smaller detail in Carrion. The way environments get slathered in red the more you move about; the way the game represents your continued journey of corrupting and infesting the world around you. The sounds of tentacles latching onto walls and ceilings, as much the hideous crunch as you devour another half-human body. Even the way certain colors are over-saturated to the point of ridiculous intensity; this latter artistic choice should in fact be a knock against. Yet Carrion‘s commanding of tone and animation works splendidly for the writhing, grotesque tone painted. Even if the gameplay scenarios presented aren’t the most original by contrast. Having to scout a set number of points so as to break down a later doorway, a loop that quickly grows stale and sadly hardly deviates. 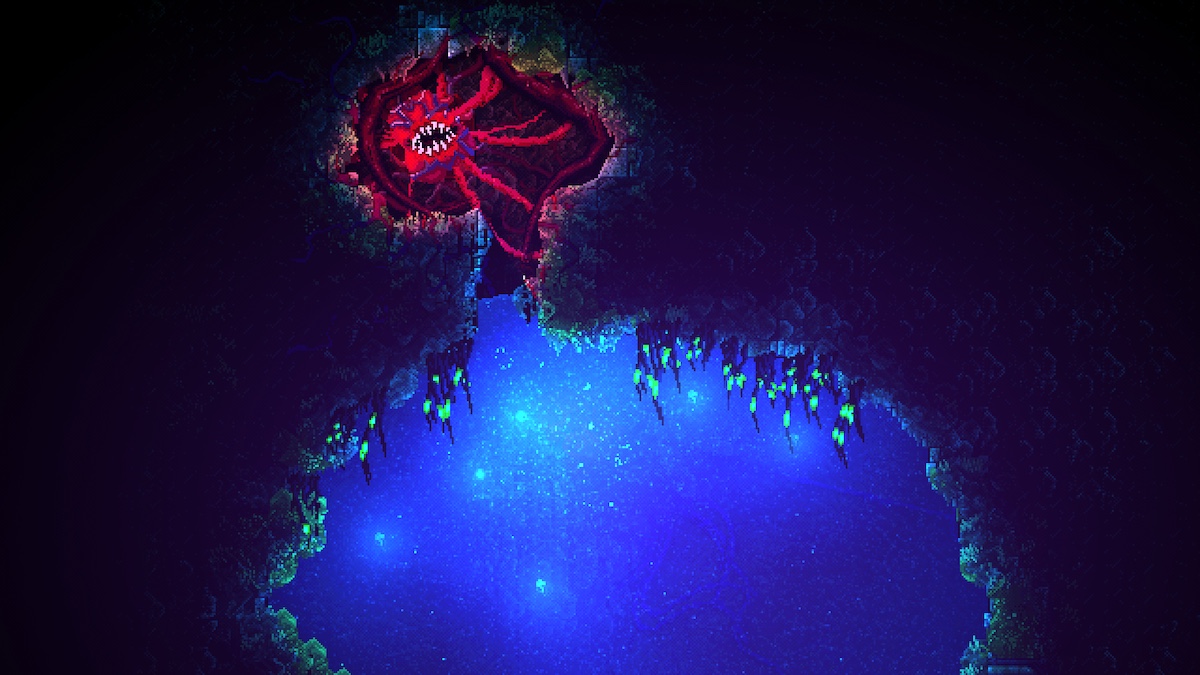 There’s plenty that Carrion gets right beyond the fluidity and attention to detail its horrific, blood-red monstrosity is given. Maybe it’s that very dedication for that which lies beyond the surface where Phobia Game Studio will score a plentiful number of admirers. That’s not to say both the environmental and set-piece variety aren’t as much a sign of proper dedication either. But in a game whose suggestion of curiosity and exploration is exactly that, a suggestion, you can’t help but wish the game had maybe invested more in the world it’s trying to allude towards. But it’s this very refusal where Carrion, unfortunately, stops short of reaching greater heights. Even so, despite the short length and minor replayability factor, it’s still a cleverly-concentrated experience. One that wastes little time on padding, even if it means its more repetitive segments are more visible to spot. It may not be firing on all cylinders, but Carrion‘s frantic, do-or-die action mixed with pleasant strides in its aesthetic make for an odd yet entertaining few hours.