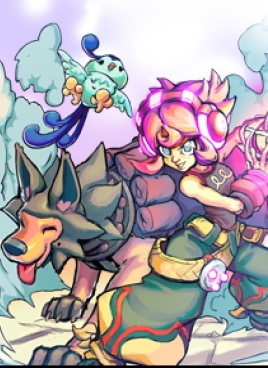 Fae Tactics: The Girl Who Destroyed the World has been in the works for a while, but it wasn’t until the demo was released a few months before release that hype seemed to crystallize for it. There have been a lot of tactical RPGs, but few that use the old Ogre Battle/Final Fantasy Tactics-esque isometric viewpoint. It’s somewhat fallen out of favor in the modern-day XCOM world and while there have been some portable games that try that style such as the Mercenaries Wings series, PC players have been left out in the cold. Thankfully, Fae Tactics aims to change that with one of the most lively and vibrant tactical RPGs on the market.

Fae Tactics‘ setting also helps it stand out. While you still have things like magic, spells and monsters to deal with, the action takes place in a more realistic world. So many games, whether they’re Final Fantasy Tactics, Tactics Ogre or the Mercenaries Wings series use royal settings and after a while, it gets a bit tiresome. Here, you do have some similarities when it comes to outdoor settings — but how the environment is used is different and there are more realistic areas like homes being thrown in the mix that make it feel like battles are taking place in a living, breathing world and not just on a series of stage sets.

The cast of playable characters is diverse — even at the earliest stages. Peony is a young magic users and beyond having the ability to attack up close and afar, she’s able to help allies with healing and stat boosts. She’s versatile and the primary character in the game who everyone else revolves around to some degree. Her dog Chico is going to be your primary damage sponge and can dole out a lot of damage quickly — especially as you level him up with critical kills. Keeping him healthy allows you to do a lot of damage quickly if you start battles out with him, while your long-range water-based ally Payachin is able to massacre enemies in short order. 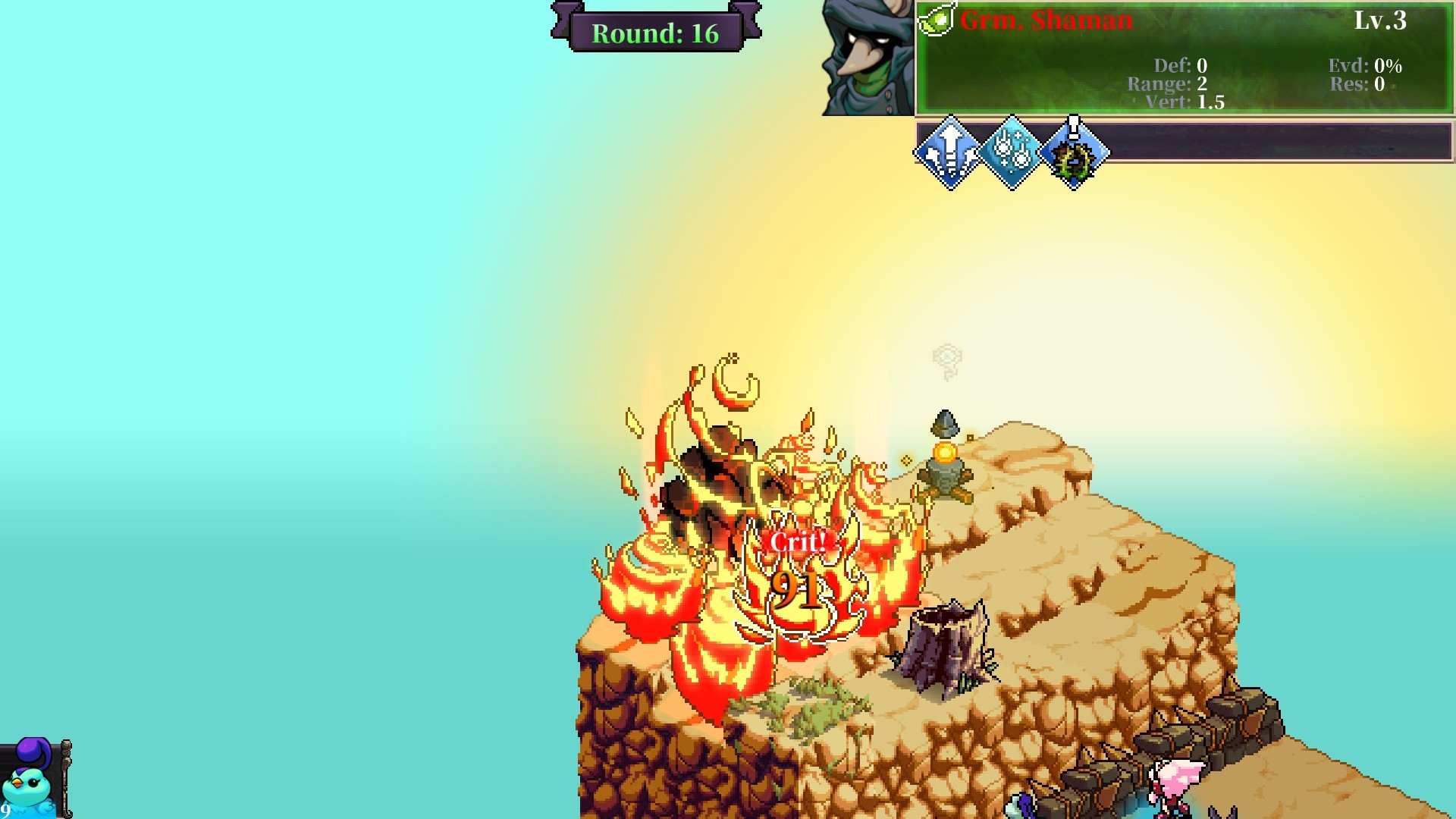 Elemental attacks play a key part in efficient progression, or defeat if you aren’t careful, and using him to stay in water and either grab items or attack from afar with water bomb-esque attacks is smart. He can’t take a ton of damage, but is the best long-range fighter early on and allows you to take out enemies in a single turn if you’re lucky and they’re weak to water damage. One great quality of life feature in Fae Tactics is you do get a runthrough before an attack goes through of not only enemy weakness, but also the percentage chance of the attack hitting. So if you have a 60% chance of hitting an enemy, but can reposition and help an ally, it may be best to help the ally close-by and then be nearby for that ally’s attack of an enemy.

Doing so will allow you to land a combo attack that doesn’t count against your ally’s turn counter and is another effective way to do massive damage in a short timeframe. Proper troop placement is key, because going with a long-range attack and then putting a melee-based character near the enemy ensures a double-dose attack like this and that can take folks out in one turn if you’re lucky. You can also have NPC allies in battle do a ton of damage, but you have to be mindful of their strengths and weaknesses. You can’t rely on them a lot because if they get locked up either in a vine trap or encased in ice and you’re using them as primary attackers, you’ll be out of luck.

The battlefields are diverse and require you to pay close attention to everything. Having item drops on the field is nice, but there’s a risk/reward element to them. If you can get an item, but doing so puts a character that is vulnerable to fire near a fire-based enemy, is it worth possibly risking that troop to get the quick pickup? Whatever health they’ll gain back may be lost — but if they’re too close to the enemy to move away fully anyway, it may be a risk worth taking as it can keep them around for another turn. Troop death in most battles is something to be concerned with — but it isn’t something you need to worry about until boss battles roll around. There, you can’t lose any of your playable characters or else it’s game over. 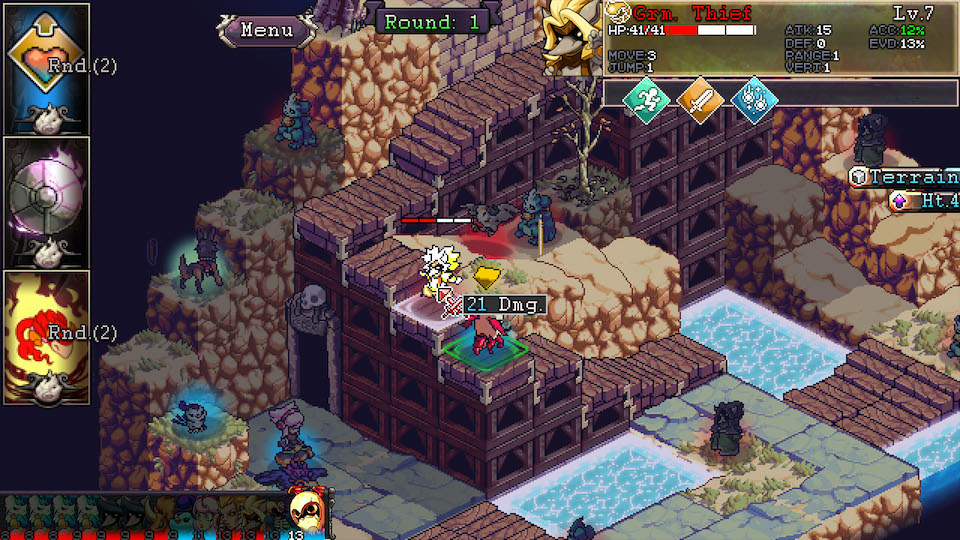 Fortunately, this just means you’ll have to replay a single battle — even in a multi-stage setup — but it still makes you think more about how to attack and the importance of a good defense. You can’t get cocky because all it takes is a boss putting up an elemental protection tower to screw your plans up. Those ensure that enemies don’t truly take damage and only the tower takes a small amount, so you wind up having to focus all of your attention on the tower to deal out damage to the boss and troops. Sometimes, focusing on the boss is smart and other times, you need to take out some troops to minimize your own team’s damage to ensure that you can survive to make it to the boss to attack them. There’s nothing quite like a long, hard-fought battle and then eeking out a victory by taking out a boss in one whole turn thanks to properly taking out their troops.

The battle system is a lot of fun and it has a learning curve to it — but it’s a far one. You’re eased into every major mechanic early on and then you learn on your own how to put all of the puzzle pieces together. It’s rewarding and makes even tough losses enjoyable because you can just re-assess things and change your pre-battle loadout. If one summon doesn’t work well, try another and see if they’re more effective in the given environment. Trial and error may seem like a hassle, but it works nicely at making you a better player here and ensuring that a past defeat doesn’t turn into future losses because you’ll take little mental notes of what worked and what didn’t as time goes on. 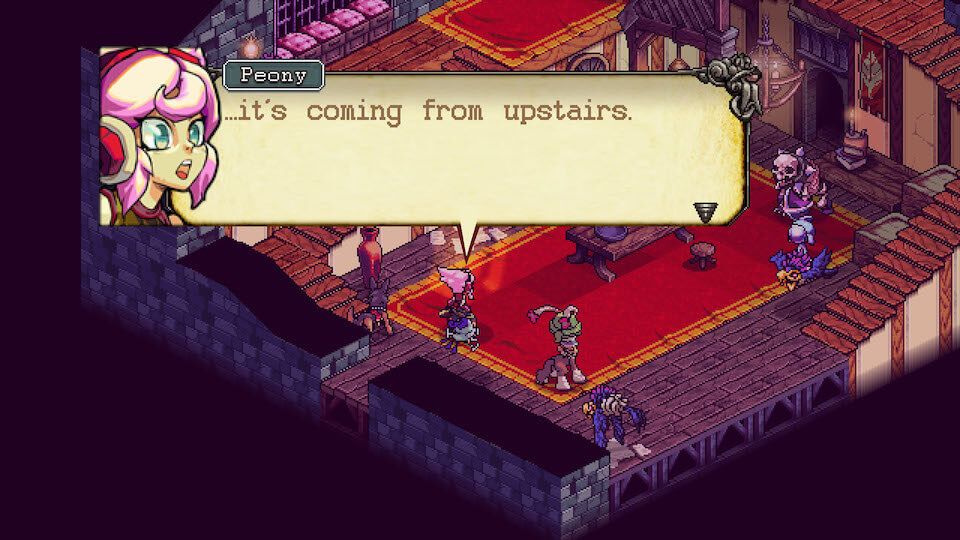 Fae Tactics is visually stunning. Outside of not being able to rotate the battlefield, which is a common problem in modern-day SRPGs as the Mercenaries Winges games also suffer from it, there isn’t a major issue to be had with the graphics. The world itself looks realistic and down-trodden to fit its setting, while the skies and characters themselves are bathed in just about every color imaginable. Battle animations are robust for the genre and things like physical attacks have a surprising amount of weight to them — which is amplified when you either hit or are hit with shots that send you back on the field.

The soundtrack is also a joy to listen to. It’s got the right blend of whimsy and terror when it needs to, while still keeping the road trip-like vibe intact throughout most of it. No matter how dire the situation, the music will let you know that things can always get better. The sound effect work is also impressive, with each elemental attack gaining extra levels of audio oomph as you level them up and become stronger. The only issue with the soundtrack is that while good, it doesn’t stay stuck in your head after the fact. 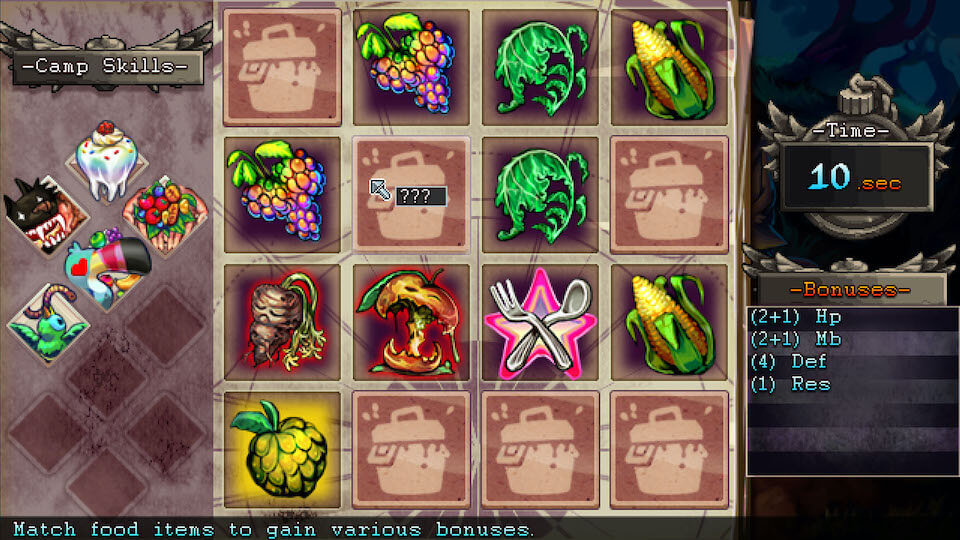 Fae Tactics: The Girl Who Destroyed the World is a top-notch tactical RPG and one that any longtime fan of the genre should check out. It’s great for veterans as the bright setting is unlike anything on the market today, while lapsed fans will want to try it to fall back in love with the genre. If you’re a newcomer to tactical RPGs, it does a fantastic job of easing you into the core mechanics of combat and makes it a fun story to see unfold with each battle. Having various risk/rewards systems in place encourages bold play and helps keep things fresh too. It’s a great looking and playing game with a strong soundtrack.