The gaming industry is not lacking for 2D side-scrolling platformers. We have a sea of 8-bit and 16-bit-inspired games alongside new actual games using 16-bit hardware. While the market ages out of those eras being nostalgia mines, however, we have a newer cottage industry for games that use the 32-bit era as their what if scenario. We’ve seen horror games try to limit themselves to PS1 visuals and games like BallisticNG provide things like fan successors to popular games of that era. We haven’t seen many 2D platformers go for a rich 32-bit art style and in many ways it has left that genre looking inferior in terms of visual progress. Comparing many modern platformers to even games like Astal visually isn’t kind to the modern era – and when we see 25 years of technology evolve in ways we never could’ve imagined in 1995, that seems absurd.

Kaze and the Wild Masks aims to not only use the 32-bit era as a source of visual inspiration as its lush colors pop just like the best 2D games of that era, but evolve past it. The game feel of things from ’95 is different to what we expect in a modern-day game and Kaze manages to blend the visuals of a game that could have in theory been released then with lower resolutions and detail and a game that plays as smooth as the best platformers on the market now. The premise is a unique one and keeps the action fresh stage to stage. What’s most impressive is just how much versatility is shown off in just the first set of stages playable via the Summer Games Event demo. 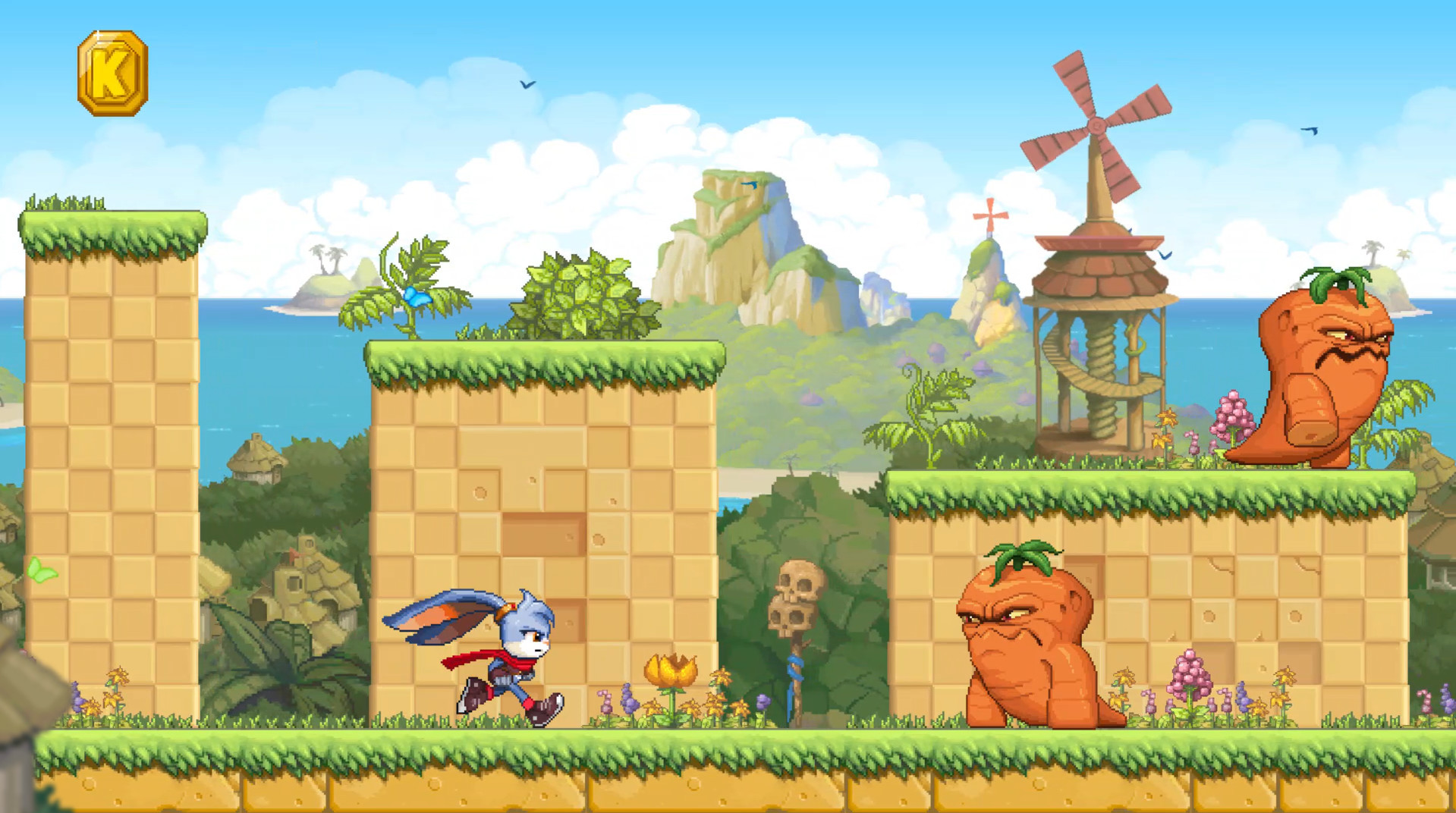 From the moment the game boots up and you see the “Winners Don’t Use Drugs!”-inspired bit, veteran gamers are transported back the ’90s while newcomers are probably a bit puzzled unless they’ve seen the same notice pop up on MAME. From there, a cutscene introduces the cast and we get an action-based hop and bop. In the green and tan-filled opening stage, you can either hop on foes to take them out or spin into them a bit like the sidce-scrolling Crash Bandicoot stages. The enemies are already a bit nutty as you’ll fight things like a giant walking carrot and wonder just what’s going on with the vegetation in this world to cause such a thing. Exploration is encouraged as you’ll see a few areas that seem inaccessible until you use some fancy platforming and find goodies.

Depending on your search, you may find more little gems to help your completion total or be teleported to a bonus stage to get all the little gems or topple all enemies. Each area has two bonus stages, so exploration in every stage is encouraged — but sometimes not all that possible on the first attempt. The key to how the game is designed is that stage one will usually result in you getting all of the completion rewards and just seeing the game tally everything up at the end of the stage by filling in all these blank spaces makes you want to do it again in each area. It makes the game itself more rewarding to play and thus you’ll spend more time with it just to complete things. 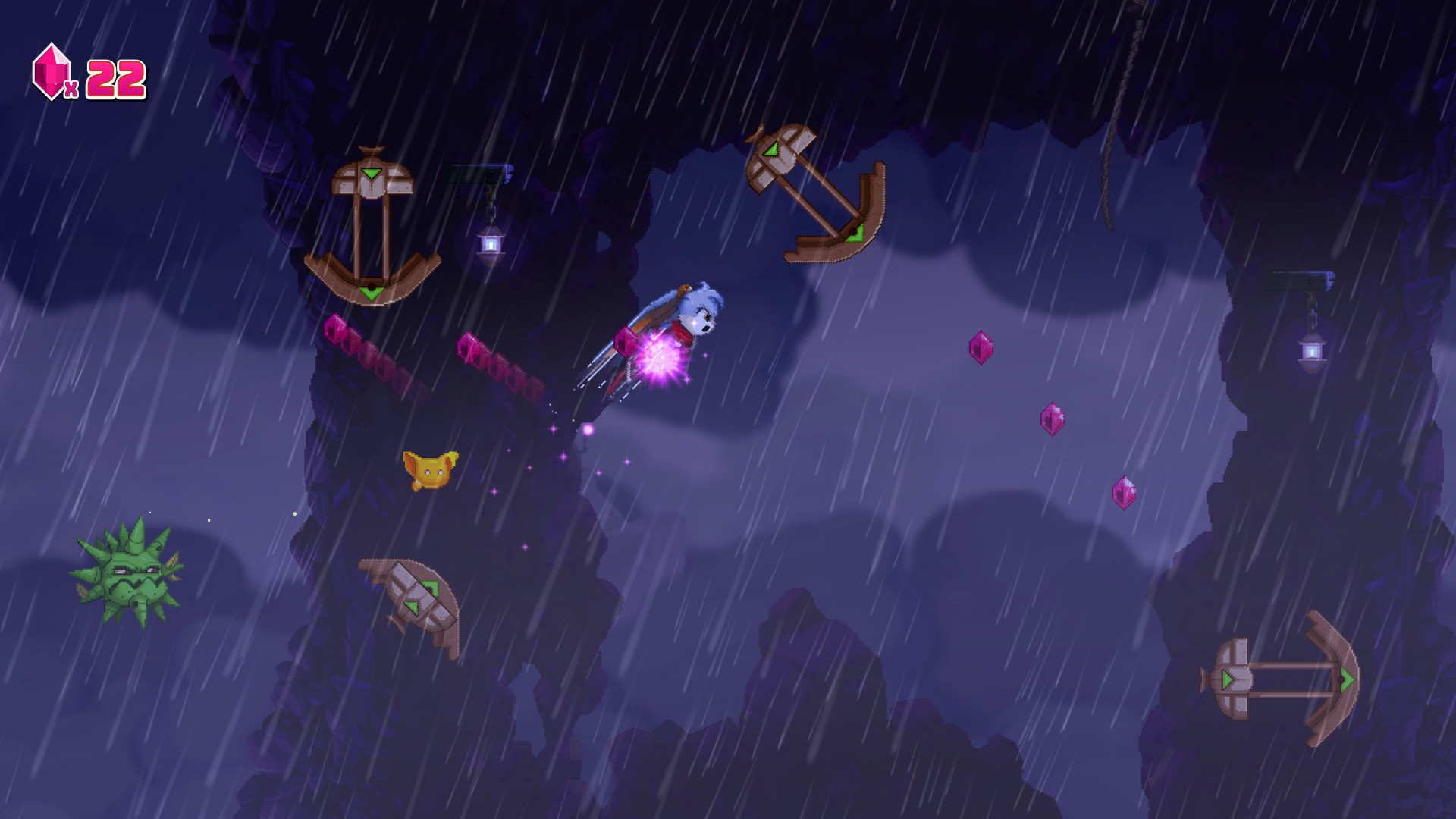 Personally, I didn’t worry so much about getting all of the gems, but I did obsess over getting all of the bonus stage rewards. Those are great because you can replay them as much as you need to in order to succeed. Sometimes, it’s best to just pack it in and try again later with a clear head, but when you’re one enemy away from winning the stage, you can’t do that. You just know in your head that you need one more chance to do it and if you’re lucky, that will pan out. It’s surprisingly addictive and as someone who hasn’t had a collect-a-thon mentality for platformers since DKC 3 in ’96, I was surprised at how hooked I was to accomplish everything.

The game feel in Kaze’s earliest stages is impressive. Even there, you go from hop and bop to then using the various masks to do things like transform into a flying creature that attacks with arc shots – very much like Squawks in DKC 2. Underwater areas are normally a tough act in platformers, but here, the shark power-up gives you a sense of power and finesse that is usually lacking. You can use precision-platforming skills underwater to do things like avoid hazards and don’t have to worry about current dragging you around or messing up the physics while you evade things like massive missile blasts that add a touch of bullet hell avoidance to the mix too. 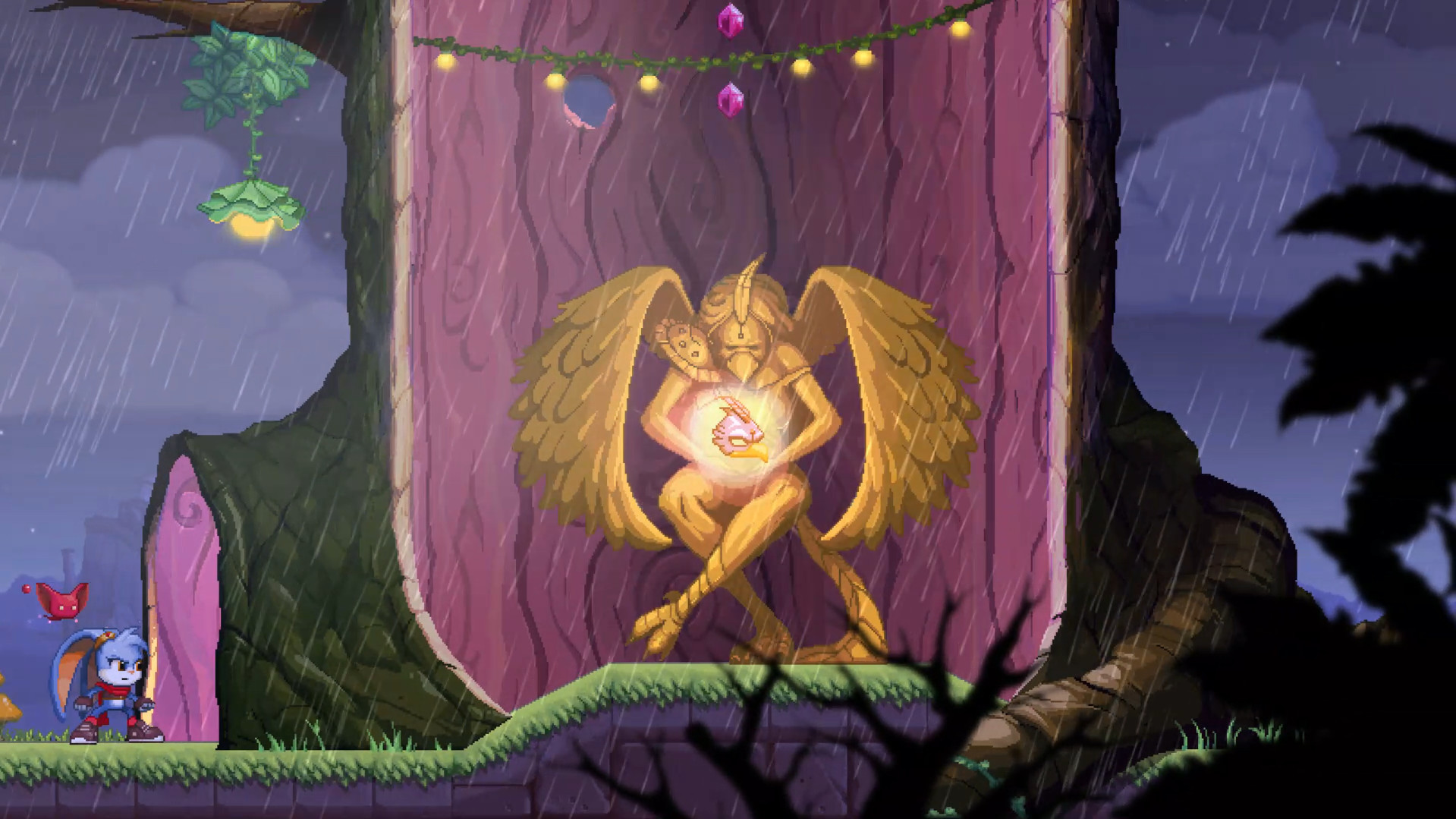 Even without power-ups, the in-game action feels natural thanks to perfect controls. In some platformers, there will be a small hitch in the reponsiveness that throws off your momentum. That isn’t the case in Kaze and it makes it a breeze to jump around or just use Kaze’s ears as a propeller to slow the descent and attack or land on a small platform. There are some barrel blast-esque sections that feel right out of Donkey Kong Country, but unlike Yooka-Laylee and the Impossible Lair, this goes beyond just a mere homage. Kaze plays like something that takes a lot of successful elements from other games, but adds a bit more challenge to them by throwing in things like the aforementioned bullet hell defense tactics to avoid damage.

The developers at Vox definitely loved some of the genre’s best games, but unlike a lot of games that just aim to pay homage to the past, they’ve crafted something that would’ve stood tall in the ’90s or any era. It’s a finely-tuned and polished game even with so little of it being playable in the demo. It already looks impressive too, with a ton of color in every stage. Bright stages give you a sense of hope, while dark stages can cover the world in rainfall and when combined with lightning in the background, it creates a foreboding atmosphere. Tiny touches like enemies making goofy faces as they’re blasted around the screen show how much work went into paying attention to the detail work of the in-game world. 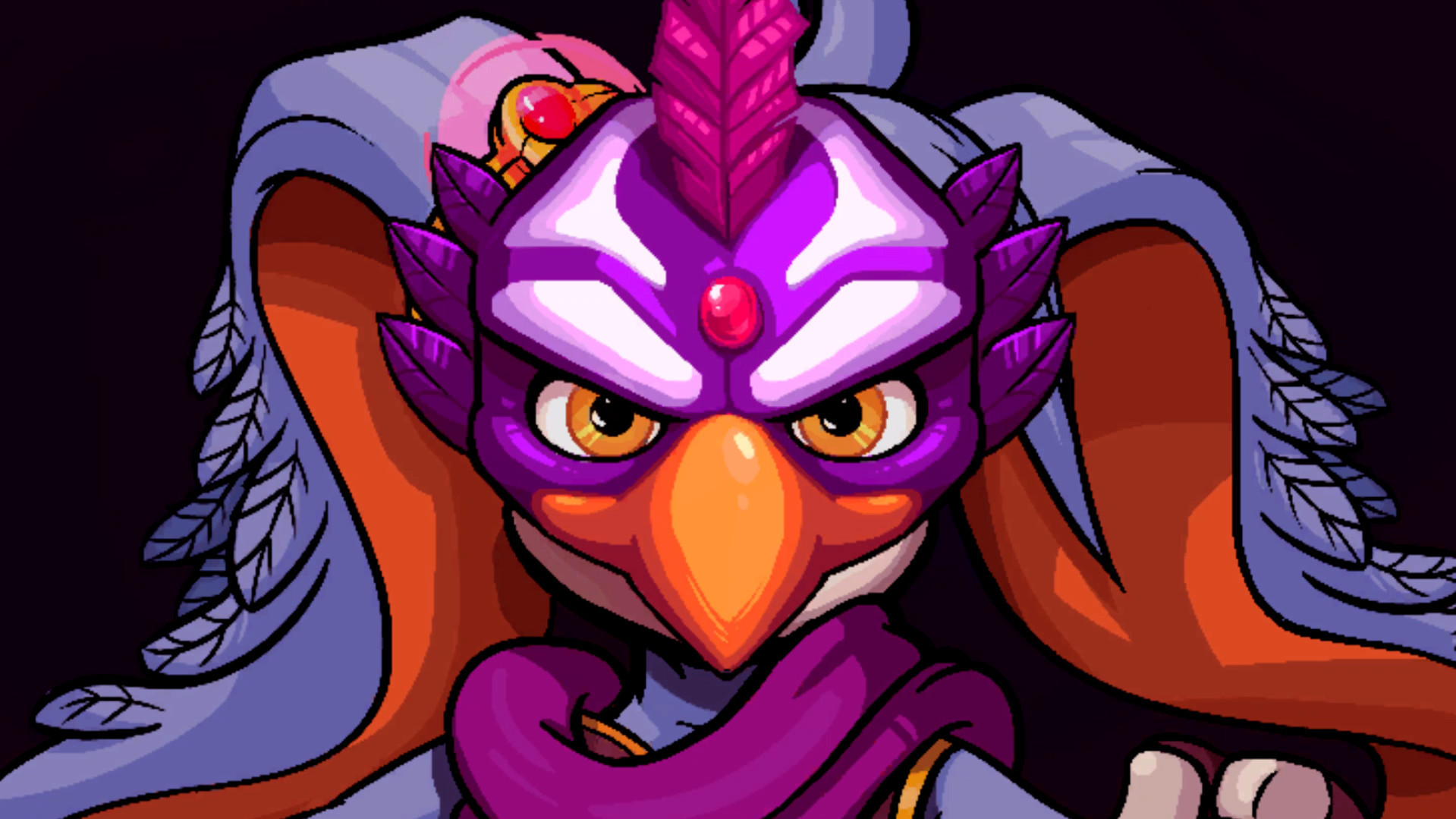 Kaze and the Wild Masks is on track for a 2020 release and looks like an absolute must-buy for any 2D platforming fans. It combines a lot of puzzle pieces from the genre’s best-ever games to create something all its own. It looks fantastic, plays great and offers up more gameplay variety than most thanks to the mask mechanics changing up things enough to where nothing ever wears thin. We’ll be keeping a close eye on it as the release draws closer and if the final product is even 5% better than the demo, it’ll be a top-shelf platformer.