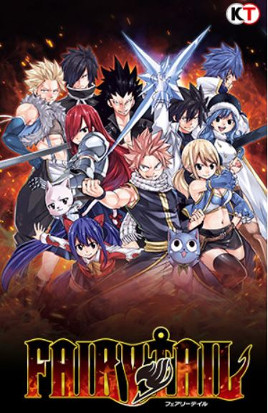 Like many other manga and anime properties, Fairy Tail is no stranger to video game adaptations. Its most recent incarnation is an RPG developed by Gust and published by Koei Tecmo which has generally been a winning combination historically when looking at games from Atelier and Nights of Azure series. Licensed properties are typically a mixed bag when it comes to gaming, since they have to walk the delicate tightrope of appealing to fans, staying true to the tone of the franchise and also creating an enjoyable game. The quality range of licensed properties ranges from amazing to out of control dumpster fire, so we’re going to see where Fairy Tail falls on that spectrum.

Fairy Tail begins with the members of the guild facing off against a powerful adversary that they have no hope of defeating in combat. Then a dragon appears, they have to cast some spell of protection and yada yada yada seven years have passed. The heroes who faced the dragon return to the Fairy Tail Guild only to find that over the past seven years the guild has fallen into complete disarray, falling at the absolute bottom of the rankings of the world’s 168 guilds. Not content with their guild being the laughing stock, our heroes set out to restore some prestige to Fairy Tail.

In order to make Fairy Tail feel like a more authentic adaptation of the source material the developers worked with Fairy Tail author Hiro Mashima to make sure it was a proper Fairy Tail experience. The game incorporates several story arcs including Tenrou Island, Grand Magic Games, Avatar and Tartaros. In these regards it seems like Gust did an ample amount of legwork to ensure that Fairy Tail fans will appreciate the game and accept it as part of its extended universe. The next question is how well it works as a game, both for fans and the uninitiated. 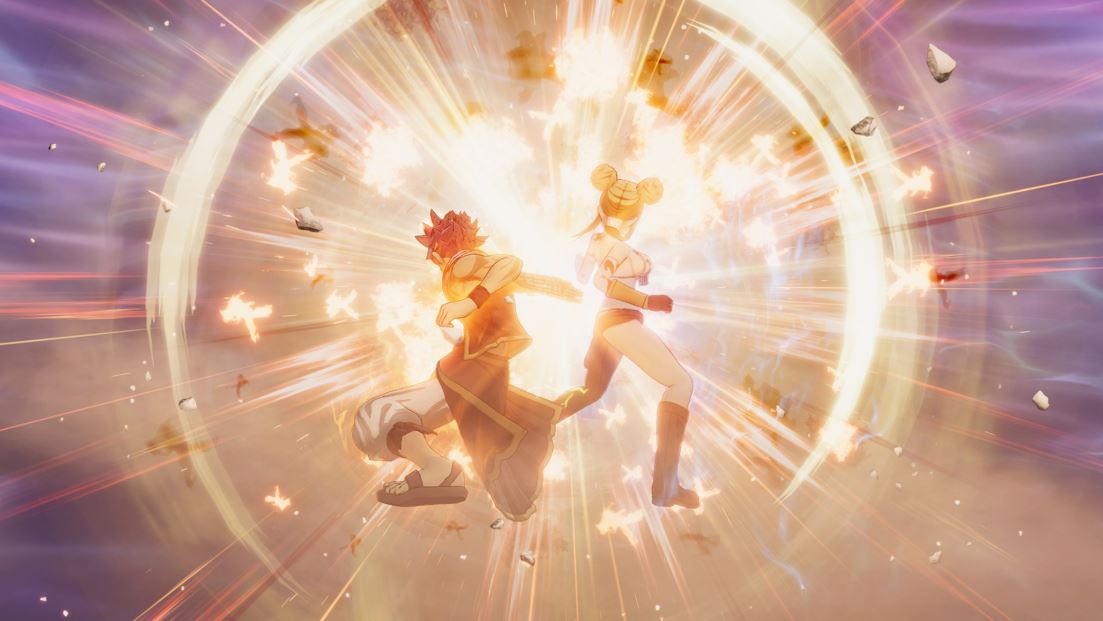 The short answer to that question is Fairy Tail actually translates into a good RPG. Because of the nature of many shonen mangas even though this is a brand new game it does have a certain element of deja vu to it. Themes of working together, friendship and a rag tag group of heroes triumphing over powerful evils are all present in Fairy Tail. This isn’t necessarily a bad thing, but it does follow a paint by numbers JRPG template and in many ways feeling similar to a mainline entry in the Atelier series.

The main objective seems to be increasing the guild rank and prestige which is done through progressing through the made story quests and completing quests from the request board. There’s other activities to keep the player busy such as finding items to upgrade and remodel features of the guild such as the item shop, completing story events with party members to increase bonds and doing random quests for citizens. Overall it’s a good balance of things, though some aspects are executed better than others.

A lot of request board and citizen favor quests do fall into the problem of boring repetition since the bulk of them boil down to kill x number of a certain monster or bring back x number of an item. The message board quests tend to be more interesting since they can shed some light on a character or offer benefits beyond a bunch of a jewels or lacrima fragment for a reward but the nature of them can get rather monotonous. Upgrading the remodeling the facilities at the guild unlocks passive bonuses for party members so there’s an incentive to do that, plus the NPCs at the guild house seem appreciative or your efforts which is always nice. 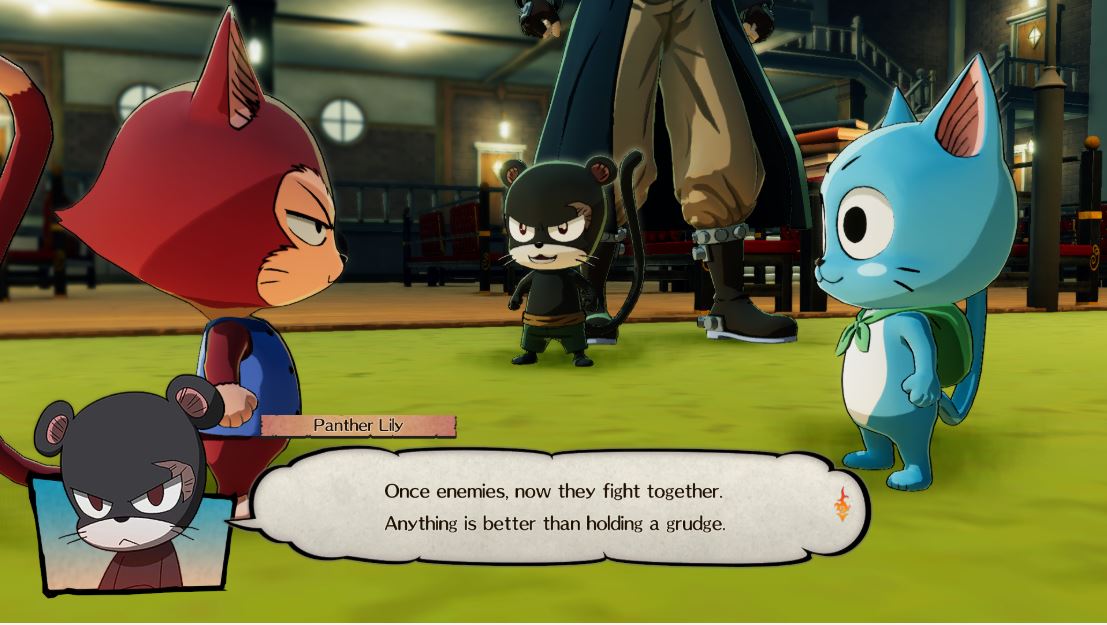 Getting into the main story quests is where Fairy Tail gets more interesting. The story’s progression leads to some interesting places and characters and some of the challenges are well executed where the player can actually feel a sense of accomplishment for overcoming an obstacle. There’s a lot of hand holding in the first several hours of the game with tutorials and smaller party size (three members) and available characters, but eventually the number of player characters increases to sixteen and the current party roster expands, making combat more strategic and interesting.

Battle is one of the areas where Fairy Tail excels. It’s turn-based tactical combat, where everyone is on a grid. Each character has a different set of attacks that align with different elements and target a certain area and shape of the grid. It’s not the most complex system devised, but does offer a greater strategic element than some other JRPGs. Increasing a character’s rank opens up more benefits to them and increasing bonds between characters can lead to stronger chain attacks in battle, so there’s incentive to switch up party members and take part in their story vignettes. Combat becomes more enjoyable as the game progresses and more options open up to the player, as there’s something satisfying about watching the different team members work together in battle.

On the technical end there weren’t any hiccups during the review process. The game ran smoothly with no framerate errors or slowdown and the load times were reasonable. The music is nothing spectacular, typical of the stuff you’d hear in this sort of game, but it’s generally catchy and fits the overall tone. The cel-shaded 3D characters models look great and the animation is fluid, though some it would be nice it there was an option to skip some of the longer battle animations as those tend to lose their luster after several dozen uses. 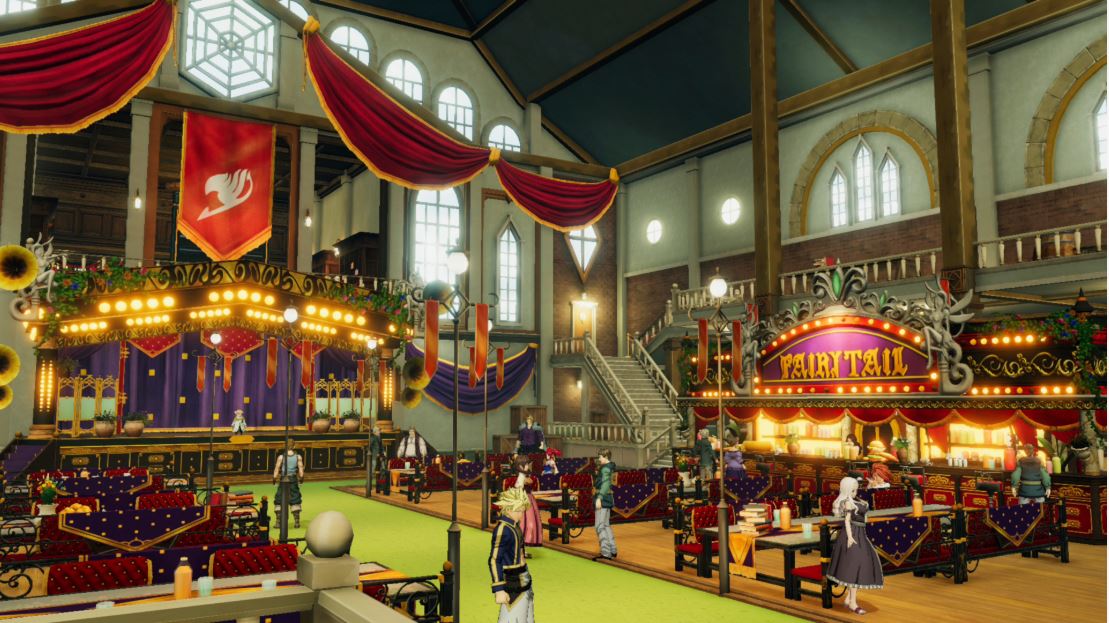 It’s apparent that a lot of work went into Fairy Tail to ensure that it’s something fans would embrace. While its target audience is obviously fans of Fairy Tail its pacing and mechanics provide an engaging enough experience where those unfamiliar with the franchise would still find it a worthwhile experience. Taken strictly on the merits of gameplay without taking the license into consideration, it’s a good though unremarkable JRPG. Side quests were abandoned a few chapters in due to their repetitive nature, but the main story and character side stories are interesting enough to keep the player engaged to completion.