After the disappointments that were Paper Mario: Sticker Star and Paper Mario: Color Splash, hopes were high that Nintendo would finally get the series back on track with Paper Mario: The Origami King. The game’s pre-release media displayed an interesting battle system and a large, pretty world. If the game could deliver on these, it would go a long way towards making up for past mistakes. The good news is that it does indeed deliver. The world of Paper Mario: The Origami King is indeed beautiful and interesting to explore, and its battle system does ask players to flex their brains a bit. The game doesn’t deliver on everything, though, so it still falls short of being the Paper Mario: TTYD sequel many older fans have been asking for.

The first point in Paper Mario: The Origami King’s favor is its world. It’s indeed pleasing to behold; Nintendo outdid itself with the papercraft aesthetic here, and there’s no taking that away from them. It also helps that there’s plenty to find and/or hunt down in each segment of it too. As he explores, Mario can find Toads folded into all-manner of interesting shapes, uncover hidden mini-games, stumble-upon various trophies and fill-in literal holes in his paper world. There are plenty of each of these to find, so the world wonderfully functional in addition to being downright pretty to look at. 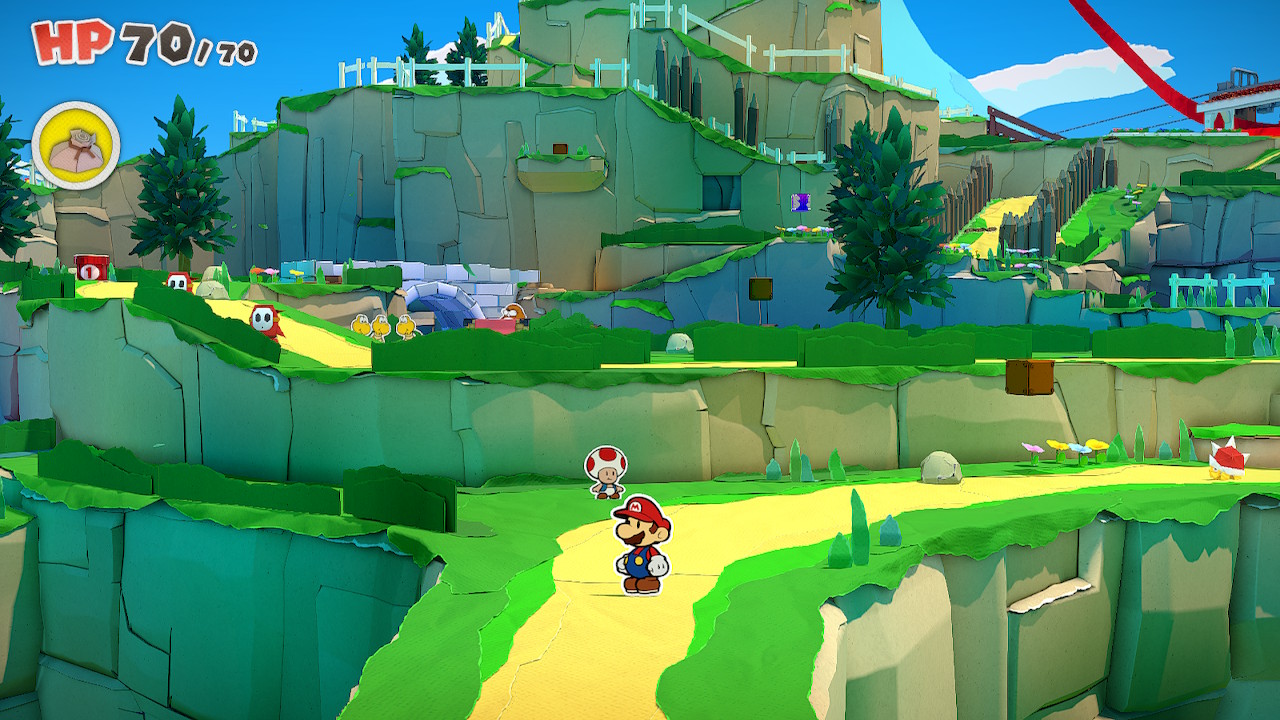 The Origami King’s battle system is also deserving of recognition. Presenting players with a little puzzle to solve at the start of each battle is a great way to keep it feeling interesting despite actually being simple. Consumable attacks are back in the game, but one doesn’t have to depend on them like in the last two games. They’re just another kind of situational item to be pulled out against certain enemies. It’s a decent system as is, but one can’t help but feel like it would be better if coins weren’t the only reward. Also, the ability to pay-off the crowd with coins tends to do away with any pretense of difficulty, so it’s probably better to pretend like it isn’t there.

Nintendo did well in shoring-up these weak points from the series’ most recent entries, but there are still a handful of elements holding Origami King back. The overemphasis of coins is one such issue. Mario is constantly being showered with coins, so frugal players will quickly find themselves with more than they know what to do with. This has the unfortunate effect of making normal battles feel optional and therefore tedious. Playing them out is interesting, but one would rather not bother if they don’t need the coins. 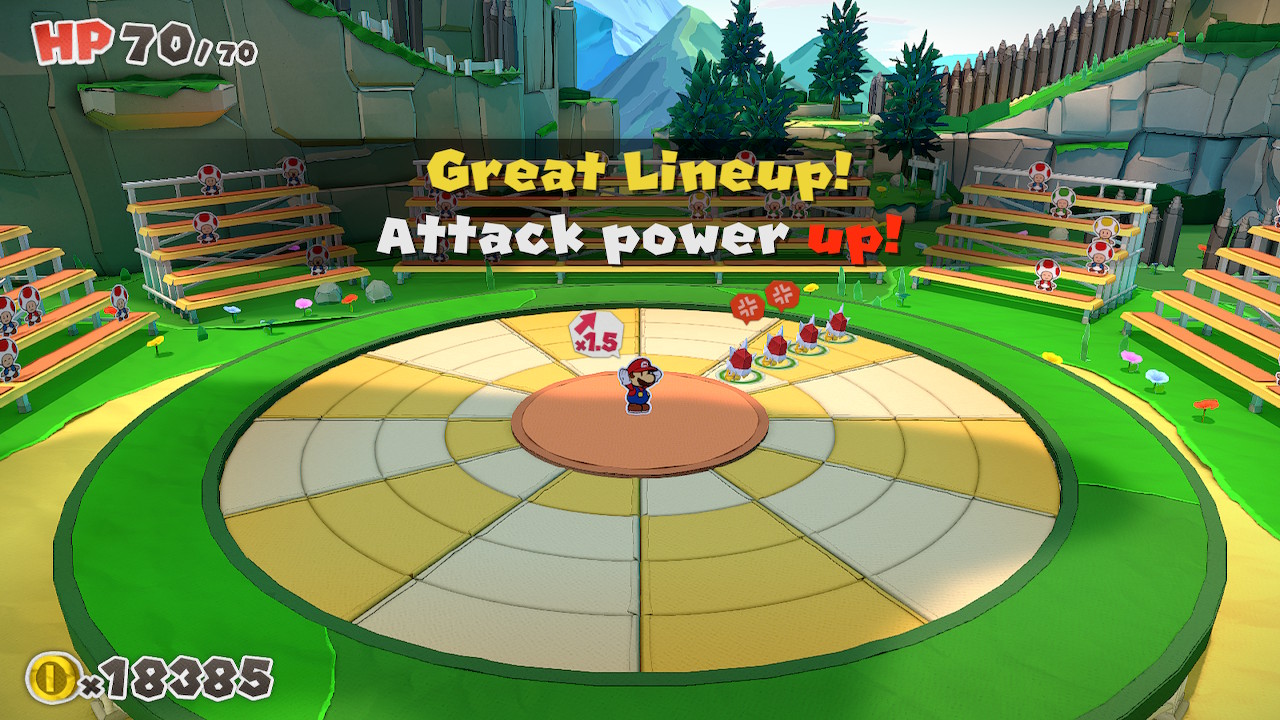 Tying most of Mario’s abilities to items also robs the game of its potential RPG depth. Sure there are useful accessories, but one still isn’t able to make character builds like they could in the first two games. This in turn robs the battle system of any long-term interest it might have had. Puzzles or not, fights can only stay interesting for so long when they’re conducted the same way almost every time. The same can unfortunately be said for the paper theme.

It’s not as if Origami King’s world eventually becomes boring to look at, not at all. Rather, the game has an annoying habit of constantly reminding the player that everything is indeed made of paper and that the characters are all very much aware of it. This doesn’t necessarily need to be a problem, but Origami King has an obsession with trying to constantly make the same joke about it. With some exceptions, many jokes boil down to “everything is paper, isn’t that silly?”, and that doesn’t stay funny for long. Mario’s main companion, Olivia, doesn’t help matters either. 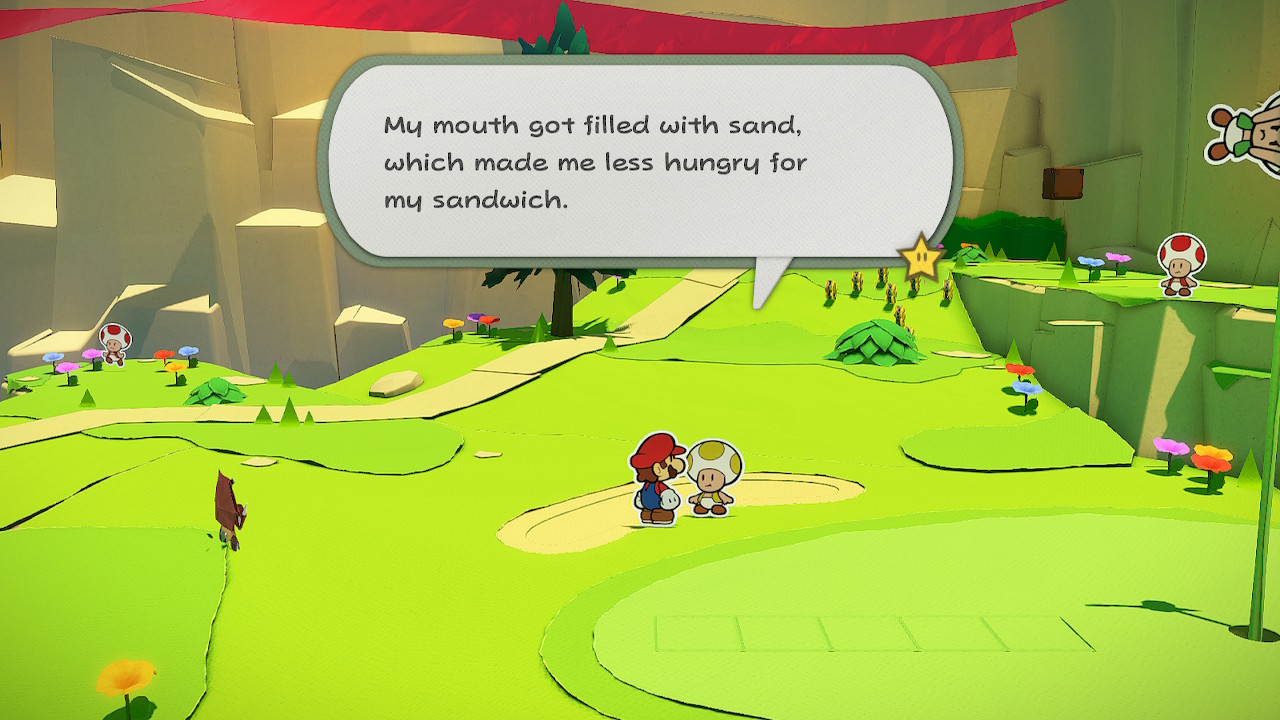 She functions in a manner similar to Goombario or Goombella from the first two games, providing extra information and opinions about various things. This would be fine, even welcome, if not for Olivia’s constant need to comment on whatever is going on and bringing gameplay to a grinding halt in the process; she’s basically Origami King’s version of Navi or Fi, and that’s rather disappointing since Nintendo should’ve learned their lesson about these sorts of characters by now. Olivia is also Mario’s only permanent companion too, so forget about forming a full party of interesting characters over the course of the adventure.

Make no mistake, Paper Mario: The Origami King is a decent game overall. The world is beautiful and filled with plenty of interesting things to find. Its battle system is mechanically interesting and the story itself is intriguing. There are annoyances, but players new to the series will likely have only a handful of things to complain about. Fans wishing to see a return to the heights of Paper Mario: TTYD will likely still be disappointed though. This isn’t Sticker Star or Color Splash, but the game is still much shallower than the series’ first two entries. Character builds and partners are still largely absent and the series’ trademark humor is much less subtle in this one. Paper Mario: The Origami King is a step in the right direction, but there’s still a ways to go.