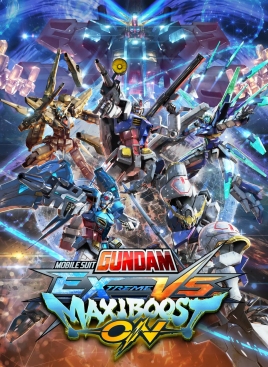 Let’s face it North American Gundam fans, we get the short end of the stick sometimes when it comes to games about our favorite mech universe. More recently we had the mediocre Gundam Versus (2017) and New Gundam Breaker (2018) with their both infuriating and lackluster content. Gundam Versus attempted to recreate the success that Gundam Arcade titles receive in Japan, but could not replicate the fluid gameplay they’re known for. New Gundam Breaker wanted to bring the Gundam Breaker franchise to North America as a new installment, but failed miserably in the customization and content the franchise is known for. There are great Gundam games out there, but so many of them are Japanese localizations that we don’t usually see in North America. The Gundam Versus franchise has been running for over a decade at this point with great arcade popularity in Japan. It’s been about fifteen years since the last Versus localization was brought to the west, but the highly-popular Mobile Suit Gundam Extreme VS Maxiboost ON has finally arrived on our shores. With its original Japanese arcade release in 2016, Maxiboost ON has been one of the top Mobile Suit titles with its 2v2 multiplayer arena action. With this localization to PlayStation 4, we’re finally treated to a decent title that does right by fans. Mobile Suit Gundam Extreme VS Maxiboost ON suffers from major optimization issues, but the core of the title makes up for its shortcomings.

At its heart Maxiboost ON is an arena arcade fighter. Similar to previous iterations that we’ve seen (or pretty much most anime fighters that have come out recently), this arena style of fighting creates ample space for mechs to brawl. As is traditional of all fighting games, Maxiboost ON requires that players understand situational awareness in addition to their chosen fighter. Where the title deviates from traditional games in the genre is the freedom of exploration and experimentation. While normally this may be an appealing facet, this freedom ends up being a double edged sword as it actually requires a bit of time and commitment from players to fill in the gaps. The Gundam Versus series is usually notorious when it comes to requiring that players figure out mechanics, combos and strategies. Maxiboost ON is no different as you’re given basic control lists but no combo move-sets. It’s equal parts intriguing and frustrating to experiment with a mech and stumble upon a combo that you’ll end up wondering, “how did I do that?” This is where Maxiboost ON requires that players invest time to “get good.” In older Gundam Versus titles, there would even be hidden combos that the community would unearth with time. It’s difficult to say if Maxiboost ON will follow suit, but one thing is certain — this game won’t hold your hand. This does not, however, mean that the title doesn’t offer detailed tutorials for the basics. 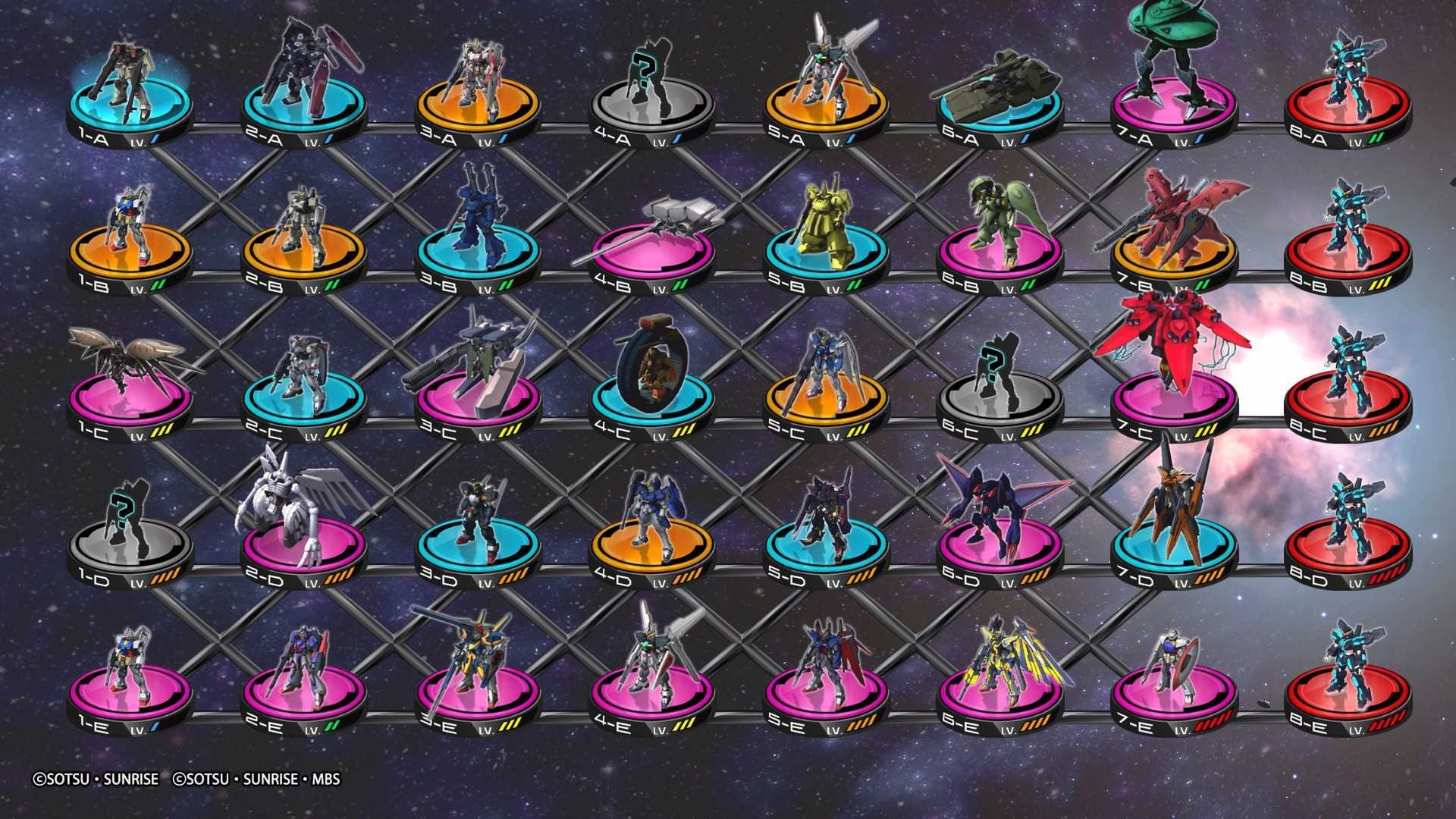 While Maxiboost ON doesn’t give players a lot of direct gameplay support, this console version of the arcade fighter does come with additional modes for players to test their mettle. The original arcade version was strictly PVP — or solo PVE against a chosen mech. This new console localization has added all-new single player, offline modes that give great practice for players not wanting to get into online battles immediately. There are a variety of CPU battle modes that allow a variety of online, offline and local play. A new “arcade mode” known as Branch Battles offers a variety of progression battles where the player can choose how they’d like to proceed through the Branch map. This could look like battling multiple enemy mobile suits or even a larger boss mech. The Branch Battles can be played alone or with a friend, making Maxiboost ON a friendly co-op title. In addition to branching battles, there are also Maxiboost Missions that serve as tutorial and challenge missions to help players get even more acquainted with the game. These tutorials were a surprising addition to the title considering its penchant for making players work to learn how to play. Tutorials don’t completely hold your hand, however, as uncovering combos for each mobile suit is up to the player. In addition to these new single-player CPU modes, the traditional online versus battles are back and optimized better than previously-seen titles. For example, Gundam Versus had horrible online capabilities that would crash and lag constantly. Maxiboost ON‘s main promise was to bring the beloved arcade fighter to a more accessible platform — meaning online play (this is what “ON” stands for in the game’s title). Whether wanting to compete in casual, unranked and ranked matches, players have a wide variety of game modes to sink their teeth into.

Where Maxiboost ON truly shines is in its faithful rendition of source material. There are over 100 mechs to battle with from across nearly every Gundam installment — including newer ones like Iron Blooded Orphans or Build Divers. What actually ends up almost bringing a tear to my eye was seeing that all mechs were part of the base game already. As in the overwhelming majority of mechs are no part of micro transactions or DLC (there are a couple that were pre-order bonuses, but can easily be purchased to complete the collection). ‘Member when games used to just have all the characters in them and you’d just play the game to unlock them? Hardcore Gamer ‘members. Maxiboost ON makes it even easier as all the mechs are already unlocked for immediate use. Do you want to play with that Red Frame Astray? Go for it. That Death Scythe is looking nice — go ahead and select it. Each mech is given a rating system based on the skill level required to pilot them which typically means that the mech may have more intricate combos to pull off or perhaps more health. While this is a good way to ease into the various mechs, it doesn’t mean the Gundams are unbalanced. Each one has its own unique traversal, combos, ranged attacks and style that are balanced in some way to keep from having an overpowered unit. It’s not so much about some mechs being “better” than others, but instead about the skill of the player. One could easily pick up a lower-rated mech and still do a great job. The original RX-78 model is a great starter Gundam with a lot of balance in range and melee. Some mechs are truly melee only (like the Barbatos) or they may be more ranged than others. Again, this doesn’t necessarily put mechs at a disadvantage and instead comes down to how the player maneuvers their mobile suit. 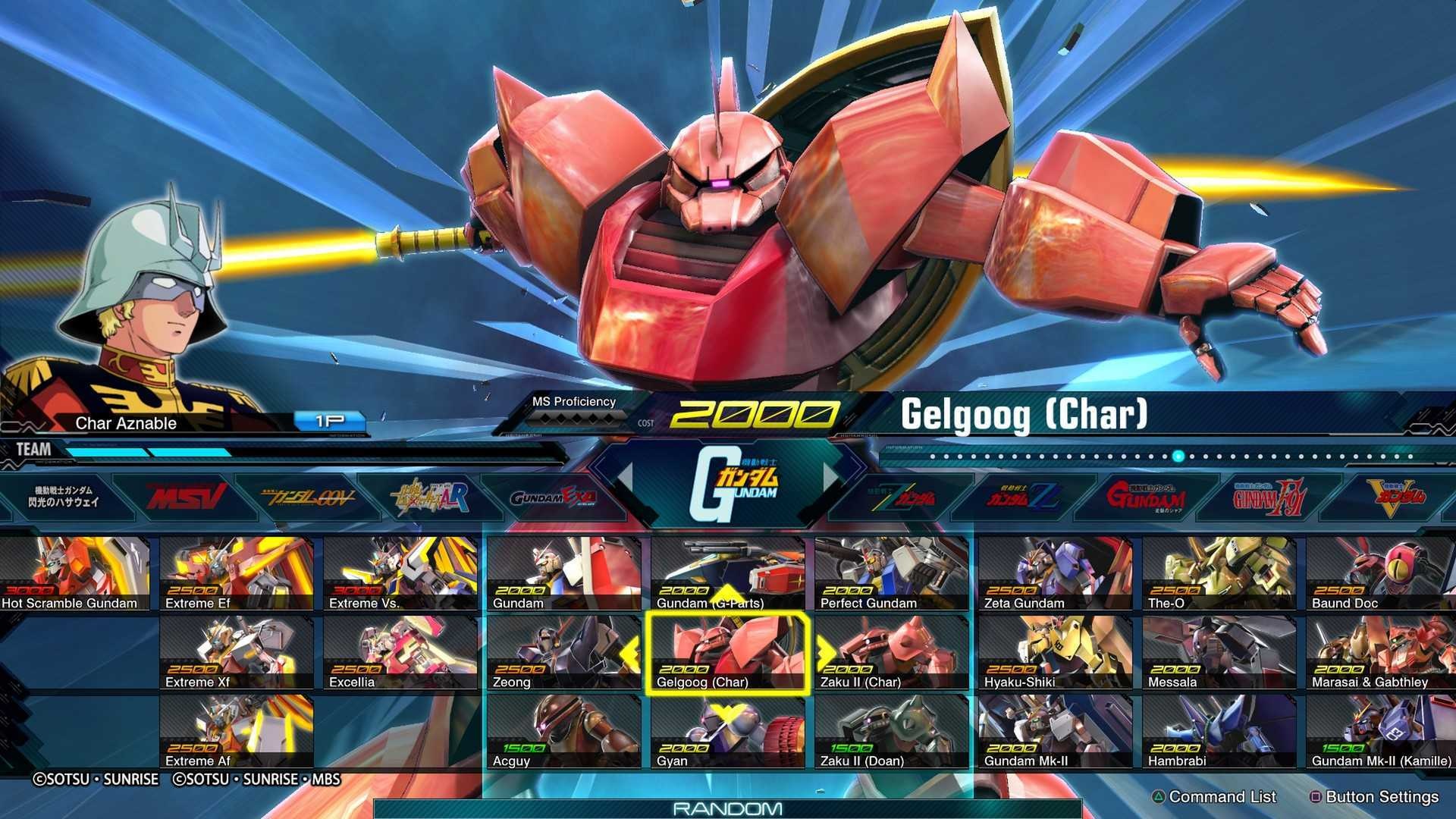 Fighting in Maxiboost ON is a bit of a mixed bag. On one hand, gameplay is frantically fun and gives the feeling of piloting your mech. On the other hand, this isn’t a deep fighting title that would rival heavy hitters out there like Mortal Kombat, Guilty Gear or Tekken to name a few. Yes, there are combos to be uncovered and each mech does a beautiful job of having its own identity and combo moves — for example, God Gundam moves and fights differently than Wing Gundam. It turns into a lot of button mashing to get to the point of understanding combat mechanics, though. This turns into a frustrating mess as a new player already attempting to learn a title with a steep curve. Once we understand the basics, it then becomes a new game of resource management as you must keep track of ranged ammo and support, as well as always maintaining a steady eye on the Boost gauge. The Boost gauge becomes a key component to the title’s combat style since it serves as a sort of “endurance” bar. Mechs have a certain amount of boost available before overheating and being unable to boost again until recharge.

The boost is everything in this game- – it is called Maxiboost for a reason, after all. Understanding the boost mechanic is the key to success. Use too much boost at an inopportune moment and you have no escape strategy. Not using boost enough means that you can’t close the gap on an enemy mech chipping at you from far away; or perhaps you miscalculated so now you don’t have enough boost to power up a heavy attack for a critical strike. If anything, the boost mechanic is way more important to understand first beyond fighting mechanics. The boost is the key to dodging, juking, canceling and various other important techniques for winning matches.

It also becomes a practice in getting acquainted with less than ideal camera angles. Maxiboost ON suffers from a classic arena fighter problem: disjointed camera angles. Because there’s never a way to truly know what’s going on around you at a 360 degree angle, arena fighters sometimes run into camera optimization issues that cause us to look off into the distance, or close up on our mech. Additionally, the title doesn’t feel very optimized for a controller either, as I noticed more fluidity with the use of a fight stick instead. These issues don’t necessarily detract from one of the better Gundam fighting games we’ve had in awhile, though. 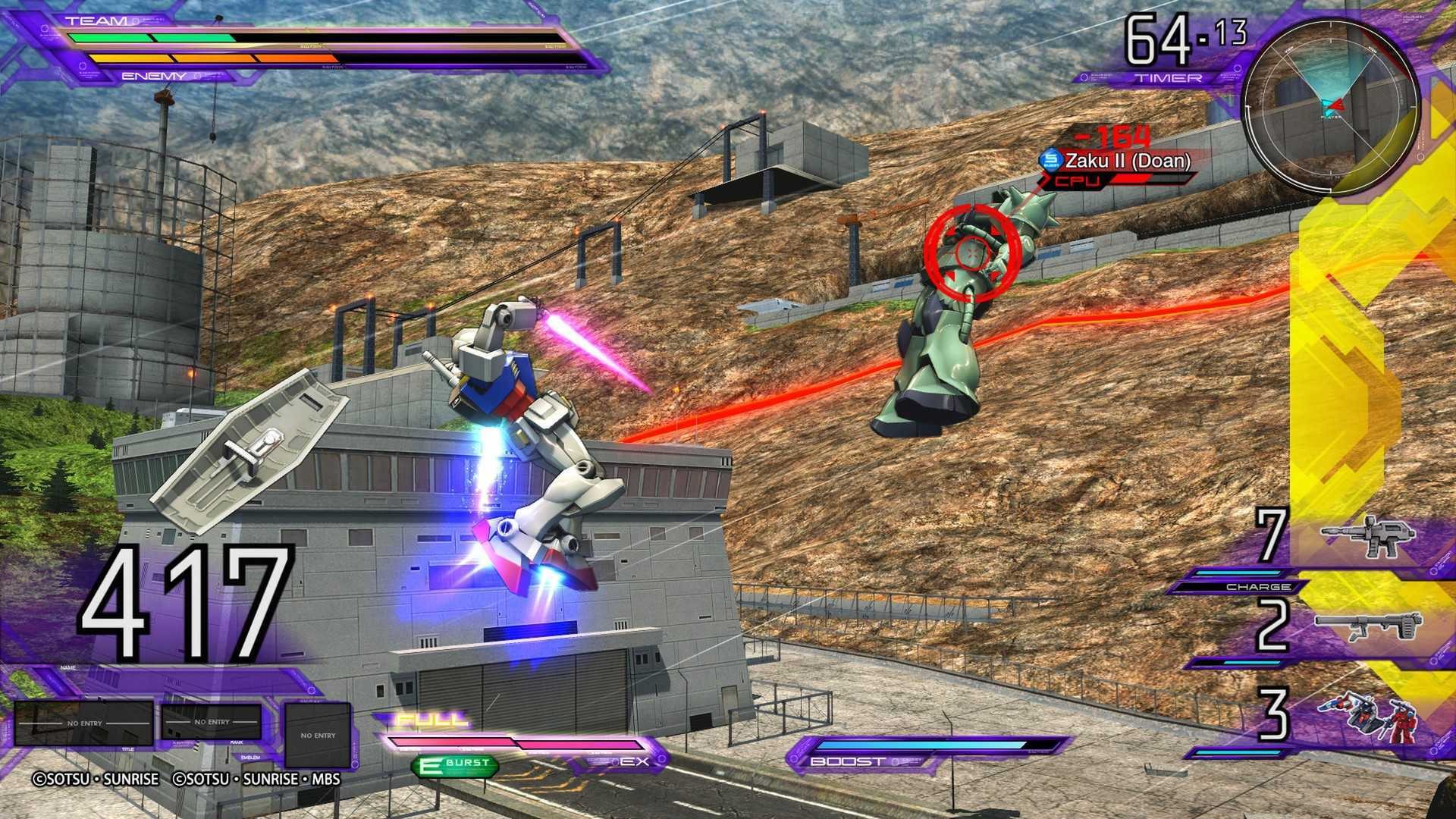 Mobile Suit Gundam Extreme VS Maxiboost ON is the fighting Gundam game we’ve wanted, but never actually got until now. This localization of a Japanese arcade favorite was made for the fans as each mech in the game is carefully detailed down to their fighting styles. The title offers a little bit of everything for all types of players as an accessible experience. Whether you’d like to play online against strangers or locally with friends, Maxiboost ON offers a great solo and multiplayer experience. Hardcore fans of the series will enjoy for what it is: a fantasy arena where they can be the pilots they’ve always wanted to be. With an overwhelmingly impressive roster of mechs to choose from, this is the pinnacle of Gundam fighting games. Hardcore fans of fighting games may not find Maxiboost ON as much of an enjoyable experience, however, as optimization bugs and its button mashing qualities are counter-intuitive to gameplay. When compared to other fighting titles, there’s a bit of sloppiness in gameplay. With that being said, however, Mobile Suit Gundam Extreme VS Maxiboost ON is a stylish arcade fighter that pays homage to one of pop culture’s greatest franchises.