There are hundreds of kinds of mice out there for all different types of consumers. Ambidextrous for left-handed users, ergonomic for the best feel possible, trackballs for a different kind of navigation, and of course the various gaming mice that allow for better performance/ultra-response times in first-person shooters, and even MMOs. MMO mice are becoming more niche as there are fewer AAA releases, but their fanbases are still thriving, not to mention the uses of such a device go well beyond what you might expect. Having a multitude of keys at your thumb tip gives players a ridiculous amount of control, far more than anyone knew they wanted. No longer do you have to strain your hand as you reach across the keyboard to hit an oddly-placed command. With games such as Phantasy Star Online 2 and Final Fantasy XIV taking over the headlines, there’s no better time to invest in an MMO mouse and Corsair’s offering is one that will leave you entirely satisfied.

Obviously the biggest strength the Scimitar Elite has is the twelve side buttons that you’re able to bind various commands and macros to (along with the five on top). Being that MMO and MOBA games have an incredible number of actions, especially the former, assigning them to your mouse will give you a significant advantage. Having so much hand real estate on only two buttons while the other does all the work never seemed like the most ideal way to play these overly complicated games, so distributing this to the mouse works magic. Half the buttons are textured caps, allowing you to determine the correct key when you’re scrolling your thumb across them, but they’re all tightly packed together without any other discerning feature. You’ll have to practice and rely on muscle memory more than anything, as while I found myself constantly pressing the wrong button early on, it’s a gradual process of identifying them properly. Even after a few weeks with it, I’m far from perfect with it. Regardless, the twelve keys on the side feel good and are the big selling point for a good reason. 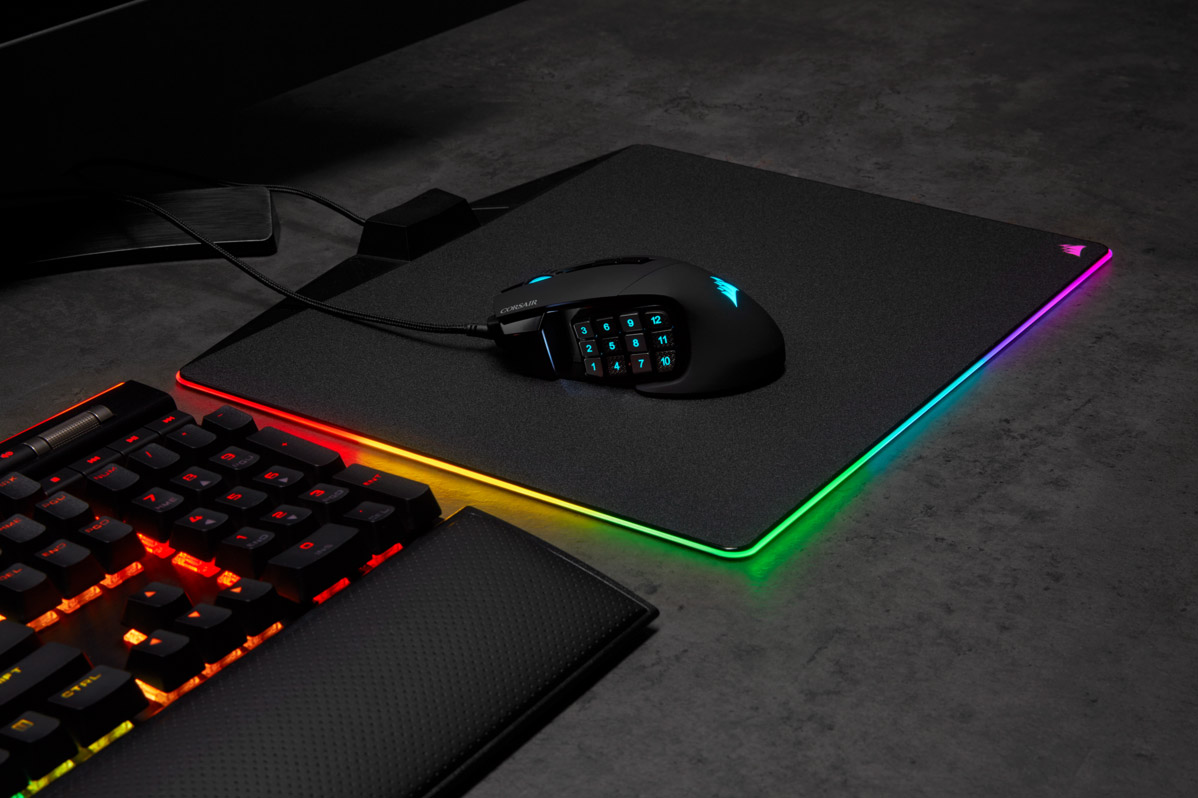 It’s not just MMO and MOBA games that can take advantage of this, as we tried this on various titles such as third-person shooters, stealth titles and first-person shooters and they work wonderfully. You’re able to rotate between various profiles on the fly (which has onboard memory), which helps immensely when swapping between the different games. In addition, this is good for productivity in various programs such as Photoshop and Premiere. If you thought having six macro keys on the side of a keyboard was groundbreaking, try twelve readily along your thumb.

The Scimitar Elite also sports up to 18,000 DPI in its optical sensor, which allows for an incredible amount of sensitivity. This is fully customized through the iCUE program — which we will touch upon in a little bit — and you’re able to rotate between five different DPI settings on the fly. Another feature iCUE has is the ability to instantly calibrate the device to your surface. With a simple, quick click of the button, and moving the device around for a few seconds, the Elite will become acclimated to your desk or hopefully your mousepad. In addition to this, the Elite also sports an ultra-responsive 1000Hz / 1ms polling rate, giving competitive gamers and even great edge. The Scimitar Elite certainly is the entire package when it comes to features. 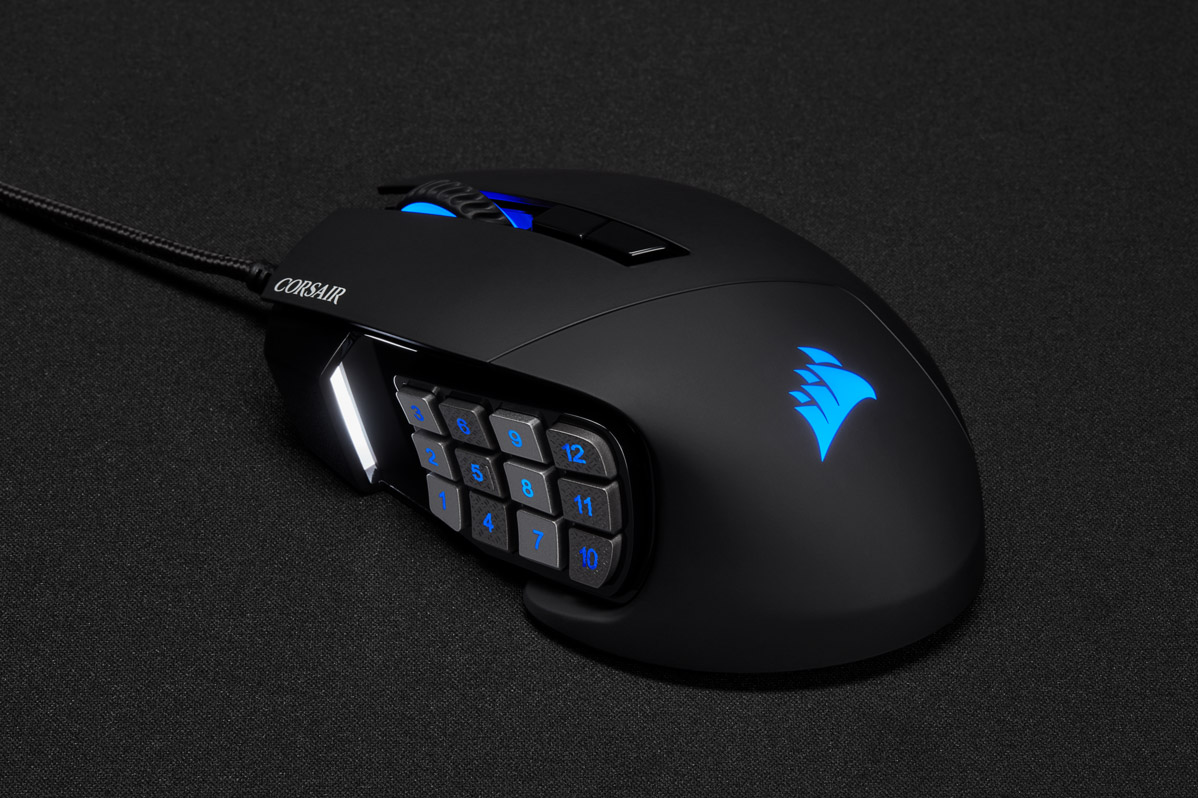 Obviously, even with all these features, a mouse has to be comfortable to use in order for it to excel, and fortunately the Scimitar Elite falls into this category. Despite looking a bit bulky, its design is surprisingly comfortable for both standard and claw grip users. The core design of it feels pleasing and your thumb is positioned over the macros where you’re able to hit them without any problem. Users will need to adjust to having a little more of a ridged touch on your thumb at all times, but otherwise it feels nice, especially for someone who fidgets. You’re also able to move the slider forward or back on the mouse with a rather adorable included hex key, ensuring that depending on your hand size, you won’t have much problem where the keys are located. The Elite does feel weighty, coming in at 122g, so be prepared for more resistance, but otherwise it’s not bad. It also has a lightly-braided cable for more durability which I much prefer over the heavily-braided cables you see from time to time. In the end, the Scimitar Elite feels perfect in my hand.

The Scimitar Elite uses Corsair’s iCUE technology for fully-customizable RGB lighting and effects. The lighting effects from the Scimitar are pleasing to the eyes; it’s not overly flashy, with the logo, scroll wheel, dpi indicator and each of the numbers on the key slider lighting up. It’s highly customizable, so you’re able to specifically select each of the four RGB areas and modify their colors through the seventeen different animation types. So if you want the key slider to pulse while the scroll wheel spiral rainbow, you can do just that and even sync with your other Corsair devices. I did run into a little trouble in the program itself assigning different animation types, though, as doing so would add the effect to the keyboard as well. Overall though, I’m pleasantly surprised by the results; having used the Corsair K95 Platinum, it had a lot of issues where the lighting effects would, and still does, freeze. The Scimitar Elite does not have such an issue, although it does have its own problem. Unfortunately, I do consistently run into one issue that could arguably be worse. In the few weeks I had to test this, at least four times did I need to repair iCUE to ensure that the slider keys would actually work. 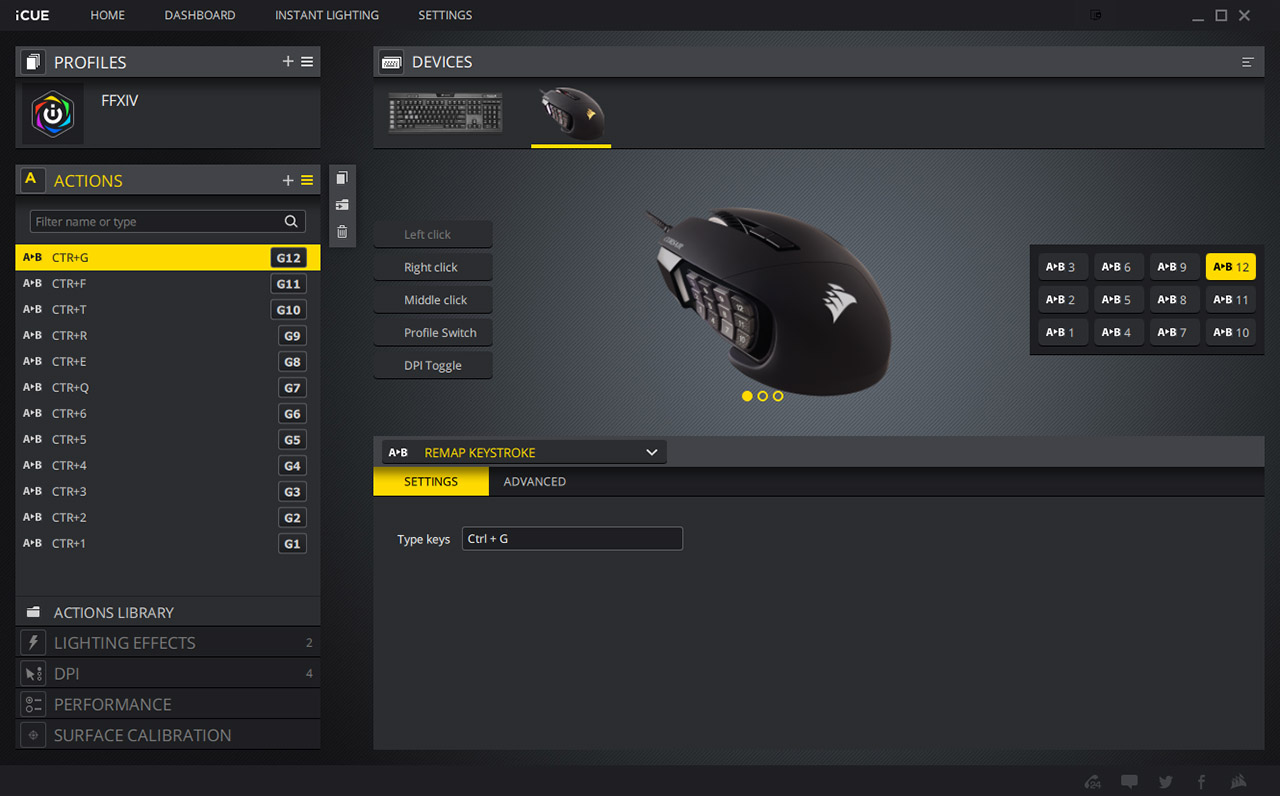 The Corsair Scimitar RGB Elite Gaming Mouse is a device for a select audience that has a much broader appeal. It’s a must for MMO and MOBA games such as Final Fantasy XIV and DOTA2, but will aid you in other genres with its easily customizable and swappable setup. I could not go back to a regular gaming mouse as the extra functionality goes a long way for not only in games but in productivity. It still has some challenges to overcome, such the keys sometimes not working, requiring users to repair iCue, and the keycaps are only lightly textured, taking a little while to get used to and relying on muscle memory more than anything. Regardless, with RGB lighting, upwards of 18,000 DPI, 17 customizable buttons and an overly-satisfying feel in your hands, the Elite lives up to its name. The Corsair Scimitar Elite is by far the best MMO mouse I’ve ever used, and considering the price point, it’s a steal for what it has to offer.