I was overjoyed to jump in to Horizon Zero Dawn for PC. Sony’s arrival on PC has been long awaited and they couldn’t have brought a better game with them (maybe with the exception of Bloodborne) to highlight what they have to offer. Unfortunately, since downloading it last week, I haven’t actually played it much. Why you might ask? Well because it’s a mess. I don’t think I’ve played a PC port this broken in a long time. This is a game that highlighted the PlayStation 4’s power three years ago and showcased the Pro’s HDR & 4K Checkboarding technology. Even to this day, it’s one of the most beautiful worlds to explore and an absolute joy to play. Unfortunately, prior to release, the PC port has brought nothing but frustration to the point of it threatening the health my own PC.

We’ll give Sony the benefit of the doubt as they have stated earlier this week that they plan on releasing a Day 1 patch that hopes to address many of the issues – something that benefits a digital-only release such as this. But this is to serve as a cautionary warning not to blindly spend your hard earned cash yet, at least until these problems are confirmed fixed.

Let’s start off with the good: there are a fair amount of graphical options to choose from. It’s not going to blow your socks away, but there’s still a surprising number given its origin on the PlayStation 4. We’re talking textures, model quality, anisotropic filtering, shadows, reflections, clouds, anti-aliasing, motion blur and ambient occlusion. It also features Ultra-Wide support, which is a much needed addition to any game, HDR support, adaptive performance FPS, three extra field of view adjustments and an unlocked framerate for those with powerful computers. The keyboard and mouse controls have also been well implemented, most of which are what you’ve come to expect with a third-person action title. Using a mouse to aim Aloy’s bow has never felt so precise. If you don’t like how they’re laid out, though, you’re even able to fully remap if you see fit. 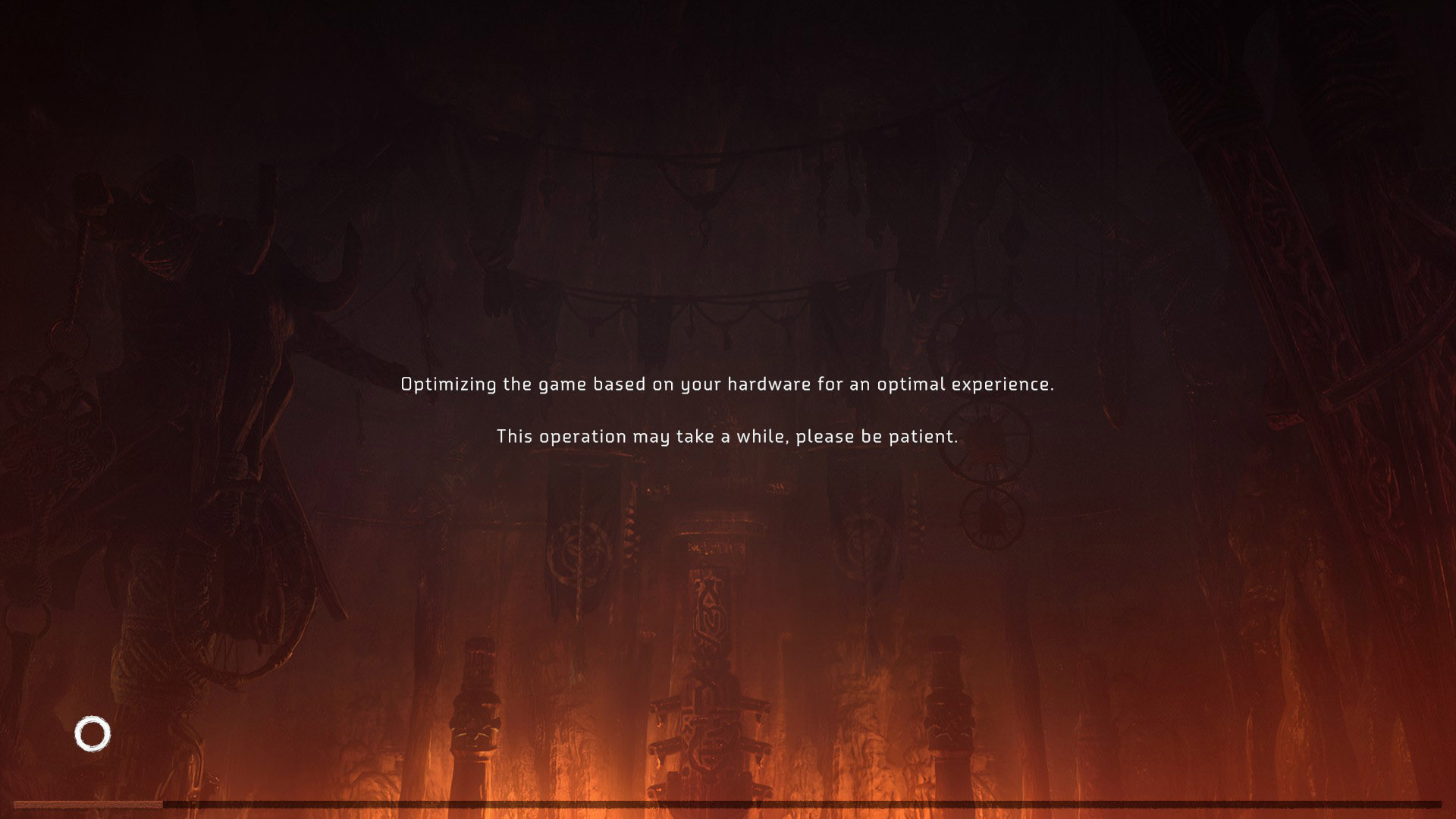 Now onto the bad: I’ve had nothing short of an aggravating time trying to play Horizon Zero Dawn on PC. I should state, my PC is not state of the art; it’s getting a little old with a GTX 1060 being the GPU and an Intel i5-6600k being the CPU. Even so, it’s more than capable to run the game based on the recommended specs.

The first forty-five minutes was watching an “optimizing” screen, which I had to repeat when I updated my drivers. Then the first two hours was marred with five separate game crashes, a multitude of freezes that lasted more than five seconds at a time and a couple of full on crashes of my computer. On top of this, the game does not seem to be well optimized, as the frame rate fluctuates wildly (as low as the single digits) during conversations or out in the open world, generally for no discernible reason. More times than not it will be at the beginning of a cutscene or transitioning between the camera shots. The crashes were the hardest element to swallow, though. Crashing the game is one thing, and losing progress is never good, but it literally crashed my PC so much that it basically forced me to repair my C drive, something I don’t think I’ve had to ever experience from a PC game before. 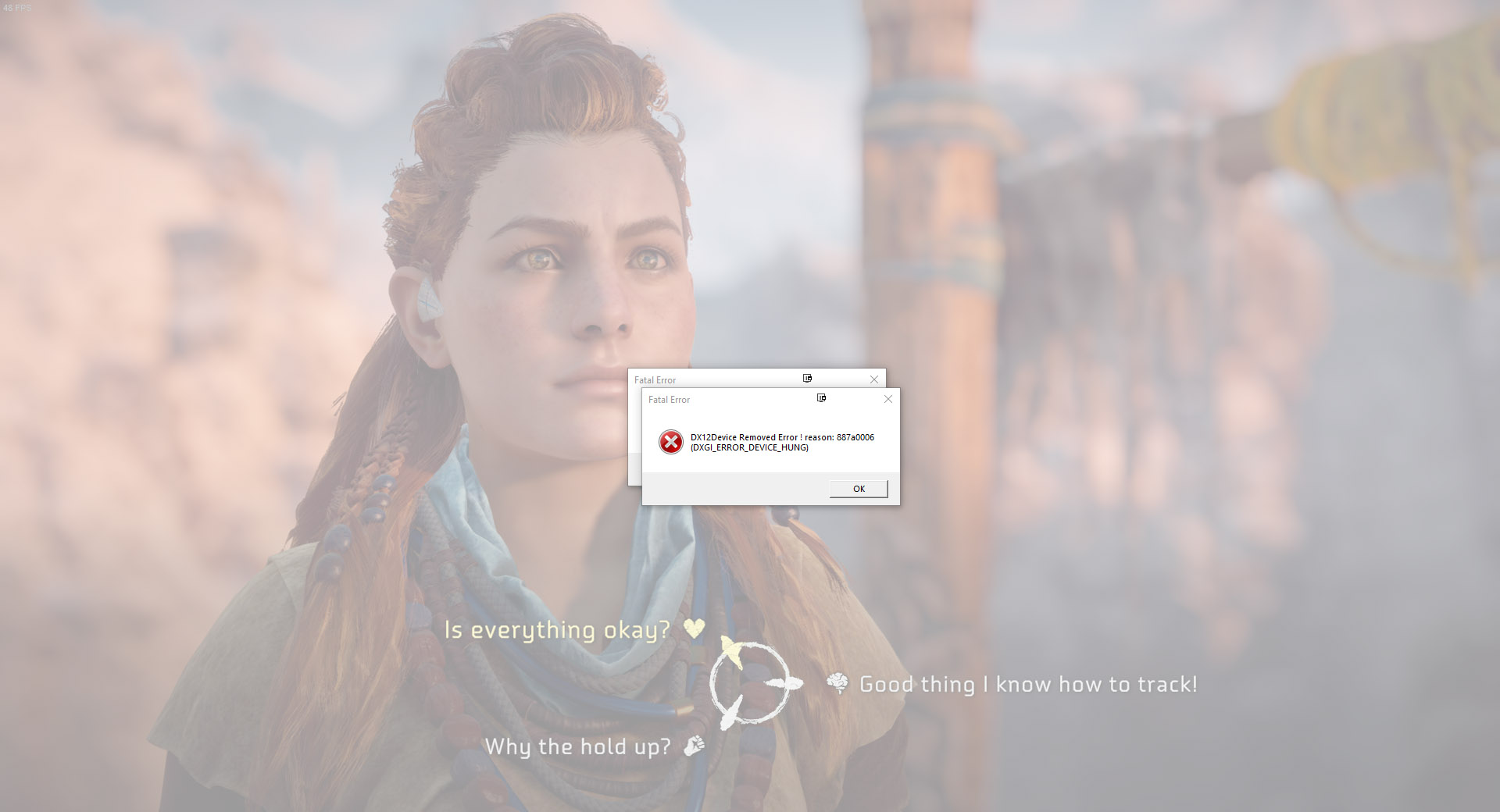 At first, I thought it might be the drivers as I hadn’t updated them in a couple of months, but that was not the case, and as stated, I had to go through the 45-minute optimizing section a second time. Then I thought it might be because it was running on an NVMe drive. Moving it to an SSD unfortunately did not help. Finally, I redownloaded the entire game to ensure something didn’t get corrupted when it installed, but alas, once more these issues persisted.

Suffice to say, my time with Horizon Zero Dawn for PC was not a good one, but fortunately it’s far from finished. We thought about holding off the extra couple of days to test out the Day 1 patch, and while we will be and updating this article, we wanted to jot down our struggle thus far in case we continue to run into these issues. If everything is fixed by launch, none of this will actually matter and you’ll get to experience one of the best games of 2017 with all the bells and whistles you expect from a PC release. But at the current moment that’s not our experience.