Marvel’s Avengers still awaits its big moment. After a lackluster reveal at E3 2019, Crystal Dynamics has worked double-time to get the game ready. This included a rework of the character’s designs, better clarification of what players can expect from the title and the more recent War Table reveals. The best thing Crystal Dynamics can do is get the game into player’s hands, however, which they will thanks to the upcoming beta. We got a chance to hop in and check out the beta early to see how Marvel’s Avengers is shaping up a month out from release.

In terms of sheet content, the Marvel’s Avengers beta comes packed with lots to do, giving players a taste of the vast array of content coming at launch. It features four Hero Missions, 4 War Zones and 5 Drop Zones. Hero Missions specifically drive the campaign forward and usually assign players, specific heroes, to play. They also, at least for two missions in the beta, feature boss battles with classic Marvel villains. War Zones are lengthier missions that can last 10 minutes to 2 hours and can be played co-op or solo with AI companions. Finally, Drop Zones are bite-sized missions with a single objective. 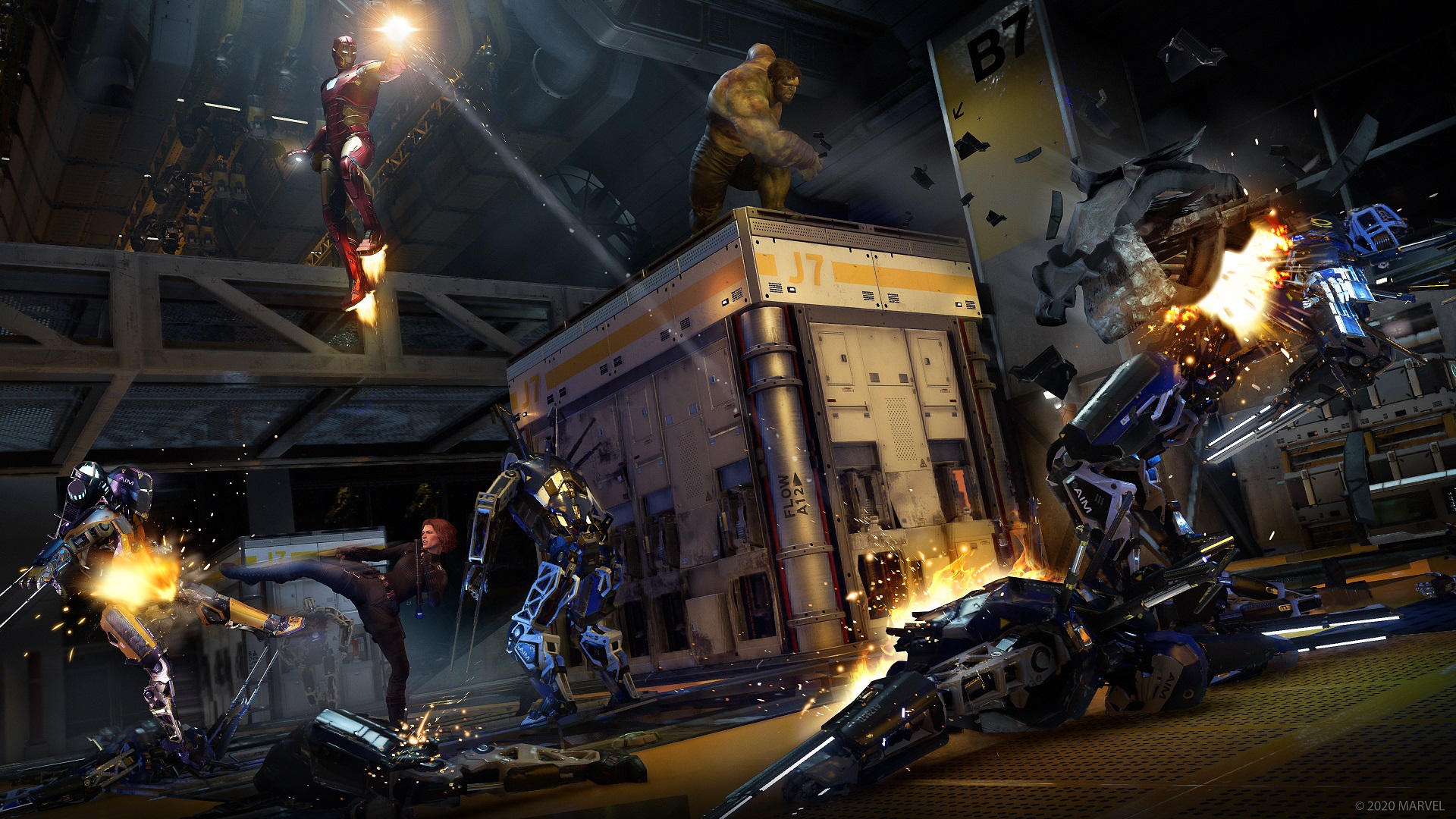 The campaign missions provide a small slice of what to expect from the story. ‘The Light that Failed’ is the full opening mission players will recognize from the 2019 reveal. It provides a quick sampling of the five main Avengers. ‘To Find Olympia’ takes players deep into the Pacific Northwest’s forests in search of Jarvis with Hulk and Ms. Marvel (Kamala Kahn) as playable characters. ‘Missing Links’ focuses on the Russian tundra as Hulk and Ms. Marvel scout out an old SHIELD base. Finally, ‘Help Dr. Banner’ is a fully co-op Hero Mission centered around one of Banner’s personal struggles.

The story missions are generally well-paced and the game appears to be hinting at intriguing mysteries. It’s also nice to get specific missions designed around each hero that dives more into their background and personal wants and needs. It would have been nice to get some more character variety, though. With six playable characters at launch, the fact that the selected campaign missions mostly restrict players to just Hulk and Ms. Marvel is disappointing. Thankfully, two other characters become playable after completing ‘Missing Links,’ though they don’t unlock any additional story missions. 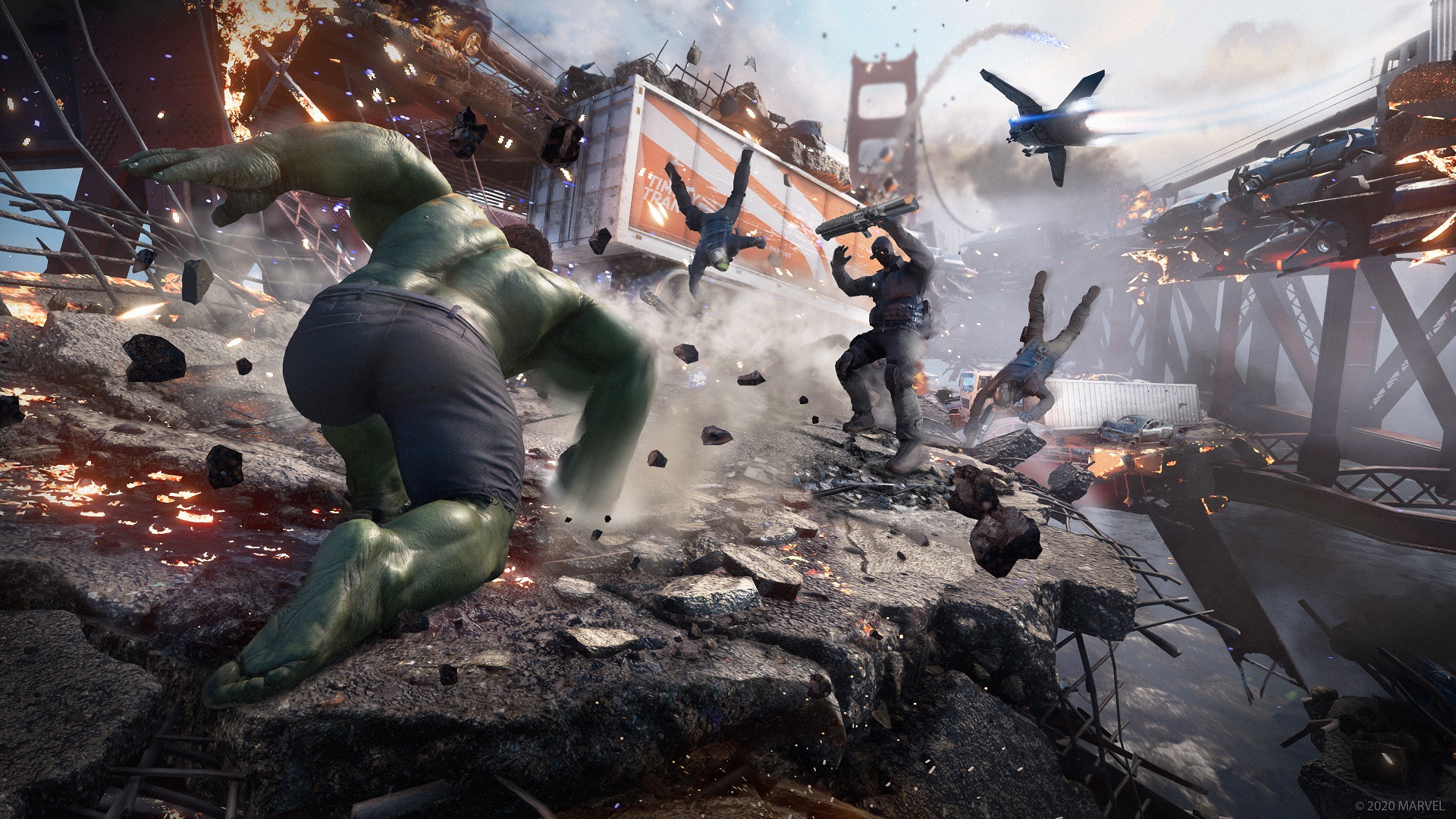 Of the six characters available at launch, only Thor and Captain America are unplayable in the beta (outside the tutorial mission). Hulk and Ms. Marvel are available from the get-go with Iron Man and Black Widow unlocking later. In terms of gameplay, all characters share a core base of moves. Each has light attacks, heavy attacks, a dodge and a ranged attack. What makes them unique are their specific character abilities and Ultimate attacks. For example, Iron Man can fly, hover and counter-attack. Hulk’s Rage allows him to absorb attacks without taking damage. Ms. Marvel’s stretchiness gives her wider range. Finally, Black Widow has a wide array of gadgets at her disposal. To try out each character, players can take each of the four heroes for a test run in the HARM Room (Holographic Augmented Reality Machine).

Marvel’s Avengers gameplay mechanics work, but what might turn off some players is the ‘Destiny-route’ the game is taking. Much like Destiny, Marvel’s Avengers’ ultimate goal is to acquire better and better loot to increase your character’s power levels and access higher-level missions. The higher an enemy’s power level, the more attack-sponge he is. While higher-level gear frequently dropped during our time with the beta, there’s no guarantee the drop rate will stay the same in the full game. There’s also a subtle disconnect due to some of the character’s in-universe power. While it makes sense for characters like Captain America or Black Widow to need multiple hits to fully layout an enemy, it shouldn’t for a character like Hulk. It’s odd seeing the Hulk wail on normal human opponents multiple times just because his ‘power level’ is lower than theirs. Hopefully, the full game features enough drops to stave off this disconnect. 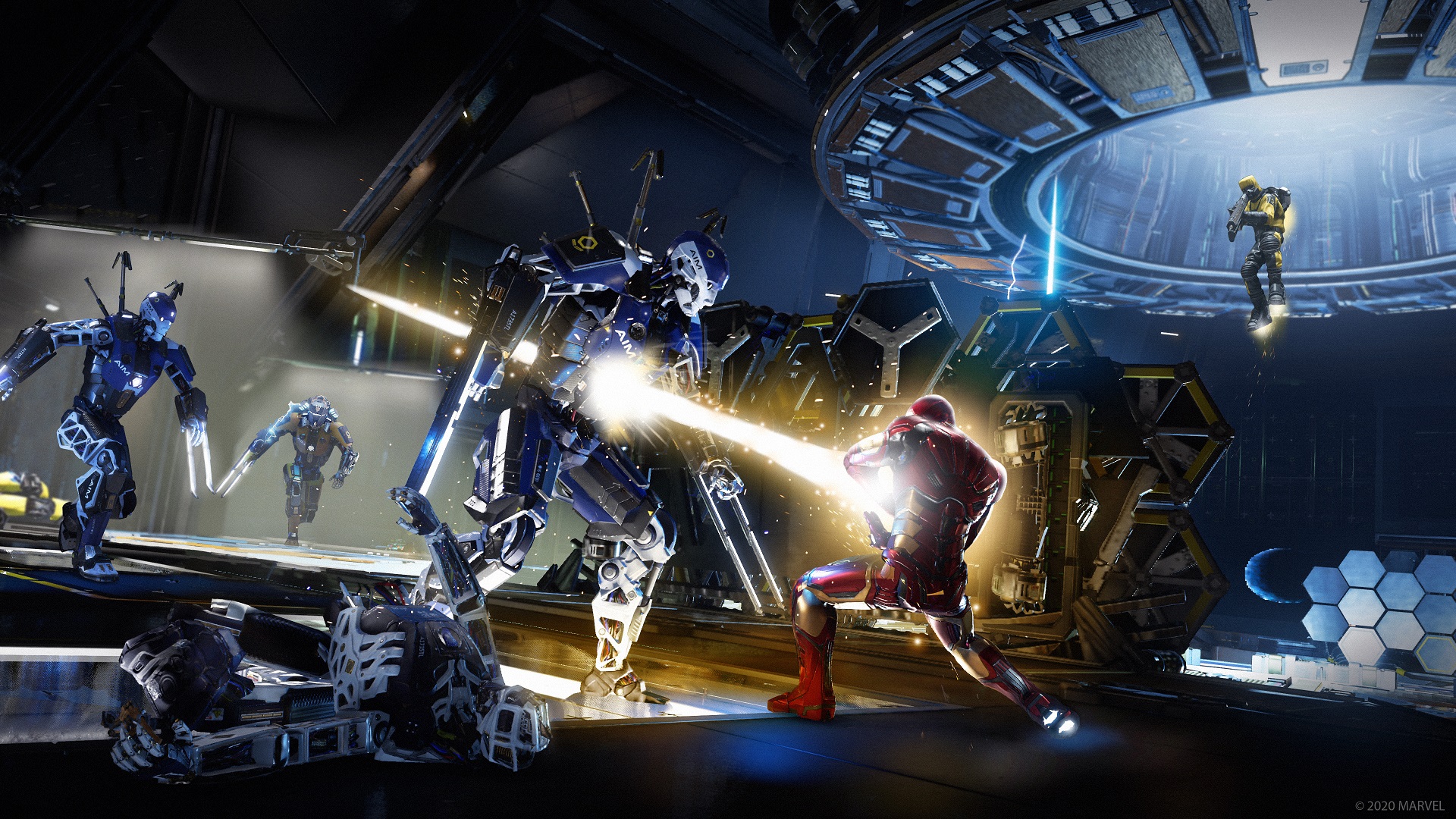 All of Marvel’s Avengers key points (the characters, gameplay and loot) come together in the fully co-op activities, Drop Zones and War Zones. Playable with up to four players, you can also opt to go solo with AI companions. Of the two, Drop Zones are by far the worst activity in the beta. Consisting of a single objective taking place in repetitive environments, Drop Zones only last a few minutes. Considering how long the load times can be and how few rewards drop, they’re rarely ever worth it.

War Zones, on the other hand, are well worth it. Akin to Strikes in Destiny, War Zones drop players into cities and dense forests and task them with progressing through hordes of enemies, puzzles and other activities in pursuit of one primary objective. These are far more enthralling than Drop Zones and drop awesome loot. In terms of length, players can expect to spend ten minutes to up to two hours working through a War Zone.

As a beta, Marvel’s Avengers is still in a state of development with Crystal Dynamics working behind-the-scenes on fixes. Our time with the beta was relatively smooth, but there were issues. The game crashed twice, there were funny glitches with enemy bodies and some not so funny ones that got the characters stuck in geometry. Then there’s the frame rate, which frequently buckled when numerous enemies and effects were going off at the same time. Also, we weren’t truly able to test the servers due to the small number of people playing at the time. The real test comes over the next few weekends as more and more people get access. 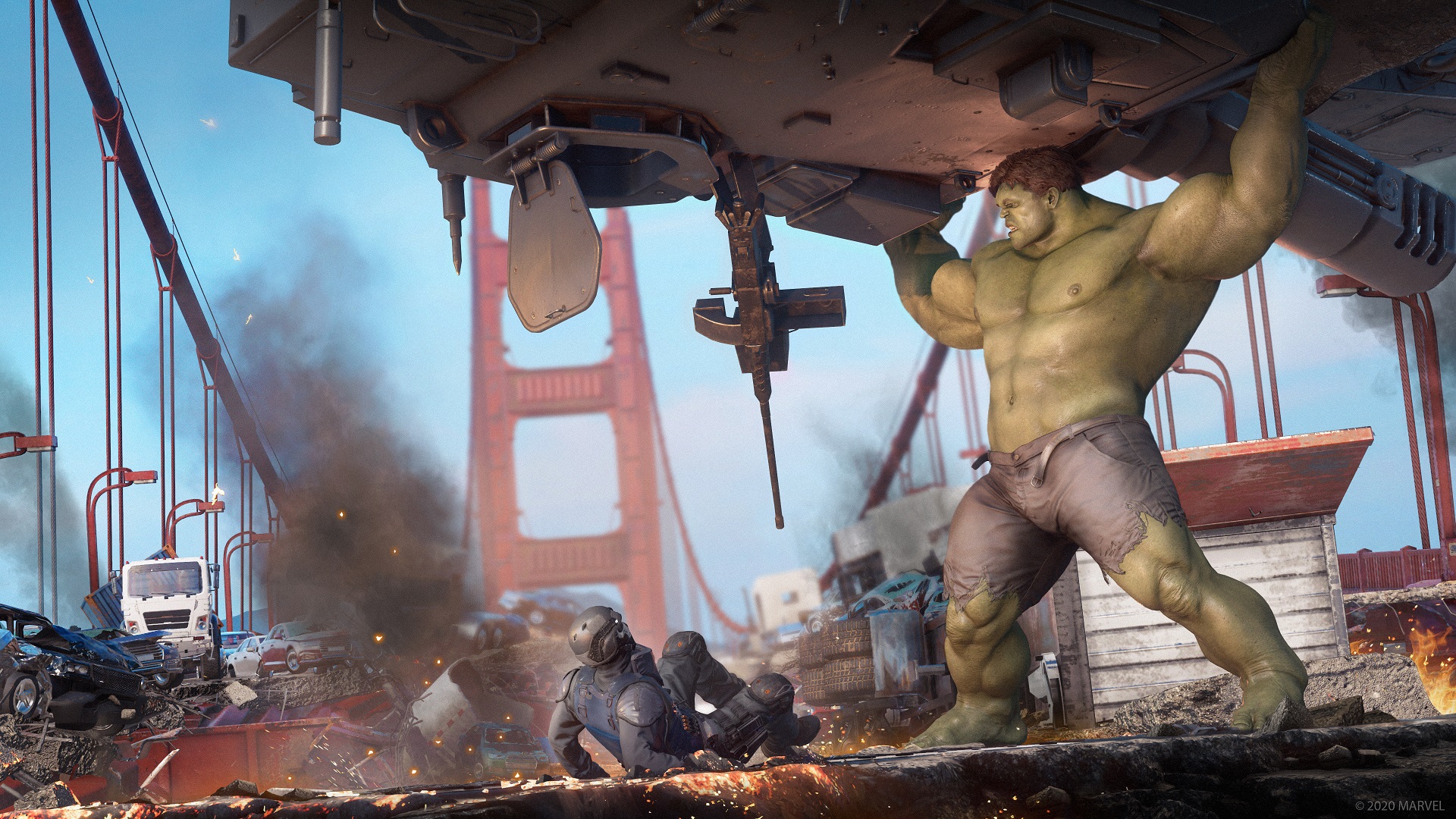 Heading into launch, Crystal Dynamics needed to give players something that would fully explain what Marvel’s Avengers is and the beta successfully delivers on that promise. The wide array of content, available playable characters, available gameplay mechanics and loot-based progression system provides the most precise picture of what Marvel’s Avengers strives to be. The beta is a fun slice that, hopefully, leads to an equally fun fully-fledged game. While the loot-based ‘power level’ system seems odd for characters capable of defeating enemies so much more powerful than human grunts, the gameplay and current loot drop rate help mitigate the issue, at least in the beta. Luckily, we won’t have to wait much longer to experience the full game.