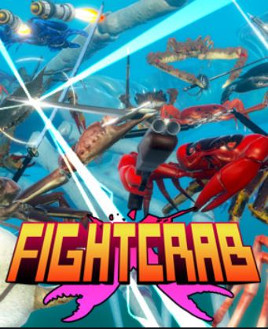 As one would surmise from the name, this is a game about crabs fighting. The tutorial even states so eloquently “you are a crab” in case there is any confusion about this. But these aren’t just regular ornery crustaceans duking it out with their pincers. These are the Spartan warriors of crabs and go into battle with weapons. These crabs bring it with swords, chairs, revolvers and even jousting equipment. The premise of the game seems like one of those ideas that comes to mind late at night and possibly under some psychoactive chemical influence but somehow became a real game.

Controlling one’s crab is actually done with a rather unique control scheme. The left and right analog sticks independently control the position of the crab’s pincers. The shoulder buttons “pinch,” the trigger buttons throw claw punches and the D-pad has the crab scurrying about in whatever direction. The fights are similar in nature to Smash Bros. where each hit increases the damage percentage, making it easier to know the opponent crab on its back. Once the crab is knocked on its back for three seconds the match is over. Fight Crab has a solo campaign mode along with online and offline multiplayer. 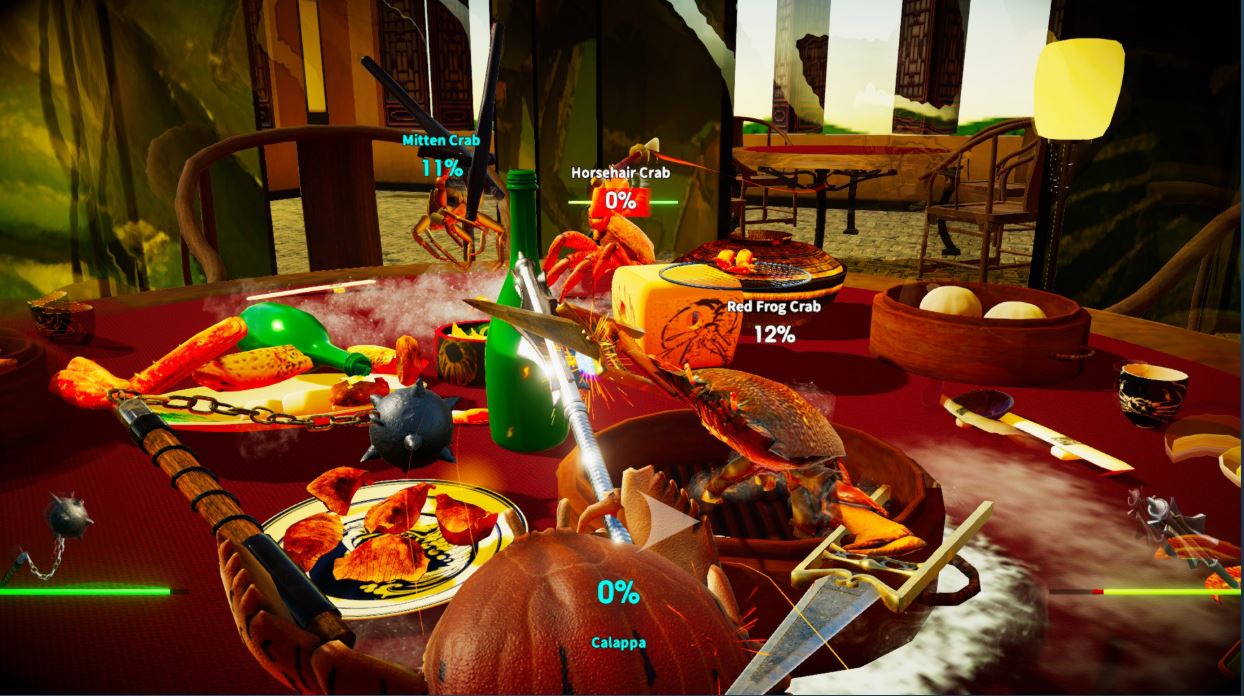 The controls sound weird to describe but they actually make sense once the player is acclimated to them. They would have benefited from some refinement but thankfully the enemy AI is about as cunning as real crabs, so even if the control response can best be described as feeling drunk, it’s not too difficult to slog your way through the fight and knock that delicious-looking enemy crab on its back. The unique control scheme was easy to grasp on principle but during the review I don’t feel like I ever mastered the nuance and finer points of the crab battles, as most victories came at the end of flailing the analog sticks and button mashing. My opponents seemed equally confused and clueless about fighting gracefully but what can you really expect from crabs.

Fight Crab is a ridiculous premise for a game and that is where its charm comes from. It’s a game that caught our attention at Hardcore Gamer because of the sheer absurdity of it but did end up being entertaining. There’s a campaign mode where the player takes their crab across the world, ending up in more and more ridiculous scenarios. Having crabs fight in cities with Godzilla-esque proportions added to the surrealism as the environments gave the crabs a sense of having an inconsistent size. 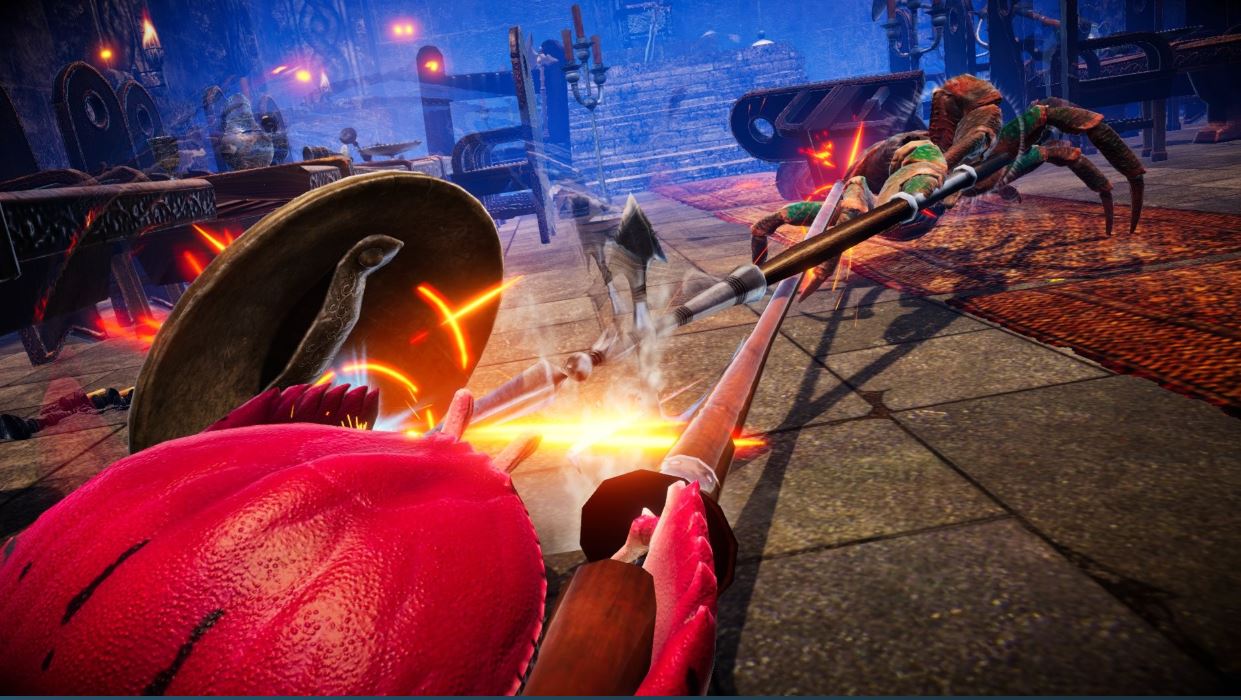 Fight Crab is one of those games that’s difficult to take seriously just based on its premise and even harder with its execution. It’s a game where its unique control scheme offers a 3D fighting that’s moderately enjoyable but going all out with making it as ridiculous as possible only enhances the experience. Some things could have been improved on, like having a clearer explanation on how to properly level up your crab in campaign mode and the permanence factor of weapons purchased in the shop, but at the end of the day Fight Crab should be treated as what it is. It’s not what anyone should hold to AAA expectations but is an amusing and absurd title about fighting crabs, ridiculous for the sake of being ridiculous.

The graphics of Fight Crab is one of the things that’s a high point. They aren’t going to push a top of the line graphics card to the breaking point but having realistic-looking crabs in such cartoonish situations only makes the experience more entertaining. The anime-inspired tune that plays at the beginning of the game is surprising good, and pumps up your pincers and gets you ready to go fight some crabs. 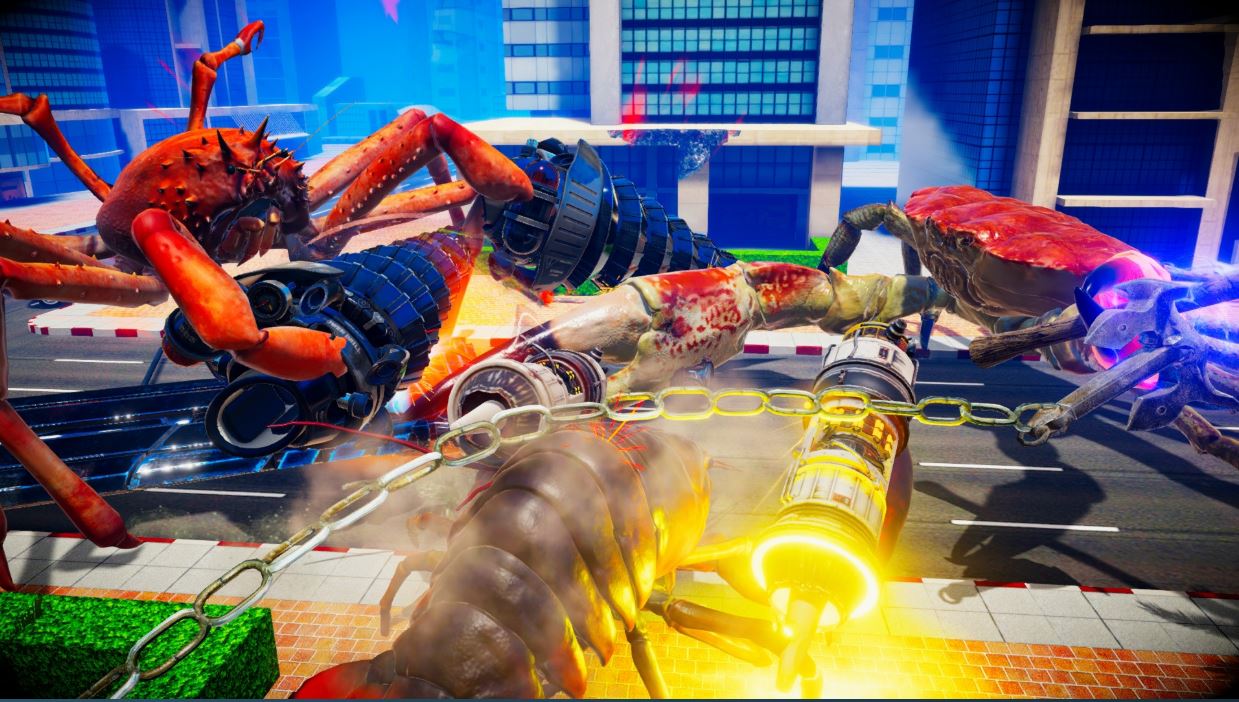 Fight Crab is one of the more ridiculous games of 2020. The level of ridiculousness works to its advantage, as the game mechanics themselves are rather mediocre the absurdity makes it interesting. It’s not the deepest fighting experience by far, as the gameplay didn’t hold my interest so much as wanting to see what the next bizarre arena would look like. A game this ridiculous is best enjoyed with the company of friends to revel in the absurdity or may even be one of those rare games that might be more entertaining to watch a streamer play it. Fight Crab is a novelty title, and while it’s an amusing one, the gameplay doesn’t do much to prolong the enjoyment after the novelty wears off, but prior to that the game does provide many authentic chuckles.