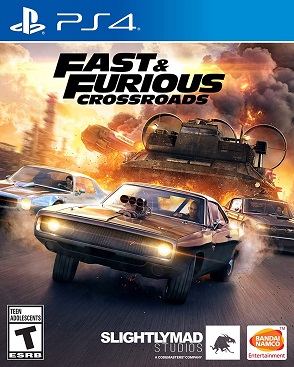 Licensed movie games have a long history of thriving in mediocrity, loosely capturing the more engrossing worlds and stories shown off on the big screen and attempting to translate that into interactive experiences that, with a few exceptions, rarely go above and beyond what is expected of them. Even the highest-grossing films that garner numerous sequels can still struggle to find success as video games after multiple attempts, with the street racing/over-the-top action movie series Fast & Furious being one of the more relevant examples. In addition to a dedicated expansion for Forza Horizon 2 and several mobile titles, the Fast & Furious franchise has had nearly two decades to try to replicate the high speed vehicular action into a standalone game with little to show for it, with 2006’s The Fast and the Furious and 2013’s Fast & Furious: Showdown both receiving middling to negative reception from fans and critics alike. The latest endeavor comes from the team at Slightly Mad Studios, whose previous works includes Need for Speed: Shift and the Project Cars trilogy, which puts a larger emphasis on the heists of the recent movies and includes several key actors reprising their roles in the campaign. Outside of a few enjoyable set-piece missions, Fast & Furious Crossroads‘ generic story, abysmal driving mechanics, overly-chaotic multiplayer modes and dull presentation do little to stir any excitement in all but the most dedicated of fans of the movies.

Fast & Furious Crossroads‘ campaign takes place shortly after the events of the most recent film, The Fate of the Furious, and primarily follows new characters Vienna and Cam, two former street racers from Miami who have moved to Barcelona to escape their troubled past. After their local friend Sebastian runs into trouble with the Tadakhul, a Moroccan mob with troubling ambitions, Vienna and Cam are dragged into the world of international espionage by Letty and Dom (voiced by Vin Diesel and Michelle Rodriguez, respectively) and are forced to re-embrace their abilities behind the wheel in order to stop a global threat. The star-studded cast, which also features Tyrese Gibson and Peter Stormare, goes a long way towards helping the plot feel connected to the rest of the films, alongside more subtle references that long-time fans will appreciate. Unfortunately, the bland and quip-filled writing does little to help us relate to any of the newly-introduced characters, or more importantly, capture any of the heart and humor that lies at the core of the films, particularly since there’s rarely a moment of silence between the constant attempts at jokes that infrequently manage to land. This generic sentiment is only worsened by a few clear cuts in the plot of the story, with several jumps to locations and key events that feel sudden and unnecessary, especially when considering the campaign’s total runtime of under five hours.

At the core of any good racing game is solid driving mechanics, but despite the previous experience of the well-received racers that Slightly Mad Studios had worked on previously, Fast & Furious Crossroads struggles to accomplish even the basics of driving. Nearly all vehicles, from sports cars to delivery vans, handle basically the same outside of their maximum top speeds, and are extremely sensitive while turning, drifting wildly around corners regardless of the surface you are driving on. On top of this, vehicles will barely react to any sort of collisions, with minimal damage indicators even when players are close to death, which happens infrequently thanks to the generous health bar. It’s also largely unclear which environmental objects are or are not destructible, leading to frustrating instances of instantly halting all progress after driving at top speeds. While it was possible to gradually adjust to these shortcomings over time, this fumbling of a key fundamental makes the core gameplay feel more like a chore and less like a summer blockbuster.

Much like the recent films, the story missions take place across a variety of international locations, including Barcelona, Morocco and New Orleans, but their appeals are vastly restricted by their lackluster representations, with sidewalks devoid of citizens and a near absence of landmarks that make these locations feel unique. But whether in (supposedly) bustling cities or deserts or large stretches of warehouses, the linearity of the large majority of missions is abundantly clear, with giant yellow waypoints and countless invisible walls shepherding the player towards the next objective with little room for exploration. In addition to a few tailing missions and street races, far too many of the levels simply feel like filler with arbitrary time limits and minor modifiers to separate them, as players travel to one objective marker, after which the level simply ends or the player is forced to wait for story justification to drive to the next objective marker. The brief runtimes of many of these sequences with no additional incentives for better performances leads to a large portion of the campaign feeling forgettable, with the exception of several heist-adjacent sequences that represent the highlights of the game.

The rare bits of joy that emerge during the campaign occur during a few levels that put a nice variety of vehicles and abilities at the player’s disposal, typically while driving alongside or behind a larger vehicle. While every vehicle does have the option to boost with turbo or sideswipe antagonistic cars, select characters will also provide access to unique abilities, including a harpoon to pull parts off of larger vehicles, hacks to power off other cars, or rockets and tire spikes to deal out additional damage. These gadgets, while simple to pull off, feel largely satisfying to perform against both smaller vehicles or during boss fights where you seamlessly swap between multiple characters to take advantage of their different specialties. Without specifically spoiling the few instances of excitement that are present within the campaign, these missions also represent some of the best moments of spectacle that rival the recent films, as players attempt to board, halt or escape large-scale vehicles while taking on fodder vehicles and avoiding oncoming obstacles.

With such limited replayability for most of the single player missions thanks to a lack of customization and progression, Online Ops serves as the only mode with any sort of potential longevity, where three factions of three players each attempt to accomplish objectives in closed-off sections of the available maps. The nice assortment of available modes and maps helps keep each match feeling relatively fresh, along with a solid roster of available vehicles, each with their own pre-assigned abilities and a decent amount of unlockable customization options. The heroes and villains are typically tasked with opposing goals, such as taking down or protecting an AI-controlled vehicle or reaching and staying alive in certain areas, while the cops faction attempts to bust both groups by repeatedly taking down players. Even after being busted, however, other players will continue to respawn, making it nearly impossible for a police victory, and most matches tend to devolve into demolition derbies with little regard for the objective at hand. Plus, even in the first week of availability, finding enough players to get a match started proved to be challenging, likely making it tough for future new players to get the opportunity to even experience the other big component of Fast & Furious Crossroads in the weeks and months to come without any substantial changes.

For a AAA published title that’s released at the end of a console generation at full price, Fast & Furious Crossroads looks shockingly out of time, with graphics that hail back to previous console generations when these licensed movie games were more common. Most of the main character’s faces look solid, but the vehicles and environments have bland and basic textures, while the noticeable pop-in and terrible explosion effects blatantly ruin several instances of spectacle or drama. Outside of a few hip-hop inspired tracks, much of the soundtrack could be ripped out of any other run-of-the-mill action movie without a second thought, not that it can typically be heard over the incessant dialogue. Fortunately, aside from the dated presentation, the technical performance of the game is mostly problem-free, with minimal glitches, frame drops or lag when playing online.

Fast & Furious Crossroads is yet another uninspired licensed game with lousy driving mechanics, dated graphics and a short, forgettable story. The few unique ideas Slightly Mad Studios does bring to the table, like the ability to easily switch between multiple drivers with unique gadgets and an original multiplayer experience, are bogged down by too many boring missions and droll writing that saps away at most of the opportunities for anything resembling excitement. Even the most dedicated Fast & Furious fans would be far better off with another rewatch of the films instead of buying this game at its full price.