The streets were calm for years once Axel, Blaze and crew were done with them.  After three outings on the Genesis the city was finally at peace, free from the control of criminal overlord Mr X.  A good amount of the time was every bit as idyllic as it seemed, but then Mr X’s children grew up enough to slowly take over, continuing his legacy while framing the original heroes for it.  Wood Oak City is going to explode again and only a serious beatdown can set it back to rights.

When Streets of Rage 4 came out earlier this year it not only served as a great new brawler but also a fitting sequel to Sega’s classic Genesis trilogy.  Created by the same team as the excellent Wonder Boy: The Dragon’s Trap, the team followed the same path as its previous game by paying tribute to the past and not getting overly-fancy with new features beyond well animated hi-resolution sprites and a soundtrack that matches the exceptional quality of its predecessors.  Due to a slight licensing mix-up there are two physical versions of Streets of Rage 4 being made available and the first out the gate is the Signature Edition Games one.  It just arrived this week so here’s everything the box has to offer.

When you get a Signature Edition there are a few things you can expect: nice box with slipcover, signature art card, pins, soundtrack, an extra surprise or two and the game.  Streets of Rage 4 sticks to this formula, creating a nice package that feels properly special.  Starting on the outside is the slipcover, encasing the standard sturdy black box that, as you might notice in the third picture, doesn’t take too much damage if it falls off a cement staircase onto the stones below.  Fun fact: few of these games come back from their unboxing in mint condition. 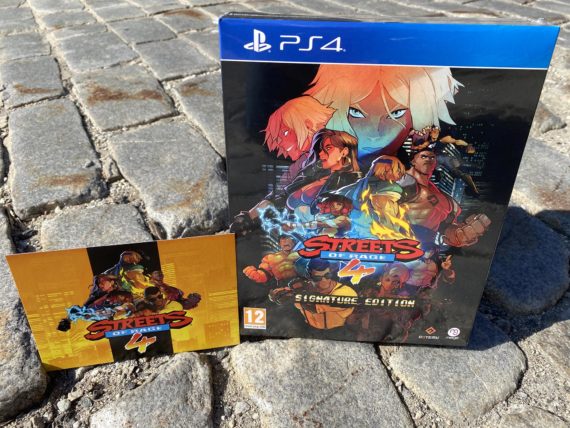 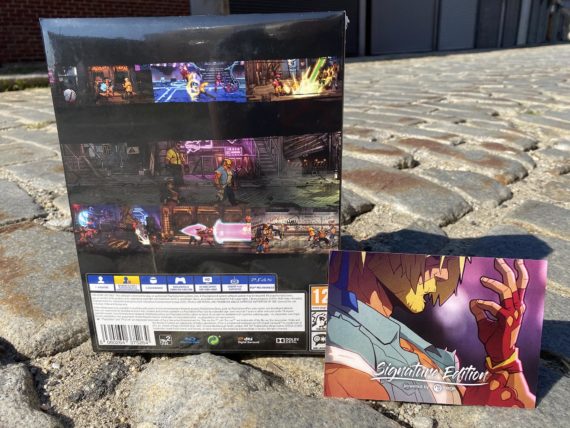 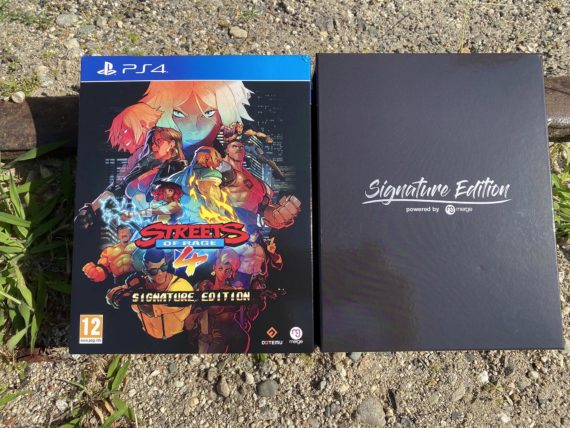 Removing the lid off the box reveals the contents arranged in several layers inside.  The bandanna is in a ziplock baggie on top of the numbered signature card, which covers the game and pins beneath, and the game rests on top of the soundtrack. 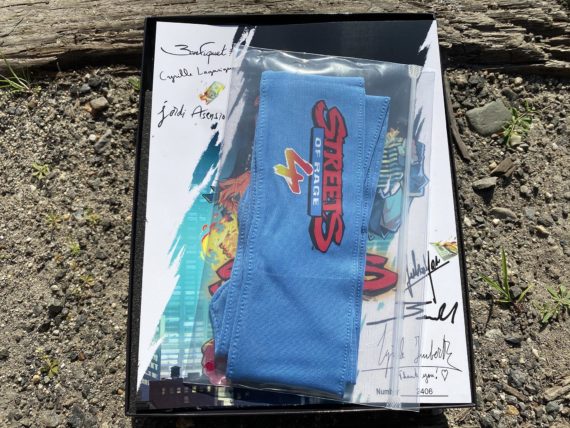 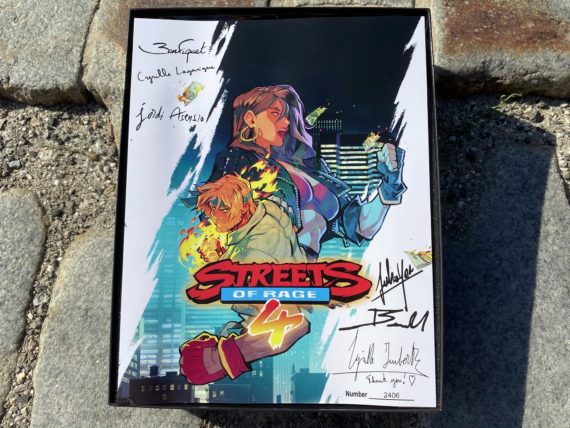 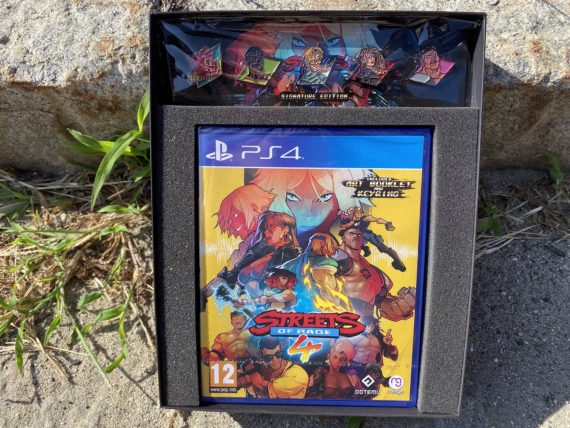 The soundtrack is a beefy collection with two CDs of music.  The 35 tracks cover tunes from the main composer, Olivier Derivier, with all the boss music from contributing guest stars including Streets of Rage originals Yuzo Kishiro and Motohiro Kawashima.  Streets of Rage 4 is easily on the short-list for soundtrack of the year, so while a music CD may not be the flashiest extra, this one in particular practically justifies the big-box treatment all by itself. 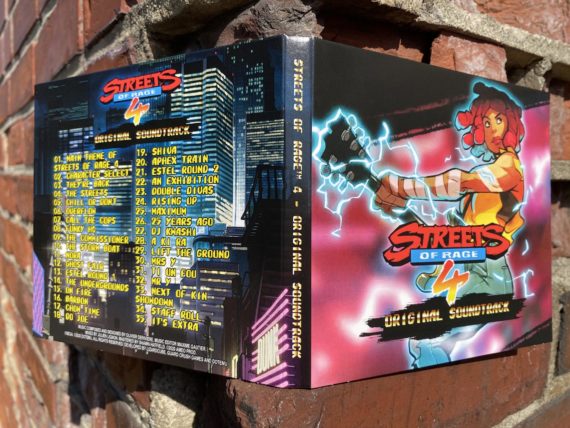 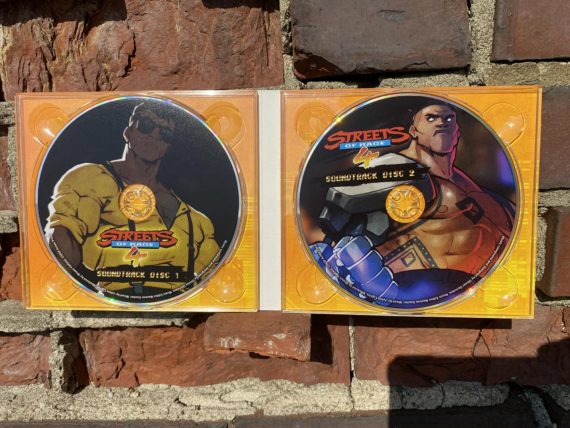 Resting on top of the soundtrack is the game, which is the same version you’d get if you ordered the standard edition.  The cover is reversible, art on both sides, with art booklet and logo-keychain tucked away inside.  The art booklet is character poses throughout, and if you want a closer, high-resolution look they’re available at the bottom of the official Streets of Rage 4 site in Fan Pack 1. 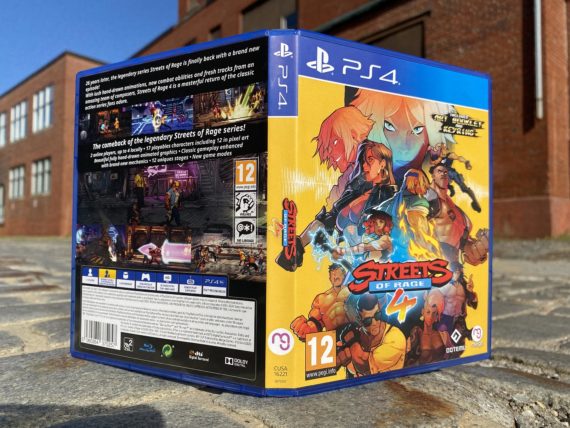 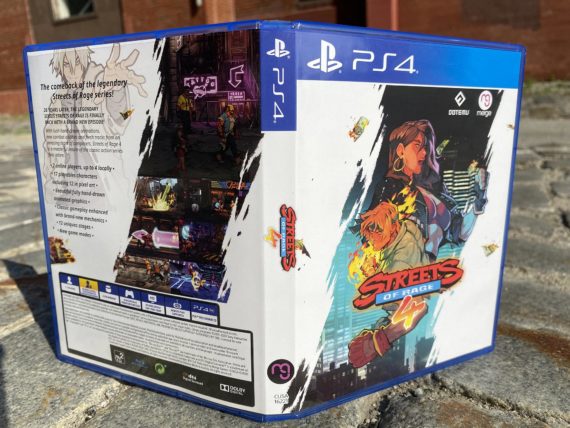 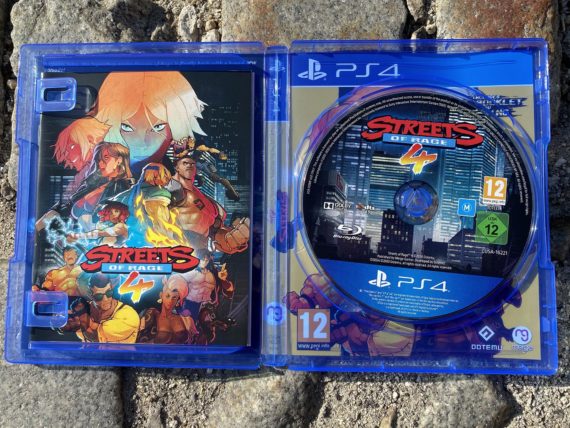 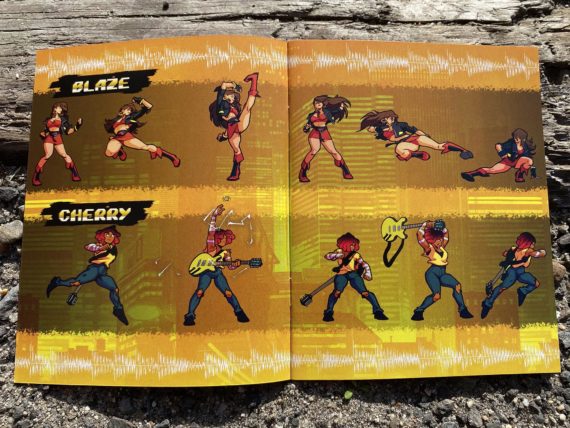 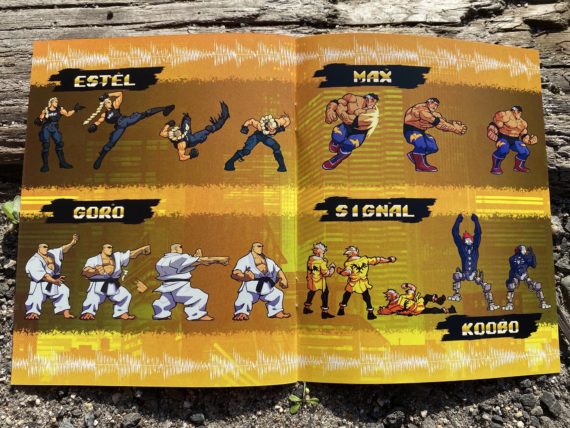 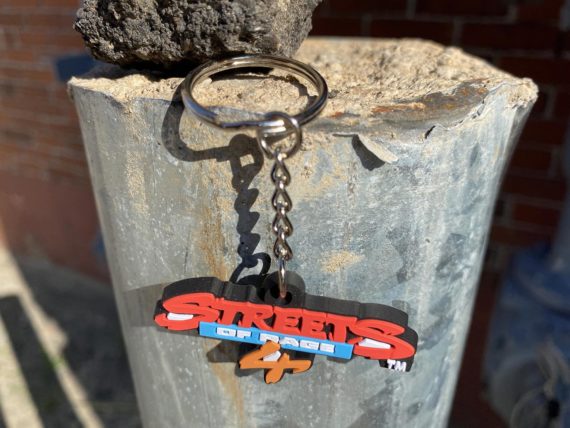 The last parts of the package are the pins and headband, for when you want to bring either a little or a lot of Streets of Rage style on the road.  The five head pins are of the five main fighters, although poor Cherry (with the guitar) somehow came out even whiter than Blaze.  The bandanna is the same blue Axel has been wearing for the last several decades, and comes with a guarantee that just wearing it grants the user the power of the blazing uppercut (Some training required. Please don’t dip your fist in gasoline and set it alight before signing the waiver). 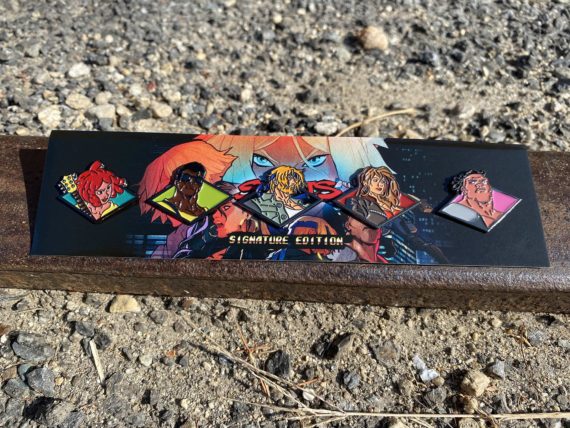 Streets of Rage had been gone for far too long, and while fan versions like Bombergames’ Streets of Rage Remake did incredible work, the series was basically dead until it wasn’t any more.  There was no reason to expect a new one, especially of this quality, and now that it’s available the game warrants a spot on any fan’s shelf.  The Signature Edition is a nice collection of items that range from essential to extra, packaged in a handsome box that commands a nice presence in a collection without overwhelming it.  There’s a lot of fun stuff in the Signature Edition, but the important thing is that after far too long Streets of Rage is back and has an accessible edition that’s worthy of the series legacy.