It might be hard to believe, but Tony Hawk’s Pro Skater first released on PlayStation 1 more than twenty years ago. When it hit the scene in 1999, it not only became an instant hit, it also ushered in a new era of extreme sports video games. Since then we’ve seen a boatload of Tony Hawk-licensed titles across all manner of platforms. Some are now even more beloved than the original, such as Tony Hawk’s Pro Skater 2, while others failed to capture the same highs. Thanks to the longstanding appeal of the original games in the series, Tony Hawk’s Pro Skater 1 + 2 is one of the most desired remasters to come out in the past few years.

The Tony Hawk’s Pro Skater 1 + 2 Collector’s Edition is available on PS4 and Xbox One, though of course the game itself is available digitally on both consoles as well as PC. This Collector’s Edition includes a copy of the game for your chosen console, extra digital content and a limited edition skateboard deck. It’s obvious the skateboard is what gets the most attention in this bundle. It’s also an instance where a special edition pack-in item makes total sense for the game it comes with. All too often collector’s come with cool, but not particularly functional statues or other goofy, useless tchotchkes. Before getting into the discussion of the board, let’s go over the game itself. 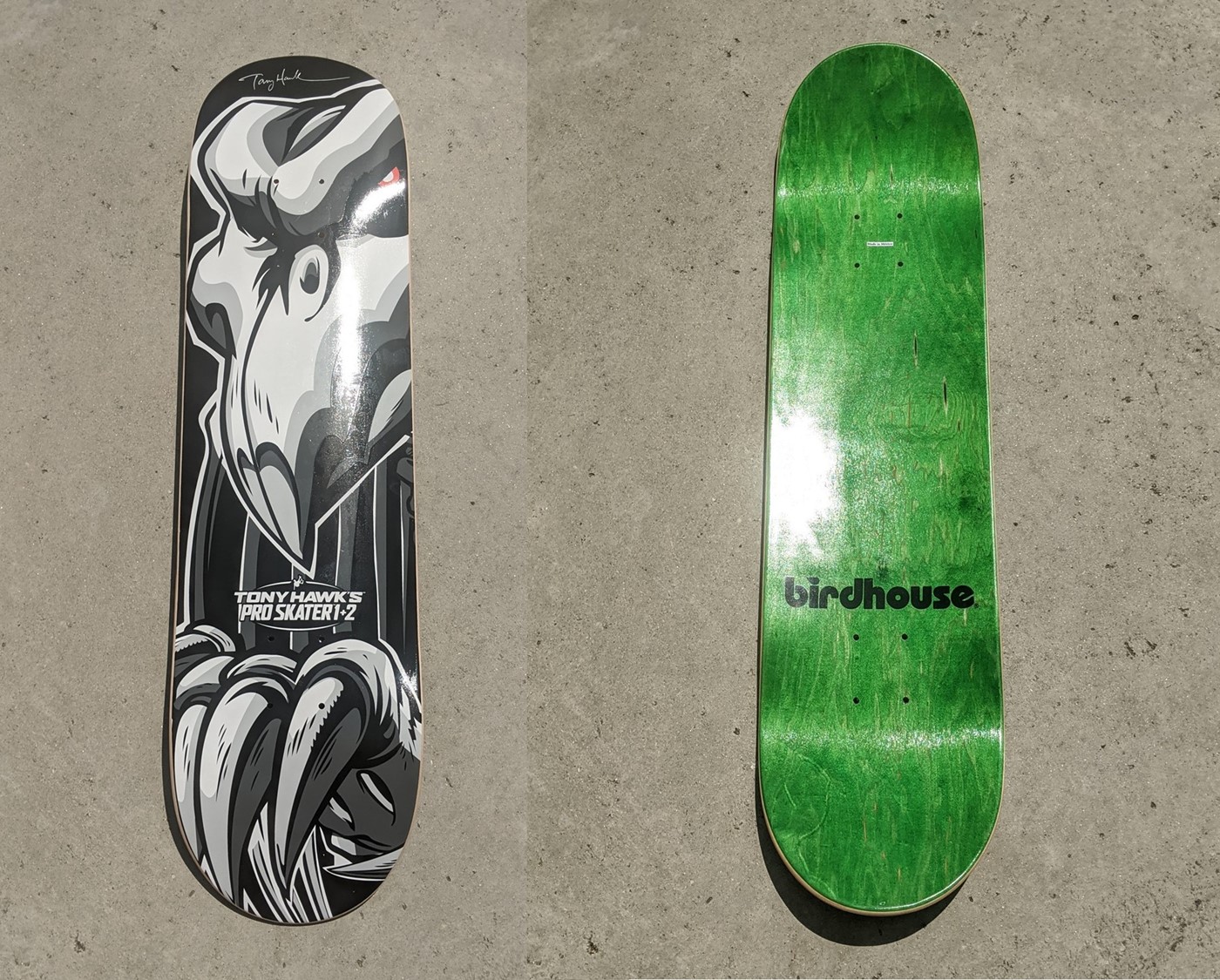 Tony Hawk’s Pro Skater 1 + 2 is included on disc, though additional download will be required to get the complete experience. This is in part because the Collector’s Edition comes with the Tony Hawk’s Pro Skater 1 + 2 Digital Deluxe Edition contents. This includes the Powell-Peralta skateboard brand’s mascot, The Ripper, as a playable character. Also included are a host of retro boards, clothes and gear to choose from in the Create-A-Skater mode. For added fun, some 80s era outfits are also included exclusively for Tony Hawk, Rodney Mullen and Steve Caballero.

Onto the coolest item in the Tony Hawk’s Pro Skater 1 + 2 Collector’s Edition. This is a limited edition full size Birdhouse skateboard deck. Yes, full size as in a standard 31.75 inches long and 8 inches wide, not some sort of smaller scale reproduction or longboard. Birdhouse, for the uninitiated, is a skateboard brand founded by Tony Hawk back in 1992. As such, the deck coming from Birdhouse rather than another skateboard manufacturer makes complete sense for the release of a new Tony Hawk’s Pro Skater game. 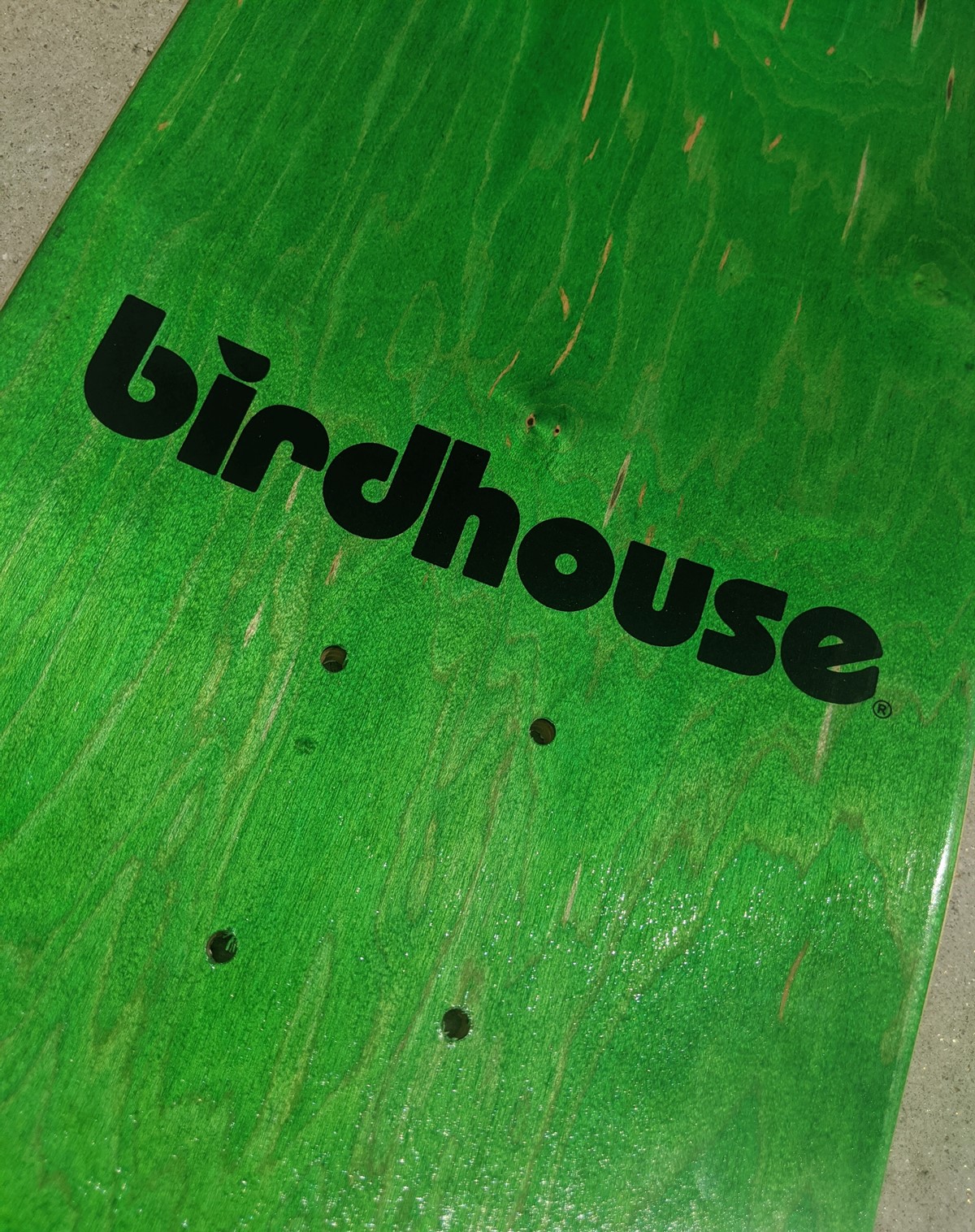 The deck can be used for real skateboarding, though most probably intend to keep it as a collector’s piece instead. Please note that if you do want to actually ride this board that only the deck is included in the package. You’ll have to supply your own trucks, wheels and grip tape (and of course a helmet!). The board is a standard popsicle shape. The top of the board features a green coloration and traditional maple finish with Birdhouse logo in black. The bottom of the board is where the true artistry comes in.

The Birdhouse brand has released a number of Falcon designs on decks over the years and the deck included here is a re-issue of the iconic “Falcon 2” design. The biggest differences from the original design and this version is the Tony Hawk signature printed at the top and Tony Hawk’s Pro Skater 1 + 2 logo near the bottom. It’s a gorgeous reproduction that pops. The only disappointment came with the specific deck in my set. Unfortunately, there’s a single cut that extends from the top of the board to the “H” in Tony Hawk’s signature. Chances are this was a one-off fluke, but it’s disheartening all the same. This cut likely didn’t occur from shipping because the Collector’s Edition is designed such that the board is housed snugly within two foam inserts, preventing it from moving much at all. 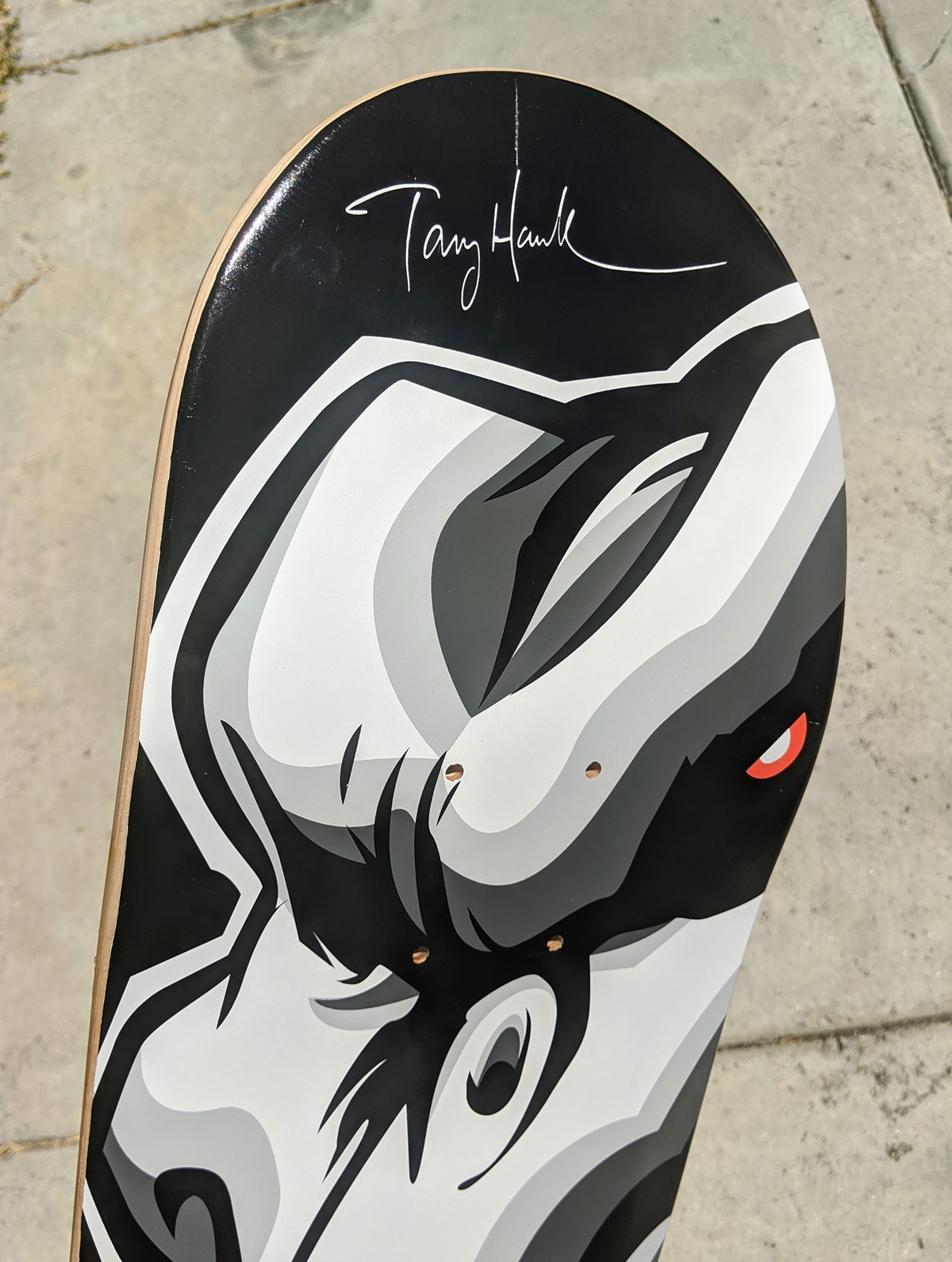 Given that skateboard decks typically cost anywhere from $30 to $80, with Birdhouse decks trending on the higher side, picking this set up is a bit of a steal. The Digital Deluxe Edition costs $49.99 and the entire Tony Hawk’s Pro Skater 1 + 2 Collector’s Edition costs $99.99. Even at $50, this deck is absolutely worth it and more. Those who adore the Tony Hawk’s Pro Skater franchise but don’t want an actual skateboard can still pick the game up physically or digitally and have a blast.