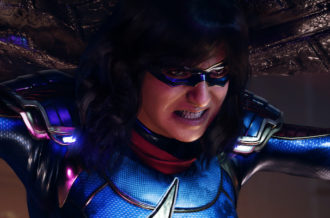 One of the great storytelling tropes is that of the dysfunctional family and the history of entertainment is packed to the gills with stories of people who shouldn’t be within fifty miles of each other.  The great cliches live on because they ring true and few have been around longer than the giant broken screwed-up family of the Greek gods.  They’ve fought, argued, betrayed and killed each other in more ways than legends can count, to the point where it’s a wonder that humanity could have wrested a civilization out from the struggle of Zeus sleeping with anything that had two legs and (usually but not always) curves while hoping Hera wouldn’t find out.  The classic Greek pantheon was a dumpster fire of tangled relationships, but it made for great storytelling that’s survived thousands of years beyond its religions’ expiration dates.  Gaming is no stranger to the setting, with the latest to use it as a giant playground being Ubisoft’s Gods and Monsters.

Gods and Monsters was announced last year with an ambitious release date of February 25 and then everything went silent.  February came and went without a peep and the next six months didn’t bring any explanation as to what happened.  As it turns out, what happened is that games are big and tend to take much longer than even experienced developers plan for, and frequently go through changes along the way.  Ubisoft announced today that Gods and Monsters is now The Game Formerly Known As Gods and Monsters, except it’s actually Immortals: Fenyx Rising.  I got far too little hands-on time with Immortals the other day, with a multi-hour session disappearing in what felt like minutes, and can confirm that the extra time has been put to good use creating a giant open-world action-fest through lands that have almost as many puzzles as monsters. 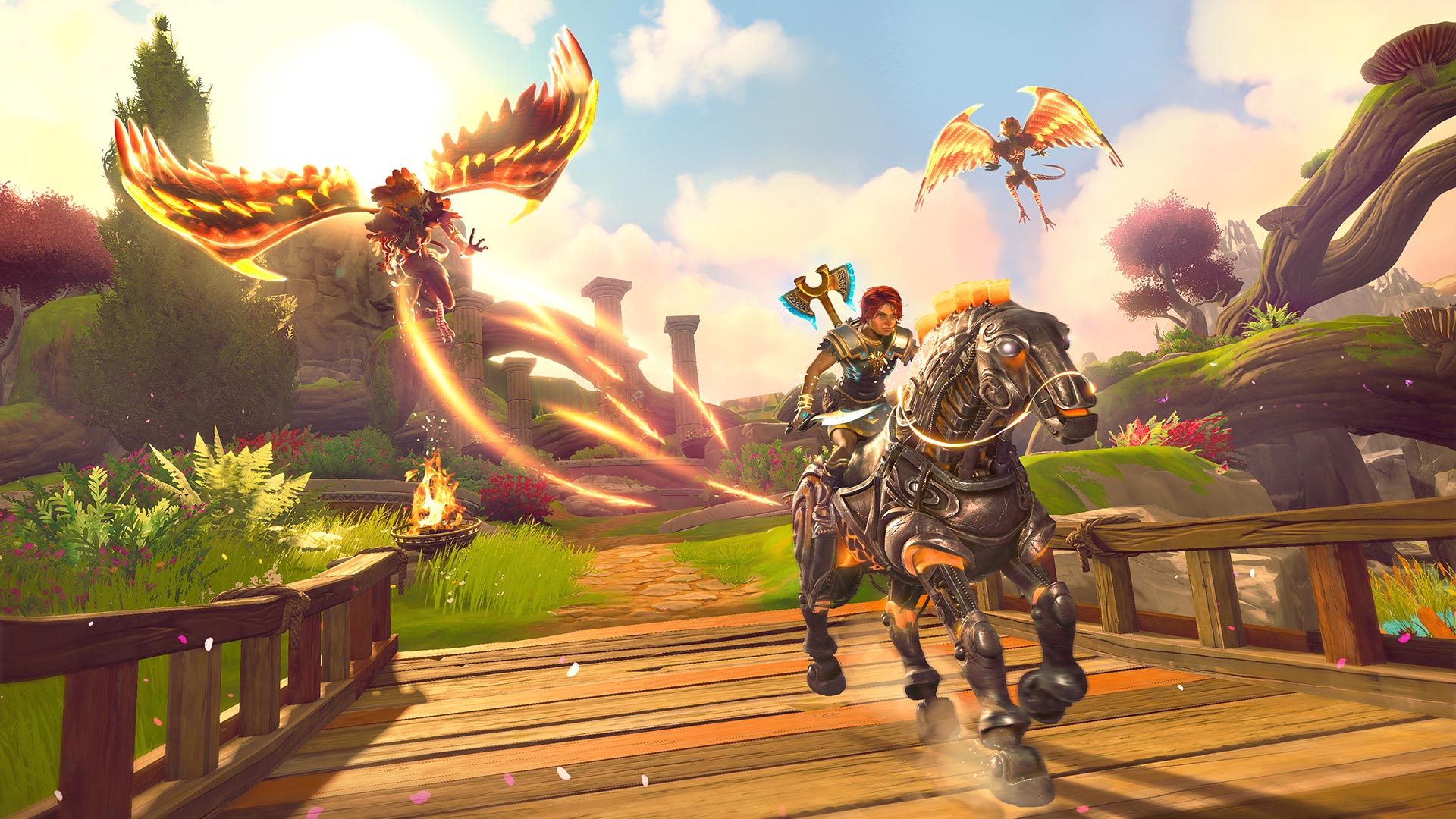 Immortals: Fenyx Rising tells the story of Fenyx, a young woman who’s the latest demigod to spring up from divine infidelity.  While her parentage is left unexplained, she’s undeniably strong enough to hold her own in lands overrun with the beasts of mythology.  Fenyx is a powerful fighter in her own right, but blessed with the gods’ favor she wields magical weaponry that lets her go toe-to-toe against monstrously huge enemies.  Her basic attack is a sword swing, capable of being worked into a nice series of strikes, and she’s also got a big axe for the heavy hitting.  It doesn’t take more than an encounter or two to start experimenting with different combos and the combat opens up even more when taking divine abilities into account.  Every move takes a slice off the stamina bar, whether it be a small amount for a basic attack or significantly more for a massive hammer smash, so Fenyx can’t just open up on everyone.  Instead she’ll need to figure out the best way to ration the moves out so that she’s not left short on a parry or dodge when it’s really needed. This only really becomes a limitation in the bigger fights when half a dozen enemies or more are running around, or against a giant boss creature, but there’s nothing like running out of energy mid-fight to make you try to lay off the button-mashing.

While there’s no shortage of monsters wandering the lands, they mostly hang out around points of interest.  An old temple or watchtower makes a nice base, but after everyone is cleared out there’s generally a puzzle of some sort left behind.  Step in the magic circle to fire up a torch and use it to light a guided arrow to the other torches that deactivate a gate, for example, or figure out the best way to get boxes on top of pressure plates inconveniently sitting on top of a tower.  Being time-limited I had to leave several of the ones I ran across unsolved, because it’s always quicker to beat on critters than figure things out, but the landscape is covered with puzzles that lead to a huge amount of rewards for those who take the time to earn them.

While my time in Immortals was limited to one of its lands, the full game will have seven areas modeled after a god apiece.  The demo area was all of The Forgelands, Hephaistos’ realm, which leaned towards an ancient steampunk style.  Old machinery could be found all over and the enemies tended towards being robotic.  Other lands may be greener but from what’s been shown so far all of them will have rocky landscapes with plenty of verticality to play with, but it will be hard to get too lost due to the sheer number of landmarks and unique statues.  Fenyx can run wherever she needs to, climb up any wall or cliff so long as her stamina holds out, call a mount to gallop across the fields and even pop out the wings of Daidalos to soar across the sky, although again for as long as stamina holds.  The world is her playground, with a huge number of areas to explore, and it’s never a bad idea to get a little height and scout for points of interest.

While there’s no shortage of side areas to discover the main quest involves the rise of the titan Typhon, who’s not too happy being chained under a volcano by Zeus.  While the story could be told straight-faced it’s actually done with a strong sense of humor.  Fenyx may not talk much but Zeus and Prometheus tend to bicker a fair amount, and are more than happy to acknowledge their video game nature.  The quest to overthrow Typhon may grow to epic proportions but it won’t be one that takes itself too seriously, making Immortals: Fenyx Rising a game that feels like it wants to be fun more than anything else.  There’s a huge world of myth, monsters, quests and puzzles waiting to be discovered, scattered across a land that’s pure video game from the top of its ridiculously huge statues to the deepest pits where optional bosses wander around, and while Fenyx may have her work cut out for her, she’s going to have a great time tracking down every one of its secrets.