Razer has always been a company to go all out with its hardware designs, which is exactly the case with the 2020 edition of the Razer Blade. The 2020 edition is available in a Base Model, Advanced Model and Studio Model. The pricing has always backed up what you are getting with the package and that also remains here. We were sent the Advanced Model for this review and Razer has implemented clever options here to balance out battery power with performance and heat.

The Razer Blade 2020 Editions all come armed with the latest Intel 10th generation i7 processors with the Advanced Model getting an eight-core i7-10875H CPU while the Base gets an i7-10750H. Both max out with Intel Turbo at 5.1Ghz, which is insane for a laptop processor. The Base model comes with NVIDIA RTX 2070 SUPER graphics while the Advanced gets the 2080 SUPER, but not a TI version. These are, of course, mobile video cards. The Base is also armed with either the choice of a 144hz FHD display or a 4K OLED option while the Advanced gets the overkill. Razer included a 300hz FHD display which comes across as perfect for eSports competition. Does that allow for framerates even close to that? Lastly, both models will include Wifi6 wireless compatibility and a 1 TB PCI-E drive that’s upgradable to 4 TB.

The system recognizes 16GB DDR4 RAM that’s rated at 3200Mhz and is upgradeable to 64GB, but the promotional materials and what Windows reads is at 2933Mhz. That’s fine, honestly, but most motherboards allow for further overclocking. If the RAM is capable of this, it’s worth a shot to at least try and get those speeds. I believe in the entire effort to keeping the heat and battery performance intact, there isn’t much tinkering you can do to the machine. The BIOS feels like it was pulled straight from 2000. It’s barebones and doesn’t allow to alter any XMP profiles or any type of overclocking. So if you’re type of person that nitpicks or wants to adjust settings for maximum performance, this will turn you off.

The aspect that makes this machine so clever are the dual graphics options. Not only does the Blade Advanced include the 2080 SUPER, it also includes Intel on-board graphics. This can severely help the battery life as it will automatically switch back and forth using NVIDIA Optimus technology. You are able to turn this off and run with the dedicated GPU the entire time. The refresh rate can be dropped to either 60hz or 240hz to further help with that. Fans can be automatically mediated via the software or setup manually. Personally, I ran the unit plugged in with everything maxed.

The fans at full load get loud as Razer made sure the performance potential was there but tried to include aspects to help balance all of this out. The battery with full performance lasted just under two hours. I wouldn’t recommend having all of this cranked while on the go. Otherwise you can expect to at least double that time. As for the heat, this thing gets hot while under load. During games, the GPU would range from 80-90 degrees and that still sits in the safe zone for the actual part, but the keys begin to warm up and where the processor sits just below the screen gets extremely hot. I found it hard using the keyboard to game, so I ended up switching to a controller for games that I could. The CPU would normally sit in the 60 degree range during load, but due note it gets hot.  To attempt to help with the heat, Razer has included a full vapor chamber cooling system server-grade graphite seen in multiple layers of the interior. It would be hard to imagine if these materials and design weren’t implemented how hot this laptop could get. There’s also a dual fan design which would account for why the fans gets so loud under load. This also includes a large heatsink that basically covers the top half of the motherboard. Heat exchangers also allow for maximum dissipation of the heat.

Getting to the design of the unit, the Blade remains a low profile black with the Razer logo on the cover. The keys are good for a laptop, but you won’t see any type of Razer’s mechanical switches here. It’s tenkeyless and supports per key Chroma via Razer Synapse on the Advanced Model. For 2020, the Shift key was made larger on the keyboard while the arrow keys were cut in half. The overall design of the Razer Blade remains thin and lightweight with a focus on minimizing exterior dimensions and maximizing interior. Both models feature a free-form chassis comprised of aluminum while the exterior is a rugged matte texture that’s almost rubber-like, but is also scratch resistant. The trackpad is rather large and extremely smooth and sensitive. It was rather easy to use, but wasn’t used to the size. Overall, the interior and exterior design are clever and implement as much technology for heat and comfort that are possible.

The screen is 15.6″ with all models being individually calibrated and while it doesn’t look as good as a desktop monitor, the color saturation stands out when given the opportunity. The 300hz FHD screen covers 100% of sRGB color space, so the screen isn’t lacking along the edges or specific areas. The lighting makes the image look a bit soft overall and the display doesn’t support HDR. The most underlying aspect that woke me up to this screen was watching videos. It’s seriously something I haven’t experienced in the past. Everything seems to render fast and pick up every detail. The Godfall trailer made me realize the potential of the next generation of gaming. It is the perfect exampled to show off what this screen can do. Bright and vibrant colors mixed with action that featured no blur and was fully fluent just absolutely blew my mind. The opposite side of that is if a video is running at a lower frame rate, you will notice it even more. This is with the display maxed at 300hz.

For benchmarks, I ran with a variety of titles. With the currently limited amount of RTX games, I wasn’t able to include any in this benchmark. I feel the Razer Blade Advanced Model has the possibility of being the ultimate eSports gaming laptop with its high refresh rate display. Unfortunately, these titles didn’t come close to even surpassing 200 FPS. I did do a test with Apex Legends on low settings and didn’t see a big bump in performance. All of these games were ran at maximum settings. There are a few things worth noting that I experienced. The first is that I am a lot better at Apex when using this setup. The high framerate makes a huge difference, but that can be obtained on a 144hz display. I also attempted to test Modern Warfare, but it would never connect. I troubleshot everything I could, but could never even get into the game.

Apex ran fluid and looked great on this screen. GTA V also felt like the potential of the visuals were maximized. Going with a RTS, A Total War Saga: Troy may have been the least performing of the bunch, but the experience was exceptional. Diablo 3 also was no slouch on this setup as the vibrant worlds stood out. Doom Eternal was also a blast to play in with the fast pacing. I finished up the list with Destiny 2, Forza Horizon 4, World War Z and Remnant From The Ashes. You can view the breakdown of the benchmarks below, as Doom seemed to be the most consistent experience. 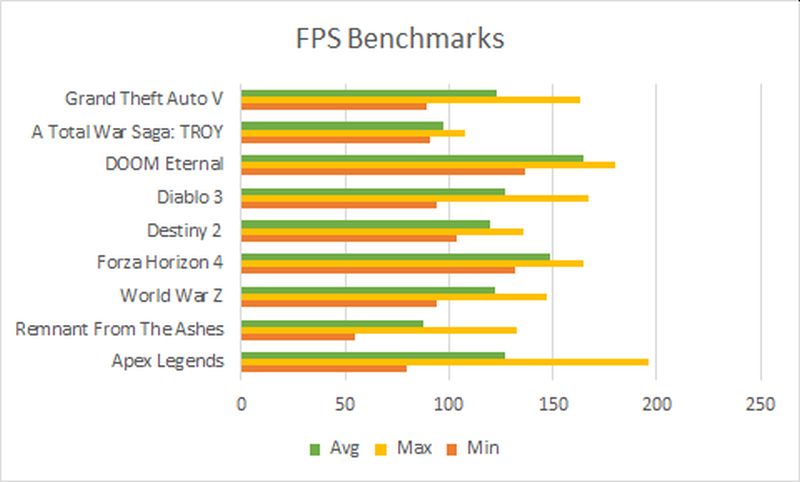 In terms of pricing, this version of the Razer Blade Advanced Model comes in at $2,999. Obviously, if you’re in this market, price is no issue, but in terms of 1080p gaming at a high refresh rate, the Base Model I feel would offer comparable benchmarks and a similar experience for less price. I’m a huge fan of this Advanced Model, as doing everyday tasks or even capturing video is seamless and fast. The screen, especially for watching videos, is nothing short of a game changer. If the framerates were averaging above 200 on titles, I feel this would be worth the extra money. As the benchmarks show, however, it seems games could get this with G-Sync and a 144hz display. I enjoy the technology implemented to help with the heat and the design, but this gets hot under load. Overall, the Razer Blade Advanced Model is fantastic despite some oversights and slight issues.