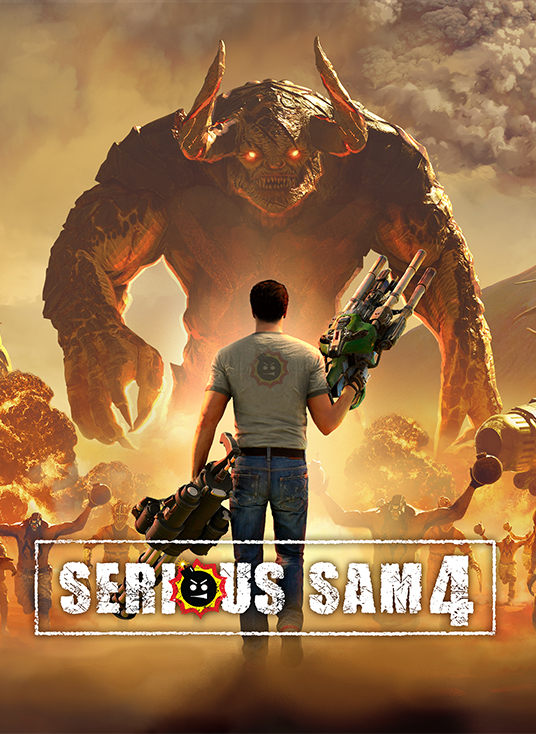 A long time ago in a PC with laughable specs by 2020 standards, “Serious” Sam Stone went up against the forces of all-powerful invader Mental.  The story began in the middle, with Sam dropping into ancient Egypt through a time portal, and at the time the assumption was that Earth’s scientists had sent him back.  That wasn’t quite right, as Serious Sam 3: BFE revealed, taking place just before the events of the very first game and ending with the moon being dropped on Earth as Sam went back in time.  That seemed to take care of the prequel aspect quite nicely but nope, there’s still room for one more story prior to Sam’s journey through the portal, set on a planet tired of a losing war but fighting back as hard as it can.  Serious Sam 4 takes place on an Earth battered but unbeaten, with Sam getting plenty of help in his war against Mental.

One of the defining features of the Serious Sam series is that he’s a chattier Doom-guy or a less annoying Duke Nukem, fighting alone against the horde while a throwaway plot provides a paper-thin reason for a change of scenery between levels.  Enemies swarm by the dozens and Sam mows them down with an arsenal that starts reasonable and becomes more ridiculously powerful as the game goes on, but no matter how strong the weapons get it’s still just barely enough to hold back the massive charging werebulls, endless skeletal kleer, biomech walkers armed with lasers or missiles, and of course the screaming headless kamikazes.  While Serious Sam 4 has a few new wrinkles its biggest addition is story, and although not particularly complicated, it’s still good to see Sam’s well-established personality given a little more depth by interacting with people.  The first level introduces Sam’s crew, and despite the characterization being deep as a bottlecap, it’s still fun to see.

Giving Sam more personality than a one-liner machine and a cast to interact with is a surprisingly welcome addition, but it’s by no means the main draw of a Serious Sam game.  The whole point is to shoot huge numbers of bizarre enemies in wide-open environments, breaking up the set-piece battles with a search for whatever secrets the levels may hold.  Serious Sam 4 is built squarely on this formula but throws a number of new twists to freshen up both the overall game and the level-to-level experience.  First and most obviously it’s not set anywhere near Egypt, with the bulk of the action taking place in Italy and France.  The town streets and ruins of Italy are used to great effect for some standard point A to point B levels, but things get a bit more open when it’s time to head to France. 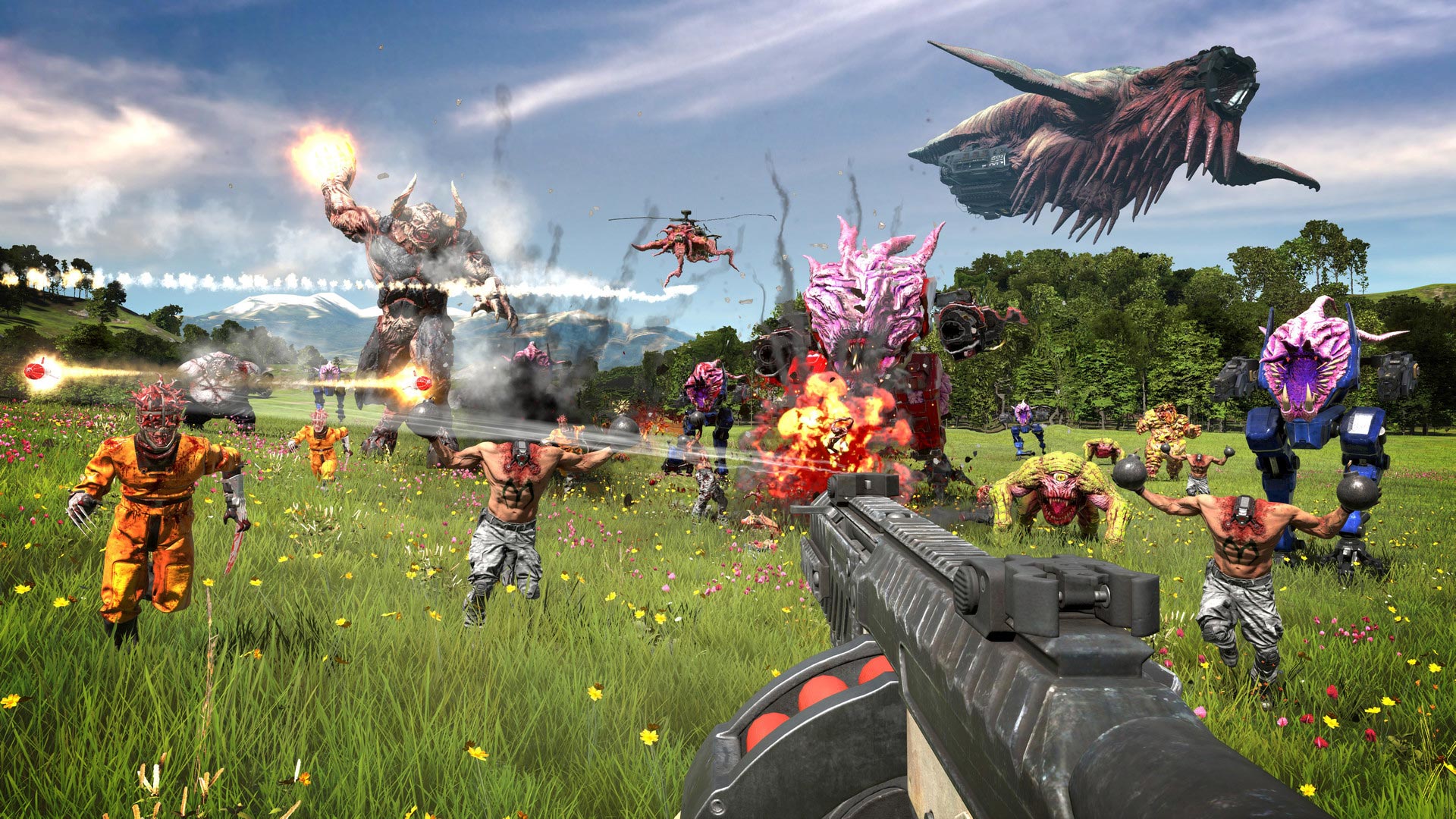 Another new feature of Serious Sam 4 is that it’s capable of open-world levels that stretch on for miles, and while most of the game is a more directed experience, the first few levels of France plunk Sam down in the countryside.  There’s always an indicator showing which way to go, no matter what type of level it is, but if you want to explore the terrain to see what it might hide there aren’t many walls to hold you back.  As it turns out most of the countryside is pretty but empty, but it’s also large enough that I can’t say for sure I didn’t miss a few secrets.  One of the fun parts of the larger maps is that they’re a little too big to cover on foot so vehicles pop up on a regular basis.  The ATV is a lot of fun, no question, but nothing beats driving a grain thresher through a swarm of kleer.

In addition to the main objective, each level also has a couple of bonus areas to explore.  These are clearly marked, so you get a choice to ignore them or not rather than having to worry too much about missing one, and each one is tagged with a reward.  Sometimes it’s a new weapon, such as the ridiculously overpowered rocket-propelled homing chainsaw, while others provide new gadgets.  Honestly, the real reward is “more things to kill,” but it’s always nice to come out with a black hole generator or enemy-distracting holo-Sam.  The devices aren’t strictly necessary but being able to pull out something to help with the more intense encounters can be a major relief on the sixth or seventh attempt. 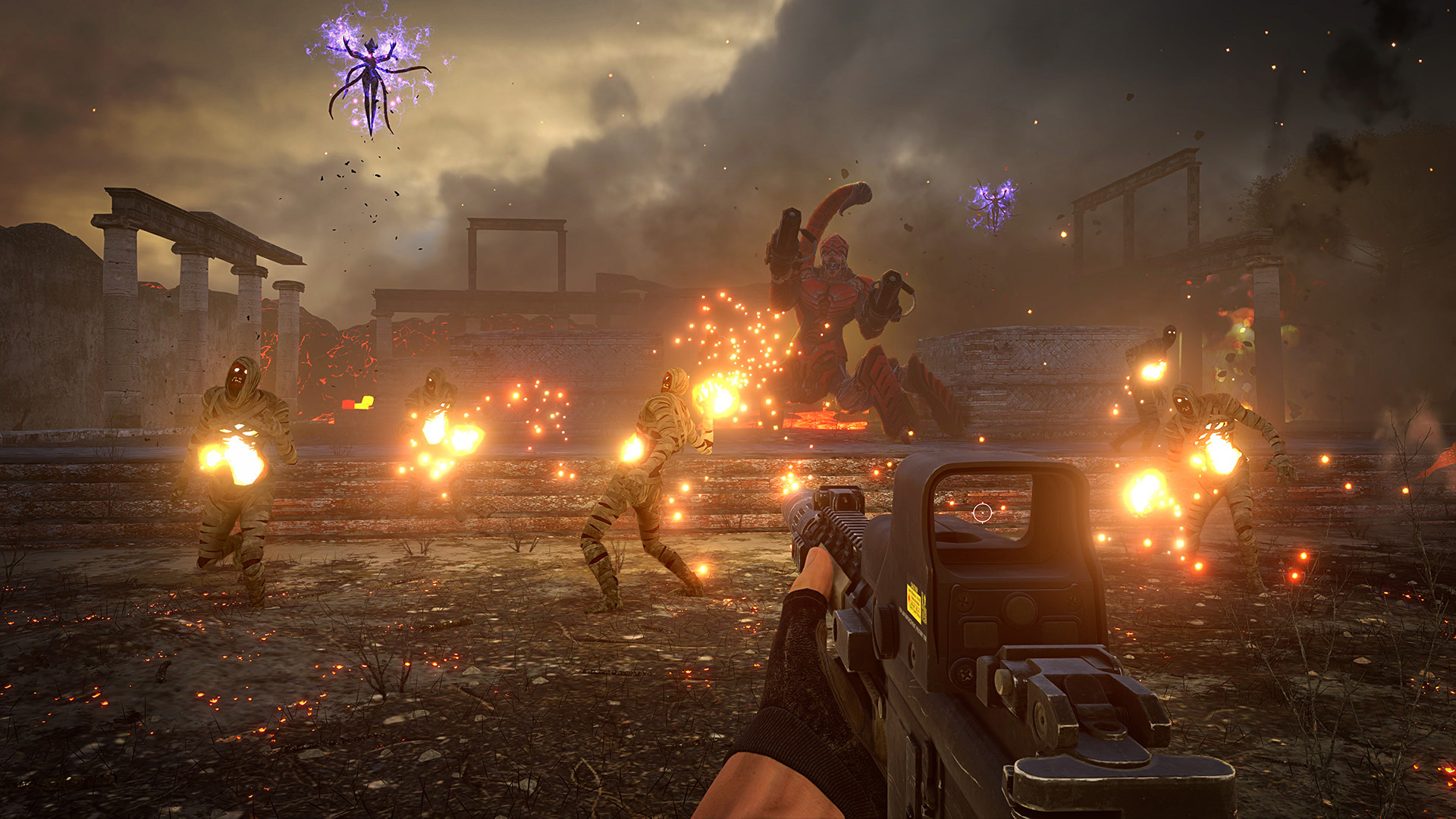 The primary force comes in the form of weapons, though, and there are a ton of great ones to chase down.  The usual pistol, standard and double-barreled shotgun, assault rifle and minigun all make a return, and it wouldn’t be Serious Sam without the rocket launcher, but the auto-shotgun is a brutal fast-paced punch of gore and happiness.  The homing rocket-chainsaw, as mentioned, is as fun to use as its ammo is scarce, while the returning favorite Devastator makes short work of whatever it’s pointing at.  The weapons all feel nicely powerful, which would be much more of an advantage if the enemies didn’t attack in such numbers that they can easily soak it all up and tear Sam to pieces.

As the levels wear on and the fights get bigger Sam has one more major new trick to aid in survival, a skill tree.  Every now and then you’ll find a wooden box and inside is a large purple sphere.  Cracking it open earns a single skill point, which is all that’s necessary to activate a node on the tree.  It’s not a complicated system but does allow you to choose a direction of growth, so if being able to ride a werebull is more important than increased firing speed after a reload (which it definitely is) then you can work your way towards it.  There are only seventeen perks to choose from, which means that all of them are useful in some fashion.  Who wouldn’t want to dual-wield the minigun and rocket launcher, after all? 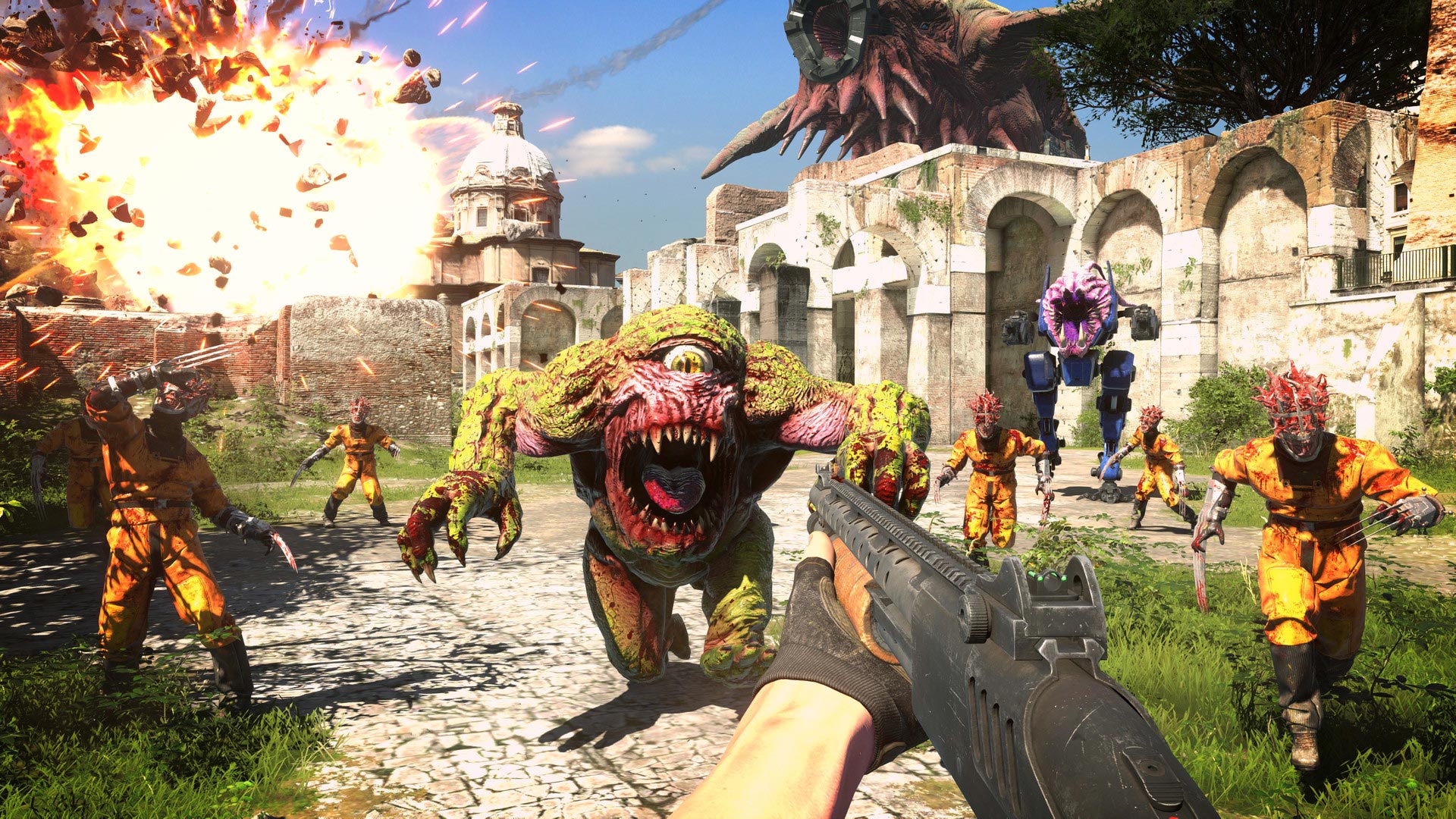 Serious Sam 4 is easily the richest game in the series, expanding on the character and his world while not holding back on the action that’s been the major draw from the earliest days.  While it starts off gently and takes a bit to ramp up, soon enough rampaging werebulls charge in with a swarm of kleer, backed up by big green four-armed reptiloids tossing homing-spheres, plus a nice variety of new enemies to fill in the herd.  There’s plenty to explore between one major skirmish and the next, with secrets popping up often enough that it’s always worth taking a second look around.  It’s also worth taking a first look, for that matter, because the scenery is almost always pretty, with views of towns and the countryside stretching far into the distance.  Earth is a beautiful planet despite being overrun by Mental’s forces, and amidst all the fast action and heavy shooting Serious Sam 4 takes the extra time to sketch in a story of a world that’s not going to roll over and let itself be conquered.