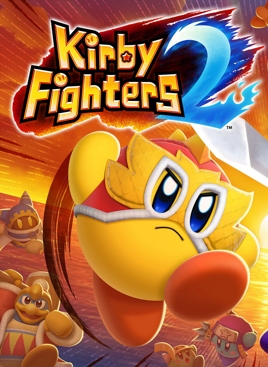 Since his original debut 28 years ago, Kirby has been a fan favorite Nintendo character. An adorable pink blob of a character who is well known for his friendly demeanor and ability to absorb other enemy powers by eating them. Kirby Fighters originated as a side-mode in Kirby’s Triple Deluxe where players could fight on maps using iconic abilities in solo or multiplayer. It would go on to have an expanded version released individually known as Kirby Fighters Deluxe and finally receive the surprise drop of Kirby Fighters 2 just recently. With this being Kirby’s third dip into the idea of its own fighting title, it’s time to examine if Fighters 2 is a good sequel that’s worth picking up.

There’s a small bit of a story to Kirby Fighters 2, as the lovable pink hero finds himself with an invite to a tower where King Dedede and Meta Knight sit at the top awaiting him to come and fight. Kirby takes this challenge on and decides to meet them in battle along with a friend. In order to reach them Kirby must enter the tower and fight his way through tons of enemies in order to travel up the tower. Unfortunately he quickly learns this isn’t as easy as it seems, as many bosses lie in wait in place of the King and Knight duo who require to be beaten in order to get further up. A new challenge awaits every time Kirby enters the tower, so it will take skills and stamina to make it to the top and face off against the biggest baddies in the land.

Kirby Fighters 2 is a platform fighter where players begin by selecting their character, either Kirby with an ability or a friend, and head into an area. There are multiple different modes but in the story players will go into matches against one or two opponents where the goal is to drain the enemies health. Kirby’s attacks depend on the weapon but generally speaking depend on normal directional inputs. There are exceptions and some weapons have a lot more combos than others which can be viewed at any time. With aerial attacks and downward thrusts, there’s quite a bit of variety. Kirby and friends can also swallow or grab enemies to deal damage and the last one with health standing wins. After each match an amount of experience is gained and once another level is reached, new unlockables are obtained. This can be new characters, stages or even story mode ability upgrades such as health or attack power. 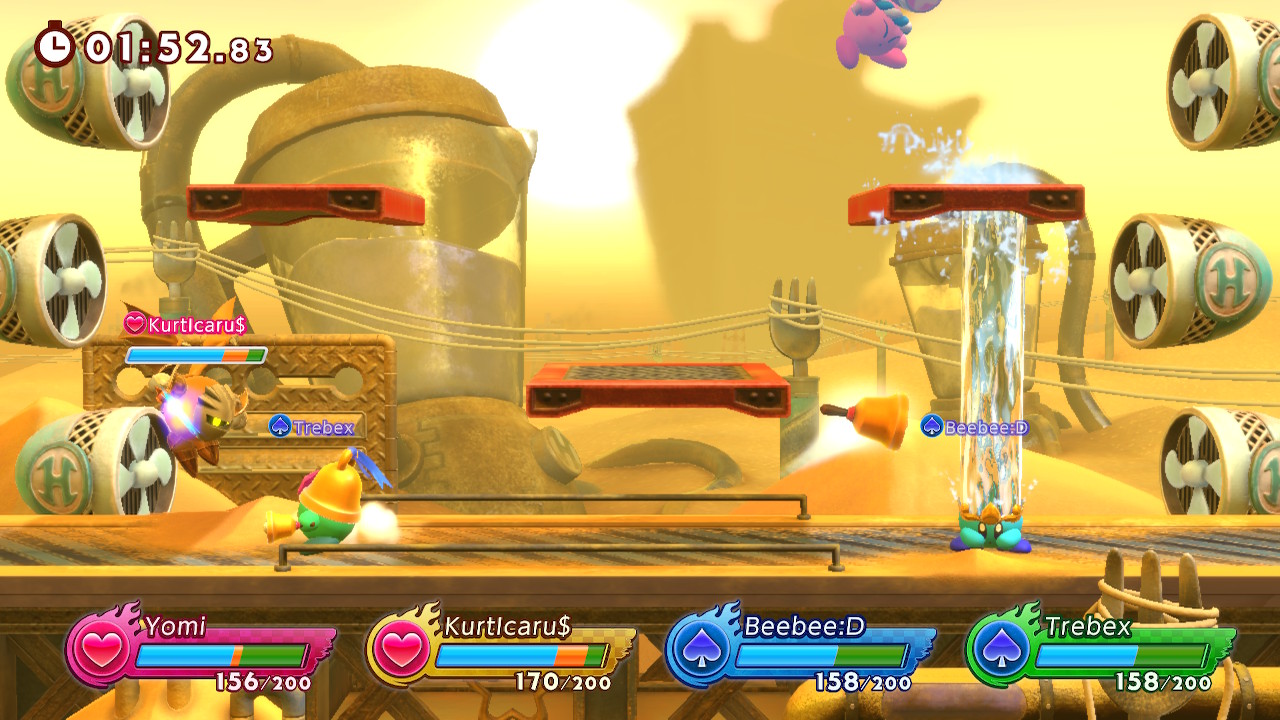 Outside of story mode there’s other ways to enjoy Kirby Fighters. The first is battle mode where players can fight against computers or other players locally in simple chaotic brawls. One of the unique elements about every mode is that when a player is defeated they can, if rule settings allow, turn into a ghost that’s able to attack. Ghosts are slow but if they’re able to land a hit, they come back to life and can continue to fight. This is great for more challenging fights but requires strategy for both ghosts and other fights to keep each other away. There’s also online mode where players can team up with friends or randoms to fight together regardless of location. Online matches with randoms are always 2 v 2 but playing with friends allows teams to be setup however they like. Finally there’s single-handed mode, which despite the name doesn’t mean playing with just one hand. This is a timed gauntlet for one player to reach the ending and get a high score and fast time.

There isn’t a whole lot of variety overall to the different modes in Kirby Fighters. It’s really a cycle of the same stage brawls with different power ups. Despite this, however, it’s an extremely addictive and simple cycle that keeps one going back for more in these short matches. The unlockable system is also exciting, making it tantalizing to see what goodies come on the next level up and back to the grind for fighters points. Even the story mode challenges players by having three different difficulties, and ranking their performance based on weapon and skill. There’s nothing more satisfying than getting a rainbow badge for reaching that perfect score after finishing up. The visuals are gorgeous, right on par with modern 3D Kirby titles that sparkle and shiny with fantastic menu design that’s hard to miss with how charming and lovely it is. Kirby always has fantastic soundtracks, but Fighters 2 brings great remixes and new songs to the challenge that are fun to just stop and enjoy listening to or get heated with in the midst of a fight. 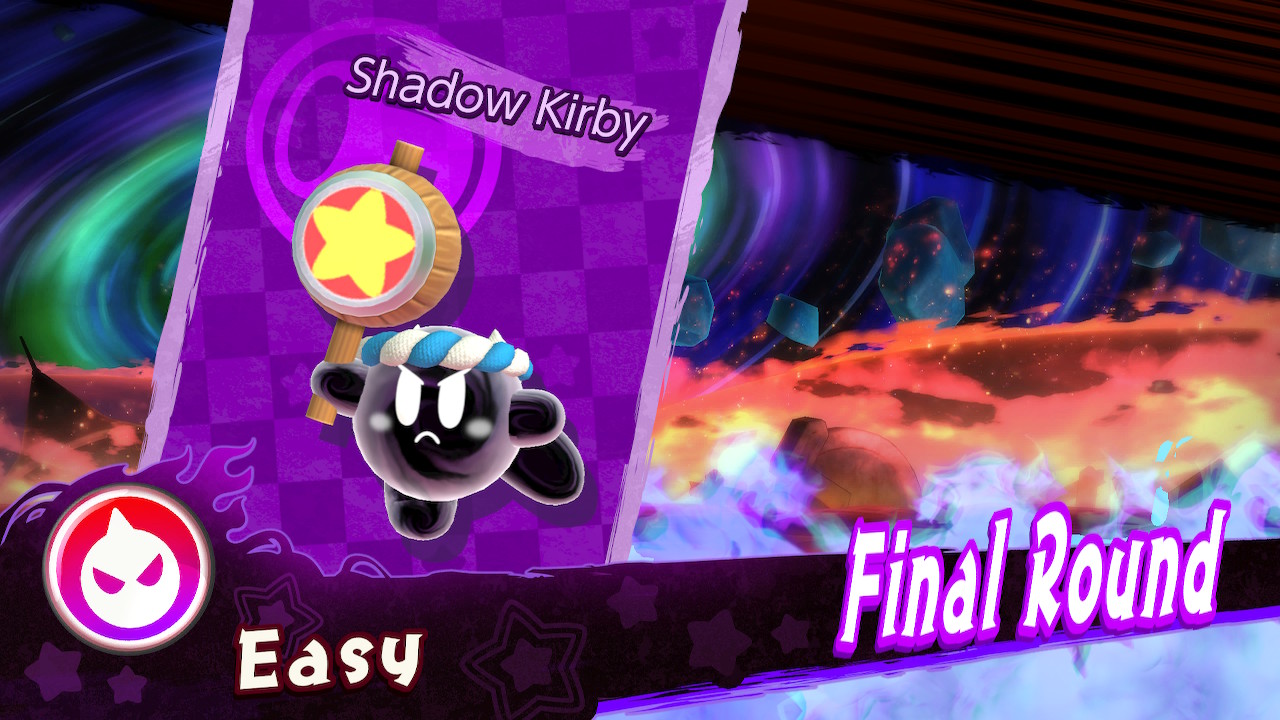 For a title that dropped out of nowhere, Kirby Fighters 2 is filled with all the charm of the average Kirby title but without a world map to explore. The fighting is fun and challenging with a surprising amount of variety in characters. The gameplay can almost start to feel repetitive at times but with fights being so short most of the time it’s easy to switch it up and hop back in feeling refreshed. There’s a lot of value here that gives in to what could be a ridiculous amount of gameplay for people who love completing every challenge. Anyone looking for a Kirby title with faster-paced combat and a focus on fast-paced fights should dive into Kirby Fighters 2.