The future is always a bit farther off than necessary but sometimes, every now and then, it finally shows up.  The future of VR, for example, isn’t a wire connected to a PC but rather two possible branches.  The first one is wireless to PC while the other is an all-in-one unit, and the leader in that tech has been the Oculus Quest.  A few weeks back the Quest 2 was officially announced, and while the retail headsets don’t start shipping out until October 13, Oculus has been exceptionally helpful in getting the review units out early.  Mine arrived Monday morning, and while it’s too early to have an opinion yet (the honeymoon phase is always a lovely time with new tech), it’s worth taking a look inside the box.

Starting from the outside working in, the actual box the Quest 2 comes in is generously sized at 16 3/8″ x 7 5/8″ on the front, 5″ deep.  If you take a closer look you’ll see I got the Japanese version, but that makes zero difference to the internals so it’s more a fun little extra than anything that will affect the overall experience.  The Quest 2 starts off on the right foot even before the plastic wrap comes off, in fact, with instead of a need to grab a knife or other pokey-thing you can just grab the pull-tab and tear.  I refuse to admit how satisfying that was. 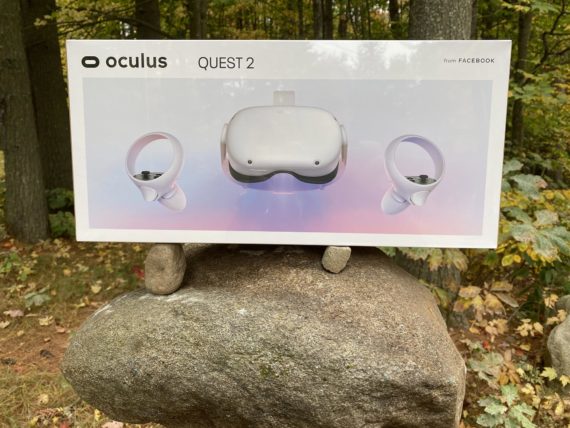 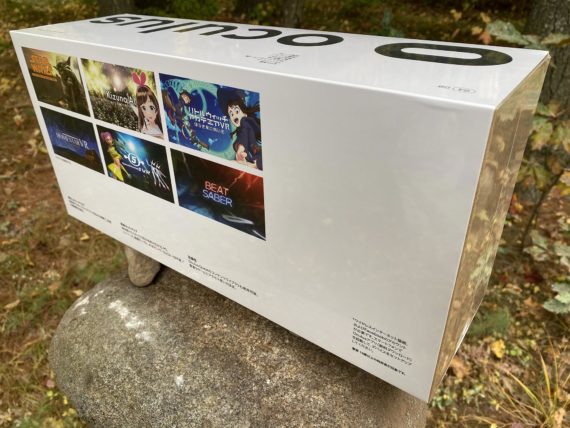 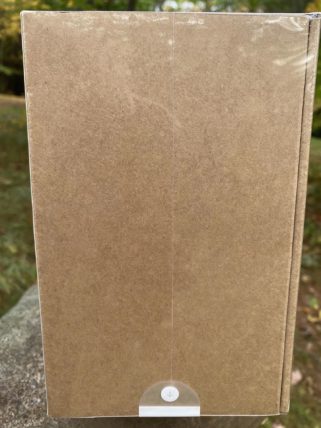 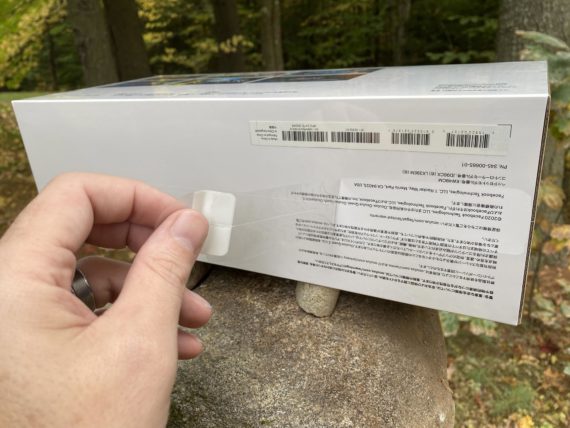 Taking a look inside you can see why I described the box dimensions as generous, and in fact the entire packaging is designed to make a good impression.  With the white slipcover removed from the box, its lid (with a white Oculus sideways-O printed on the top) opens up to reveal every component of the package arranged inside with enough room to show it all off.  Starting with the least exciting part, the little box in the back contains the USB-C charging cable and handy plug, a quick-start Reference Guide told mostly in pictograms and a much wordier Safety & Warranty Guide. 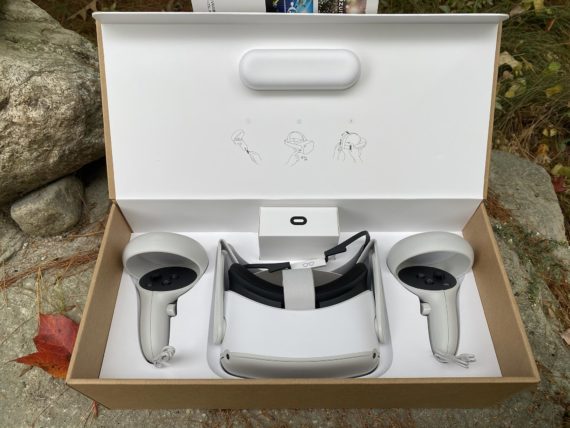 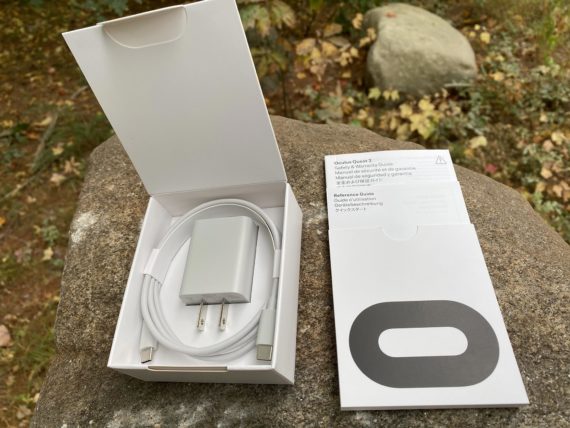 The controllers are the standardized current design, with the circle containing the IR sensors going above the thumb rather than below the fingers for easier view by the cameras in the headset.  Other than that they’re just about identical, although speaking as an Oculus Rift CV-1 owner I deeply appreciate that the menu buttons are slightly curved inward to make them harder to accidentally hit during play.  The controllers also come with batteries pre-installed, which is always appreciated, and unlike the CV-1 the battery cover snaps off and on rather than clicks into place with magnets. 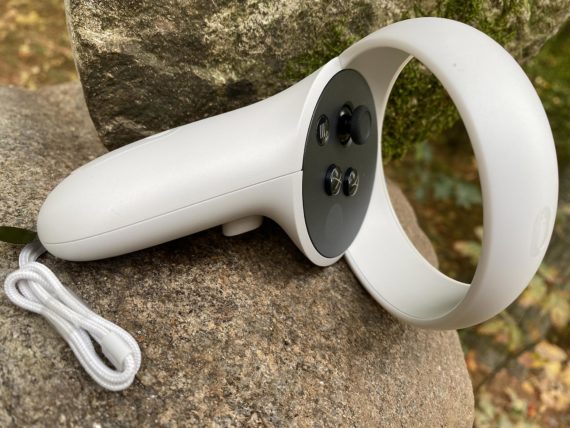 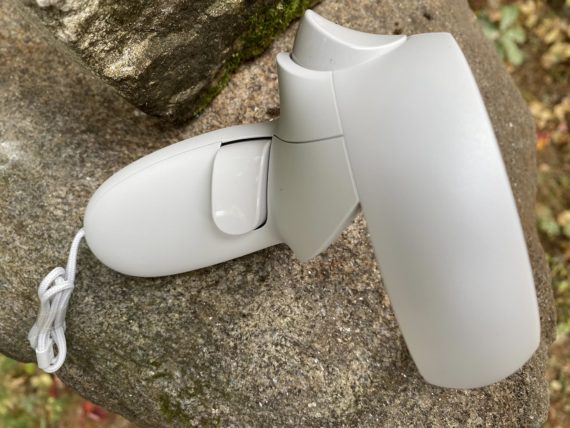 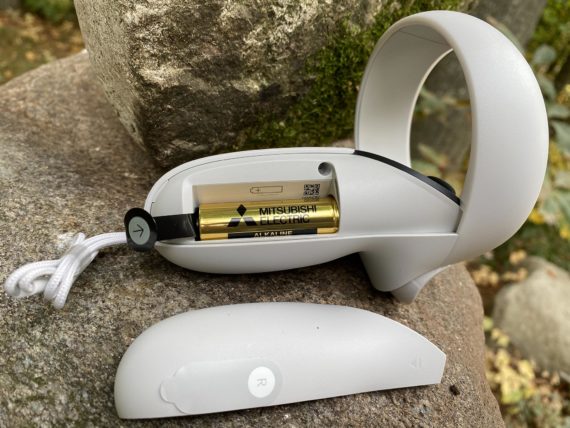 The headset itself is, and I can’t stress this enough, very white.  That’s perfectly OK for an easily-cleaned plastic housing but the stretchy fabric band feels like it wants to pick up dirt, which admittedly is more of a problem when doing photography around rocks than playing inside.  The headset feels light enough, and comparing the stats its 503 grams means it only weighs a bit more than the CV1 and is close enough to the Rift S to make no difference.  The plastic rim with the foam padding around the eyepiece pops off with a bit of a wiggling, and that smaller black rim goes between it and the Quest 2’s body to extend the internal area enough for people to wear their glasses inside.  As the small cardboard insert says, the lenses slide left and right to click into one of three positions for people whose eyes are closer together or farther apart, and the plastic housing around them extend far enough forward that there’s no need to get your fingers on the glass during the process.  Also, it’s a shame you’re not supposed to expose the Quest’s fresnel lenses to sunlight because the concentric rings look great in it. 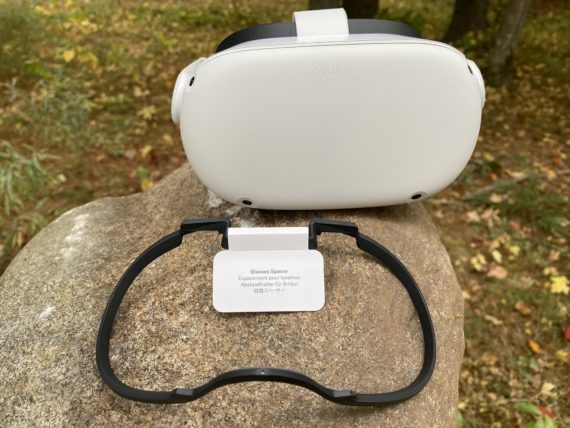 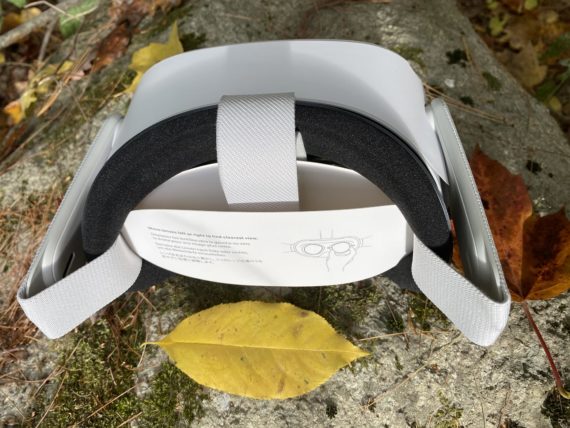 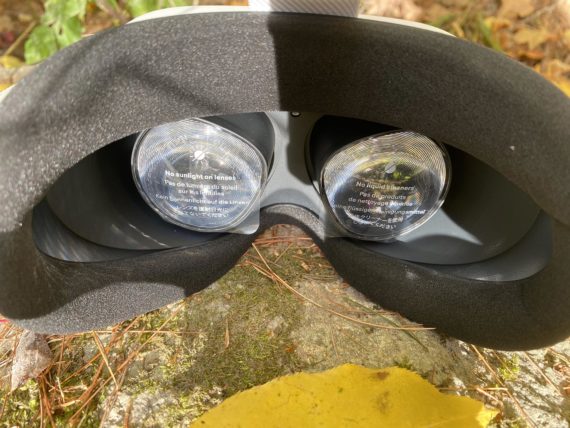 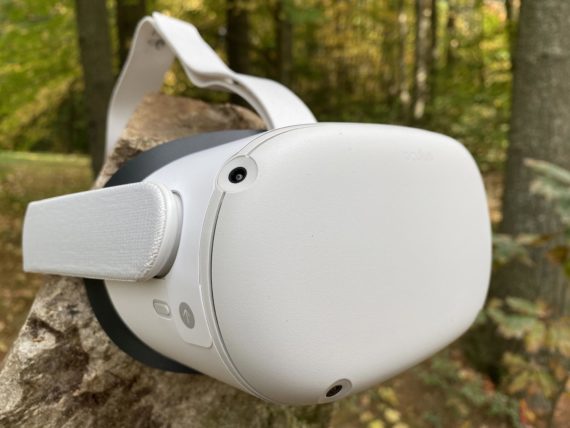 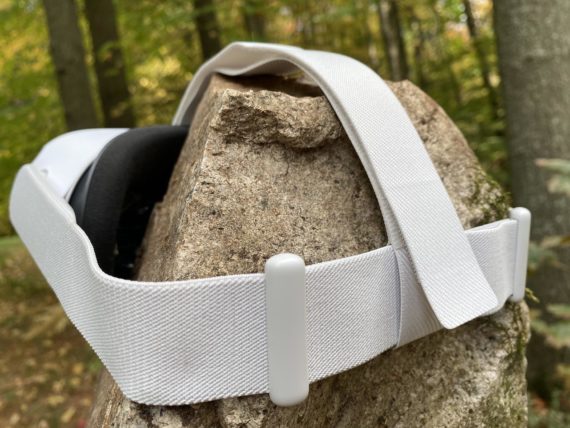 With the Quest 2 properly unboxed it was time to do the basic setup, which was relatively easy.  The Quest comes with a battery charge strong enough to get the process started and you can leave it charging while it takes a few minutes to download the first updates.  And then, finally, with setup out of the way it’s time to stop admiring the hardware and its packaging and get to playing some games.