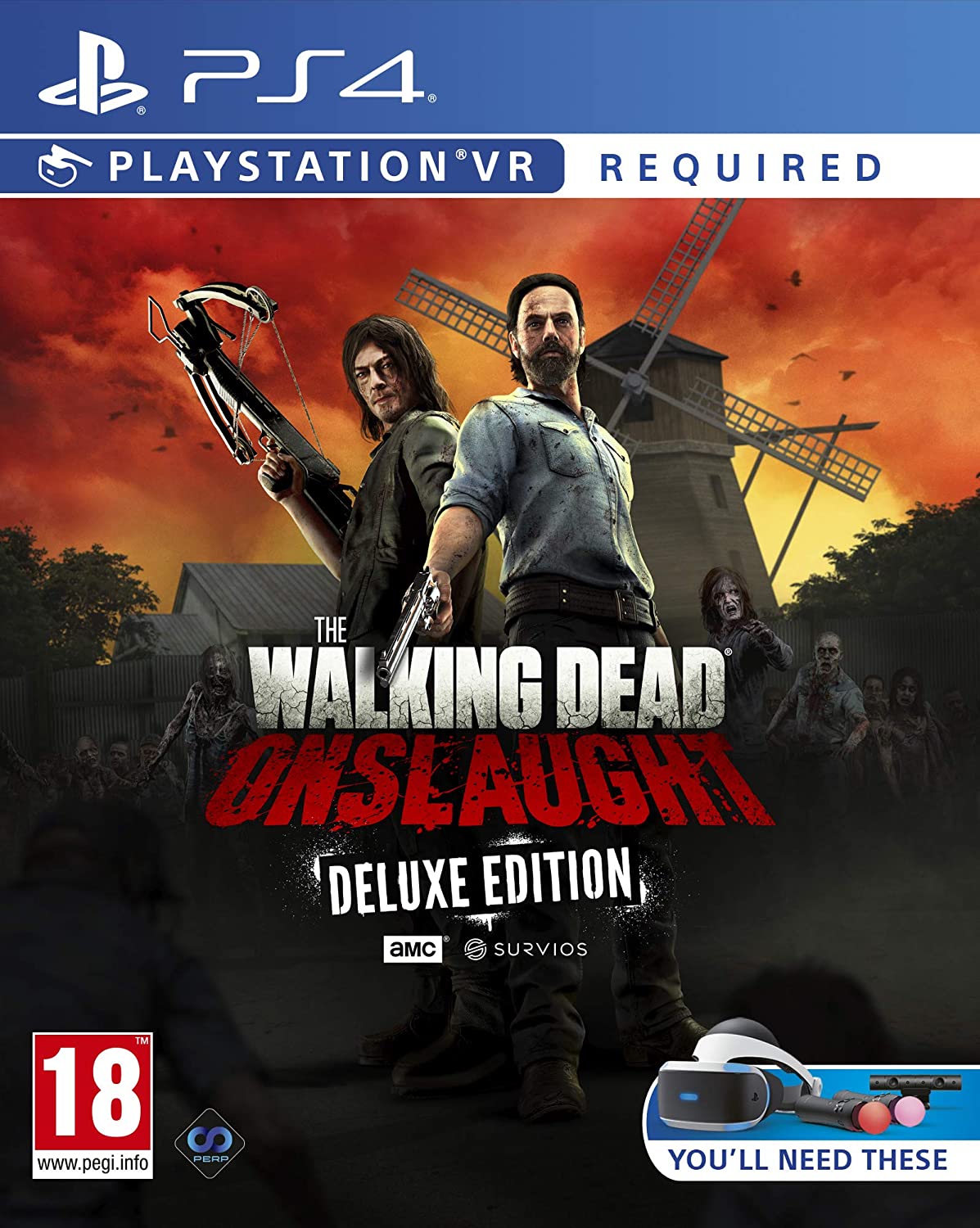 October is the perfect time for horror games and to experience them in an immersive VR experience is a whole other ballgame. Survios is bringing its game-changing technology to the world of The Walking Dead with The Walking Dead Onslaught. Yes, some people are suffering from The Walking Dead fatigue, and this comes on the heels of another recently released VR Walking Dead title, The Walking Dead: Saints & Sinners. On the surface, both titles are no doubt similar, but the premises are different entirely. Onslaught is developed by Survios (Creed: Rise to Glory, Battlewake) who have literally teamed with AMC for the story of the game as it’s based in the television universe where as Saints & Sinners was not.

The slow pacing and more focused Saints & Sinners did an excellent job of creating an atmosphere that kept you on edge, but Onslaught will be going the more direct route. Survios wants you attacking and gunning down walkers, but doesn’t want you completely turning into Rambo. Survios is touting this as “Fast-Action Survival,” as action during gameplay got tense and much like the description from the show, if you let yourself get outnumbered you’re in trouble.

The story in Onslaught actually takes place after the war with the Saviors as seen on the television show. You will need to rebuild Alexandria as Rick and Daryl have a disagreement over a mystery person. The campaign takes you through what leads up to this as you play as Daryl. Daryl somewhat narrates the story as you progress through the chapters as he fills Rick in on the jest of his actions between each one. You will scavenge on separate missions and play as either Rick, Michonne or Carol as you bring back supplies to the camp. These supplies can either be new weapons or items used to rebuild the camp. You will rescue survivors on the way that unlock new areas and progress the story. This all sounds great on paper, but in execution, these are short-sighted and underwhelming. 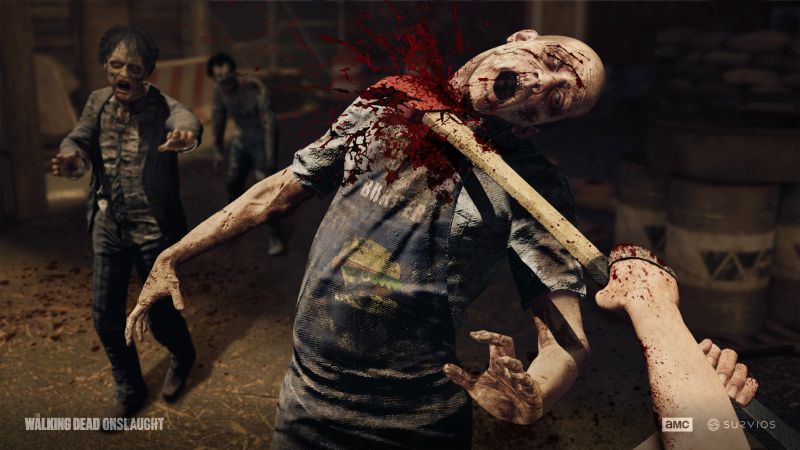 While the story’s writing seems good, it gets lost in the background. Levels and areas are linear with only some of the scavenge missions allowing you to go into separate buildings. This all has to be accomplished while avoiding a walker horde and not only all hell breaking loose, but losing health because you are in the horde zone. While you can play as any of the characters from the show, you’ll never actually see yourself as them and they don’t have any differentiating stats or variation to any of them. Rick Grimes has a prominent amount of dialogue and while AMC is on board, actor Andrew Lincoln was not, and the person they got to do Rick’s voice acting doesn’t fit the bill. Survios did get three of the actors to voice their characters in the game. Carol is voiced by Melissa McBride, but not often. Eugene is voiced by Josh McDermitt as he’s the navigator over the walkie talkie, but does get annoying and repetitive. The shining star is Norman Reedus, as his voice acting and dialogue are spot on. Michonne is not voiced by her television actor, so it is inconsistent in this regard. Having one of the main characters not voiced by the actors deters from the experience, but Daryl makes up for this.

Much like Saints & Sinners, Onslaught has weapon crafting and item scavenging. This is limited and simple, though, as it’s a straightforward process to upgrade Alexandria and its buildings. The scavenge missions can be replayed and are a good change of pace from the main story, but get repetitive. These need to be done just to rescue survivors to be able to progress the story. There’s no physical action of rescuing said survivors; you just need to complete the mission.

Mods can be added to weapons as Onslaught sports 24 realistic weapons with iconic ones included in the Digital Deluxe version. Various guns and melee weapons can be improved to make the combat better. Starting off, the pistol does little before needing to reload as does the rifle. You will learn over time when and where to take your shots because it will need to be from a distance. If you try to pop a walker up close, you’re going to get bit. This is frustrating until you adapt. Especially if you encounter a walker that has armor on or some other variant. Survios has been a company famous for its virtual reality tech. The Phantom system used in Creed: Rise to Glory was fantastic. Survios has introduced the Progressive Dismemberment system, and that name speaks for itself. Attacking different parts of walker bodies do different things and you can straight up remove body parts. It’s part of one of the great visual details of the game. Once you get the shooting down, blowing off the head of a walker is satisfying or even just blowing off two or three parts of it while taking and arm out while you’re at it. 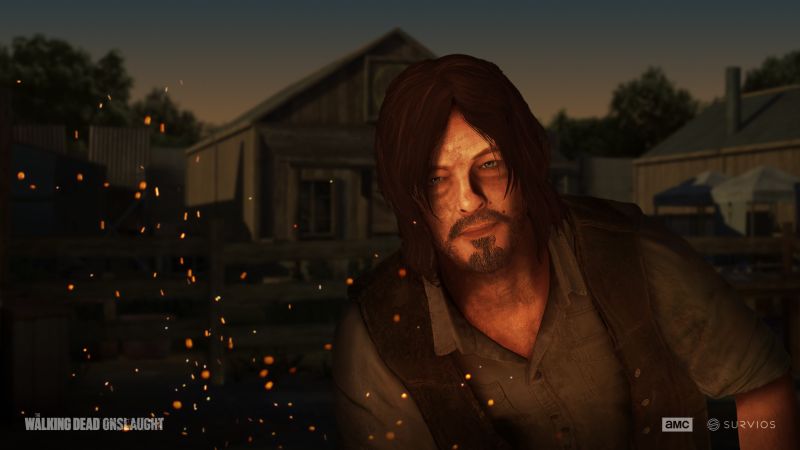 I reviewed Onslaught on PlayStation VR, and it’s clear that the tech within the games has moved far and beyond from the hardware tech that it’s on. The visuals are one thing, but playing with the PlayStation Move controllers proved to be difficult. Meleeing in this game is an inconsistent mess. Using the knife to stab a zombie in the head doesn’t work as simple as it should in most cases. The silhouette for your controller goes red and you just end up butting the walker in the head. You can grab walkers by neck and slow down the process, but it didn’t make a difference. Using a longer weapon like a pipe and waving it around is a big help, but the tracking can’t keep up with the speed you move your arms at. The game is designed to make sure you’re not comfortable because of the fast pace but not because of the tech.

It’s rewarding to pick your shots with a gun and aim down the sights. Even with this, the tracking can be awkward. A green indicator is given if you line up your sights with a headshot. You’ll manually need to reload your ammo clip each time you run out. This can get annoying if you’re down to a round or two as you can’t just reload the clip. Thankfully, you don’t need to load your clip each time. The rifle also makes you pump it after each shot. A lot of this is a good challenge without overkill, but there’s an adjustment period needed to learn to prepare yourself. The shooting is the best means and most enjoyable form of combat in the game. There isn’t an abundant amount of ammo, though, so you’ll need to manage this. 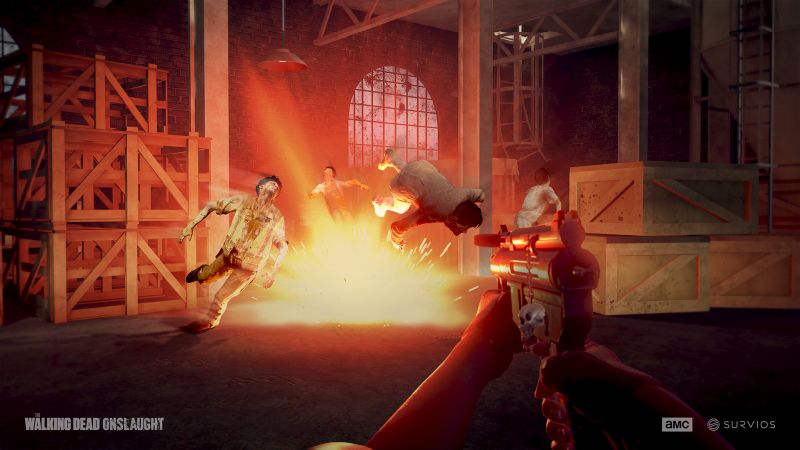 For a PSVR title running on a PS4 Pro, the visuals are good where they need to be. The face models of all the actors are accurate and the zombies look marvelous up close. The way the light reflects off the weapons makes them look realistic. The details that matter the most are fantastic. Even some of the object textures are solid enough, but the game suffers with objects in the distance. What is impressive is the amount of walkers that can be on screen at once. This is another title I hope to see visually benefit from the hardware of the PS5.

The actual horror element fits the Fast-Action Survival description. I love the background music while you’re at the camp as it’s unsettling and hostile. This title doesn’t go after you with atmosphere like Saints & Sinners did, but rather spur-of-the-moment panic and decision making. It isn’t as heavy on jump scares as you would think, but having a good headset to know the general direction of walkers is important. One thing that kills the immersion is running into objects. All objects are stagnant and cannot be moved, even if it’s a random chair in an open room. What’s worse is if you’re running and you bump into it, you immediately start walking. This makes the franticness peak even more. Walkers will also come up behind you if you aren’t careful and can fall off of roofs, so you will be on your toes at all times. 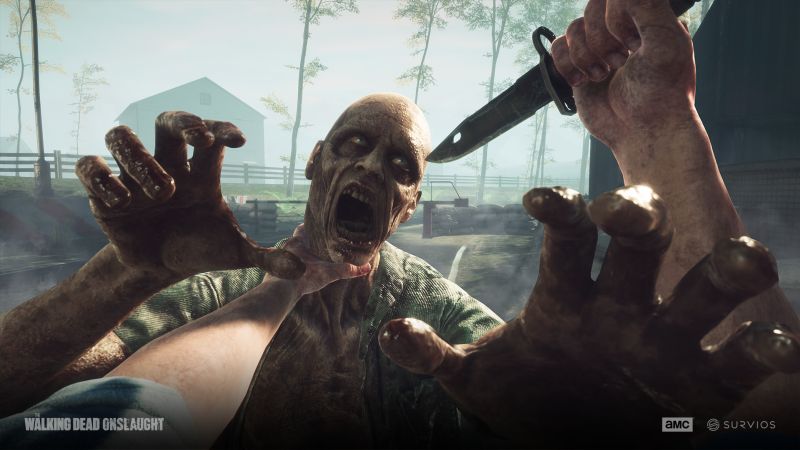 While it’s nice to have a game based on the television version of The Walking Dead that’s enjoyable, this aspect falls short in The Walking Dead Onslaught. While some of the voice acting and the face models are good, the rest feels tacked on. Being able to identify targets and pick your points using guns offer a fantastic feeling, but the motion detection on the PSVR has a lot of issues. These issues may be a bigger deal if this was a full-priced game, but it’s only $30 and completely worth it for that price. I feel this would be a better experience on other platforms, but the game is playable and still enjoyable on PSVR. While I prefer a horror title that creates an atmosphere, the frantic tone of Onslaught does a good job in creating something different.