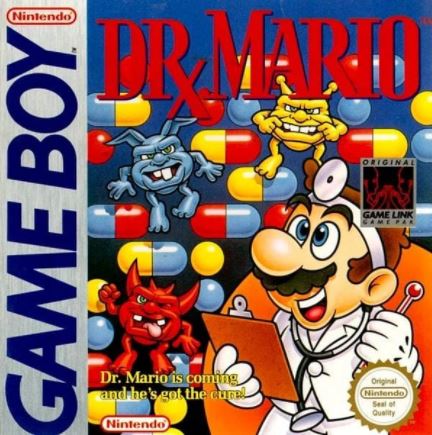 By now everyone is sick to death of hearing about COVID and we’re probably sick of the lack of concerts, sporting events, museums and other such excuses to step away from our video games and leave the house. And as a bearded individual I am especially sick of face masks. There is talk of vaccines being made and a number of ridiculous conspiracy theories, with a few people even combining incompatible conspiracy theories into truly ludicrous conspiracy theories. We’re all sick of it, and wish that we had a super doctor that can just throw some pills at the virus and make it die, like they used to do in the old days when Dr. Mario was still practicing physician before he lost his license in the Goombagate scandal. Apparently his record of genocidal tendencies towards goombas questioned his ethics and compassion and whether he was fit for practicing medicine, but before such things happened he was considered one of the greats.

Dr. Mario not being a practicing physician is probably a good thing. He is a reputable plumber, and while that profession serves a vital purpose and has a specialized skillset, it doesn’t necessarily translate over to the field of medicine. He had an unorthodox approach to medicine which was basically taking a bunch of pills and throwing them at random into a giant bottle filled up with different viruses. We could speculate that the game isn’t actually treating an infected person and this could be part of the research process of medicine but this is purely speculative. Either way, even if Goombagate wasn’t a thing (editor’s note: it really isn’t a thing) this haphazard approach to medical research or treatment is grounds for Mario to be stripped of license while being lectured.

While Dr. Mario’s approach to treatment is questionable at best, it does lead to an entertaining game which is really the only expectation anyone should have of Mario. Dr. Mario was released for Game Boy about a year after the handheld’s North American debut. Dr. Mario was concurrently released on the NES, but porting it to Game Boy seemed like a smart smooth since puzzle games were gaining popularity thanks to Tetris being the included game with Game Boy, back when it was standard for consoles to include a game with purchase. 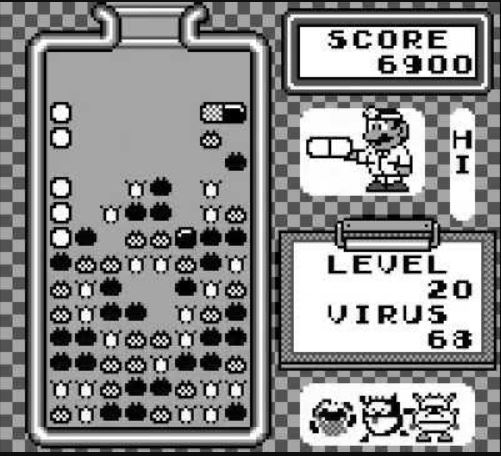 Dr. Mario is very much in the same vein as games like Tetris and Columns. Dr. Mario doesn’t necessarily surpass either of those games but does offer a similar experience and the fact that Mario is included does help give the game a certain appeal to Nintendo fans. The gameplay is straight forward for this type of puzzle game. There are three different colored viruses in Mario’s jar and he throws two-segmented pills composed of some combination of the two colors. Match the colored pills to the right viruses and they die, which would be nice is medicine was that simple in real life. As the player advances the levels stay the same except more and more viruses appear on screen, making things more difficult. The player can adjust the speed for additional challenge in the options menu and there are two choices for music.

Video games are no stranger to controversy and some of the more famous examples of outraging the Tipper Gores of the world include Mortal Kombat and Night Trap. While those games being the cause of parental outrage actually made sense, Dr. Mario also incurred parental backlash due to the inclusion of medicine. This is a little puzzling, since this was back before the anti-vaccine movement was a thing. Maybe they were afraid kids would confuse prescription medicine for snacks. To me playing as a doctor and killing viruses seems like a reason to encourage kids not to fear the doctor, but elements of pop culture causing hysterical reactions in parents is something we just need to accept as an inevitable part of our culture. 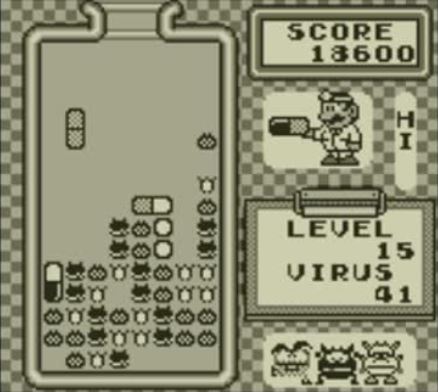 Dr. Mario may not be the top choice for treating any real life ailments, but having him throw different colored pills in a bottle of viruses isn’t a bad way to pass the time. The gameplay feels more repetitive than some of the similar falling block puzzle games and doesn’t dethrone Tetris as the king of this of game but does offer a fun alternative. Throwing pills at viruses might not be an effective way to treat them but Dr. Mario does work as a prescription to treat boredom.