The Monster Hunter series has long been one that was popular in Japan but managed its largest numbers in its portable iterations. While the series was at one point extremely niche in the west, Monster Hunter World helped the series far exceed expectations and become Capcom’s best-selling title to date. Its only flaw when it came to hardware was not targeting the handheld audience who liked to play on the go. Now that’s all changing with Monster Hunter Rise which is aiming to release exclusively on Switch and bring a brand new title to the system. The previous entry, Monster Hunter Generations Ultimate, was just a 3DS port but now we have a title that’s taking full advantage of the hardware. The best part is that it’s looking like the perfect evolutionary upgrade from Monster Hunter World.

While story has never been the largest draw of Monster Hunter, the setting we’ve seen so far is charming. The main hub is known as Kamura Village and has an extremely strong Japanese influence to the overall design. This also extends to the many new monsters, which are based on a variety of yokai from Japanese lore and stories. Rise has an interesting parallel to the Japanese-exclusive Monster Hunter Portable 3rd which also heavily influenced in Japanese architecture and ancient history mixed with the usual mix of fantasy. One interesting touch, perhaps entirely intentional, between both of them is that one of the starting monsters in Portable 3rd known as Arzuros first appeared there and is returning after an absence in World. 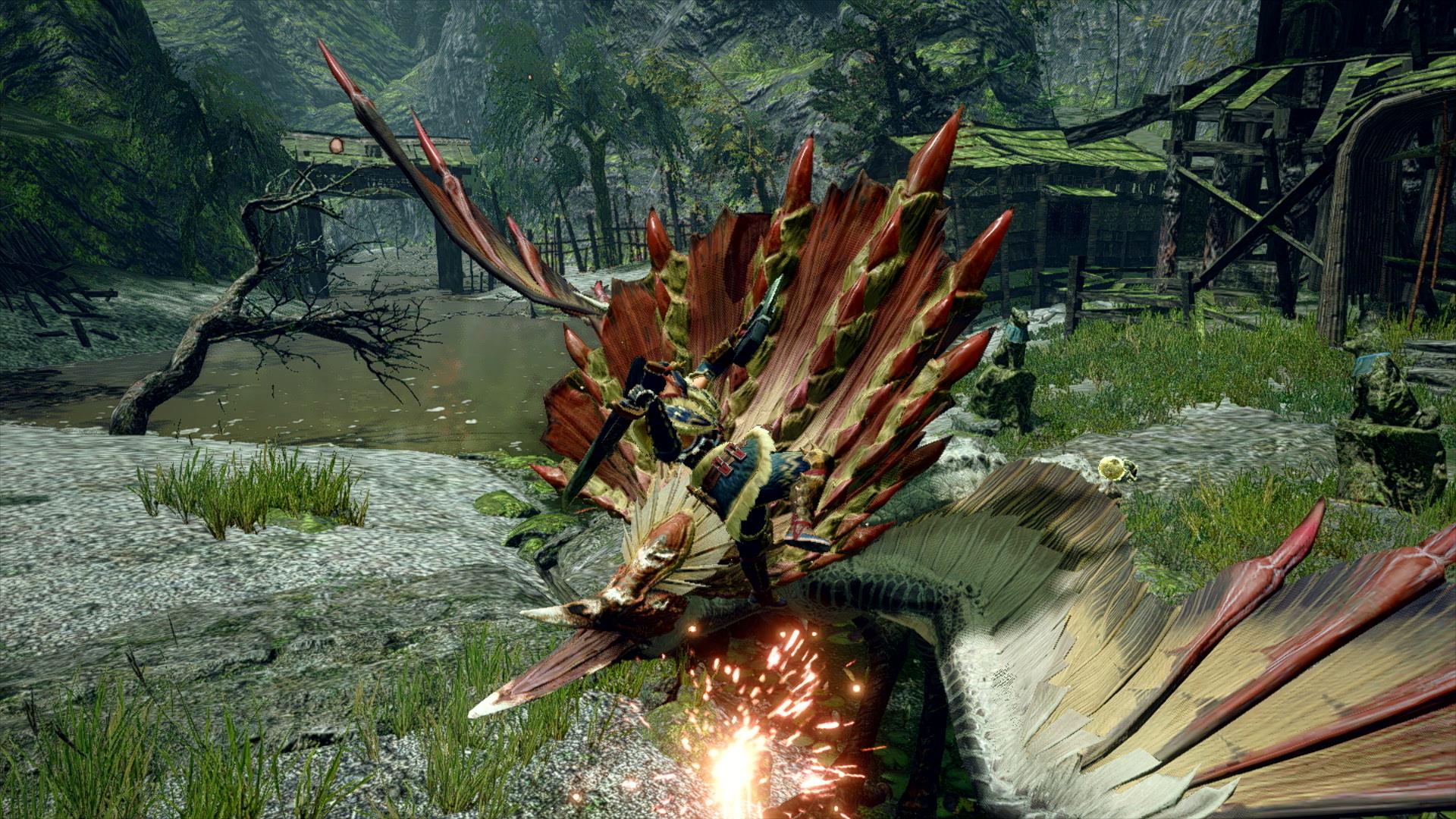 Monster Hunter Rise looks to be mainly basing a lot off of World. This includes a lot of the weapon attacks we’ve seen, the large areas to fight in and even the full voice acting with heavy story emphasis. The big thing is how some of these have changed despite being so similar. The open areas make the zones feel fluid like World, but without the need of scout flies to navigate and removing a lot of the overly-detailed foliage to create more open spaces. Weapons at their core all seem to have similar combos carried from World, but with the removal of the Clutch Claw and inclusion of the new Wire Bug that acts as a way to pull off new kinds of attacks. Not much can really be said of the story just yet, but fortunately with Monster Hunter every story can essentially be summarized to go kill the next monster cause it’s up to no good.

Of the brand new inclusions to Rise there’s first and foremost the Wire Bug, which is where a lot of inspiration for the Rise subtitle comes from. Wire Bugs are a friendly creature that associate with hunters in order to help them both in and outside of combat. In combat these helpful creatures can be used to trip up monsters for special attacks or dodge out of the way if timed right. Outside of combat they’re great tools for reaching new heights and exploring seemingly out of reach areas. All hunters start with two of these per quest and once used will be restored over time to be used again. Hunters are able to send out wire bugs in order to swing, climb or even fling themselves in multiple directions. Temporary wire bugs can also be found during exploration in order to expand what hunters can do and further encourage exploration to find them. 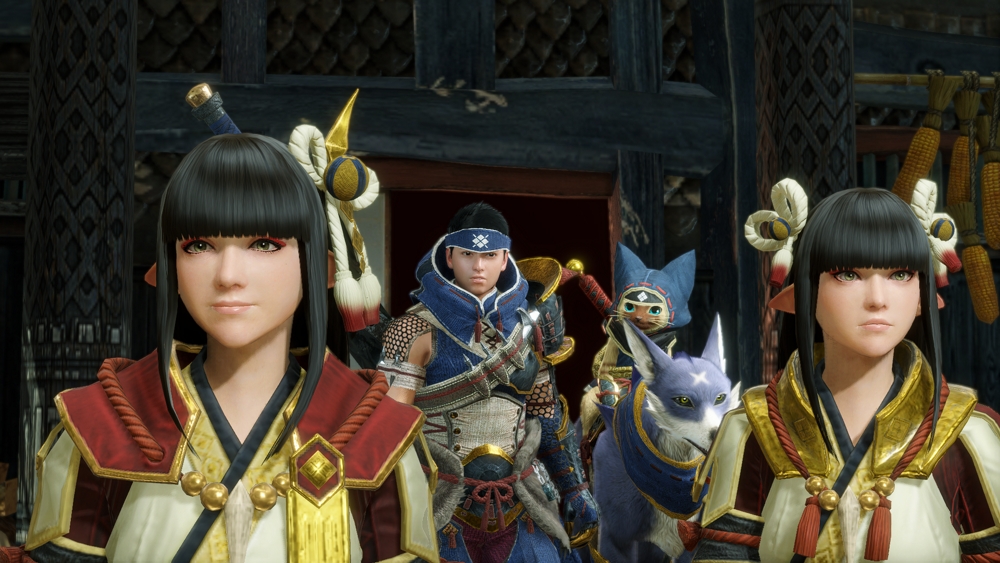 Felynes have been a huge part of Monster Hunter since the very beginning and later went on to evolve into the Palico companions that everyone knows and loves. The beginning of the reveal trailer for Rise unveiled an entirely new companion known as Canynes who work as Palamutes for their hunters. These dog helpers create a brand new dynamic that was originally filled almost entirely by the Palicos by being not only an attacker in combat, but also a mount players can ride to traverse areas faster. In solo play, hunters can take two of either Palico or Palamute on their hunters with the former taking a somewhat supportive role and the latter being more aggressive attackers. Riding Palamutes allows them to traverse most terrain aside from rough mountain sides unless covered in vines for them to grip. Like previous titles these companions never die in combat, but once their health as been drained will retreat to heal up before returning. When going online, each hunter can now take one or the other companion with them in order to aid in battle which is a huge change from previous entries where Palico could only come with if there were two or less players. Palamutes also have their own action bar to do a variety of different things such as give them commands, hop on their back to ride or do some cute actions such as petting and feeding them.

Before World tracking down monsters meant first finding them and then throwing a paint ball at them in order to always see where they were on the map. In World, they added scoutflies which upon picking up monster tracks would guide hunters to the monster they were looking for. Rise does away with both of these to create a method which seems definitively better. At the start of a question, hunters send out an owl who off-screen finds all the monsters in the area and marks them on the map which can easily be viewed to the side of the screen. Although it doesn’t explicitly say which monster is which, they’re all readily viewed and can be tracked that way. Once they’re found in the area and engaged they’re marked on the map and can be easily followed from then on. While the previous two methods worked just fine, this is a gigantic change that will help make getting to monsters faster and improve the pacing that was somewhat slowed down by the need to track monsters before. While the monsters on the map also aren’t immediately obvious as multiple can appear at once like past games, learning more about the monsters can even help pinpoint which one is likely to be the one they’re after such as water-based monsters starting in the river. 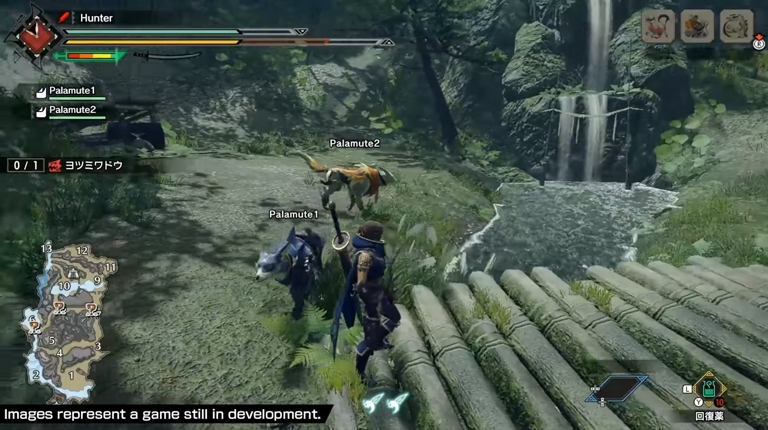 Another brand new addition to Rise is a unique but entirely optional collectible of sorts when starting a quest. We know that eating is returning from past games which gives hunters buffs for each quest such as health and stamina. What’s interesting about Rise is that there are additional ways to increase stats for that quest for those who don’t mind doing a little searching or perhaps find on the way to the monster. There are new bird-like creatures that are part of the endemic life that carry with them different colored orbs. These four colors seen in footage offer buffs that they rub onto the hunter if they pass by which allows it to last for the duration of the hunt. Right now it’s unknown if this will stack upon previous entries max health and stamina, but it will be a nice bonus for those who want some extra attack or defense before facing monsters. Many of these birds are hidden up in the mountains that can be climbed which makes for good incentive to go over mountains instead of just around during a hunt. They’re not necessary at all but it will be interesting particularly in regards to defense and attack just how much they can help.

While Monster Hunter is not a title that ever truly required impressive visuals to be a spectacularly fun series, World brought a lot of shiny change to the overall appearance. Rise, being on Switch, obviously doesn’t reach the same level but just from footage seen it’s surprisingly impressive on the hardware. Ultimately what will matter most is keeping a consistent frame rate, which shown off gameplay seemed to be doing well while aiming for a steady 30fps, but it’s an utterly stunning change when compared to the other mainline Monster Hunter title on Switch. We’ve only seen one main area so far although one was teased with the reveal of a yet unnamed monster. There were also some great glimpses at the main new monsters we’ve seen so far, including seeing most of them in combat aside from the flagship Magnamalo. There’s a small list of confirmed monsters who are returning such as Arzuros, Tobi-Kadachi and of course the Rathalos and Rathian duo. All the monster icons also underwent a gorgeous artistic change as they’re wonderfully stylized based on old traditional Japanese art to fit the overall theme. 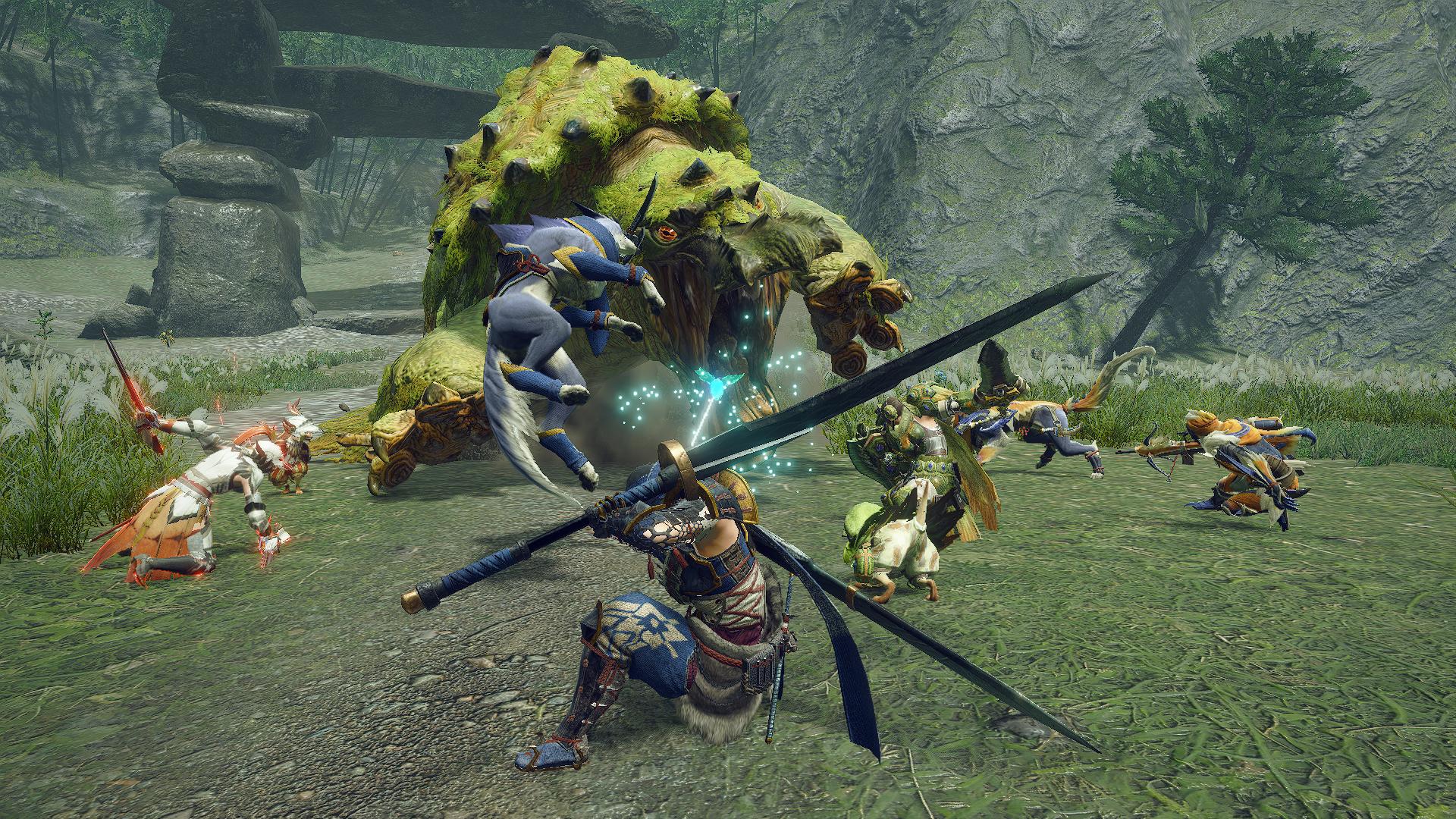 We’re a little under six months away to Monster Hunter Rise releasing on Switch and from what we’ve seen so far it appears to be a genuinely impressive successor to Monster Hunter World. It appears like it’s taking all the best elements and tweaking them based on fan feedback to make for what could be the next best entry in the series. There was a surprising amount of new details revealed that have been interesting to find out, but still a lot of questions that will hopefully be answered with regular updates. There are so many great quality of life changes we’ve seen already; it will be exciting to see every other new piece of information as we continue to learn more throughout the months before it releases on March 26 next year.