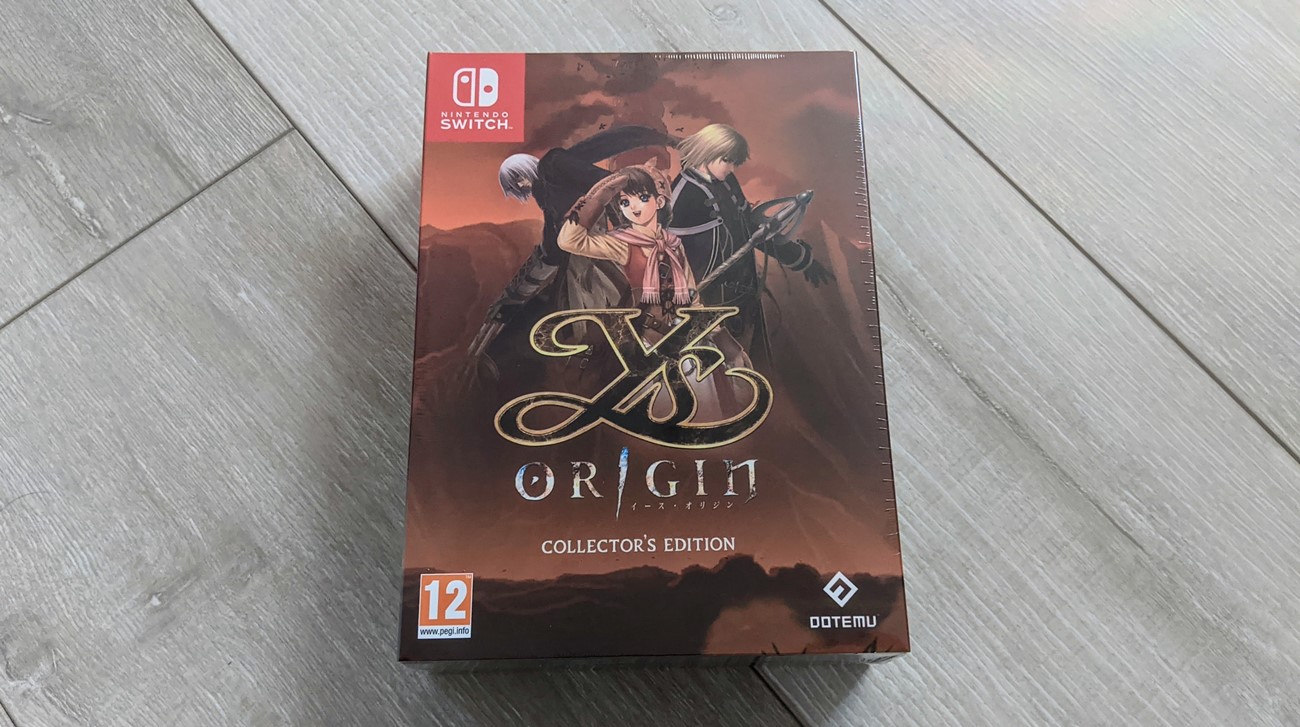 Ys is a beloved series that continues to draw in new fans every year. Even though it’s not as big as more famous RPGs like Final Fantasy, we’ve been seeing more special editions for Ys releases. One of the most recent is the Ys Origin Collector’s Edition available via Strictly Limited Games thanks to DotEmu and Clear River Games. Strictly Limited Games are akin to Limited Run Games, though their focus is on producing physical releases for the European market instead of the US. With that said, they do ship worldwide. The Ys Origin Collector’s Edition is available for both PS4 and Switch, but both include the same contents. The screenshots in this article are for the Switch edition. 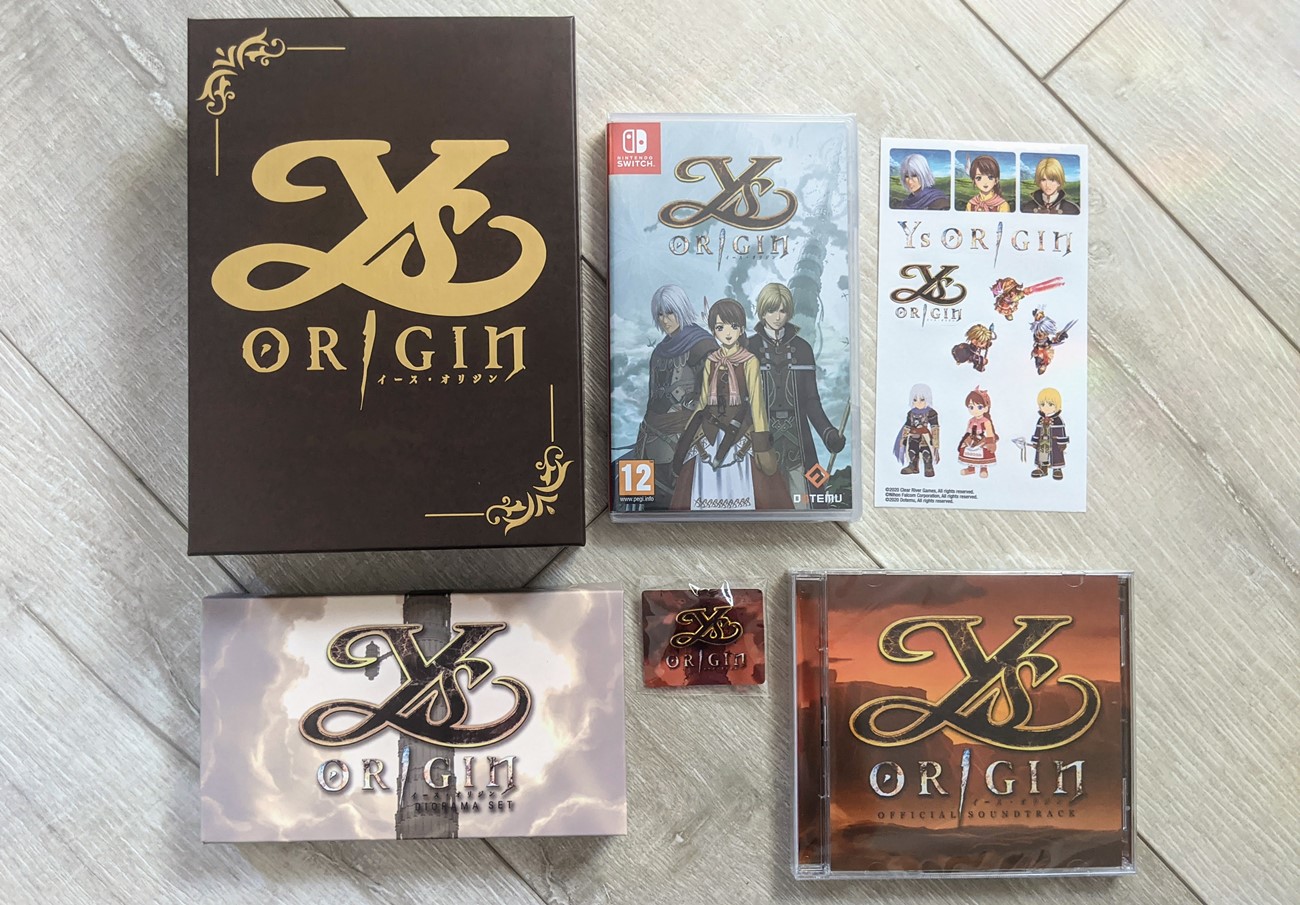 The Ys Origin Collector’s Edition comes housed in a sturdy cardboard box. It’s initially covered by a cardboard sleeve showcasing Ys artwork and a description on the back. Once slid off, the box reveals its lovely gold foil treatment on the “Ys Origin” logo. It’s a handsome box which keeps the contents safely housed within. What all is included? There’s a copy of the game, featuring reversible cover art, alongside a two disc soundtrack, acrylic diorama, sticker sheet, enamel pin and bonus acrylic card. This is a good mix of goodies which is both expected and unique. Not enough companies produce limited pins to go with their games. 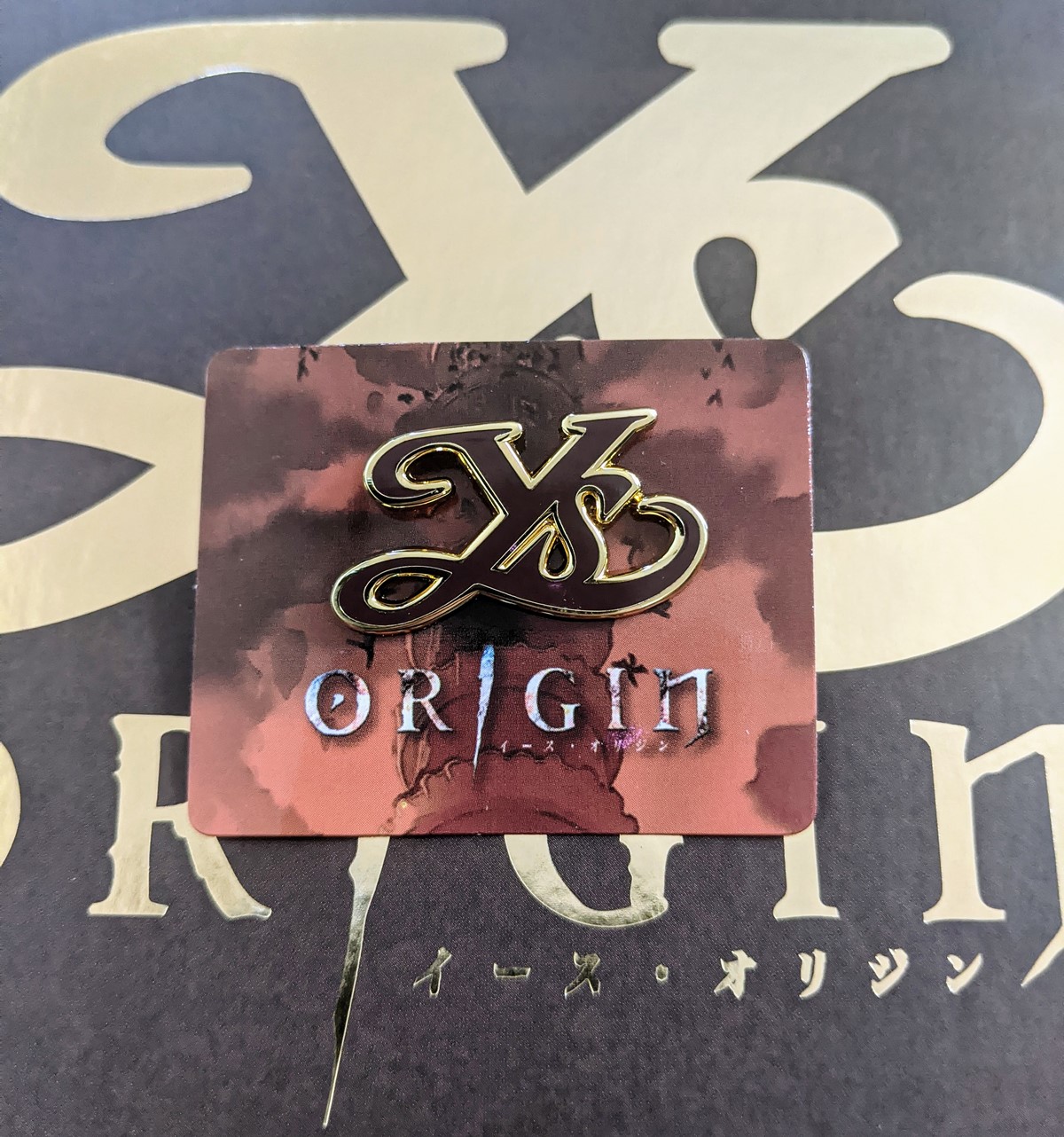 First let’s take a look at that pin. The enamel pin features the Ys logo design. It is about one inch wide and half an inch tall. The mature deep burgundy color and golden outline make it look respectable. It’s a great collector’s piece all in all. Next up is the sticker sheet. These aren’t commonly included in special editions, but when they are it’s a lot of fun. There are eleven different stickers on the sheet. A couple are of the Ys Origin logo. The rest feature the three main characters in varying art designs. The character images in particular would look great on a laptop or on anything else you’d like to decorate with stickers. Note that these are your traditional stickers rather than fancier vinyl or waterproof ones. 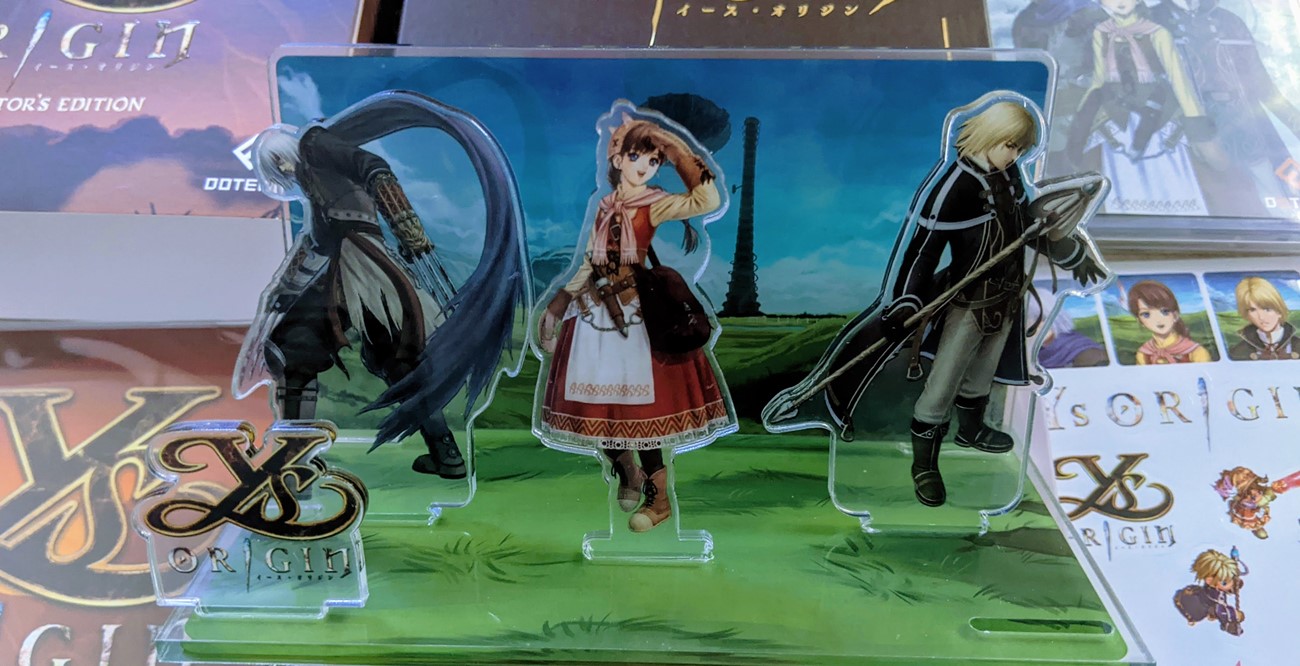 Also included is the Ys Origin diorama set. Dioramas are becoming increasingly popular pack-ins for collectors editions outside of Japan. For the uninitiated, they are basically flat pieces of acrylic featuring artwork on them. The art is the same on both sides. In the case of this collection, there’s an acrylic base with slots cut into it and which sits flat. There’s a background piece which slots into the bottom piece to hold itself up. Finally, there are enough slots to place the three character acrylic figures onto the base. It’s a simple and fun way to decorate your space with Ys Origins merch. Make sure to slot everything into the base completely as they may otherwise tip over and fall off.

Finally there’s the two disc Ys Origin original soundtrack CD set. The jewel case comes sealed. This two disc set does not seem to contain every single track in the game, but that’s rarely the case with soundtrack releases. No FLAC or MP3 download is included. Those who still have CD drives in their PC, however, can easily create music files themselves with the discs. Music in the Ys series is iconic and the same remains true of Ys Origin. It makes total sense why a soundtrack CD was included here.

Anyone interested in picking up the Ys Origin Collector’s Edition can still do so via Strictly Limited Games. Both the PS4 and Switch version are still available, though they are limited in number. There are only 1,500 produced for PS4 and 3,000 for Switch. Consoles like the Switch and PS4 aren’t specifically region locked, but it’s still worth checking that a specific game supports all regions. Both copies of the Collector’s Edition are being sold for €44.99, which is approximately $53. As stated before, Strictly Limited Games ships games worldwide. Be sure to check them out if you’d like the Ys Origin Collector’s Edition on your shelf.