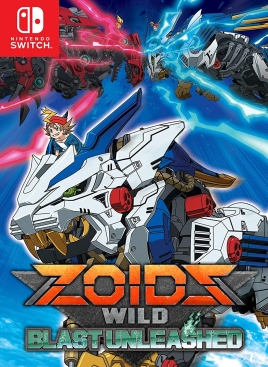 The mecha genre of pop culture is one that boasts a buffet of many flavors. There’s the crunchy tech side that can be found in Battletech and there’s also the romantic side of mecha featuring political intrigue found in Gundam. Somewhere between those two lies Zoids — mechanized animal weapons. They live among people in a post-modern society. These animals are like ones we would normally see in the wild; they are conscious creatures that allow humans to pilot them. ZOIDS have been a niche mecha title with a cult following since the 1980s. Despite being such a huge fan for the longest time, I also recently learned they they originated from a toy-line before there was any source material. Once the shows picked up, games and more found their way to mainstream audiences. Games varied from tactical titles to arcade fighters. One in particular, Zoids: Battle Legends, featured arena style play that we’ve come to see from similar titles like Gundam Vs. It’s been about 2005 since we’ve seen a Zoids game, but now the franchise is back on Nintendo Switch. Coinciding with the most current Zoids series, Zoids Wild, Blast Unleashed picks up where some of the great previous titles left off with arcade-style arena battles and tons of content for players to enjoy. While the title doesn’t boast a strong narrative component, it has surprisingly-nuanced fighting mechanics. Featuring major Zoids from the Wild series in an excellent arcade package, Zoids Wild: Blast Unleashed is worthy of fans’ time.

Zoids Wild: Blast Unleashed closely follows the series Zoids Wild. Players are treated to beautiful aesthetics that are miles improved from the early 2000s. Graphical quality is improved when the Switch is docked in TV mode and 720p quality in handheld. Regardless, the title plays smoothly in both forms and offers players detailed tutorials for understanding the basics. Each Zoid available for play features its own unique gameplay and techniques. The title beautifully recreates each Zoid from the Wild series in look and feel. Picking the Liger Zoid means quick balance that you can feel in gameplay. This plays completely different from Tanks the Tortoise Zoid who is slower in speed, but has tougher defenses to break. Each Zoid is balanced in its unique way, it just comes down to the pilot’s skills. You’re able to chain different attacks together for maximum efficiency. Once enough of a Beast Bond gauge is built up through combat, you’re able to Power Up for stronger attacks. The attention to detail in these play styles are what help to make the title a robust fighter. 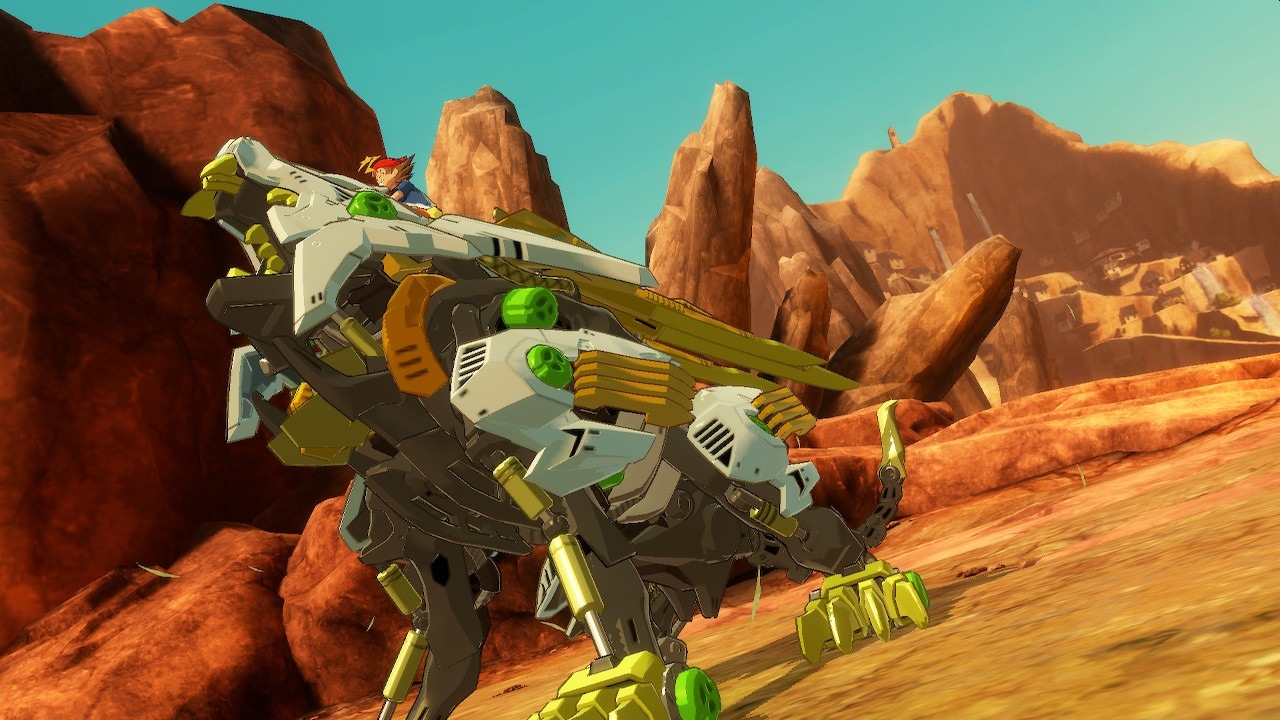 Blast Unleashed makes use of well-regarded techniques in its fighting play that are easy to pick up with some practice. Dodging, guard breaks, transformations and ultimate attacks all have their place in Blast Unleashed. The tutorials ask players to practice and carry those skills across battles. Once comfortable learning the basics, you’re able to test our skills in a few different battle modes: story mode, battle rush and PVP. Story mode is made up of scenarios from the show and branches into a huge tree of battles — as scenarios progress, battles become harder to challenge our progression. Working through the story tree unlocks new Zoids for battle, collectibles and even secrets. Yes, this is one of those good old-fashioned fighting titles that unlocks goodies with progression. There’s actually a ton of fighting content packed into the title that gives players a lot to dive into.

Where Zoids Wild: Blast Unleashed falters is in its narrative component. To be frank: there really isn’t one. When battling through the story tree, you’re treated to visual novel scenes that give recaps of key moments in the show. This could have been a great opportunity for visually-stunning cutscenes that honor the Zoids franchise. Instead you’re treated to skipping quickly through dialogue that is setup for the fight itself. It goes to show that Blast Unleashed is more focused on gameplay design than narrative experiences. Regardless, if you’ve been out of the Zoids loop for some time, it does give a brief summary of the newer series. Hardcore fans looking for additional source material will have to look elsewhere — this is a true arcade fighter. 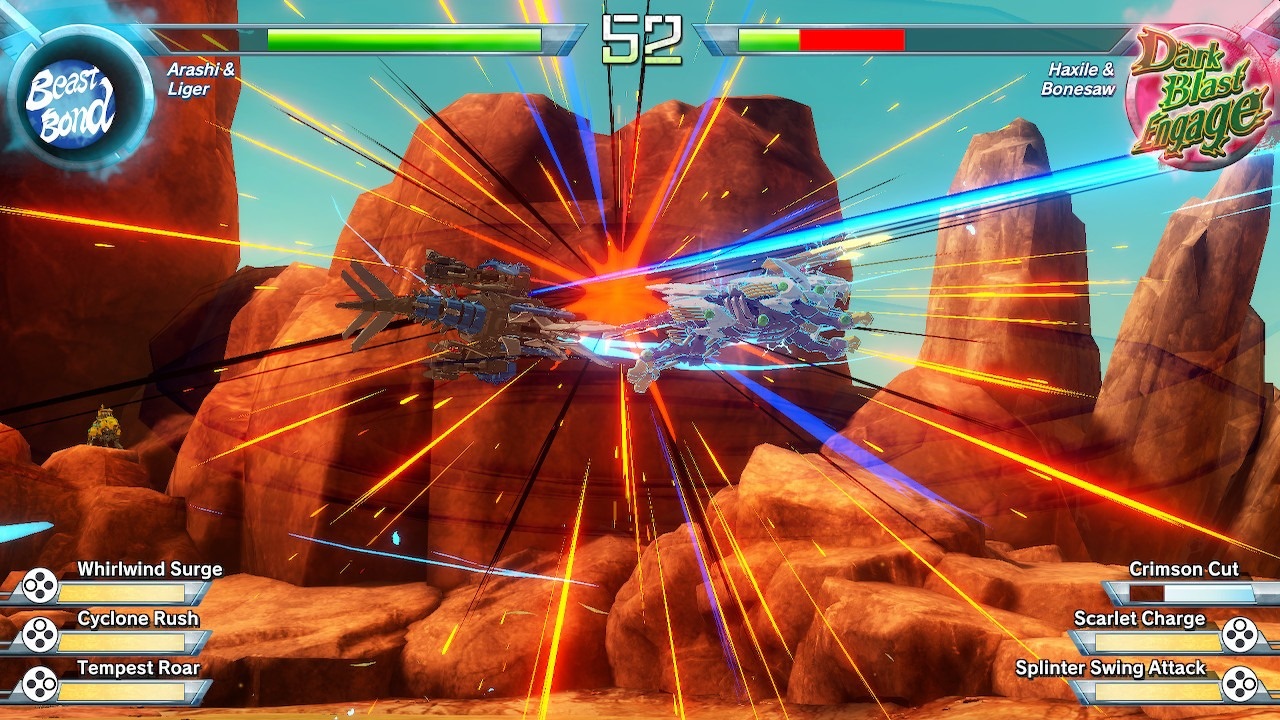 Zoids Wild: Blast Unleashed is the Zoids game fans have been waiting for. Gorgeously-animated character models and playstyles give each Zoid their own unique feel. It may not seem like it on the surface, but Blast Unleashed is robust in its fighting techniques and allows for accessible gameplay. It’s easy to pick up, but difficult to master. Players will have plenty of time to hone their skills as they battle through the various combat modes available. Story mode touches on moments from the show while unlocking major key components of the title like new Zoids to play with and collectible items. There’s almost no narrative to carry the title forward and instead was created as a true arcade fighter with climbing battles. Zoids Wild: Blast Unleashed has come to do one thing: fight. Battle techniques built into gameplay have come a long way since the last arcade Zoids title, but Blast Unleashed manages to bring a strong, technical fighting emphasis to a long-running franchise.