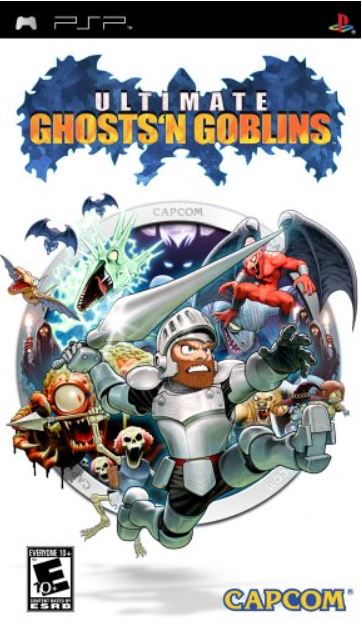 Whether it was called Ghosts ‘n Goblins or Ghouls ‘n Ghosts, Arthur’s lance-throwing adventures to rescue the princess from demon king Astaroth have been sucking up quarters and endangering controllers across every incarnation. Back before Dark Souls was the go-to game for being the measuring stick of difficult games, Ghosts ‘n Goblins was a strong contender for that honor. As if the brutally difficult games weren’t challenging enough with the platforming and aggressive enemies, the sadistic game developers made it a series staple to be rewarded by completing the penultimate level by sending the player back to the start of the game to get the weapon necessary to defeat the final boss, which was not even accessible in the first playthrough. Sometime around 2006 a development team at Capcom decided it would be fun to make a game that could increase the mortality rate of PSPs and thus Ultimate Ghosts ‘n Goblins was born.

Ultimate Ghosts ‘n Goblins is mix of retreading the same ground as previous entries in the franchise but also brings about some changes. The classic 2D action platforming remains but this is the first time the series has employed 3D graphics. The plot maintains the general theme, the princess is once again kidnapped and brave knight Sir Arthur must come to her rescue. She has been kidnapped by Hades, and Arthur needs to venture into the demon realm to rescue her, fighting off hordes of horrific enemies and massive boss monsters with hyperactive pituitary glands. 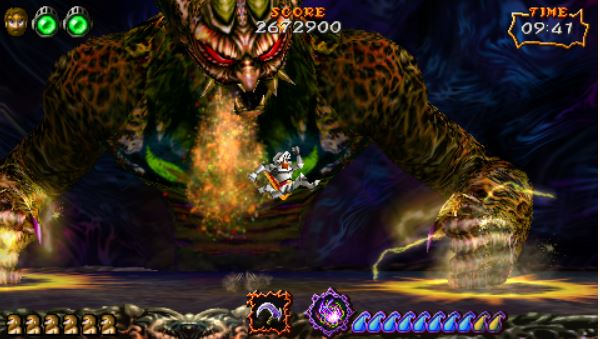 Ghosts ‘n Goblins/Ghouls ‘n Ghosts have been known for their unforgiving difficulty and Ultimate Ghosts ‘n Goblins maintains this, to a certain degree at least. There are three different game modes for Ultimate Ghosts ‘n Goblins: Novice, Standard and Ultimate. Ultimate is naturally the hardest, and the most faithful G and G experience. In Ultimate mode Arthur can only withstand two hits, the first hit destroying his armor and leaving him in his skivvies, which I have always wondered how uncomfortable it must be to wear just full plate underwear and a pair of boxer shorts. That has got to chafe something fierce. Anyway, back to the difficulty, in this mode when Arthur dies he will begin at the start of the stage or at the midway point if he has progressed far enough, so Ultimate mode is the traditional way to play. Standard mode has Arthur resurrected on the spot when he dies and his armor is better made since it can withstand more than one hit. Novice mode is made for people who want something easier than Standard mode, where in addition to the easier components of standard mode Arthur is given the POW powerup upon respawning and certain environmental hazards have been removed.

In the past entries a way to extend the game and challenge was to have Arthur heroically make it to the last level and then have to start back in stage one to collect a certain weapon that is necessary to beat the final boss and is not available during the first playthrough. This is not the case with Ultimate Ghosts ‘n Goblins but there is something similar. Progression through Ultimate Ghosts ‘n Goblins is not as linear as previous entries. In order to fight the final boss and complete the game, players need to find golden rings hidden throughout the levels. In order to do this Arthur needs to return to levels and access areas that were previously inaccessible after obtaining new power ups such as double jump. 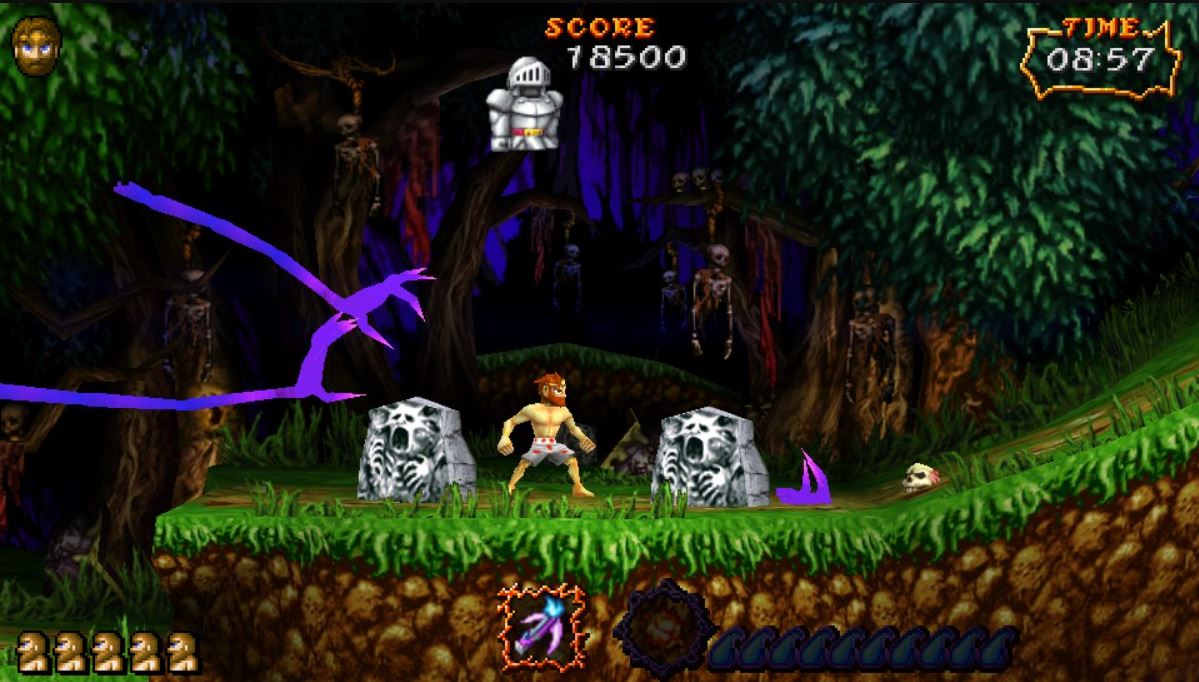 Another departure from past entries is that there’s now an inventory system. Arthur can collect and equip different weapons, which is a feature that also allows him to use a primary and secondary attack. Arthur can also collect different types of armor that give him different abilities, which is similar to how different armors in the past could power up his weapons and give him magic spells. The difference is now the type of magic attack Arthur has is no longer determined by just the weapon and armor combination. Arthur’s armor increases the power of the spell he has equipped and POW powerups can increase his overall attack power.

For the most part Ultimate Ghosts ‘n Goblins plays like the classic games in the series. Even on easier modes the game isn’t exactly easy, but the different modes makes the game more accessible to people. Standard modes for people who didn’t cut their teeth on difficult 8-bit action platformers and Ultimate for people who want the old school challenge. The collection of items and power ups keeps the tradition of making players return to previously completed levels but it does so in a less frustrating and annoying way than previous entries have. Having to find new items in previously inaccessible areas feels a lot less like a chore than just having to slog through the level again, even though it does also feel like it’s a way to artificially extend the game. Longtime fans of Arthur’s adventures will appreciate how this title maintains the classic gameplay elements and the varied level design. The obligatory haunted graveyard stage gives the needed nostalgia fix, and the other levels that include toxic swamps and volcanoes perfectly fit the game. The levels are filled with relentless demons and tricky platforming, and the reward for surviving these dangerous environments is facing off against an epic boss fight, some of which take up the entire screen. 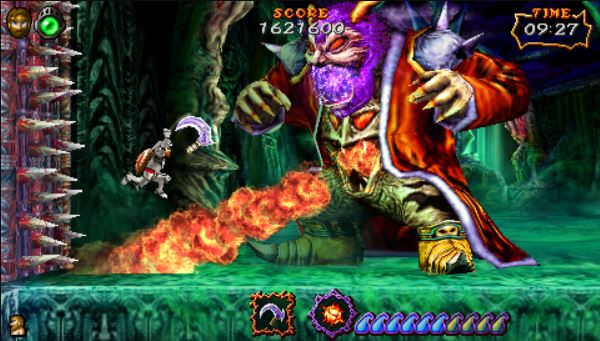 Ultimate Ghosts ‘n Goblins was a welcome return to the classic franchise back in 2006 after a 15 year absence. The changes that came to this title helped make the game more accessible to new players and feel more contemporary alongside modern games but maintained enough of the essence of Ghosts ‘n Goblins to appeal to longtime fans. It was a release that seemed to come out of nowhere, but being a fan of the series it was an impulse buy when I saw it on a shelf not long after acquiring a PSP and it was an impulse buy where there was no buyer’s remorse. The Sony handhelds were generally treated like second tier in the handheld market, and games like this are a reminder that there have been great Sony handheld exclusives.