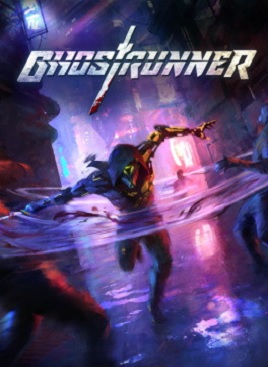 There are times when a player can marvel at the craft of a game and not have it “click” for them. There are plenty of people who don’t care for the almost universally-lauded The Last of Us games. Maybe Spelunky doesn’t fit a mood or Diablo is just too grim for a member of the audience. This is the conundrum behind this review of Ghostrunner. To give the crux away now, developers One More Level, in conjunction with Slipgate6 and 3D Realms, crafted an astounding test of skill that works exactly as it was intended. For this reviewer, however, it doesn’t hit the way it should. This is a shame, as the game does what it sets out to do and it does it well.

The player awakens on a dreary rooftop with, all together now, a frustrating case of amnesia. All that’s known is that the protagonist’s hands are metal, a sword is carried and the use of it is instinctual. As the game moves along, it becomes known that the world around the player is that of Dharma Tower, the home of the last remnants of humanity. A cataclysm has rocked the world, leaving the planet a blasted husk. In this tower are beings known as Ghostrunners, basically cyberpunk bodyguards with carte blanche to protect and kill as they see fit, within reason. A voice in the protagonist’s head pushes the ‘runner forward in hopes of taking down Mara, the despotic Keymaster and matriarch of the tower. The story, when all is said and done, isn’t really the reason to play this game. It’s alright, but it never shocks or entrances. In practice, it feels like it’s there for the benefit of the aesthetic and abilities of the hero.

This isn’t a complaint, as the abilities of the hero are indeed cool. While reductive, the quickest way to describe Ghostrunner is to say it’s a cross between Mirror’s Edge and Hotline Miami. The Mirror’s Edge element comes into play with heavy first-person platforming elements. Much like Faith, the player can chain wall runs, climb, and slide with the best of them. Grappling hooks and air dashes are also added to the formula, giving the player more to do. The sections that focused purely on traversal and movement are the highlights. It’s exhilarating to combine all of the free running elements the game offers into a smooth combination stories above ground. Mixing in common platforming hazards, like electricity that must be bypassed with proper timing, and insta-death heated… pillar things works with the tools provided, even in the more generic “cyberworld” that pops up occasionally to provide a break from the game’s reality. 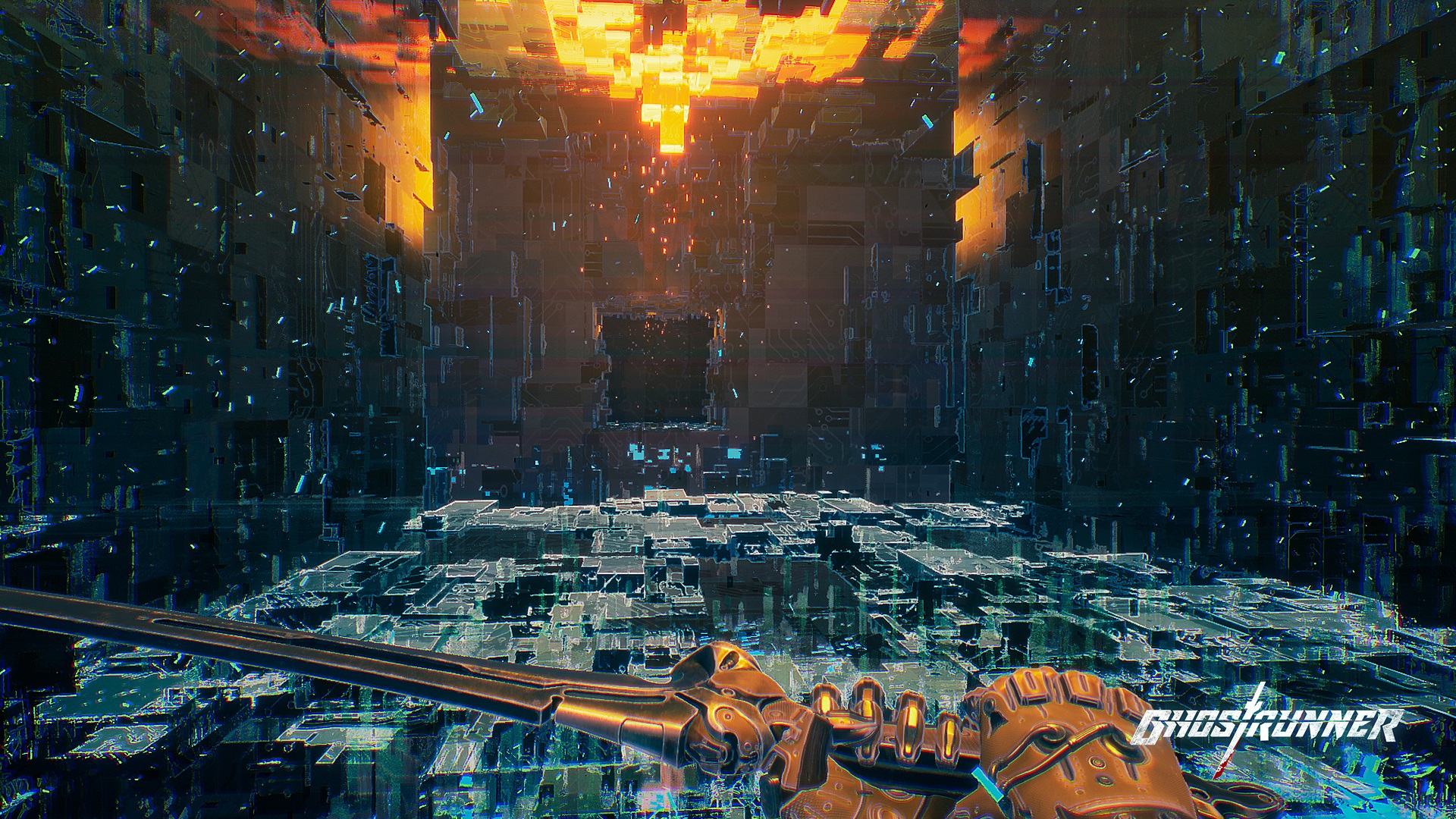 The Hotline Miami comparison comes in with the combat areas. There are sections that require the elimination of a series of ne’er-do-wells, using momentum to outrun the foe’s bullets, and sword swipes and shurikens to take out those same foes. In practice, these sections are visceral puzzles. There might be a couple of ways to solve them, but there is a path through that must be discovered. So, a section might require a precise series of wall jumps into a sword slash to disable a shield generator, into a swing to the opposite wall to take out another generator, before jumping down to begin dispatching the enemies. As the player will die with one hit, these can get tough, past the point of challenging and into annoyance.

Look, challenge is awesome. Hotline Miami was chosen as the combat puzzle example because it doesn’t hesitate to kick the player in the face. Each loss in that game is a learning experience, though. The player knows what got them and can learn from their mistakes to do better next time. It’s tough, but it never feels unfair. Ghostrunner blows past this level of challenge by virtue of its speed and first-person perspective. If the player slows down, that’s pretty much an instant death. Because of this, it’s difficult to take in what’s happening in the environment. Couple this with a grungy backdrop, one that makes sense in the world that has been built, and it’s easy for enemies to not be seen, even if an augmentation is installed to highlight them. Therefore, almost every death felt unearned by the game. An attempt would seem to be going perfectly fine only for the screen to turn red and the reload prompt pops up.  Without any real feedback as to what got the player, nothing is learned. This causes far too many of the combat sections to become trial and error until everything is known, which makes this more a game of memorization than player skill. Fortunately, reloading after death is instantaneous. 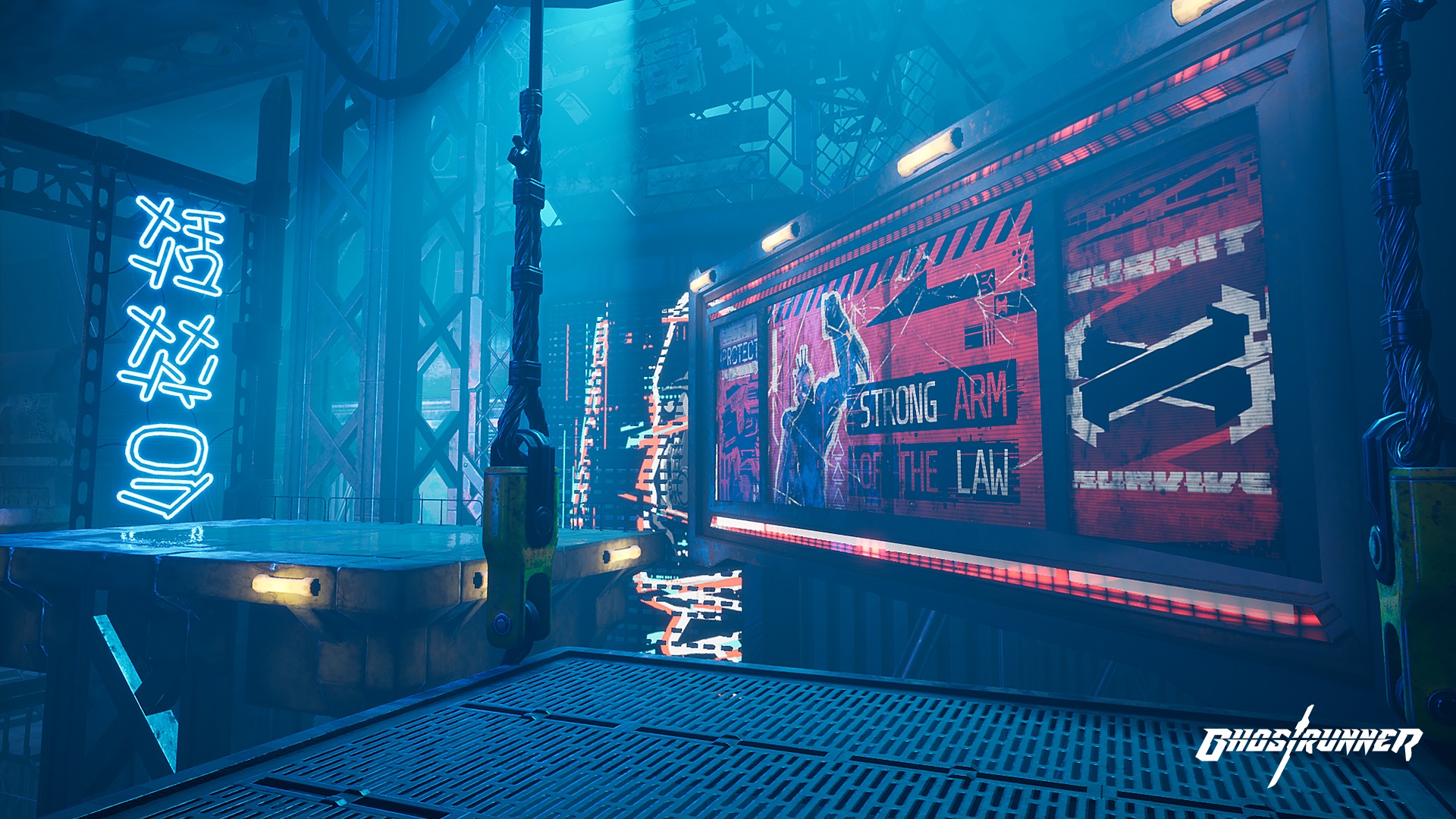 Some of this is mitigated by skill unlocks. The player is granted access to a grid that allows for skills and augments to be installed. Each of the augments have a unique shape, so it’s a matter of plugging in the desired traits to maximize the space given. It’s a little nifty side puzzle that works well. For reasons stated above, the enemy highlighting is a must. The other early skill given that was pretty much permanently installed was the ability to deflect enemy bullets back with a well-timed swipe of a sword. That latter skill made it easier to survive longer and learn the lay of the land, while still being sufficiently difficult to pull off to not seem like a cheat.

The strange thing is that this is a game that does get easier as it goes along. At periodic places throughout the campaign, new skills are awarded that allow for the runner to do serious damage or at least bail themselves out. Blink is the earliest example, allowing the player to instantaneously cut a swath through a line of enemies. There are some sections that were obviously designed to be completed with one of the special skills, and those tend to get irritating, but the fresh tools have a tendency to help the curve. This doesn’t mean that the title ever leaves the land of obnoxious, due to the guess work of the combat encounters, but they do improve the experience.

The music deserves all of the accolades, though. Before encountering this game, I had not heard of Daniel Deluxe. This is a shame, because the soundtrack that he provided is utterly fantastic. Mixing 80’s styled synthwave with atmospheric soundscapes isn’t uncommon. The driving, compulsive beat behind it helps to elevate it to something that can be listened to out of the context of the game and appreciated. It’s got a grimy retrofuture texture that captures the ears and makes much of the frustration worthwhile. 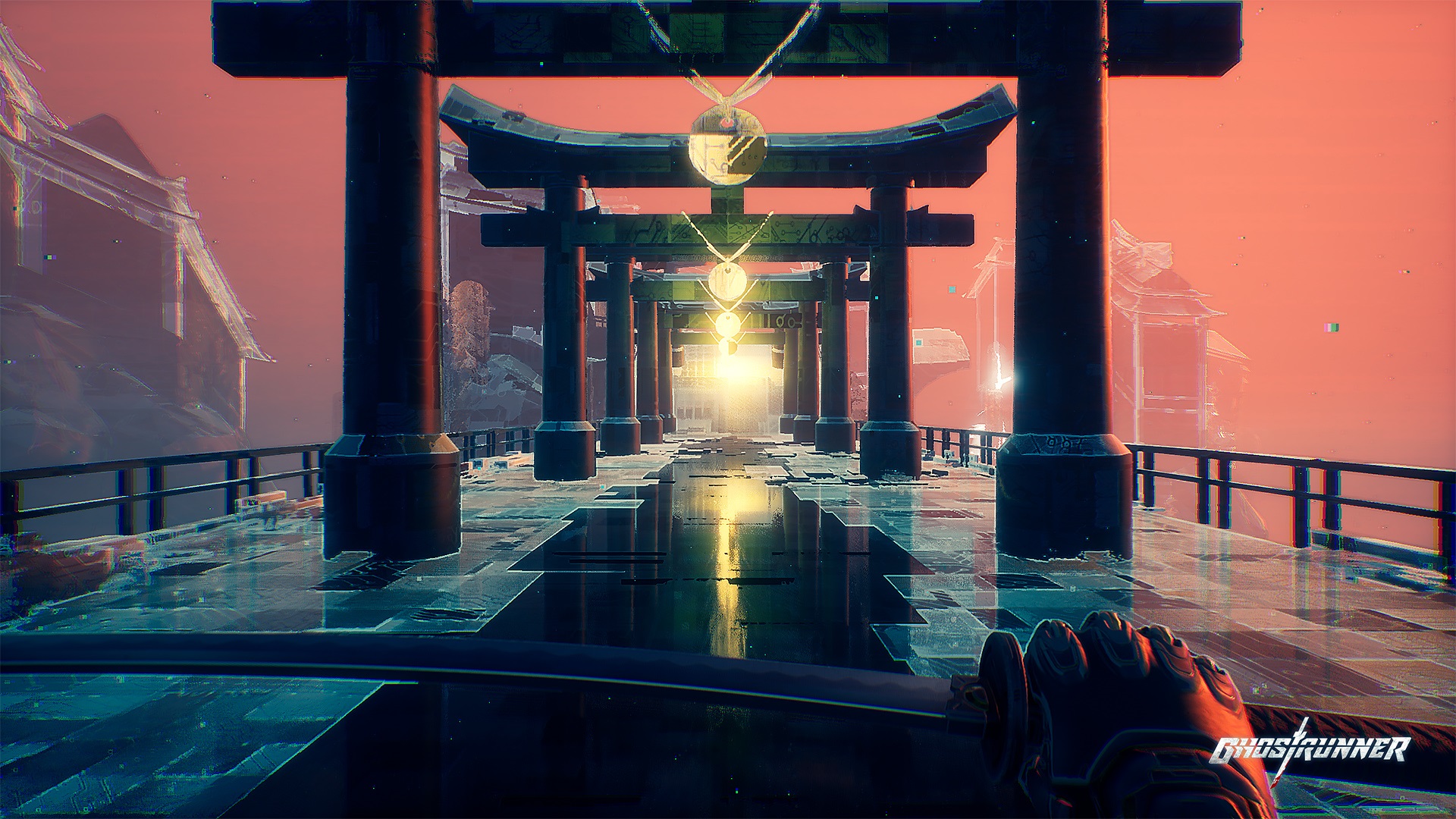 Let’s be clear here: a tightly-crafted, bug free game that does exactly what it wants to do, Ghostrunner deserves an audience. The appeal might not be universal, but the art and style behind the game cannot be ignored. It really is good, despite a personal distaste for how it handles certain elements. If a killcam is implemented to help the player learn their mistakes, then this title becomes an easy recommendation. Until then, check out the demo; it’s a good representation of what the game is. Anyone who enjoys that will have a blast with Ghostrunner. In the meantime, I’ll be applying salve to my now-wounded ego.