Gamers are spoiled for choice when it comes to microphones. Gaming headsets have included mics for years now. Although highly convenient, they often don’t provide the highest quality microphone audio. The market for standalone microphones continues to grow, especially as gamers pivot toward recording or streaming their gameplay. There’s also the ever-increasing market for people interested in starting their own podcasts. Sure, you don’t need high quality audio recording capabilities to do any of this, but it helps. Last year HyperX released the QuadCast USB condenser microphone to acclaim. This year they’ve updated this device with the QuadCast S to appeal even more to gaming tastes thanks to the addition of RGB lighting.

The HyperX QuadCast S packs a lot of great features into its $159.99 price tag. Some of the most useful features of this microphone include four selectable polar patterns (stereo, omnidirectional, cardioid, bidirectional), gain slider, an internal pop filter and built-in anti-vibration shock mount. Most standalone microphones don’t offer all these features in one package, instead requiring folks to purchase their own pop filters and shock mounts in addition to a pricey microphone. Cheaper microphones also tend to lack the four distinct polar patterns and instead only offer one mode. At this time, you also won’t find customizable RGB as an option on the consumer mic market. 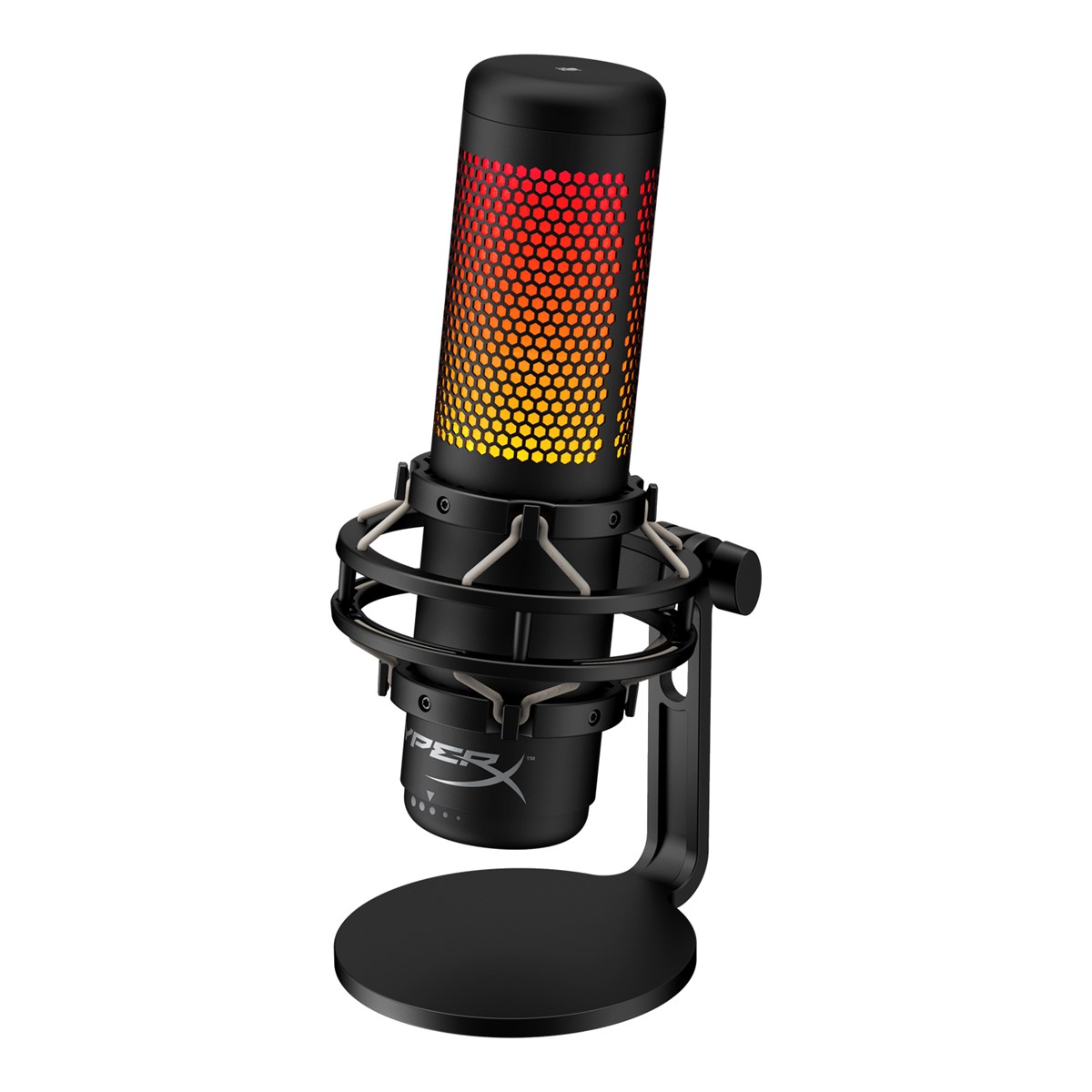 This microphone is for anyone looking to get higher quality audio for the purposes of streaming, narrating, podcasting or producing some other project that would benefit from good audio. It aims to be an all-in-one solution so that users don’t need to buy things like a pop filter separately. Those who don’t need RGB can grab the HyperX QuadCast for the cheaper price of $139.99. The two are basically the same aside from the RGB lighting. The microphone features a USB Type-C port to connect to your PC and a 3.5mm headphone jack to plug your headphones in if needed for monitoring or listening to audio.

The biggest differentiator between this microphone and its competition is obvious — the customizable RGB lighting. This does not extend over the entire length of the microphone. It takes up a little less than half of the microphone but leaves a huge impression. The lights are controlled by HyperX NGENUITY software. This is the same software powering HyperX’s line of RGB computing accessories such as keyboards and mice. Aside from lighting, the software can also be used to control microphone volume, headphone volume and microphone monitoring volume. Changing light colors allows you to change the specific colors, their opacity and speed of color transition, if desired, and then save them to the microphone’s memory. There are many built in effects which serve as color patterns. You can use the premade settings or create your own. The only downside is you can’t create your own pixel art designs. 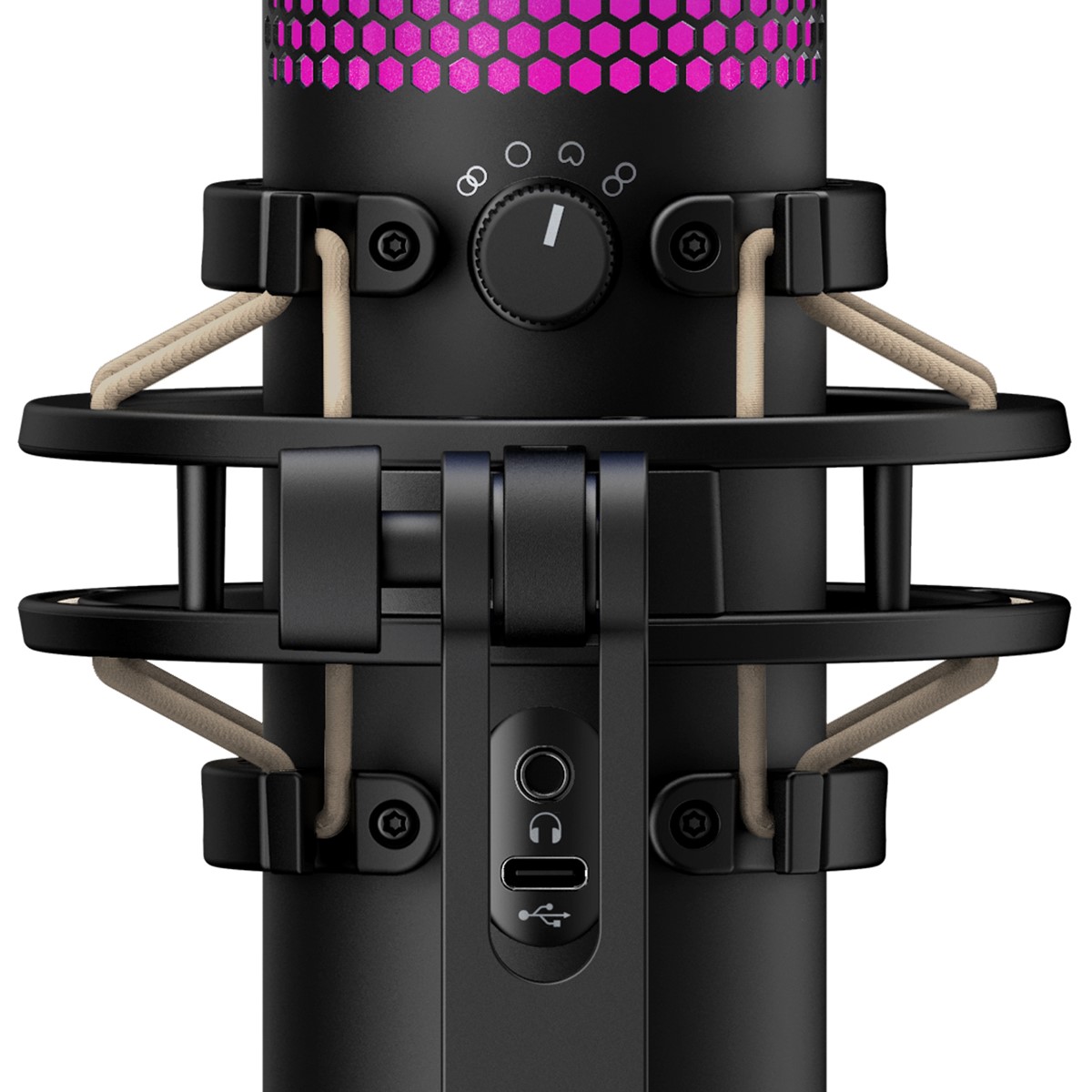 What exactly is a pop filter and why would you want it built into your microphone when most microphones don’t include one? A pop filter basically reduces plosive sounds, such as words that begin with “p.” Without one, these key words will often create a popping effect in the audio recording. It’s undesirable and why pop filters exist — to reduce the occurrence of popping sounds. Having it built into a microphone is handy and it works effectively in the HyperX QuadCast S. It also reduces the additional bulk that comes if you needed to strap a pop filter onto it. This microphone isn’t small at almost 10 inches tall and 4.5 inches at its widest point, so any chance to keep from expanding on its footprint is a big help.

As for the built-in shock mount, this is another smart design decision. When it comes to higher quality microphones, vibration is actually a concern. Without a shock mount, anything making the microphone vibrate can get picked up in the audio as a low rumble. A shock mount suspends the microphone off the ground, making soft vibrations a non-issue. The only downside of the HyperX QuadCast S shock mount is that it’s made of plastic. While it blends in with the black metal of the base, it would have been nice to see the shock mount also be metal.

The HyperX QuadCast S microphone comes with an included USB Type-C to USB Type-A braided cable. This cable is a little over 9 feet long. This is great news as it means your setup doesn’t need to be cramped. Also in the box is a mount adapter. This adapter is designed to fit ⅜ inch and ⅝ threaded boom arms or microphone stands. To mount the microphone, simply undo the screws connecting the shock mount to the stand. Of course, you can easily get away with using just the stand for recording audio. It’s sturdy and can hold the mic at various angles securely as needed. 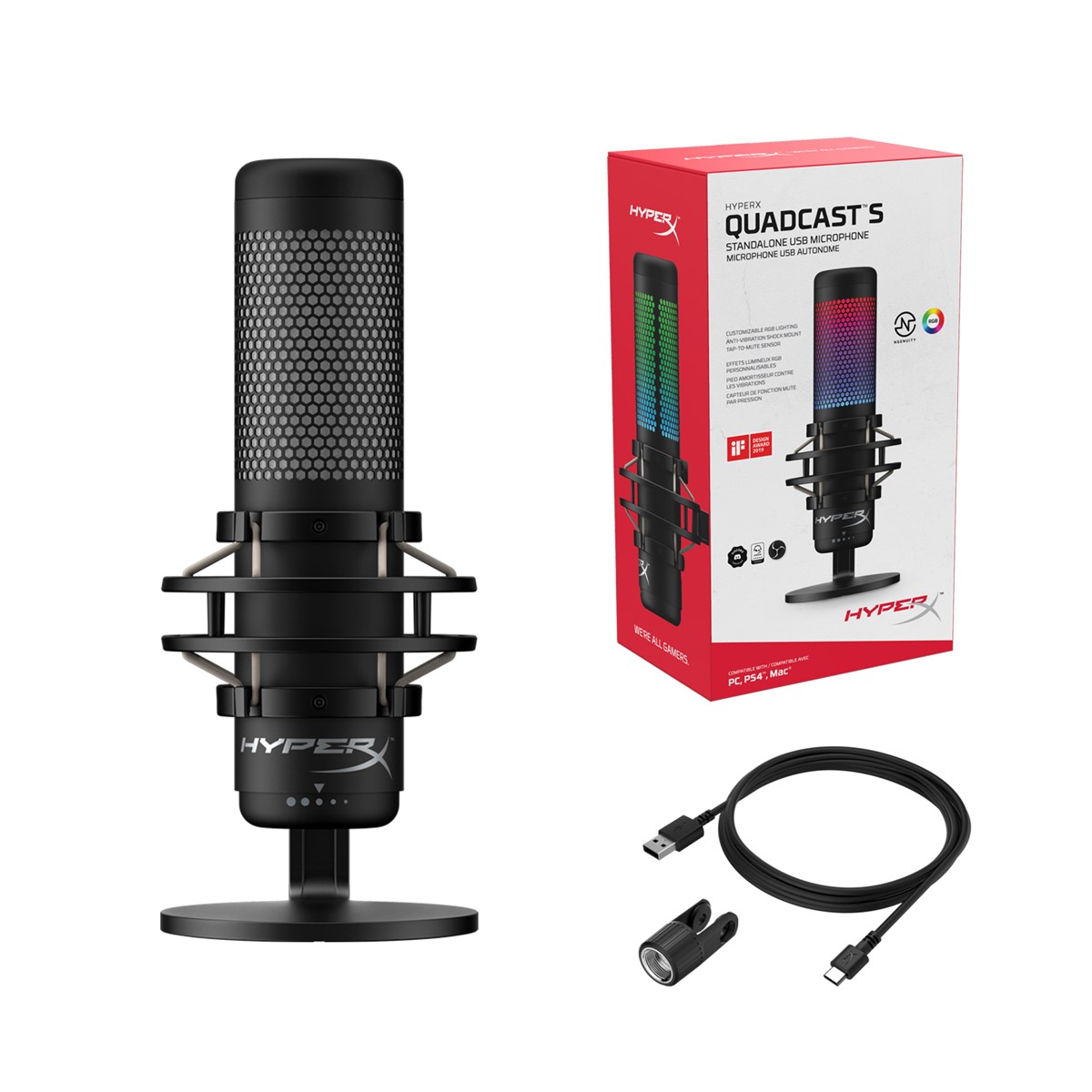 Overall, the HyperX QuadCast S is a tremendously fun enhanced version of the original QuadCast. It’s not a necessary upgrade, but it’s a perfect match for PC gamers with a love for RGB accessories. The HyperX QuadCast S provides excellent features for the price. It bests some of the other competition in this emerging space. Aside from excellent additions such as the pop filter, shock mount and four polar patterns, it looks stellar when the dynamic RGB is activated. Anyone looking for a microphone that’s both functional and attractive should consider the HyperX QuadCast S.