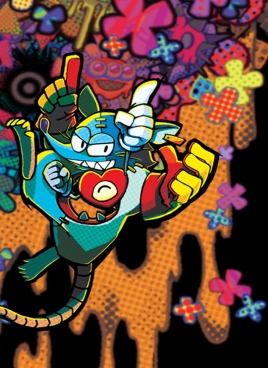 Nippon Icchi has crafted some of the most bizarre experiences in the industry and has somehow found a way to still do something new and a bit disturbing with Mad Rat Dead. It begins with the poor lab rat being sliced and diced up before he gets saved by the Rat God who lets him know that yeah, he’s dead — but he can use the beat of the music to rewind time and do whatever his heart desires. Since he didn’t ask to be born a lab rat and wasn’t about that life in the the slightest, he vows revenge on his master. This premise is awesome, but does bring about some interesting questions within the framework of the story.

All we know about his owner at this point is that he’s got a lab rat — so it’s not like he’s out to destroy the whole rat population, he’s just trying to do his job. Not that the rat is in the wrong for wanting to try to live or anything, but he’s coming at this from a weird angle and that’s something that the game calls attention to as when he’s given a chance to relive his last day on Earth, he doesn’t want to enjoy his time on the beach or anything — he just wants to kill. Right away, you get the sense that this rat is maybe a bit on the violent side anyway, and his perpetually pissed-off facial expressions indicate that he’s probably not the most pleasant rat to be around anyway.

The rat is able to live only due to the beat of the music — so if you want to move slowly, you just move right but speed is only accomplished with a right face button push in time with the beat. You’re graded on a combo meter for both dashes with that button, while the bottom button jumps and the top left button allows you to drop down from high ledges and take foes out. The combo meter is shockingly addictive even for someone who isn’t the biggest fan of rhythm games. Seeing it start off at one and then skyrocket into the teens, then hit 20 and then before you know it, you’re at 50 and surprised at not only just how much fun it is to increase your score, but how it keeps you glued to the action. 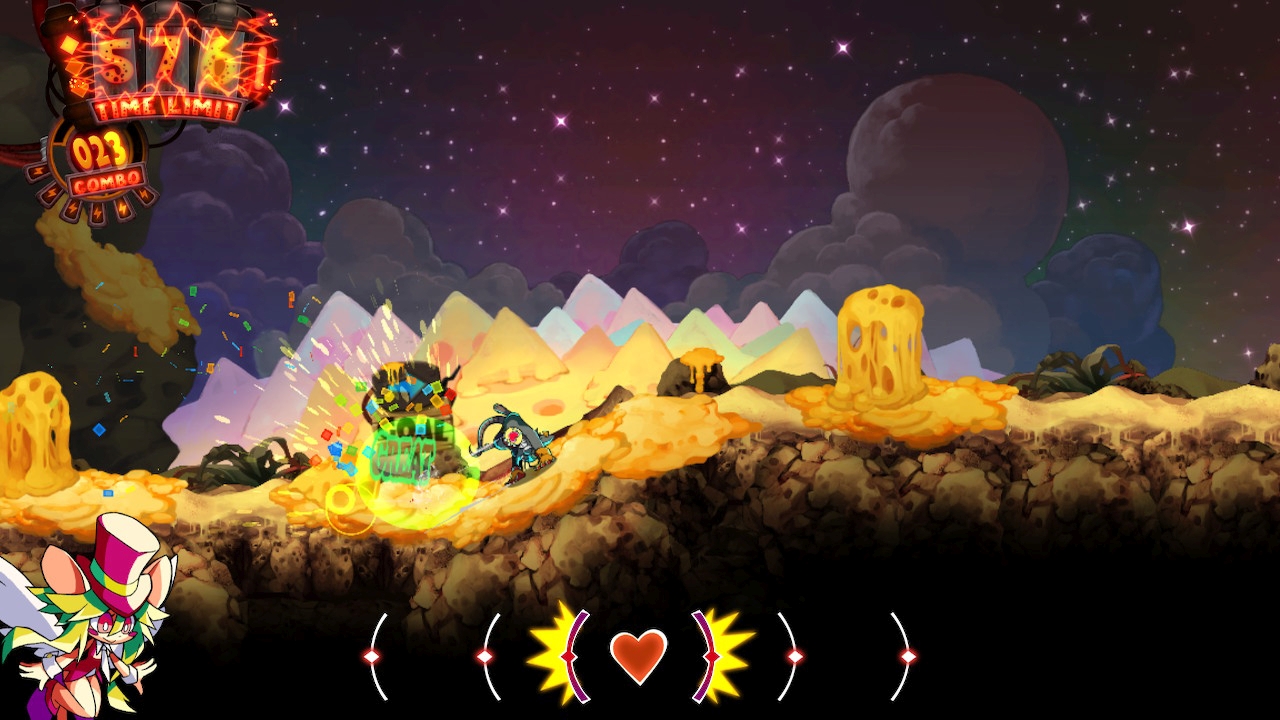 There’s a lot of subconscious fun to be had like that in Mad Rat because it’s such a sensory experience. The rhythm-based nature of things may seem intimidating at first, but as you go through the game, it’s clear that you’re being taught so much early on that you’ll use throughout the adventure without having to think about it. Early on, getting used to the timing of jumps and dashes before then tackling jumps and charged-up dashes is tough. As you move on, you get more used to the tactics thanks to muscle memory that you don’t have to think about them — you just do them. This goes double for attacks, which have a risk/reward to them because failing kills you and forces you to rewind time to a limited extent.

In rewinding, you can go back to a starting point, but it’s usually not ideal and requires you to correct course within a note or two. Over time, you come to realize that it’s better to nail things dead-on the first time as much as possible because while this isn’t an unforgiving game, death does have large consequences due to the rewind system not being frame-by-frame like it usually is in racing games and thus being less forgiving than it could be. This being a good or bad thing is going to depend on one’s perception of it because if you’re coming at it from the angle that games should be as user-friendly as possible, it’s bad. If you want to improve your play with each play session and learn more as time goes on, however, then a harsher penalty may be the best way to instill proper timing into players. It’s tough love in that regard, but still allows you to be armed with the knowledge to excel at the game over the long haul instead of making the short-term journey easier, but ultimately undercutting just what you can learn from that hardship. 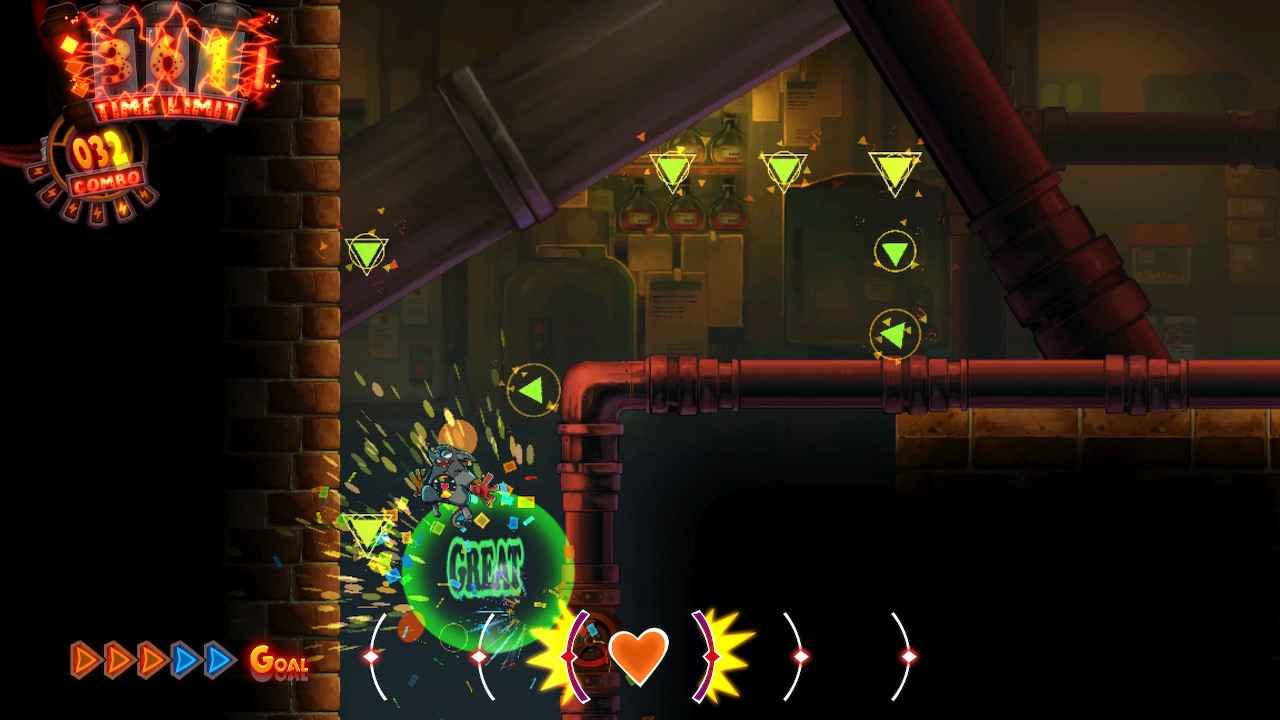 Mad Rat Dead is a feast for the eyes and ears, with a bright cartoonish art style that uses large black outlines and bold colors to make everything in the world look good. Every character, from the titular Mad Rat to his musclebound heart to the Rat God looks sharp and the environments themselves are richly-detailed and brightly-colored. Even in a dim setting like a lab, you have a lot of detail-rich sections like the tables or books that fall to kill you. Outdoor environments are even better, as you see a slew of different fall colors on the leaves after they’ve fallen to the ground, with a rich cityscape in the background showing off a world that looks a few years into the future, with thickly-clouded skies.

Musically, the pop-ish soundtrack is surprisingly catchy and at odds with the rather dark subject matter in a rather amusing way. It seems like an odd choice of music for a game about a murderous lab rat, and yet it almost works perfectly because it’s so ill-fitting. It’s kind of like a suit that’s too short, but amusingly so — so it goes back around to working better than one that fits perfectly. The songs are catchy and once you beat a stage, you can go back and hear the soundtrack without anything getting in the way. At the game’s suggestions, headphones really do enhance the experience and bring out a higher level of detail in the music — especially for things like cymbal crashes and hand claps that can help when it comes to properly-timing your movements. One cool thing is that beyond using audio to tell when you should do things, you also have the on-screen heart guide and controller rumble to guide your way. On Switch, HD Rumble really does work better than audio does at some points when it comes to properly-timing your attacks and it’s an impressive effect. Hopefully we see the game get a PS5 release down the road so the haptic feedback in that controller can be used to enhance that effect more. 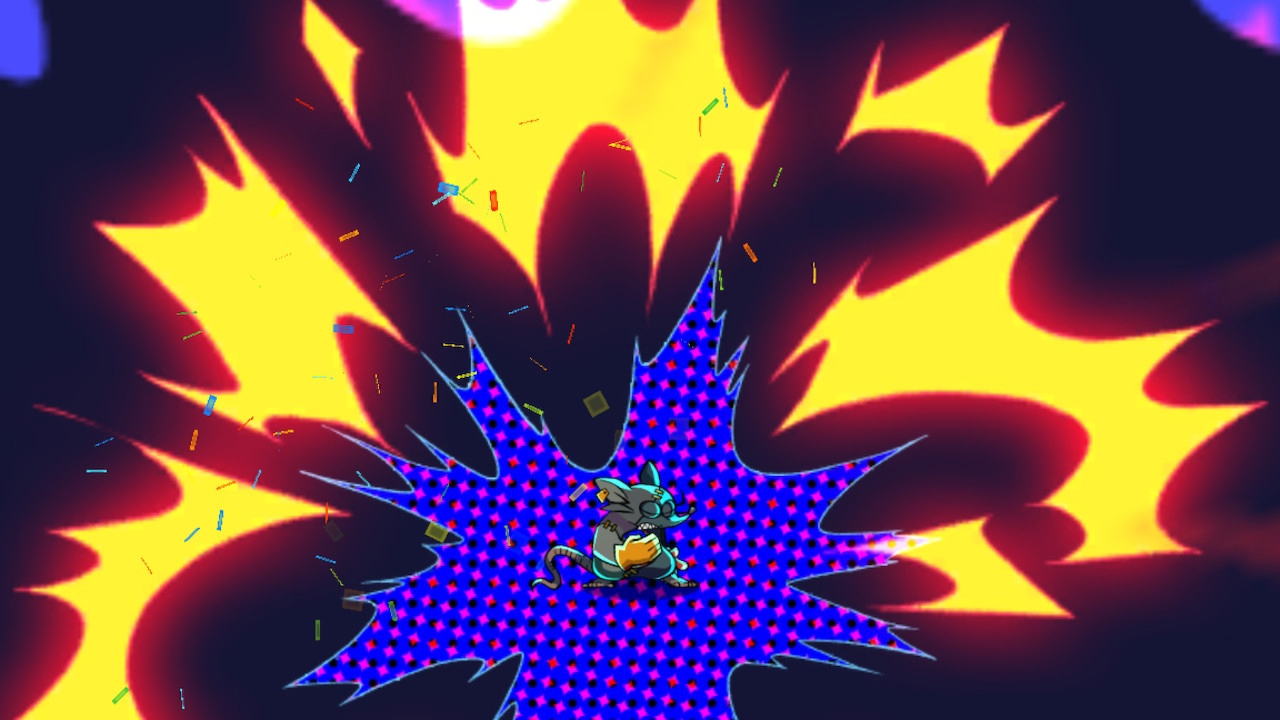 Mad Rat Dead is a bizarre game in many ways, but also one that executed its concept about as well as could be imagined. The concept behind it is insane even by NIS standards and yet it’s a blast to play and its smaller stages make it perfect for either smaller play sessions where you don’t have much time to spare or longer play sessions to tackle several levels at a time when you do. It controls like a dream and uses your hands, ears and eyes to their fullest to properly tackle its challenges. It’s off the beaten path of platformers, but it also has a free demo to check out and once you experience that, you’ll either be sold or you’ll know it’s not for you. If it clicks with you, it sticks with you, though, and Mad Rat Dead is a surprisingly addictive game that makes you think about things differently after you play it.