Thanks to the Nintendo Switch being a massively-popular console, there’s ample choice when it comes to picking up a new Switch controller. There are dozens upon dozens of licensed and unlicensed controllers in all manner of form factors and price ranges. Choosing the right one for you depends on what you’re looking for in your next controller. PDP is a licensed Nintendo partner who recently released another new option for gamers called the Little Wireless Controller. This cutely-named device touts itself as being small while still packing a big punch. Fortunately, it lives up to this promise thanks to a number of great features packed into the small form factor.

First and foremost is the greatest selling point of the unit — it features a forty hour battery life. Anyone trying to get by with Switch Joycons knows that those things don’t last long. Many other wireless controller options putter out well before forty hours as well, outside of Nintendo’s own Switch Pro Controller. When the battery is finally drained, you can then recharge it with the included USB type-C to USB type-A cable. A long battery life is necessary for any controller touting itself as travel friendly.

A feature that is sometimes missed by third party Switch controllers is motion control. PDP’s Little Wireless Controller features a gyroscope so you can use motion controls in your favorite Switch games. This is great news, as some of the system’s best games make use of motion control. With that said, not every Switch feature is represented with this controller. There’s no HD Rumble to be found. With that said, third-party controllers continue to lack this feature across the board (though some feature basic rumble functionality). As cool as HD Rumble is in concept, it has never seemed to find a great use outside of the launch title 1, 2 Switch. There’s also no NFC reader. Those out there looking to scan Amiibo will need to find another option. It’s likely thanks to a lack of these additional features that the Little Wireless Controller is able to last so long on one charge. 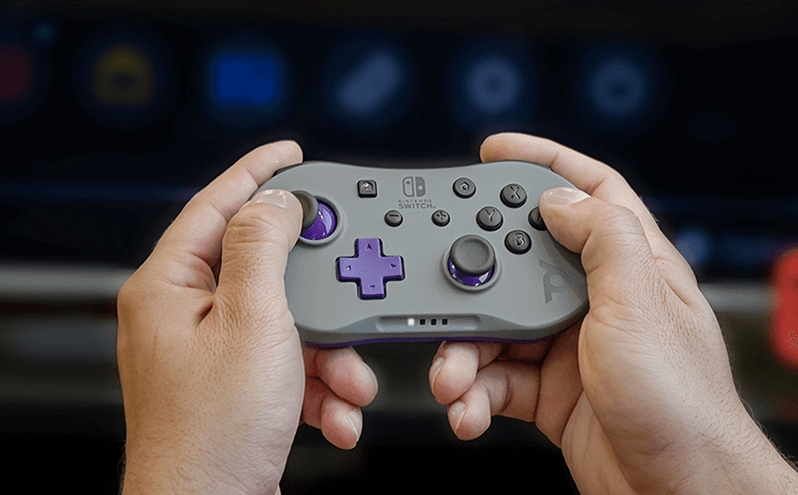 In regards to size, the controller itself is nearly the same size of a Pro Controller if you chopped off the handles. For another comparison, it’s similar in size of the 8bitdo line of SN30/FN30 controllers. Of course, 8bitdo fashions those in a much more clearly retro-inspired aesthetic than PDP did. That’s not to say PDP does not pay homage to classic consoles. The grey and purple coloration of the Little Wireless Controller draws clear inspiration from the Super Nintendo’s color scheme. The purple flourishes on the d-pad and analog stick stems look great, as does the split between gray front plastic and back purple plastic.

With all these features out of the way, the most important aspect of any controller is how it feels and functions. Fortunately the Little Wireless Controller feels great in the hand, uses quality parts and works well on a variety of game types. Retro and retro-inspired games are a joy to play with this controller’s d-pad or even the analog sticks which feature a textured grip. Modern 3D games are playable too since all the required buttons are included. It’s interesting to note that the d-pad is larger than it is on some other Switch controllers. This both makes it easier to hit the direction you want, but also increases the travel time between directions. Fighting game players who opt to use a controller rather than arcade stick would probably seek out one with a more standard d-pad size.

Both analog sticks click in if needed, and the L, R, ZL and ZR shoulder buttons are digital rather than analog and feel solid and easily distinguishable between each other. The A, B, X and Y buttons are surprisingly convex but not in a way that hinders gameplay. They’re just a bit taller than usual face buttons. The screenshot button is mercifully far enough away from buttons to not accidentally hit it during gameplay. The home button is a bit closer, but you’re not likely to hit it by accident either. Note that the analog sticks are in an Xbox-style orientation. Folks who prefer the PlayStation layout of analog sticks may prefer another controller. With that said, where exactly you like your analog sticks is totally up to personal preference and has no impact on gameplay. 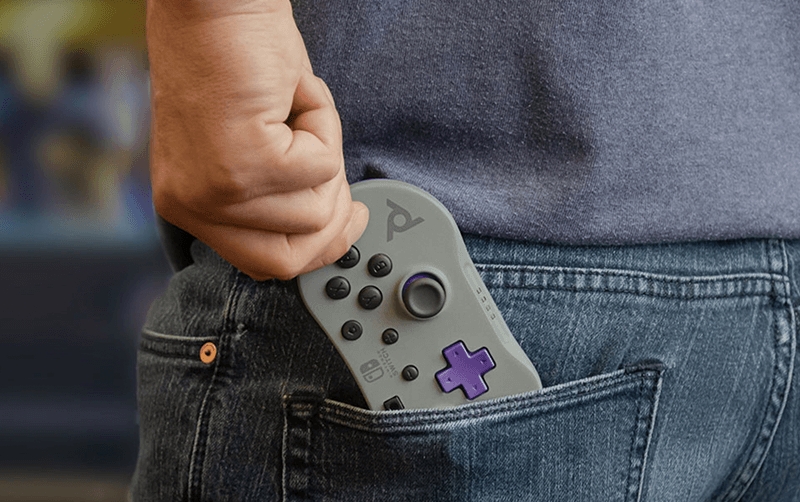 PDP’s Little Wireless Controller retails for $49.99. At that price, there are many other controller options which are both pricier and cheaper than this option. This controller is best for people looking for a high quality, officially-licensed controller with extremely long battery life as their main criteria. It’s also best for those who do not mind the sacrifice of HD Rumble. Anyone looking for a great, sturdy controller they can take on the go with them will be well-served by the PDP Little Wireless Controller.