Even with as brief a time the three-or-so hours gifted, playing through the opening parts of Twin Mirror felt as much an affirmation to Dontnod’s knack for tales dwelling in the smaller locales as it was confirmation that the Parisian studio’s latest — its second game to release in 2020 — was leaning in one direction on the studio’s own figurative scale of adventure games up to now. Where on one end you’d find the likes of Remember Me and Vampyr (story co-existing with a sizeable focus on combat/RPG mechanics) Twin Mirror evidently is aiming to sit neatly somewhere at the latter end of the spectrum. Where episodic games in Life is Strange and Tell Me Why reside. That’s not just because a lot of one’s time here was spent casually strolling from one interactive object to another. The kind of dominant storytelling — of which has as many (if not more) detractors as it does fans — you find yourself putting the controller down for more than the usual length of a typical cutscene. Twin Mirror clearly wants to set as much as the scene up as it can get away with. Less the scale of the stakes at play and more a snapshot of the impact felt by its local residents, in more ways than one.

There’s no shying away from how little physical involvement the player has in the opening. Involvement that isn’t just pointing towards objects to grab and maybe mull over in some otherwise informative/sarcastic manner. Twin Mirror wants to let the middle-of-nowhere aesthetic of fictional West Virginian town Basswood hang. And if the dominant color palette of brown, grey and brownish-grey doesn’t give away that something downbeat and less-flattering is afoot, Twin Mirror cuts right to the heart of main protagonist Sam Higgs’ apprehension on returning to the place he left two years ago. As an investigative journalist, Sam was the one responsible for the closure of the town’s mine. A key pillar of the community and one that some folks still bear a grudge over. Others swing the other way emotionally of course, but the key message the game wants to communicate here is the simple fact Sam finds little reason for being here. He does not want to be here — other than to pay respects to his recently-deceased best friend and fellow journalist — and it shows in Sam’s awkward, self-isolated demeanor. A demeanor which is tested by way of his conversations with his inner voice, the Double, a sort of younger-looking, younger-acting, emphatic prodding at Sam’s loner-type persona. 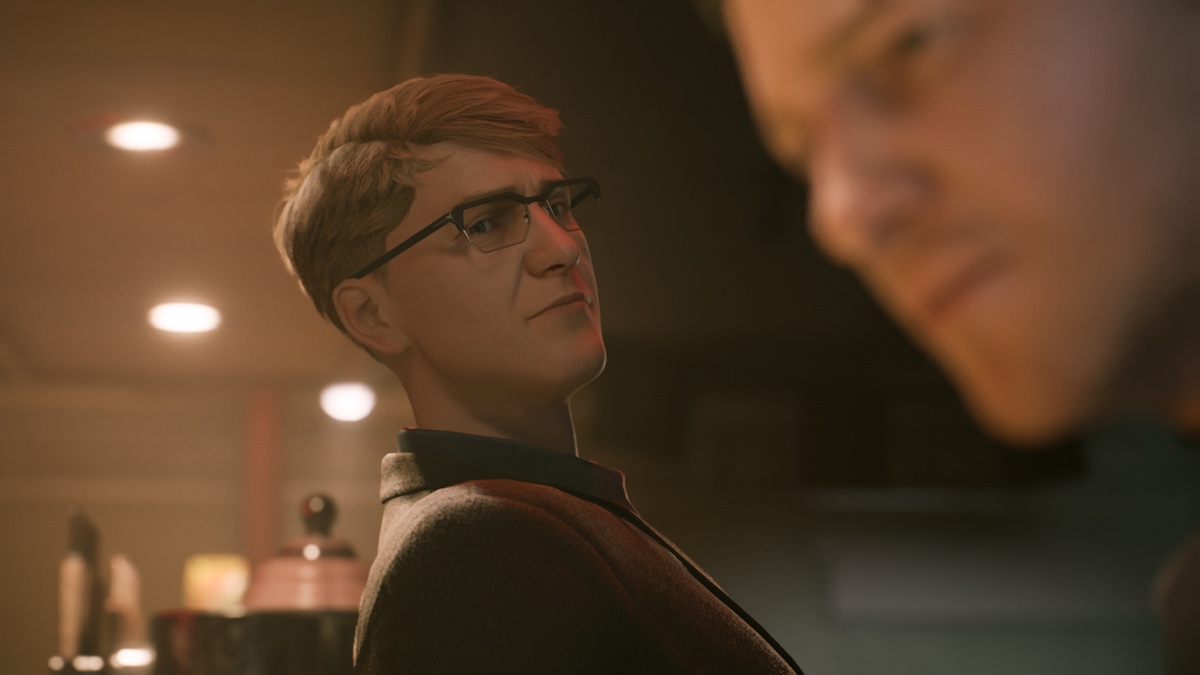 Combined with Sam’s frequent visits to his Mind Palace — an internalized assortment of memories both pleasant and not-so, also serving as the base for the detective-like deducing of how specific scenes played out — these elements are the only parts that deviate from the reality the game is trying to paint. Unlike Dontnod’s past work, not least the Life is Strange series, there are no supernatural aspects per se. It says something about the studio’s narratives prior that a character arguing with his “inner voice,” whilst taking plentiful trips to a habitable interpretation of his memories, can be considered “natural.” The point is, Twin Mirror is at least attempting to impress without the aid of “powers” or abilities or that which risks watering down the uneasy mood it’s painting. That may sound like a more challenging task — that deliberate scrubbing-away of anything that could be denoted as a unique gameplay mechanic, or at least a mechanic the player can freely engage with. And it could well result in a task too great, but from the first few hours at least, the dialing back doesn’t appear that costly. Because at least in terms of the writing, specifically Sam’s interactions, his mannerism, his jostling between apathy and empathy, Twin Mirror is intriguing enough in its approach.

Better still, there’s an unintended humor to have during such conversations when out amidst the streets. At a point where the real investigation starts, you can tell Sam has little, if any, interest in small talk, or talking for talking’s sake. The game even lets you further define Sam’s implied apathy, by interrupting certain characters for the sake of that important information. The result isn’t so binary though; sometimes the key details will come even after you’ve let a character babble on about this and that, in other cases you may have to interject. It’s a small ounce of risk in an opening period that so often lacks it. For all the thematic and tense shifts in scene-setting — of Sam willingly and in one case, unwillingly, getting flung into the embodiment of his current thoughts, masquerading as a chase sequence — a lot of Twin Mirror‘s actual gameplay is relatively untouched and potentially too formulaic. Here’s a limited space with which you can traverse; talk to as many people as you can find and decide what you want to say back. 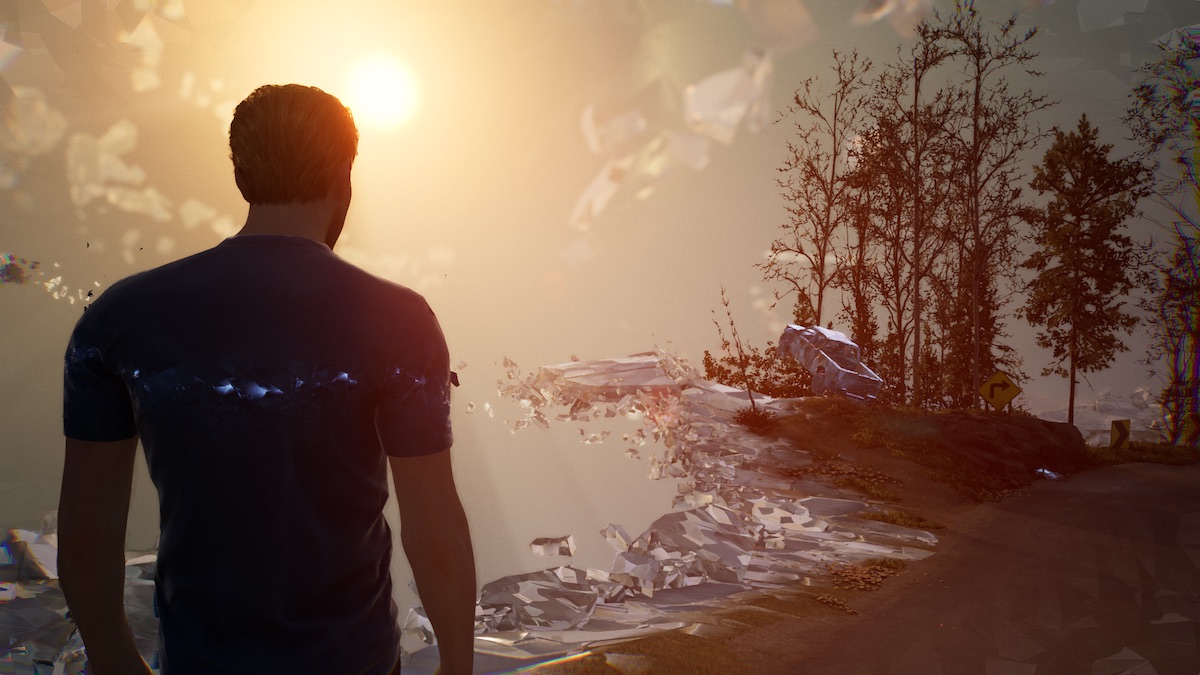 Even still, maybe it’s the comical way Dontnod frame these moments — the frequent shifting from Sam’s forced-smile of a look (that nodding, pretending-to-listen/care look we’ve all used at some point in our lives) to the eventual droning of someone going on and on about nothing. These characters aren’t bad people; Sam (and by extension, you) just have more pressing matters to attend to. At the very least, their issues and opinions on such are modestly believable. In a town that has seen its local economy hit, not to mention a journalist found dead — the base at which Twin Mirror‘s narrative quickly morphs from a simple funeral to something more conspiratorial — you can at least accept the local people’s many mannerisms. Even those that may fall a little too close to cliche unfortunately. In Dontnod’s defense, though, even the most caricature of incidents feel more than just some shoe-horned, one-dimensional excuse for “bad person is bad because X.. A gripe-turn-criticism I personally, disappointingly held for Life is Strange 2 but something that looks to have been rectified here in some capacity.

Eventually, events transpire and it isn’t long before Sam is having to do some digging all while keeping as low a profile as possible. How this translates through into gameplay is for the most part a relatively familiar affair for anyone having played past Dontnod works. Snoop around select interiors for clues, surmise a connecting thread, on occasion choose between one of two branching choices that the game (as you might expect) makes sure to remind you will have lasting, eventual consequences. Even if those consequences aren’t as immediate as you might think. Lastly there are cases where you’re required to reconstruct scenes based on the evidence you find and of the situation posed before you. Working out what caused a particular circumstance to occur, even if it’s the standard, trial-and-error affair of slotting all figurative pieces into play and seeing what fits. It’s not the most original premise nor is it the most engaging, but while Twin Mirror isn’t winning any awards on originality, there’s a sufficient amount of mystery and concern, fortunately, with the ramifications of one’s choice to keep you fixed on the story. 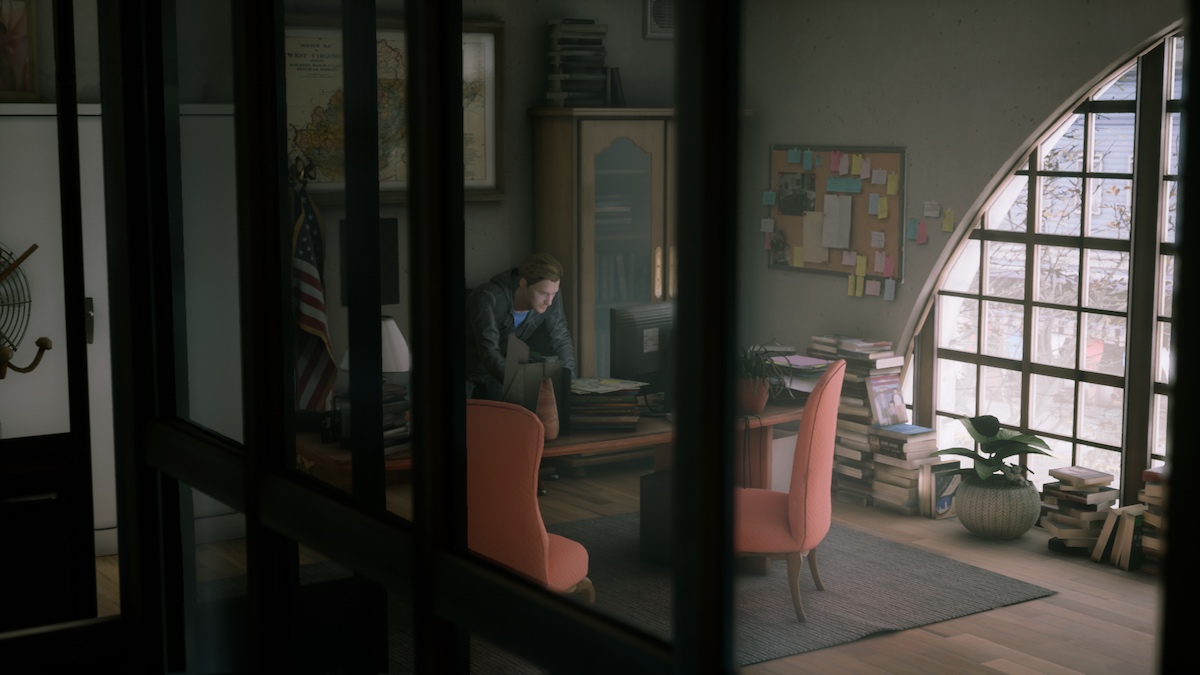 A story that, come December on release, might be what sells us on Twin Mirror as Dontnod’s next “non-supernatural” adventure game, set amidst small-town uncertainty. It’s that very small-town aesthetic — the rooted-in-believability vibe permeated through its townsfolk and bordered-up buildings — that initially draws you in and partly the reason why many may want to see how the events around Basswood unfold. Though the complimentary change in color/visuals between the reality of Sam’s world and the manifestation of his Mind Palace is of course welcome too, it’s his interactions (between both other people, as much himself) where the allure of branching choices may play a crucial part. Clearly it’s a case of who wins out here — the head or the heart — but Dontnod are posing said dilemma in an interesting way here. Even if the game doesn’t turn out to be the most mechanically engaging, what Twin Mirror may well lack in physical interactivity, it could make up for through its characters, its setting and its many repercussions. Twin Mirror releases across PS4, Xbox One and PC on December 1.