Anybody who has had the pleasure of walking up to a Dragon’s Lair arcade cabinet for the first time likely had two emotional responses after playing: confusion from seeing a knight be brutally killed five times and anger from losing two quarters. Even nearly forty years after release, Dragon’s Lair remains a unique game that will challenge players perhaps now more than ever with its lack of clear instructions and required perfect timing to complete. It’s a recipe for frustration, but also for addiction and accomplishment, and it’s one of the reasons why Dragon’s Lair has enchanted players and gobbled quarters for nearly four decades. Due to the high cost of initial ownership and subsequent maintenance, it’s rare these days to encounter a Dragon’s Lair cabinet in the wild, so when New Wave Toys announced their next miniaturized arcade cabinet project would be Dragon’s Lair, it was cause for excitement. It’s been a year in the making, but we finally got our hands on a Dragon’s Lair x RepliCade and tried our best to not let mini Dirk die a million mini deaths.

Dragon’s Lair sees players taking on the role of the slightly-goofy knight Dirk as he enters a bizarre castle full of labyrinths and certain death to rescue Princess Daphne from the clutches of the evil dragon Singe. This is no ordinary castle, however, and contains multiple rooms and floors of beasts, traps and somehow even a giant multi-colored rolling ball ramp that must be avoided to slay that pesky dragon. Dragon’s Lair was revolutionary upon release, as up until that time video game graphics consisted mostly of rudimentary 2D sprites with games like Pac-Man and Space Invaders filling arcades. Suddenly a game came along that’s fully-animated and 3D (sort of) and it collectively blew the minds of those who played it. The visuals were a clever invention that consisted of gorgeous, hand-drawn animated scenes from the legendary Don Bluth that were loaded onto a LaserDisc that could accept basic input to tell the LaserDisc player to skip to a scene. So if a player encounters a snake and correctly slays it, the pre-rendered scene continues, but if the snake gets the best of them, the LaserDisc quickly skips to a pre-rendered scene of Dirk dying. It was a clever way to get around the technological restraints at the time and due to the beautiful animation, looks as good today as it did in 1983. 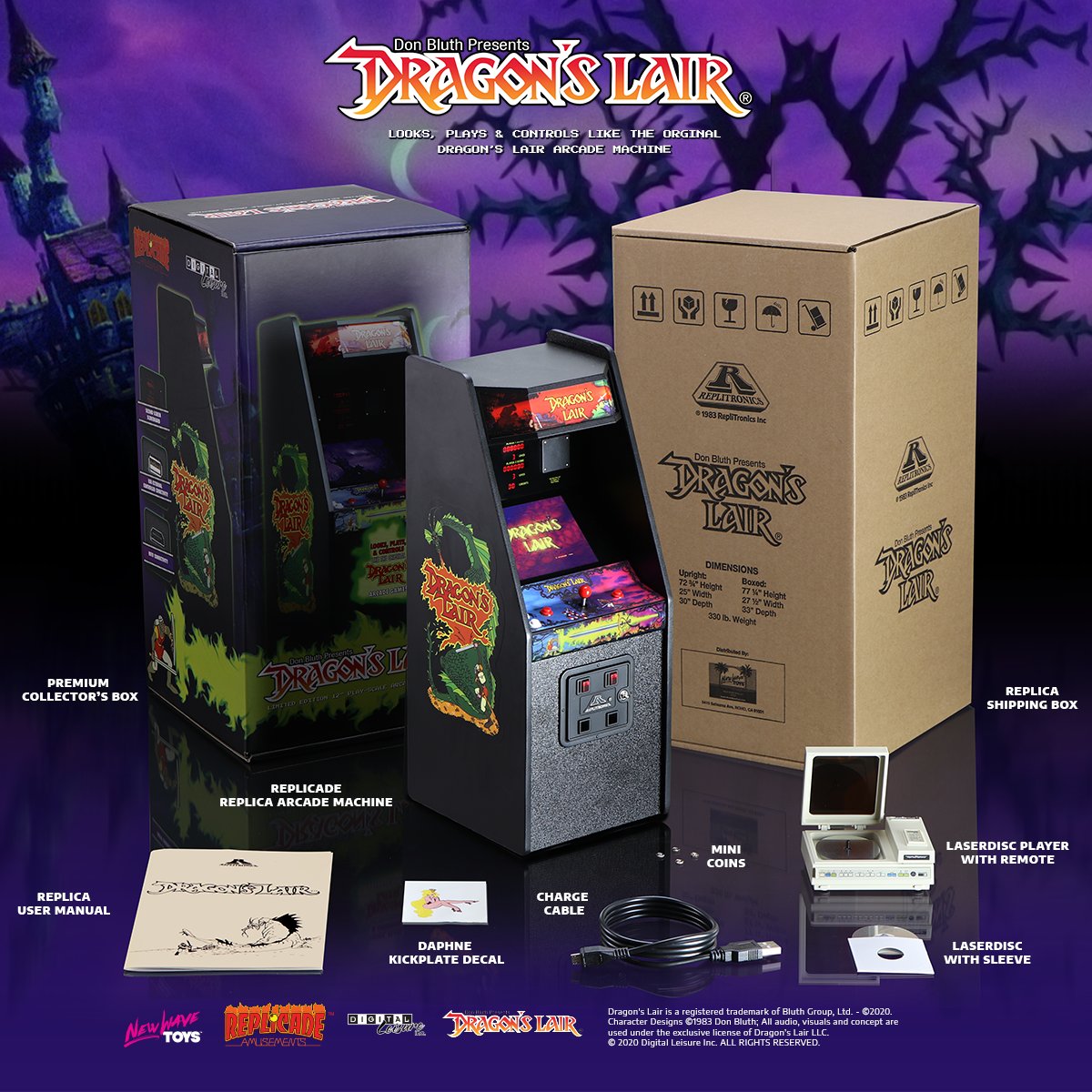 Dragon’s Lair is interesting from a gameplay perspective as it’s one of the hardest games ever created for the uninitiated and takes countless sessions to master, but once it’s memorized and practiced, it’s not uncommon to see somebody able to beat the entire game on a single credit. While other games at the time also relied on memorization, a perfect game of Dragon’s Lair will always go the exact same way, which is the main downside of it and similar games Cinematronics published in the ’80s. That being said, it shouldn’t be understated just how difficult it is to figure out, memorize and master the timing of each room, so there’s tons of hours of replay value here (and many players will give up before getting to that point). Plus you’ll have to play every so often to refresh your memory and it’s just plain fun to see play out, which is why the game has been ported to practically every console under the sun (including standard DVD players, which was confusing back in the day for those who weren’t familiar with the series).

When Dragon’s Lair was first released, it was a massive hit that raked in quarters and saw many spend hundreds of dollars on mastering. The great thing about the Dragon’s Lair x RepliCade is that it provides the closest experience to playing it in the arcades, but will likely pay for itself after just a few hours for those who want to play the “arcade” version but don’t own an original cabinet. This RepliCade couldn’t have come at a better time, as it just so happens that a local arcade acquired a pristine Dragon’s Lair full-size cabinet that I’ve been attempting to master, so not only is this great quarter-saving practice for me personally, but I can give a more accurate idea of the accuracy of the cabinet. To address the elephant in the room, Dragon’s Lair isn’t exactly the most attractive arcade cabinet from the ’80s. It has a boring black finish, no t-molding, small side art and a subdued marquee. That being said, it does have its charms: the hexagon-esque shape of the marquee is unique, the side-art is charming and the control panel has a pleasing blue/purple color scheme. One of the most interesting aspects of the cabinet, however, is a LED scoreboard and front-facing speakers above the screen. 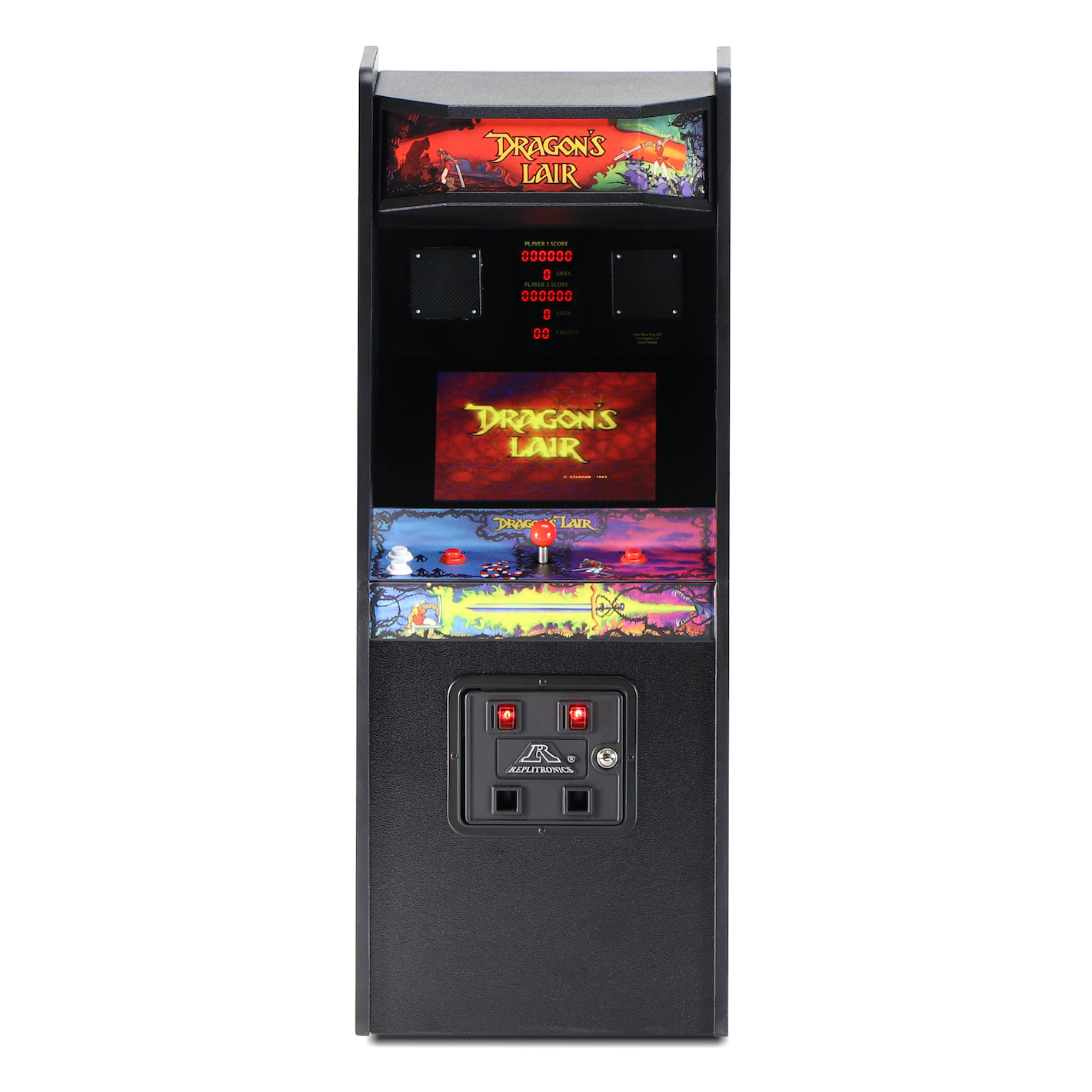 So while the RepliCade isn’t inherently the most attractive cabinet, has it been successfully captured in miniature form? The answer is a resounding yes. It starts with the shape of the wood (yes, wood) cabinet, which perfectly replicates the slightly odd slope of the original machine and extends into the side art which is correctly scaled and positioned and is a high-quality decal bursting with color. The unique hexangon-esque shape of the marque is perfectly duplicated and brightly lights up as a faithful beacon to prospective players. The most impressive aspect, however, is that of the functional LED scoreboard. When New Wave Toys first announced the Dragon’s Lair cabinet, I assumed this portion would simply be a decal, but they actually came up with a way to make it functional and completely faithful to the original cabinet. Whilst playing the game, the LED display will accurately show Player 1 score, Player 2 score (if applicable), remaining lives and inserted credits. It updates as it should as the game progresses and the red LEDs are bright and crisp. It’s a highly-impressive feat and shows the admirable attention to detail RepliCade continues to bring. And yet, it’s not the most faithful feature worthy of lauding.

That belongs to the LaserDisc player. Yes, the Dragon’s Lair x RepliCade has a slot on the back that when pulled out reveals a miniaturized version of the LaserDisc player in the full-size cabinets. And the best part? A little tiny remote and Dragon’s Lair LaserDisc that can be placed inside of it. Before you get too excited, the LaserDisc component is non-functioning plastic, but the fact that the creators spent the time including a little LaserDisc player is the definition of going above and beyond and is as impressive as it is hilarious. But even though it seems like a cool gag on surface level, it truly does further the illusion that you have a shrunken down Dragon’s Lair cabinet in your hands. 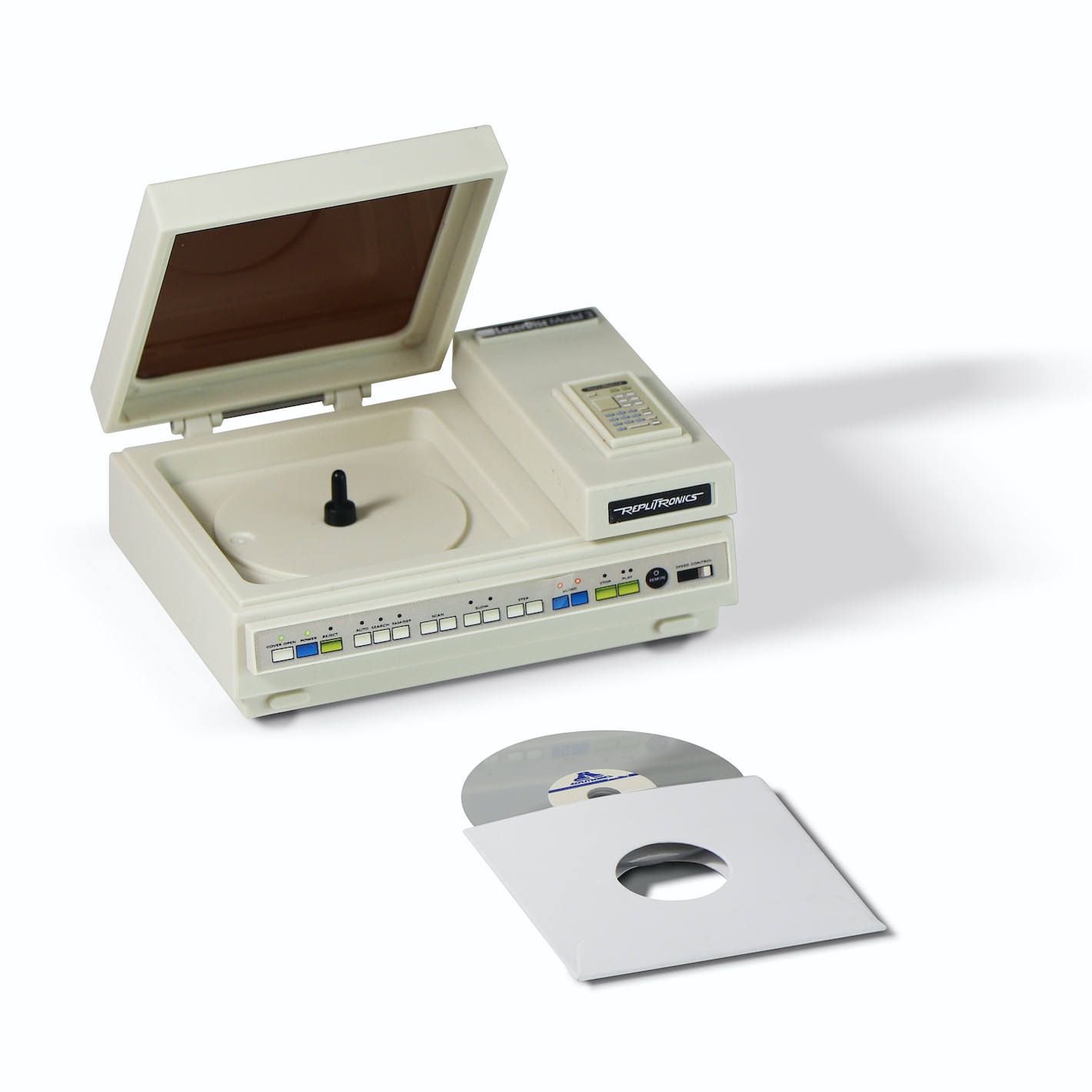 The Dragon’s Lair x RepliCade not only looks the part, but plays the part as well. I directly compared the RepliCade with the full-size cabinet and it’s startlingly accurate. Everything functions as it should, the full game is there, the sound is balanced and audible and the screen although small is easy to make out. I expected the LED to be dim or washed out, but it’s surprising just how bright and crisp the visuals are, almost as if the game really were being played directly from a LaserDisc. Of course perhaps the biggest question mark is how it handles in miniature form, and the answer is arguably the best of any RepliCade thus far. Because Dragon’s Lair is a game that features minimal input, having to use a miniature joystick and button never get in the way and it’s easy to forget that you are. There’s no having to pull of complex moves with your fingertips; just simply needing to sit back and push the joystick in a single direction and hit a button every so often. It also helps that the joystick feels surprisingly firm and accurate to the full-size version and as such doesn’t result in any errant movements, which is crucial in Dragon’s Lair. There’s also an ability to adjust the settings of the game, which include changing the amount of lives per credit, the difficulty of the game, screen brightness, marque light, attract mode audio, joystick sound, adding screen blanking (the loading between screens the original arcade unit had; another impressive attention to detail) and altering the attract mode (which is one of the best of any ’80s game, it should be added). Finally, the unit features HDMI out to play on a TV if desired and two USB inputs for third-party controller if the joystick gets to be too small for your liking.

It’s hard to find any negatives with this unit, but an inclusion that would have been nice would be adding the ability to turn on on-screen prompts to show which direction to go. While the arcade version didn’t have this, subsequent ports sometimes have and it’s a nice feature for those learning the game to figure out a solution to a complicated room (and still remains challenging as memorizing said solution is the tricky part). Of course, this wouldn’t be faithful to the original experience, and it’s a fine line when including subsequent improvements of these classic games when attempting to preserve the original experience.

New Wave Toys have hit it out of the park with the Dragon’s Lair x RepliCade. With accurate physical design, gameplay and functionality, it’s hard to find anything to criticize. It’d be nice to have features from subsequent re-releases of the game and the coin door could be a bit easier to open, but those are minor issues that quite frankly don’t register in the grand scheme of this mini arcade cabinet’s quality. Showing laudable attention to detail, the fact that there’s a tiny LaserDisc player and LaserDisc inside proves that its creators truly cared about delivering an accurate, nostalgic product. The Dragon’s Lair x RepliCade is a home run for retro gamers and Dragon’s Lair fans alike and couldn’t have come at a better time with the holidays right around the corner.