No matter the aliens, they’re generally good at two things — attacking the Earth and exploding into chunks.  Whether they’re demons from hell or a mad despot’s intergalactic army, eventually they all show up at humanity’s door.  To be fair, it usually goes well for them right up to the point a hero rises from the beaten-down wreckage of civilization, so it’s hard to fault them for trying.  Eventually, though, it all comes out the same, with the walls decorated in alien-gore.

The invaders of Prodeus are a little different than standard, in that they’re interdimensional rather than interstellar, but the rest is familiar enough.  Carnage and destruction have turned a planetary outpost into a killing ground and a lone human seems little match for the creatures who have taken over.  Armed only with his fists, the first few walkers go down after getting a few solid hits of their own in first, and then the first weapon shows up and everything changes.  It’s just a pistol, nothing fancy, but with a satisfying impact from its primary attack and an alt-fire that comes with a slight zoom and three-shot burst, it’s more than enough to get a toe-hold on survival. After that, it’s time to get killing in earnest. 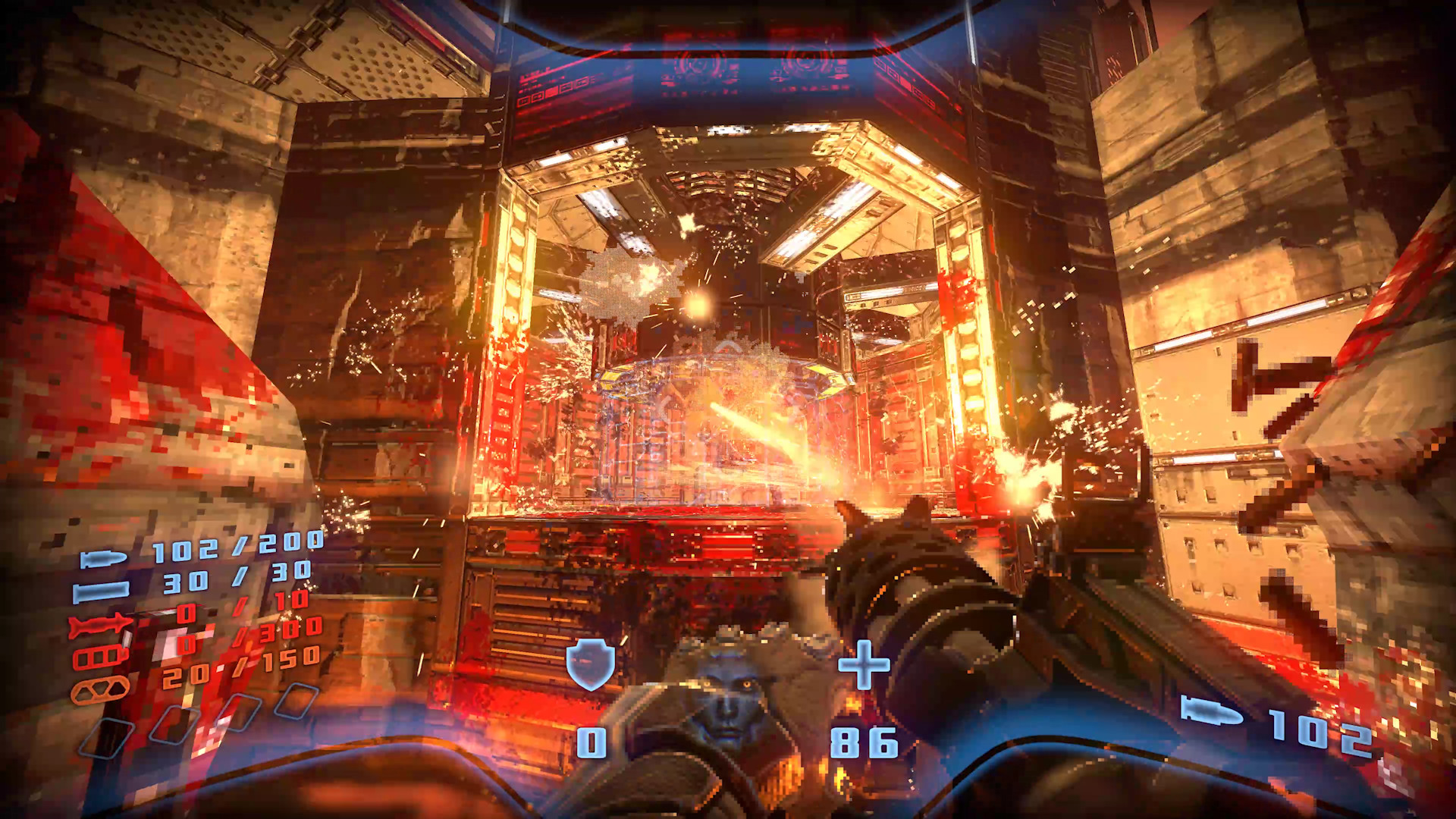 Prodeus is a fast-action FPS that’s a proud throwback to the days of the original Doom, featuring levels that are more useful as intricate combat arenas than whatever purpose they were designed for.  Crashed spaceship in a crater?  Sure, spaceships are known for their hidden rooms filled with health and ammo, but seeing as it’s also overrun with gunners, fireball-throwers, exploding flying things and other monstrosities that’s probably for the best.  Every level is a fight from start to finish, with enemies waiting for the player to show up or teleporting in when triggered.  The bleak, sci-fi industrial areas switch back on themselves and have a good amount of secrets to find, but whatever their original purpose may have been they’ll also be covered in an incredible amount of monster gore after a firefight.

While the lo-fi design is a throwback to the Build engine of Duke Nukem 3D, there’s a lot of modern power making Prodeus‘ pixelated textures look great.  Most notably is the way everything you shoot is a blood-fountain, splattering the area with red, orange and blue gore that flies everywhere.  The gun sound effects already give the bass a good workout, making each shot feel satisfyingly powerful, but combined with the visual feedback it amps up the punch of the weaponry to a ridiculous amount.  Sinking a rocket into a floating orange gas-bag and seeing it splatter everywhere, or pinging a shot off an exploding barrel to watch enemies disintegrate as the fire spreads, is endlessly entertaining.  Plus if you’re feeling like that’s just not enough, pumping a few more shots into a dead body makes it explode.  It’s sick and wrong and will nobody think of the children, and great fun to boot. 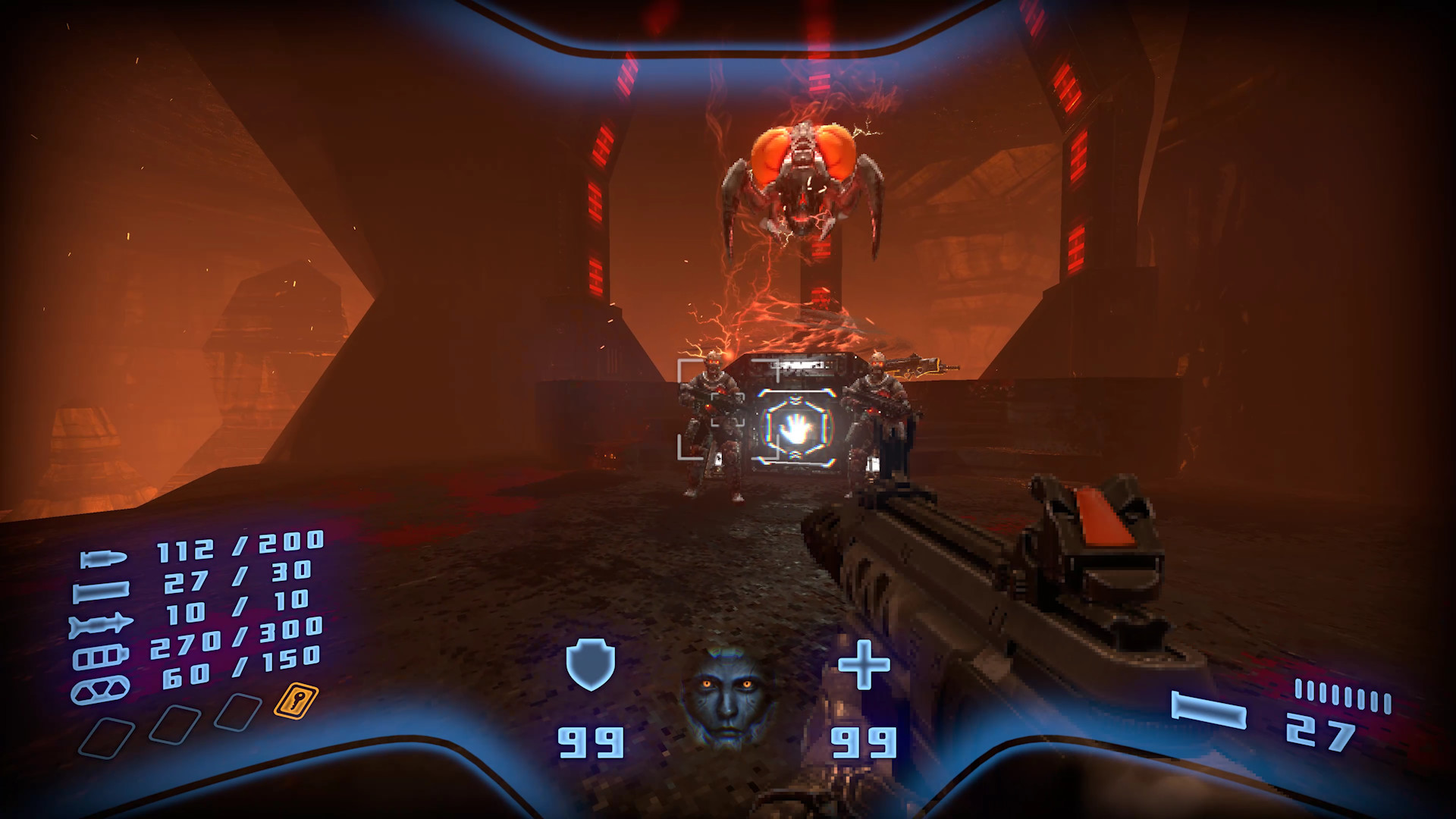 The Early Access launch of Prodeus is off to a great start, with excellent level design and action, but there’s still work left to do.  The campaign is incomplete, more monsters and weapons are on the way, and multiplayer is in the works.  There’s a good amount of content even taking that into account, including challenge levels and a level editor, the latter of which already has a good number of player-created maps to download plus a couple of campaigns.  The important part, though, is that Prodeus feels great to blast through, running at full tilt through the low-poly worlds while monsters spawn all around, dodging incoming fire while deciding if the super shotgun or chain lightning is the best tool for crowd control.  The aliens may be interdimensional this time, but wherever they come from they’re still the same gun fodder as always, brutal and dangerous right up to the point they’re dismembered by a satisfying rocket to the face.