New console generations are usually split into two categories; cross-gen and next-gen exclusive. While first-party developers tend to work on exclusive titles for their new platforms, third-parties focus on delivering an experience to all players. Every now and again, however, there’s that third-party developer/publisher willing to forsake the current crop of consoles to build something spectacular for next-gen. This is the situation that Counterplay Games and Gearbox Publishing find themselves in with Godfall, a looter-slasher, melee action-RPG. We’ve gotten to sink many hours into Counterplay Games’ first project. While we aren’t ready to render a verdict yet, we can say it’s been an enjoyable ride so far.

Godfall takes place in the world of Aperion. You play as Orin, a Valorian Knight seeking revenge after his brother, Macros, betrays him. To do this, Orin must travel across four elemental realms, hunt down his allies, and forge powerful Valorplates. As a console exclusive to the PS5, Godfall makes use of the console’s increased power to deliver gorgeous visuals and detailed worlds. It also makes strong use of the SSD to provide short load times, and the DualSense’s adaptive triggers and haptic feedback to provide a more immersive experience. You’ll feel sword clashing and the earth shaking from the might of warhammers. 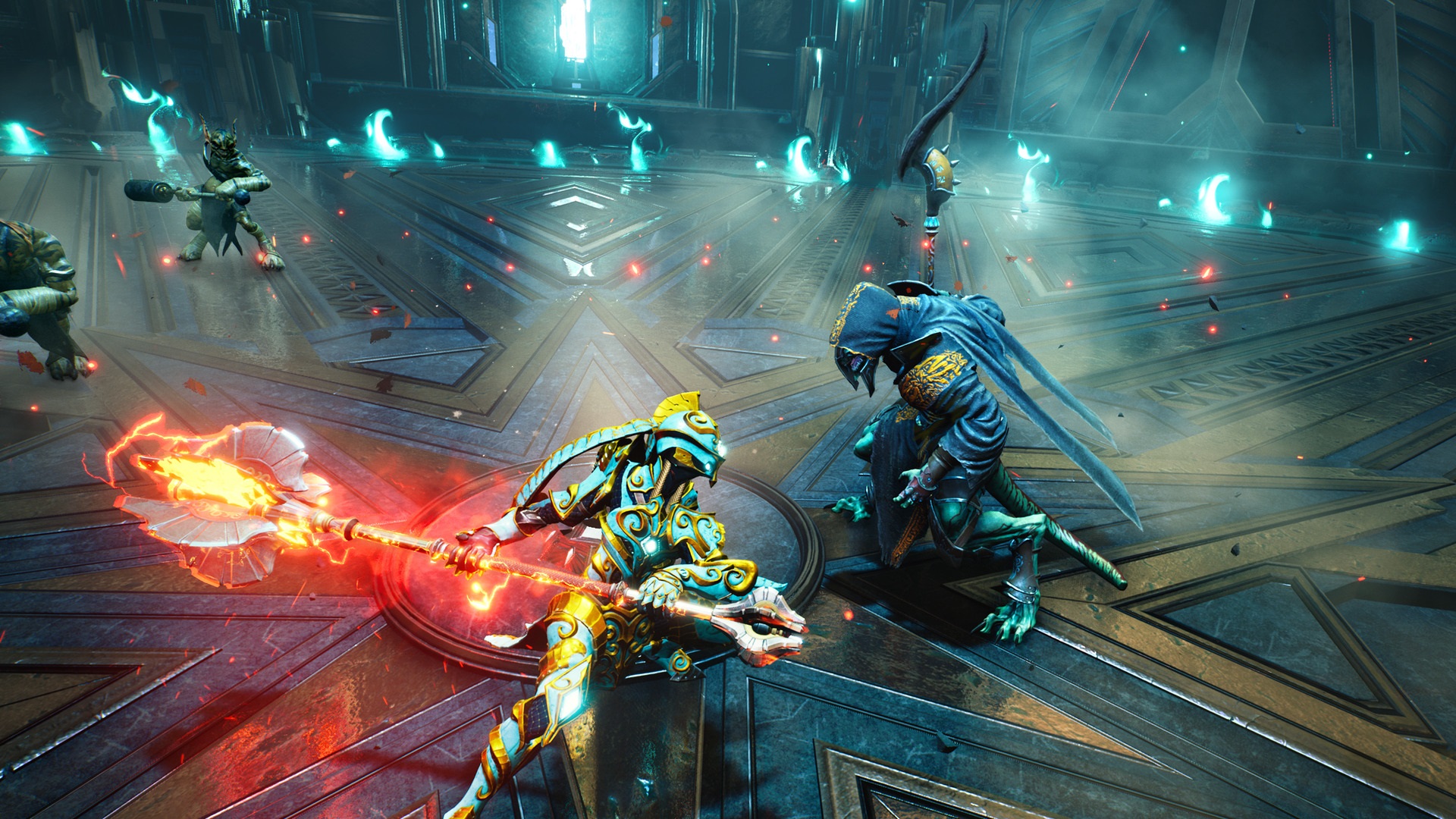 We all know about looter shooters like Destiny and Borderlands, but looter-slasher is a foreign enough concept to where Counterplay Games describes Godfall as a first of its kind. Where a looter-shooter combines elements of loot-based games with a shooter, Godfall pairs loot-based games with hack-and-slash titles like God of War.

As a looter, Godfall checks all the boxes. Players will travel Earth, Water, Air and Fire realms collecting continuously better loot. Each world is fun to explore and the loot is varied enough to keep players in for the long haul. It’s not an overwhelming amount of loot like in, say, Borderlands, but it’s far more varied and interesting than in some other looting games. In addition to loot, players will also spend time collecting resources for upgrades and to forge the best loot, Valorplates. God-like armor, these Zodiac-inspired suits of armor provide unique play styles and Archon abilities. There are twelve total and all can be unlocked by collecting resources found in the world.

As a hack-and-slash game, Godfall borrows some from God of War. Players combine a combination of light and heavy attacks to form combos, dodges to clear enemy attacks, and a shield to block or parry incoming attacks. Also like God of War, a radial indicator around your character telegraphs when attacks are coming off-screen. It’s helpful but can be a tad unreliable. The arrows are small, and considering the amount of red particle effects that can be on the screen at once, it’s easy to miss something and take damage. 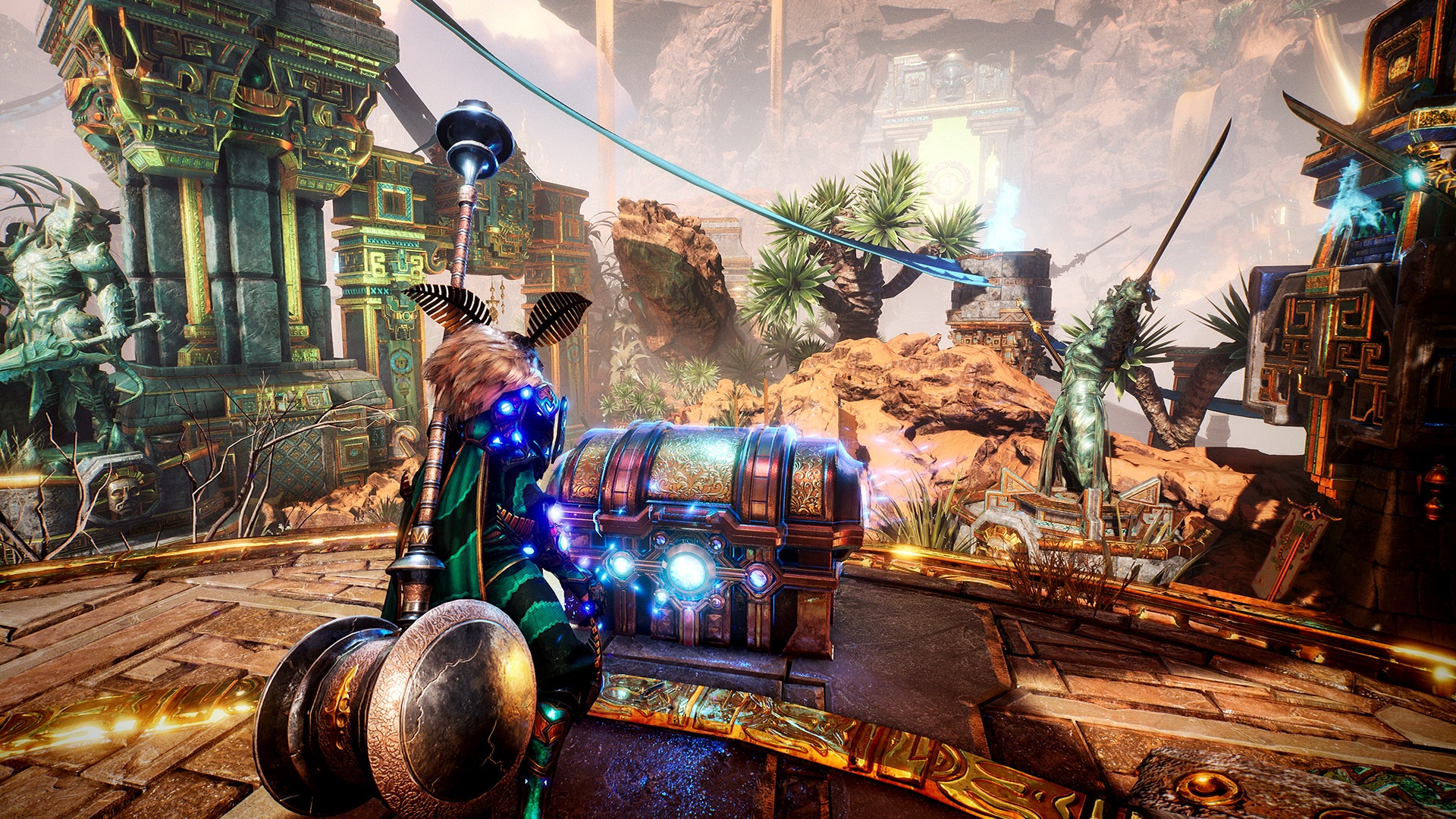 What separates Godfall from God of War is its weapon system. There are five different weapon classes in the game (longsword, polearms, warhammers, greatswords and dual blades), and each provides a different way to play and master combat. Longswords are the everyman’s weapon, providing solid attack speed, range,and damage. Polearms deliver excellent reach. Warhammers are slow but provide damage over an area. Greatswords provide powerful sweeping swings. Finally, dual blades are the fastest weapons, but the shortest range. There’s a solid amount of variety in combat thanks to the different weapons.

That sense of variety mostly extends to the world. Each of the four realms is pleasantly different enough to look at and explore. Though not completely open, players can still spend time wandering about, hunting resources and leveling up. There’s a good amount of enemy types, but it’s common to see the same ones pop up a lot. There’s always a spear guy, a shield-wielding guy or bowman. They may look different in every realm, but they function the same. More worrisome is the mission variety. While the story missions feature a strong amount of variety, all extra activities fall into Hunt type quests that don’t change. If you need to grind for experience, you’ll be hunting the same targets repeatedly. Hopefully, as the story continues, more interesting side quests will pop up.

Despite being a looter, Godfall is a not a live-service game. It’s primarily meant to be played single player, but the game does support three-player co-op. Godfall, however, always requires an internet connection to play, which can be annoying. It’s great to have co-op options, but why the game needs an internet connection to play solo doesn’t make much sense, especially considering another Gearbox looter title, Borderlands 3, can be played offline. 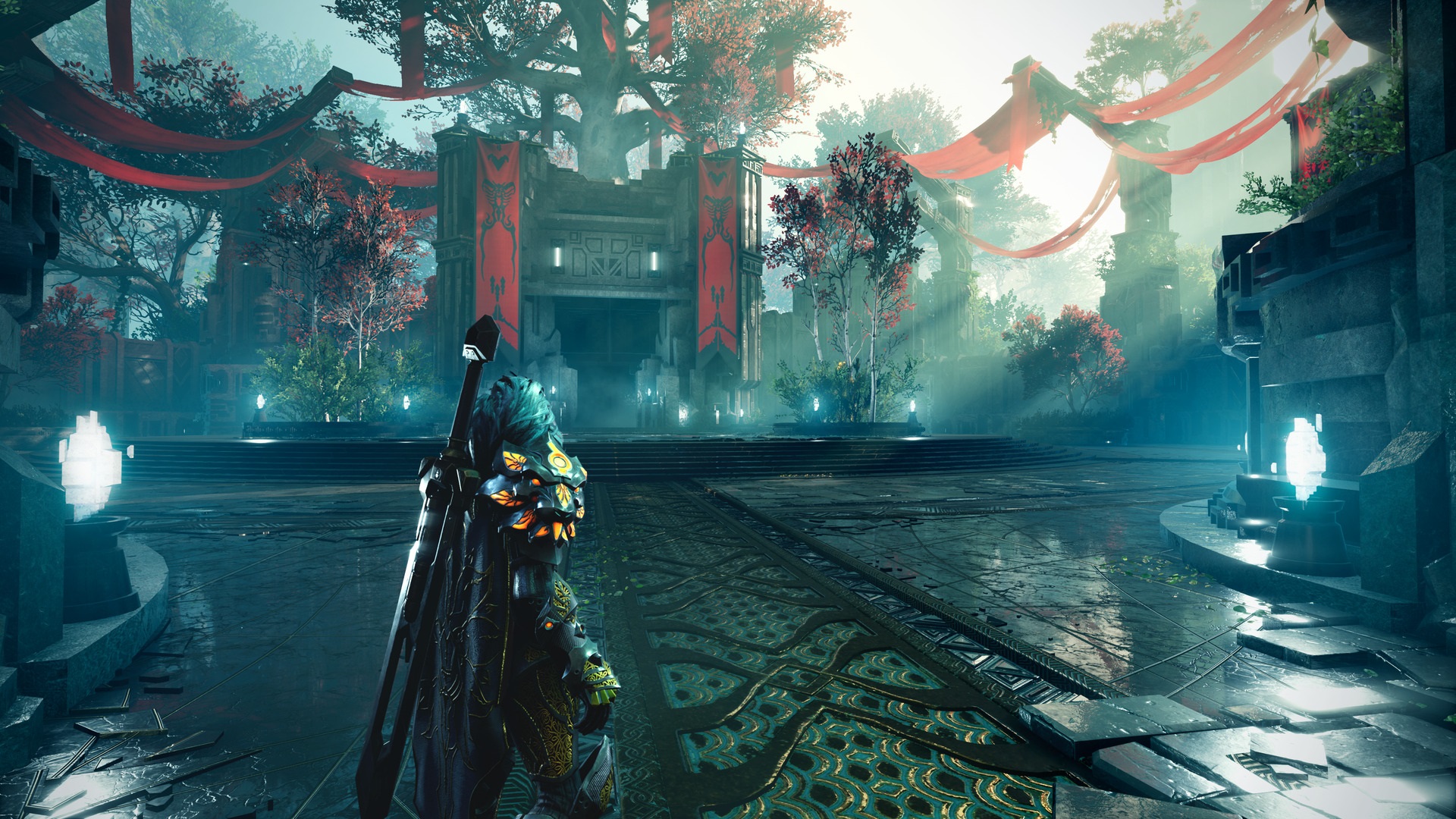 Godfall is shaping up to be an interesting launch title. It’s beautiful to look at and is so far delivering on its looter-slasher premise. The loot is varied enough to keep players hunting, and the combat is fluid and entertaining. All five weapon classes are fun to play with, and the twelve different Valorplates allow each play style to shine. There’s some worry, specifically about the variety of content outside story missions, and it’s annoying a game that can be played solo requires a constant internet connection. Still, Godfall looks to be a good launch title for the PS5.

Be sure to check back soon for our full review. Godfall launches November 12 on PS5 and PC.