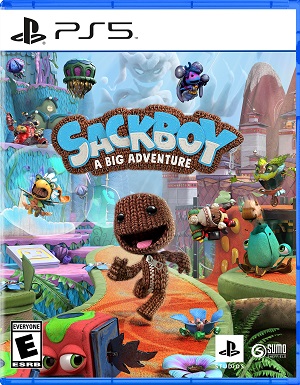 Media Molecule’s fame stems from two things: their excellent creation tools and Sackboy. The adorable champ’s been hopping around since 2008, but his LittleBigPlanet outings have felt overshadowed by the creation tools. Media Molecule has since moved onto Dreams, leaving Sackboy in the hands of Sumo Digital. Now, at the PS5’s launch, we have a new adventure with Sackboy, and this time, he’s the star of the show. Is Sackboy: A Big Adventure a platforming title worthy of the lovable character?

Sackboy: A Big Adventure takes place in the idyllic land of Craftworld. One peaceful day, Sackboy’s home is raided by the menacing Vex, bringer of fear and chaos. He intends on turning Craftworld into a living nightmare and kidnaps Sackboy’s friends to force them to build his Topsy Turver device. Armed with Vex’s plans and an ancient prophecy, Sackboy must rise to put down Vex’s plot. As Sackboy, you’ll travel across five unique worlds and meet a colorful cast of side characters. The plot is relatively simple and filled with cliches, but it works well. Rather than going for shock and awe, the story manages to capture attention thanks to its charming characters, visuals, and voice performances. This is particularly true of Vex. Richard E Grant deliciously chews up every scene Vex is in and it’s simply fantastic to watch how it all unfolds. The story is magnetic even if it’s filled to the brim with classic cliches. In many ways, it just adds to the game’s character.

The game manages to keep up a high level of charm throughout the campaign. In total, you’re looking at around 8-10 hours just running through the campaign. During that time, you’ll visit five distinct worlds in Sackboy’s quest to defeat Vex. Within each of those worlds are an assortment of different levels, shops, co-op missions and challenges to run through. To progress between each world, you’ll need to collect blue Dreamer Orbs. These blue-tinted orbs are hidden throughout the levels and are required to face off against the world’s final boss. 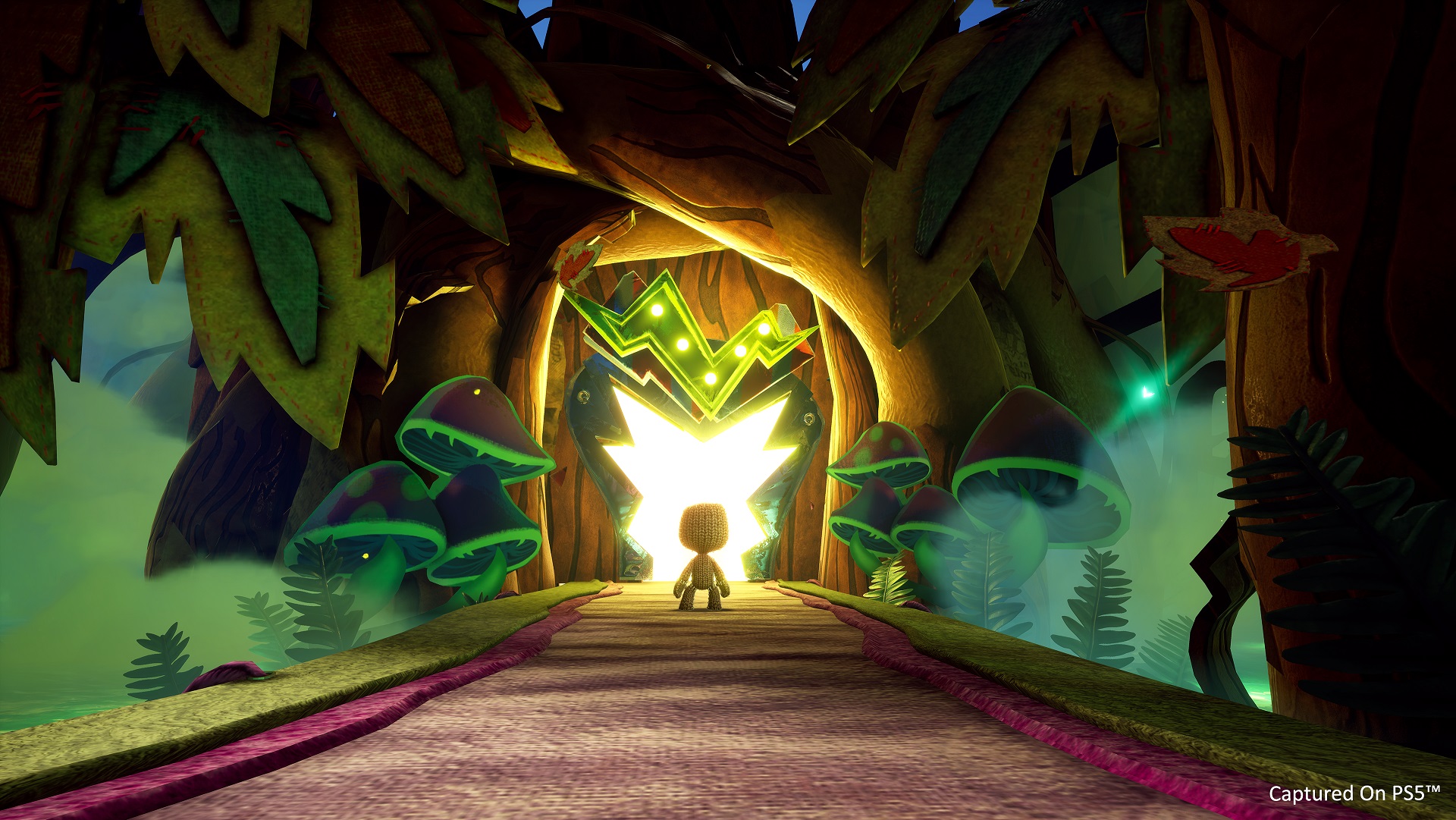 Playing through these levels in search of Dreamer Orbs isn’t that much of a chore when nearly every level is fun and engaging. Sumo Digital has done a solid job distilling the charm of LittleBigPlanet into its own platforming game. The amount of imagination on display is mesmerizing, giving players various scenarios to play through. You’ll go on a deep-sea treasure hunt, survive a wild train ride, save baby monkeys from a monsoon and do so much more throughout Sackboy’s journey. Perhaps the most inventive levels are the ones that deeply ingrain music into their core. These levels use actual music to dictate the level’s flow, timing enemy movement, background scenery, bounce pads and more to the beat. Who knew it would be such a blast to play through an entire level set to Uptown Funk.

Sackboy: A Big Adventure sheds the LittleBigPlanet franchise’s creation tools to deliver a pure platforming experience. You can still heavily customize your Sackboy, but you won’t be creating any new levels. This also means shedding the 2.5D platforming of the original series in favor of an entirely 3D experience. This has allowed Sumo Digital to address two of LittleBigPlanet’s most significant issues; the finicky switching between three different planes and the floaty platforming. The result is a platformer that plays far more precisely than any previous LittleBigPlanet game.

Sackboy isn’t a difficult game to play through, but the game does throw enough obstacles and tools into the mix to keep platforming entertaining. Levels are designed around different tools and mechanics that open different gameplay opportunities. The grappling hook helps you get over edges but can also be used to grab out-of-reach objects or combined with jump pads to get over a too tall ledge. Hover boots not only get you across long distances but also include gloves that fire lasers, giving Sackboy a ranged way to deal with enemies. Orange Gloop allows you to walk on walls or the roofs, but you lose the ability to jump. There’s a lot of fun stuff to uncover, but, unfortunately, it’s all level specific. You won’t be able to mix and match different items across different levels. Meanwhile, for those wanting more difficulty, there are lots of time trials to participate in that’ll test your skills. 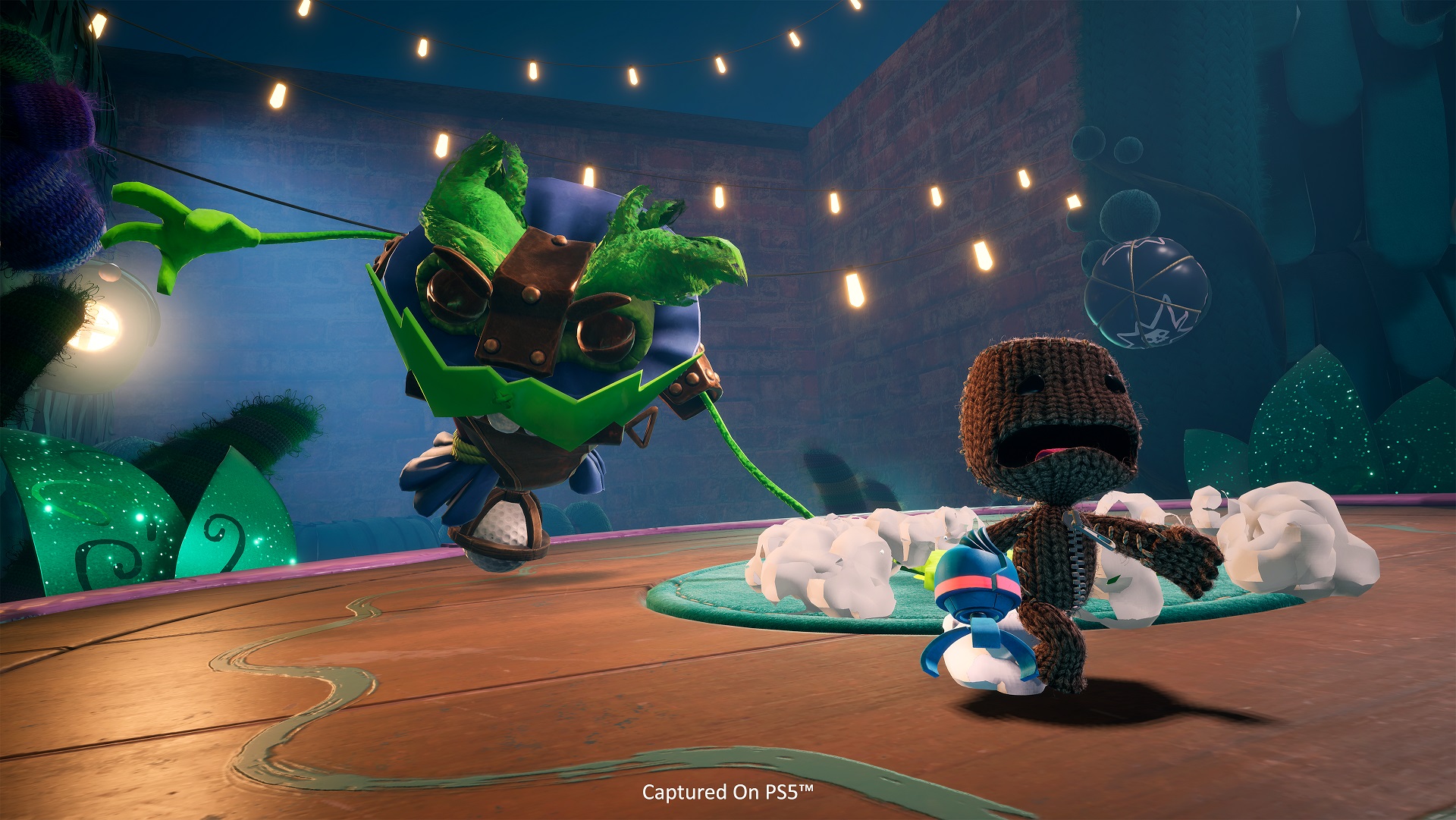 Sackboy: A Big Adventure can be played solo, but it’s clear Sumo Digital intended the game to be played co-op. All of the levels are designed to be large enough to accommodate up to four players and many of them even have items that can only be collected with extra people (at least if you don’t force a death and respawn at the checkpoint). Even more evidence of this is that there are specific missions that can only be played through co-op. Playing the game with friends and family is fun, but the game makes it a pain by only including couch co-op. At the 11th hour, Sumo Digital announced that online co-op would be delayed to sometime later this year. It’s a significant oversight, particularly given the ongoing pandemic.

Sackboy: A Big Adventure’s gameplay is a vast improvement over LittleBigPlanet. The transition to 3D is a successful venture that still manages to keep all the original franchise’s charm. There are more tools to play around with, more challenges to engage with and dozens of levels to platform through. It’s just unfortunate that a critical aspect of the experience, co-op, was hampered by a delay. 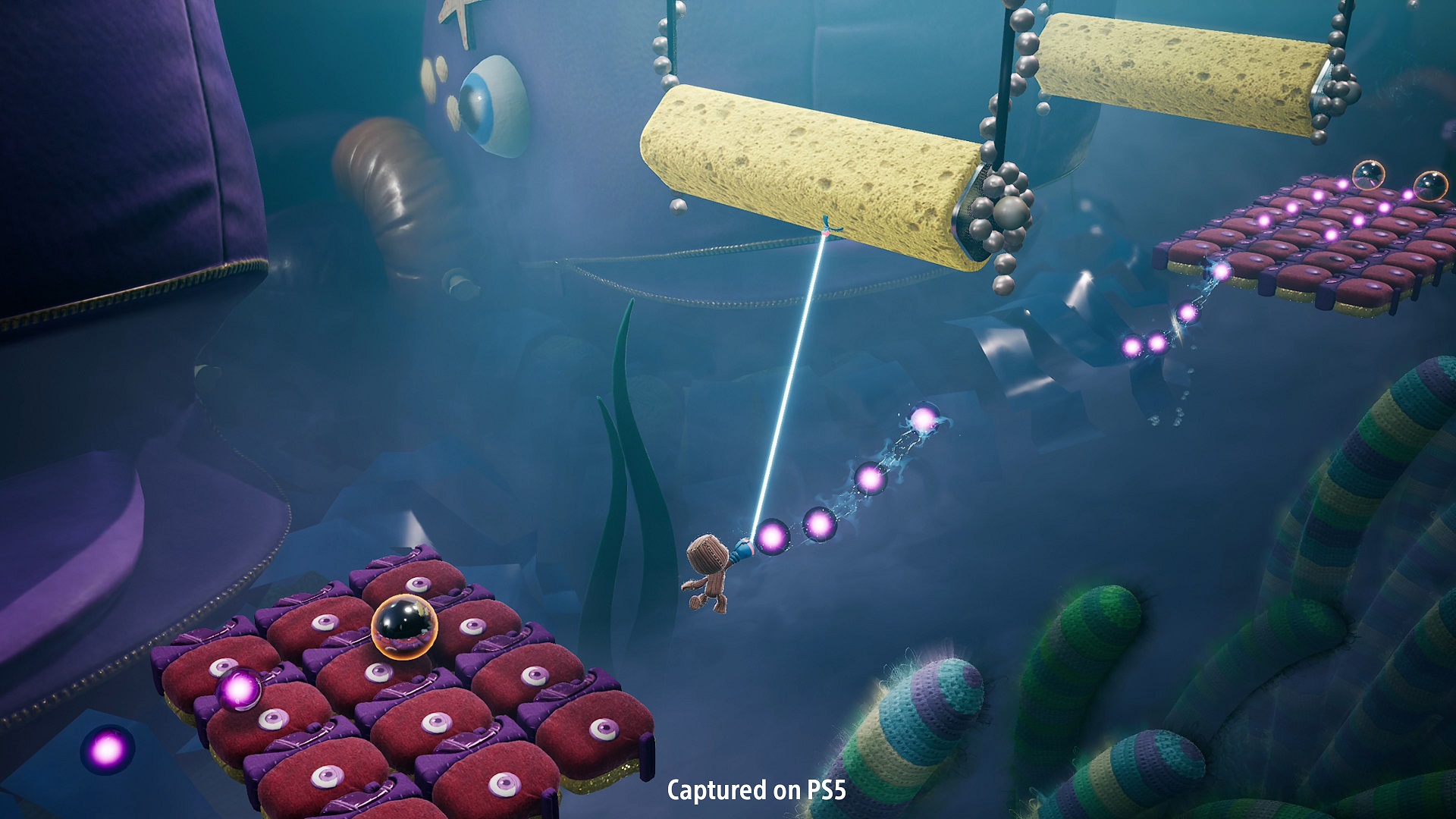 Sackboy: A Big Adventure is a launch title for PS5, and as such, you’d expect it to be a showcase for the new hardware. Thankfully, Sumo Digital has delivered a visually-stunning game that runs smoothly throughout. The textures are vibrant and beautifully detailed, Sackboy’s fabric has never looked so real and the art style looks so clean when playing on PS5. That’s not to say that the PS4 version doesn’t look bad. The game still looks and runs beautifully on Sony’s current-gen machine, but if you have a PS5, this is the version to get.

The PS5 version also benefits heavily from its SSD technology and DualSense. Load times are noticeable since the game uses them, but they’re typically gone in just a few seconds. It’s a lot easier to get in and enjoy the game on PS5 versus PS4. The DualSense also does a good job immersing players into Sackboy’s world. You can feel the tension as Sackboy grabs and pulls objects, feel his feet leaving a bouncing pad and even a train going off the tracks. It’s an impressive use of the technology.

Rounding out the performance is the stellar audio. Though Sackboy may be silent, the world around him isn’t. All the characters are injected with plenty of charm thanks to the superb voice cast. The licensed tracks that populate certain levels are integrated well and you can’t help but hum along to the beat. Finally, just the base levels themselves are populated by great music. Altogether, the visuals, technology and audio create a fantastic presentation. 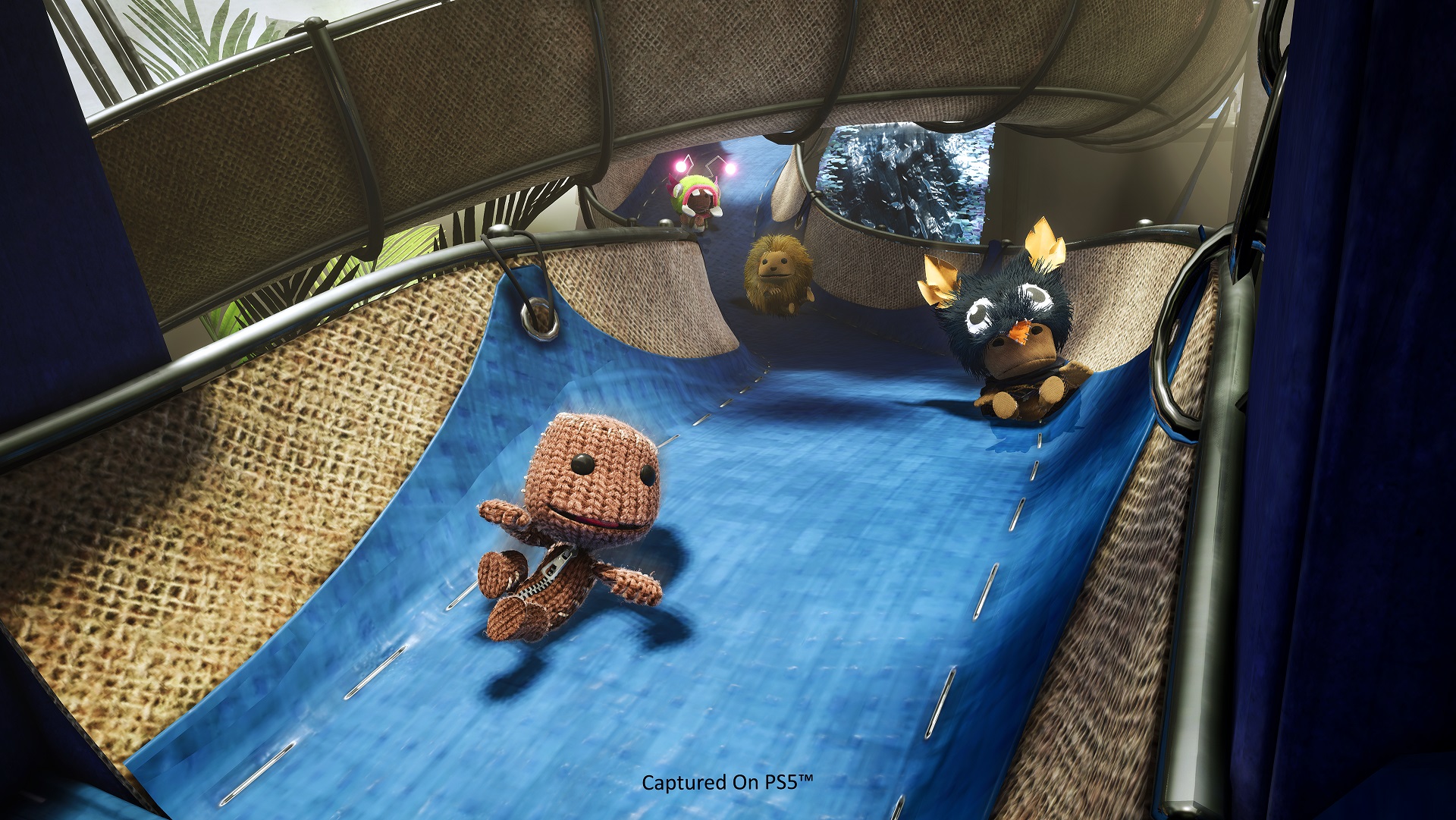 Sackboy’s legacy was always tied to LittleBigPlanet and its creation tools. Media Molecule no doubt created a PlayStation icon, but he always played second fiddle to the tools. That perception is no more thanks to Sackboy: A Big Adventure. Sumo Digital has successfully excised Sackboy from the creation tools and given him his own platforming game. The game is gushing with character and charm thanks to its wide array of imaginative levels. The transition to 3D platforming has allowed for more precise and varied gameplay, providing a solid level of fun for players of all ages. As a PS5 launch title, the game delivers a colorful and detailed presentation, though it remains no slouch on PS4. The story isn’t anything special and chocked to the brim with cliches, but a solid voice cast combined with great level design will keep you playing the entire length. While playable solo, Sackboy is best when played co-op, and unfortunately at launch, co-op options are limited. As a complete experience, though, Sackboy: A Big Adventure is a fun platforming adventure that’ll leave you with a smile on your face.