The human brain is designed for survival but also needs to play.  This puts it in a constant fight with itself, as anyone who’s ever said “Hold my beer and watch this!” can attest to.  Play means wanting to put on a headset to game freely in an open world, while survival says that the body is moving but also standing still and oh god poison, Purge all systems!  Getting one’s VR legs can be more of a problem than it’s worth, so there needs to be clever ways to work around it rather than fight the nausea head-on.  As it turns out, waving your arms like a lunatic is a great way to distract the brain enough that free movement works just fine, which means Stride can focus on smooth-running parkour action.

Stride has been in Early Access since the start of September but so far it’s been an endless runner.  A unique, smart and challenging endless runner, sure, but with just the single game mode.  Push forward on either of the two sticks on the VR controller of choice to walk and swing your arms to run.  Seeing as you always want just a little more speed that means near-constant running, plus getting in a nice energetic round of gaming as a bonus.  The action is mostly parkour, jumping from rooftop to ledge, wall-running when the gap is too large and sliding through low passages, and grabbing on to ledges when the jump is just a little farther than comfortable.  Sometimes a bot will appear to slow you down, shooting you off the rooftop unless you shoot back, and that’s a problem seeing as there’s a creeping blackness constantly destroying the level behind you.  Run, jump, grab, shoot and even occasionally ride a zip line or grappling line to stay alive as long as possible, always keeping an eye out for the perfect flow from one set-piece to the next.  It’s a lot of fun but that endless runner was the only option available, until today’s update added a pair of modes to give Stride’s mechanics a good workout. 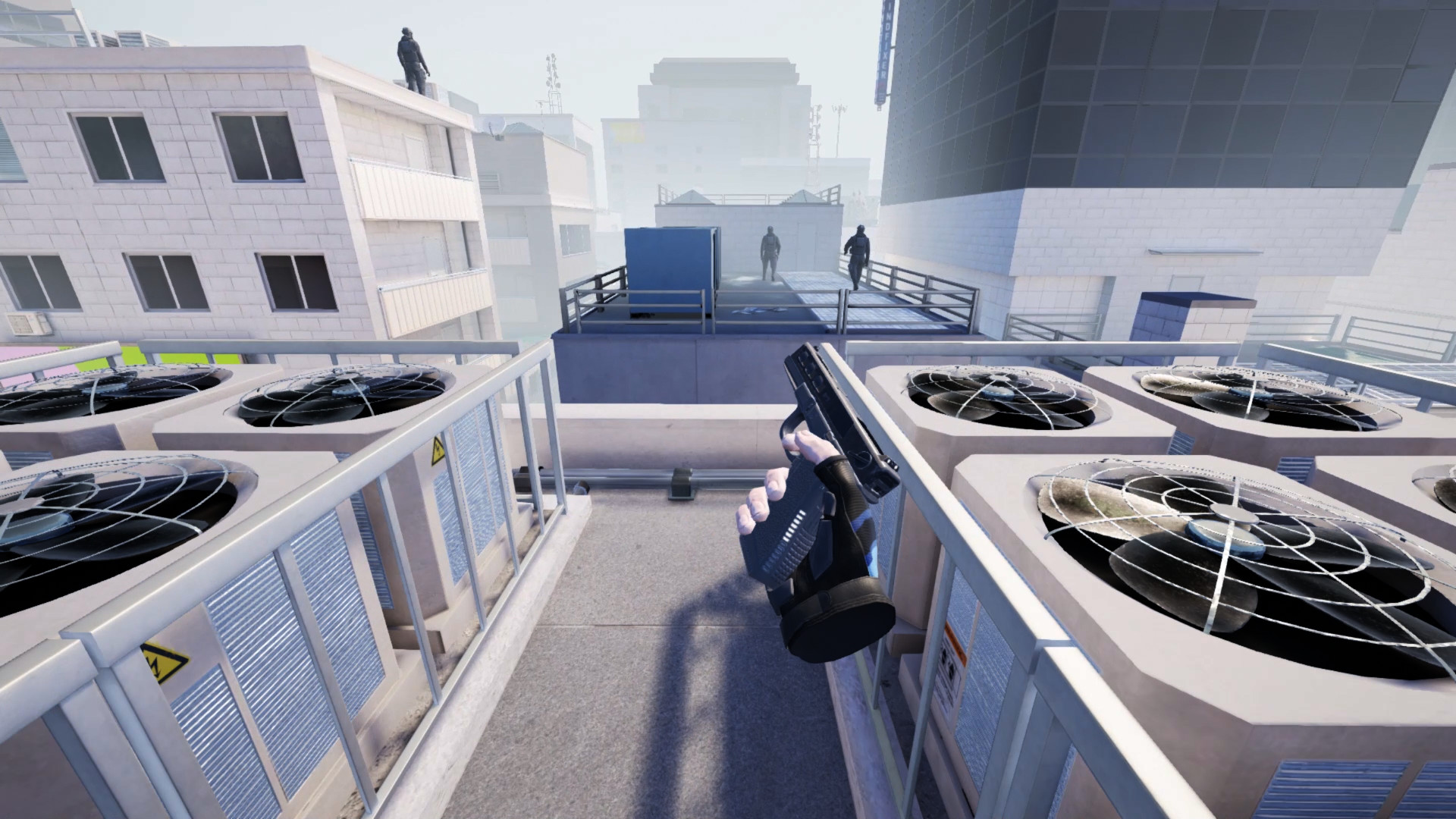 The first new mode is a time trial. The endless runner was randomly generated but time trial is hand-built levels with a beginning and end, plus leaderboards so you can discover that a great run was actually kinda decent-ish, maybe.  The other new mode, though, is something completely different, an open-world arena with multiple objectives to chase after.  The levels in Endless and Time Trial are videogame-y, designed to be great places to run through even if they don’t make a whole lot of architectural sense, while Arena has a good number of new props that make it feel like running across the rooftops of actual buildings.  There are three objectives to chase after, in the form of collecting all the packages, creating chains of moves and killing all the roaming guards.  If that sounds like a lot then the pre-game menu lets you trim it down to one or two objectives of your choice, so if rooftop gunplay or a pacifist collection run is your focus then that’s perfectly fine.

With the three main modes released that puts Stride closer to its final version, with the last addition being the upcoming Story mode.  What’s there now though is a lot of fun and incredibly playable, while also being as challenging as you feel like making it.  The dream of free-roaming VR has been a difficult one to get right, with a barrier created by human instinct that can be unpleasant to overcome, but Stride’s running motion all but negates the biologic response.  It’s probably best not to have other people watch you play, but otherwise it’s a great run through a rooftop playground in search of the perfect flow.