It’s hard to know where a cube needs to go but there’s no question it’s not a simple road.  The path stretches ahead forever twisting in geometric pulses and littered with constructs that, while lovely and scenic, are also remarkably good at floating right into the path of the golden square boosters that mark progress to the next new zone.  It doesn’t take long to collect enough to transition to a new area but progress is only part of the journey, so maybe there’s time to amble through the shifting abstract landscapes and soak up the motion and music.  Besides, it’s not like there’s a way to visit each world more than once.

Endlight is an unquestionably unique experience/game and the basic setup is that you’re a cube-like construct floating forward through a near-endless succession of levels with the goal being to collect a certain number of gates before automatically zapping to the next area.  Sometimes the world is restricted inside a tunnel, other levels are wide open with debris floating everywhere and every once in a while someone shows up for a nice chat using a series of  massive text-panels floating into view.  No matter where you end up, though, Endlight is chaotically beautiful, especially when the levels make you hold on for dear life. 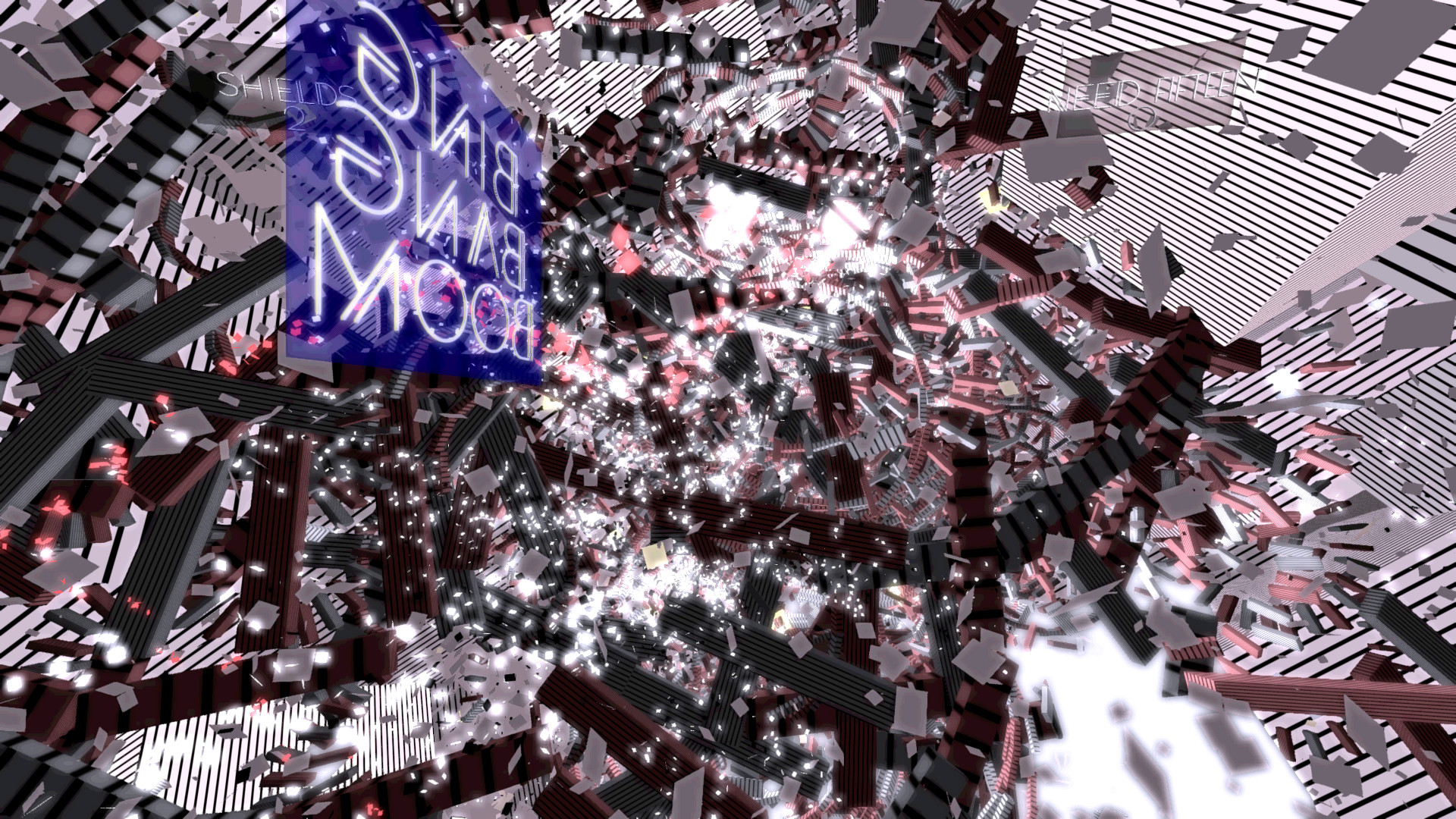 The cube is tough and can bash through the scenery a good number of times, but it’s best not to rely on its resilience too much.  The shield counter can drop alarmingly fast, especially when you’ve floated right into the middle of what would be a nicely intricate tangle when viewed from a distance but is now too dense to navigate through.  The gates give a helpful moment of invincibility, though, so flying through one sitting directly in front of a wall can be a satisfyingly kinetic way to bull open a new path.  Eventually new types of blocks show up that are much less forgiving, with the “sour” red blocks in particular being a one-hit kill, while blue blocks do no damage but bounce you around unpredictably.  Thankfully Endlight is fairly forgiving and you get plenty of chances to restart a failed level.  Plenty is less than infinite, however, and the current setup has it that failing too many times earns the message “Let’s never speak of this again” and a warp to the next area.

It will be interesting to see how that plays out in the full version because the biggest quirk of all in Endlight is that you can only play it once.  Not a single sitting, of course, but once a level is complete it’s not coming back and when the game is over it’s done for good.  Counteracting this one-and-done system is that Endlight will have a huge number of levels, shipping with 100 on release and the plan being to give free updates of another 25 every two months for three years.  When it’s done Endlight will clock in at over 600 levels total (there’s some weirdness with the math, admitted), which makes losing a level here and there a little more acceptable.  Besides, the point of the game isn’t a win/lose condition but rather to float through endless patterns made from all the cubes a screen can hold. 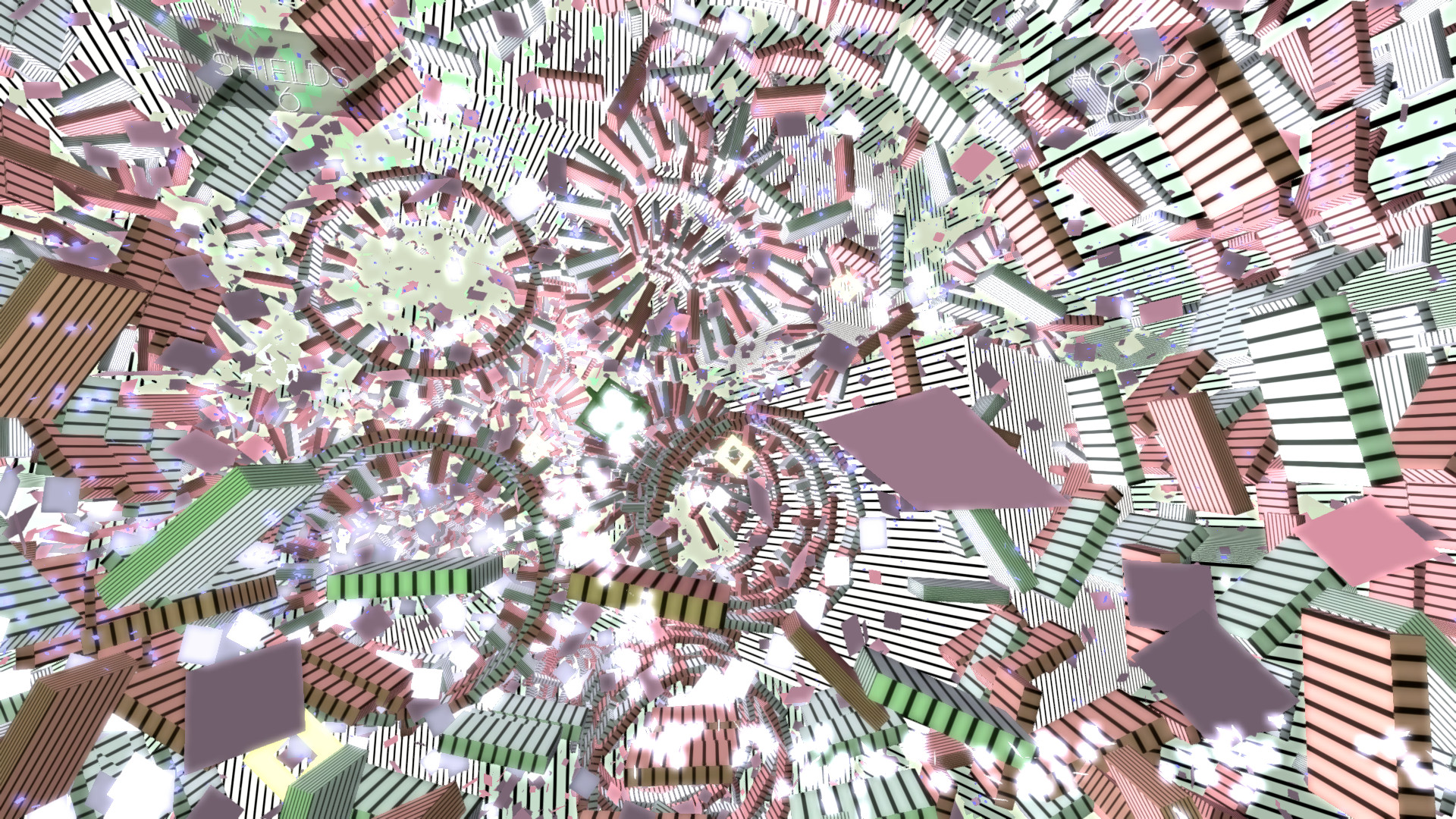 All of this is a lot of words for something you can find out for yourself, thanks to an exclusive demo that’s only available at the link below (and to the left) unless someone goes to the trouble of hosting it elsewhere.  One of the advantages of having lots of levels is that sites can have unique demos, like the Alpha Beta Gamer one posted the other day.  Grab it, play it and let Endlight gently bludgeon your eyes with thirteen levels of high-intensity low-stakes flight through orchestrated cubic chaos.

The exclusively-exclusive Hardcore Gamer Endlight demo can be found here.  Have fun and enjoy the ride while it lasts!