Some of the flashiest setups on the market come from NZXT. The company specializes is making efficient computer cases, motherboards and many more components. The Kraken AIO coolers have been some of the best out there for some time. One thing that has lacked on the Kraken AIO coolers have been RGB options that are tied specifically to the fans. NZXT has now released the Kraken X-3 RGB in three different versions with a few updates to help in other places. This AIO cooler ultimately creates a better vibe for any computer setup.

The cooling option and design for any one of the Kraken X-3 RGB maintains the same as the non-RGB versions that were previously released. You can expect the NZXT RGB pump that features the NZXT logo and illuminated ring. Users are now able to rotate the top of the pump by 30 degrees and it can also be installed in any direction. This will help with users that have RAM or something else that may hinder the hose orientation that leads to the radiator. The power adapter on this pump features a different connection and there’s also a USB-C connection that will plug into the motherboard. The unit will come with the proper bracket orientation based on either an AMD or Intel processor, so compatibility will not be an issue. The pump also comes with thermal compound pre-installed.

Installation is straightforward with the Kraken X-3 RGB. NZXT provided the X73 for review, which includes the larger radiator with three 360mm fans for the best cooling option. My setup included the NZXT h710i PC case, along with an Intel i7-8700. The setup also includes a EVGA NVIDIA GTX 1080ti SC Hybrid, which also has its own radiator attached to the card. The h710i PC case already includes three front fans for optimal airflow, so the radiator for the Kraken X-3 RGB was mounted in the allocated area at the top of the case where the radiator is housed under the top cover and the fans are mounted below this. Installation was easy, although no instructions were provided in the box. The need for a RGB controller is a requirement to utilize this setup, otherwise the fans will work but there will be no RGB options. This setup is compatible with any case that can fit it and includes a RGB controller for lighting. 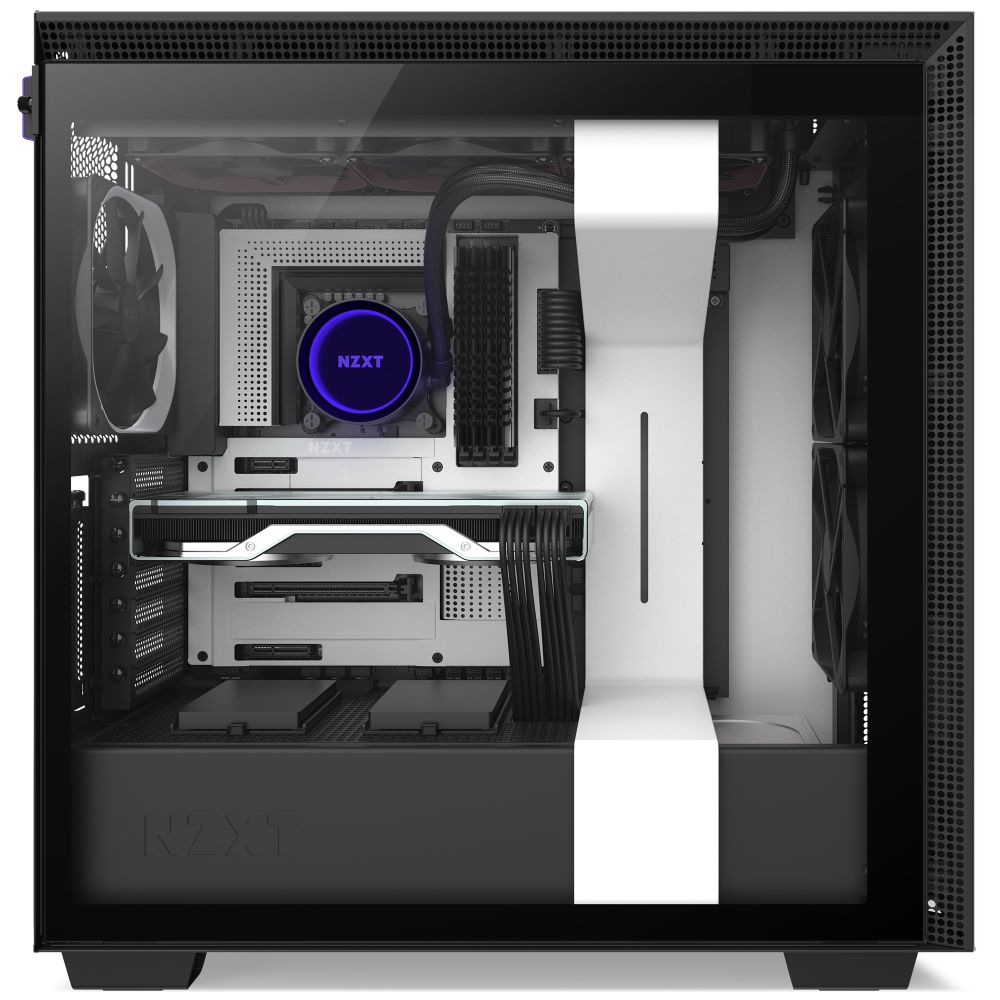 This radiator on the X-3 RGB sees Aer P Radiator Fans that featured a chamfered intake and fluid dynamic bearings. A new winglet-tip fan design produces optimum air flow. What this means is a cooling solution that you can barely hear, even with the performance option running in the NZXT CAM software. This also means reliability and no need to worry about the fans ever going out. Getting to the main focus of the X-3 RGB and that’s the RGB fans. Each fan offers a wide and bright color solution around the exterior of each one that clearly lights up the entire case. Colors and themes can be customized via the NZXT CAM software and now there’s a profile sync option. Any NZXT enabled device can switch to a different cooling and color option when different games are launched. You can even set the lighting to go off at certain times so you can sleep.

While the review unit that was provided was the X73, it’s also available in the X53 and X63. These two have a smaller radiator with smaller fans. The actual cooling netted excellent results in testing of the X73 version. In comparison, I previously had the Kraken Z73 and that offers cooling that is hard to match. At idle, the X73 RGB would maintain between 35-40 degrees, but generally closer to 35. This is with a 102.5 BLK increase. The Z73 would stay closer to 30 at idle. In gaming conditions, I tried out Destiny 2, A Total War Saga: TROY, Doom Eternal, Killing Floor 2 and Remnant: From the Ashes. I tried to stress TROY at 1080p and focus on CPU usage, but any of these games even at 1440p or 4K always stayed between 45-50 degrees and rarely went above 50. This actually is an improvement over the Z73 I had in there as it usually sits around 55 with sometimes hitting 60. I could imagine this hitting 60-65 with 100% usage or a higher overclock with a newer processor. This was tested with the Performance Profile in CAM. 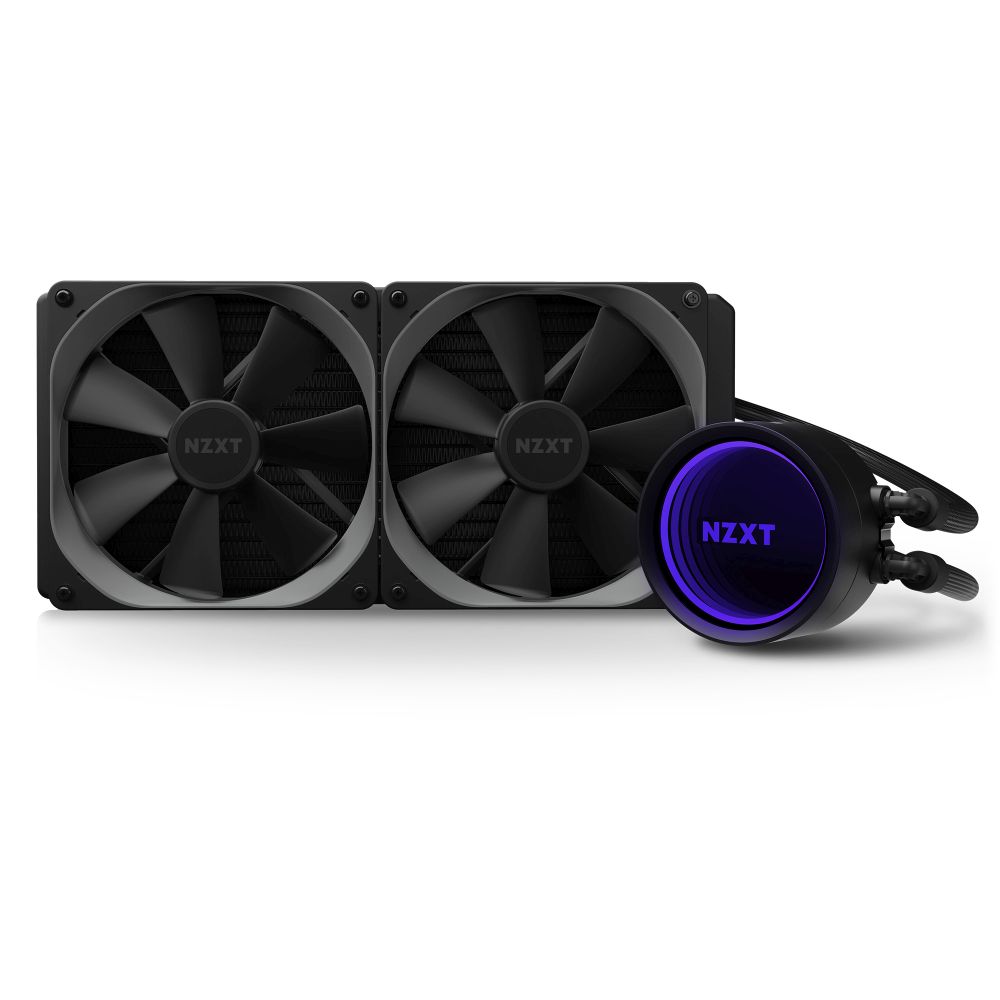 The Kraken X-3 RGB AIO Cooler does a stellar job as a cooling solution while adding excellent vibrancy to your rig that’s customizable. The setup is easy to install, but I wish instructions were included in the box. A RGB controller is also required to make these light up, but NZXT has these available separately. The radiator and fans are quiet even if they are cranked for maximum cooling. The X53 RGB (240mm) starts at $159.99 and the X63 RGB (280mm) jumps to $179.99. The X73 RGB (360mm), which was the tested unit, sees a modest bump to $219.99. The later seems more on the high side so if the lesser cooling options are sufficient, they seem like a better buy. I’m still partial to the Z73 with customizable LCD display on the pump, so I wouldn’t recommend going after this if you already have that. Ultimately, there’s a proper option of the X-3 RGB for everyone looking to spruce up their rig’s life.