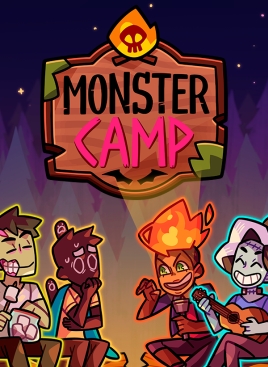 Just under five years ago, I began my journey with Hardcore Gamer, joining as a Staff Writer. Since I wasn’t exactly in a position to immediately demand the most high-profile games to review at the moment, I decided to begin proving my worth by tackling a game outside of my comfort zone and that no one else would want (although this was late December, so it’s not like there were many pickings anyway). I settled on Sakura Santa, a trashy visual novel that clearly only existed for the purposes of cheap fanservice and lame attempts at romance and humor while you try to awkwardly woo supernatural beings. It was the type of bad game where I immediately knew that I would never want to revisit it ever again. So here we are now, nearly half a decade later, and one of my most anticipated games of this year is Monster Prom 2, a deliberately trashy visual novel about trying to romance various monsters that crosses the line constantly when it comes to its humor. Funny what several years (and a developer actually putting in some effort) can lead to!

A sequel to 2018’s breakout hit, Monster Prom 2: Monster Camp sees you (alone or with up to three friends) heading out to Camp Spooky, hoping to find a summer romance just in time for the meteor shower during the final day of camp. Once again, you have six possible deliberately twenty-something teenage potential love interests to go after. Returning from the first game and its expansion are Damien, the violence-loving, horny-in-several-ways devil, and Calculester, the patchwork robot attempting to understand several aspects of humanity.

Side characters from the first promoted to love interest now include Joy, the witch who finds it difficult to take a break from saving the world, Dahlia, Damien’s buff rival and fellow demon obsessed with conquest and earning whatever badges they can, and Aaravi, the monster slayer constantly wanting to go on quests but is now accompanied a curse known as Hex who would rather just lounge around and eat bagels. And new to the series is Milo, a reaper and influencer who enjoys new trends and has a zest for the pleasures in life, and is honestly the character I immediately fell in love with and thus told myself that I wouldn’t write a review of this game until I was able to successfully land them as my summer romance. 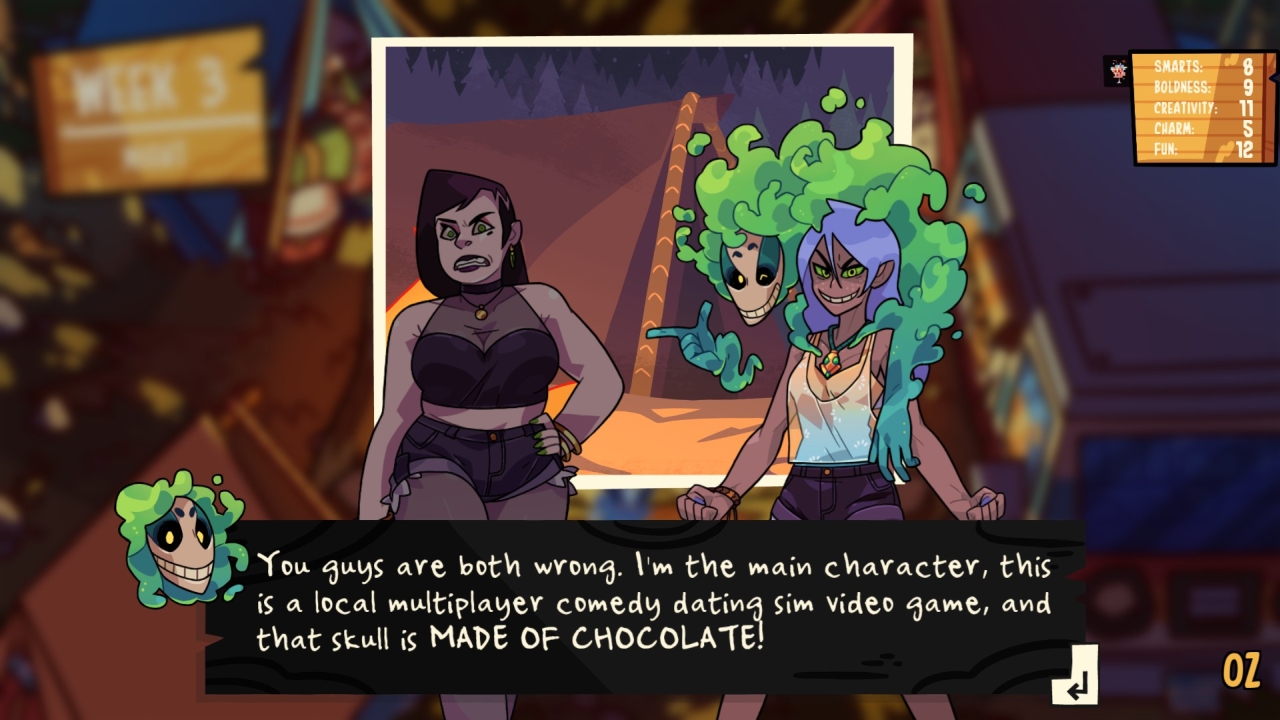 That last part may sound extremely odd if you haven’t checked out the game, I realize, but trust me, Milo’s design and personality has a strong chance of winning you over. Actually, that’s probably the best place to start when it comes to Monster Prom 2’s strengths: the writing. Characters like Milo, a satire of influencers and those obsessed with social media or Aaravi, a character that’s basically a self-aware video game protagonist could have easily wound up as shallow parodies and clichés, but all of them are written with such care and an extraordinary amount of clever dialogue that they easily become lovable, and all of them perfectly play off each other and the equally odd and impressive various side characters. It helps that the terrific visuals (with a few neat art shifts at times) gives them a ton of emotions to display, with a killer soundtrack accompanying them (complete with a New Pornographers song playing over surprisingly elaborate credits).

The scenarios you find yourself in are also well-written, largely because much like the first game, Monster Prom 2 revels in its ability to craft a batch of insane dilemmas and then have you choose between even more insane options when it comes to solving the problems. This is game where you can suggest that the best way to escape from a serial killer is to have all three of your friends hop on your back and ride you like a car or decide that that best way to justify a sudden slaughter of hellions is to create a video of it set to Ariana Grande music and frame it as being empowering. Whether you succeed or fail, the game never fails to commit to the joke, going all in and over the top whenever it can. Really, all you need to know is that one of the reasons this review was so difficult to write is that I had trouble selecting the best screenshots out of the many I had taken as examples of crazy moments that I wanted memorialized. 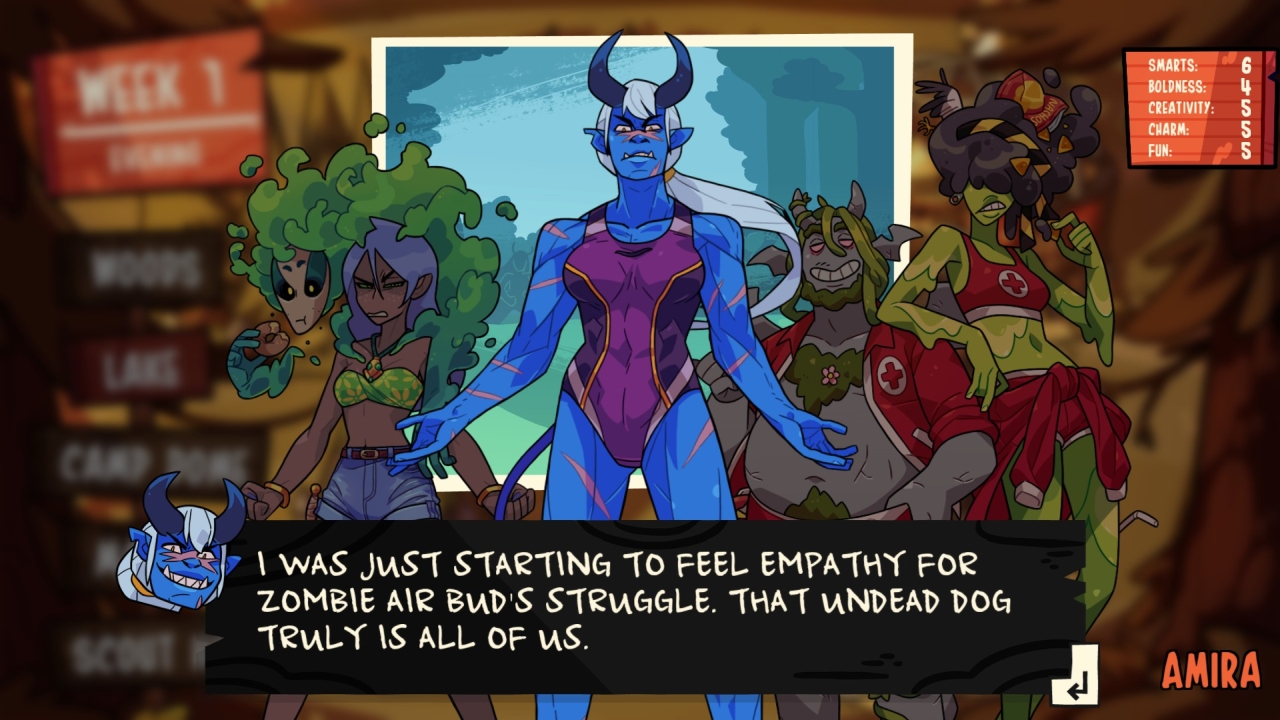 But surprisingly, not only does the game go deep and commit to its jokes for as long as it takes to be funny but before things get dragged out, but it can surprisingly get emotional at times, typically whenever you’re on the path to any story arc or one of the secret endings. One in particular managed to tackle how people change as life goes on and provided hefty character development, all while still maintaining its signature style of of humor and never feeling tonally confused. It was incredible stuff, especially for fans of the previous game. But in case you haven’t played the previous game, Monster Prom 2 nicely has accessibility options that can filter the inclusions of drugs, toilet humor, and yes, even references to the original title for new players (it also lets you switch between “Sexy” and “Super Sexy” for Damien’s bee costume, which alas, I have yet to encounter in-game).

Monster Prom 2 is similar to the original, in that you have a pair of events where you go to one of five areas, gain a stat boost and then select one of two options in order to figure out how you and your current friends get out of a jam. Success is related to the type of option you pick and if your respective stat level is high enough for it (such us having to pick between the “smart” and “bold” option), which rewards or penalties applied to your stats. Then you have a campfire session with all the other campers where you can increase your relationship levels with the others, and repeat for five in-game weeks until the final day, when you select who to take to the meteor shower (or go solo). It’s simple stuff and it works perfectly. 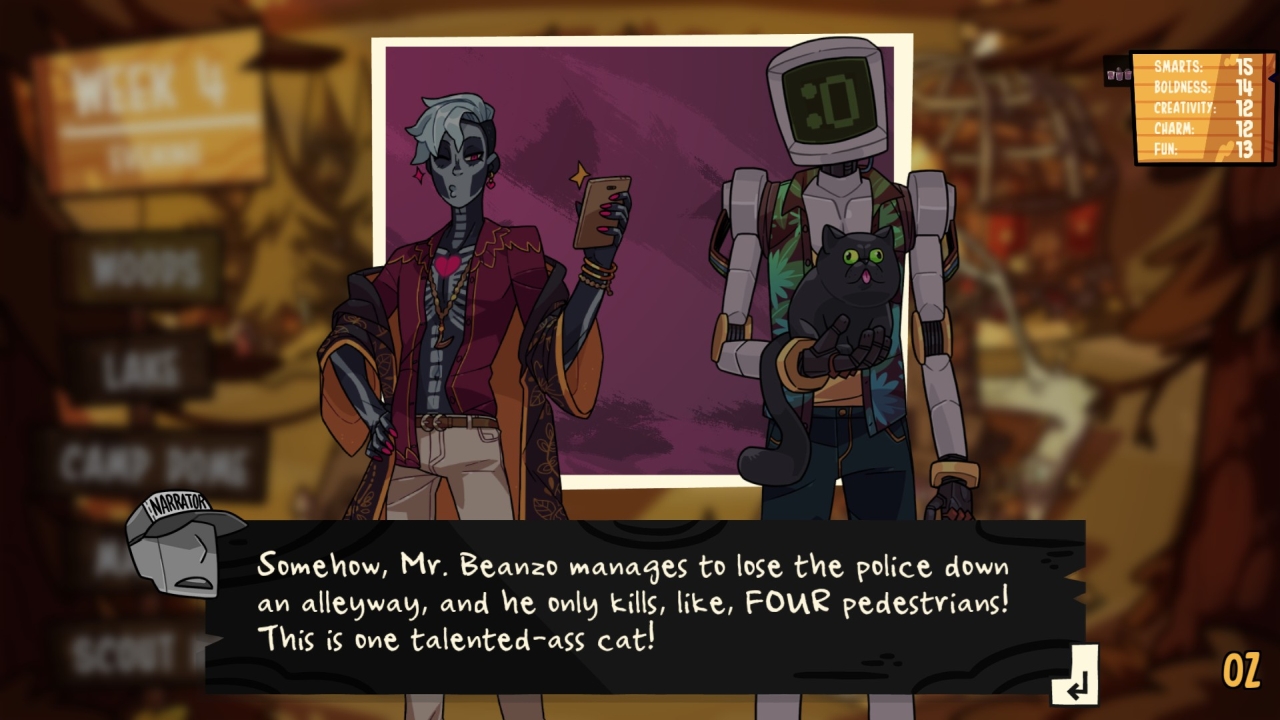 There are new twists in Monster Prom 2, of course. The first is in building your initial character stats, where you now select three objects from a random pool of items framed as what you’d bring to camp, each with certain initial boosts. Not to mention a first impression, which lets you select a response that sparks a conversation with one of the six romance options and starts an increased relationship level with them. But the bigger changes come during the campfire between events. For starters, now there’s a cryptid named Moss Man who, with a few Mad Libs-style responses, can spread dirt that either hinders or increases one’s stats…or even those of other players, adding competitiveness.

The most notable, though, may be the replacement of the shop with Juan, the magical cat that serves as the bartender. Through a variety of options, players select one of many quirky random drinks at a given time, which can have a variety of different effects. Some are straightforward benefits, like providing a massive stat boost or immediately starting a secret ending route, others can hinder you via ways like hiding all of your stats for the rest of the game and others can just get plain wacky, like a “discount” that switches all +1 stat gains to +0.99 or a drink made entirely of bees that changes your name to “Nicolas Cage” for the remainder of the run. You unlock additional drinks after various runs as well, which gives you a further incentive to keep coming back and see where they lead. These may seem like simple changes at first, but they do offer up a nice variety of options to help you towards your desired outcome or if you just want to mess around. 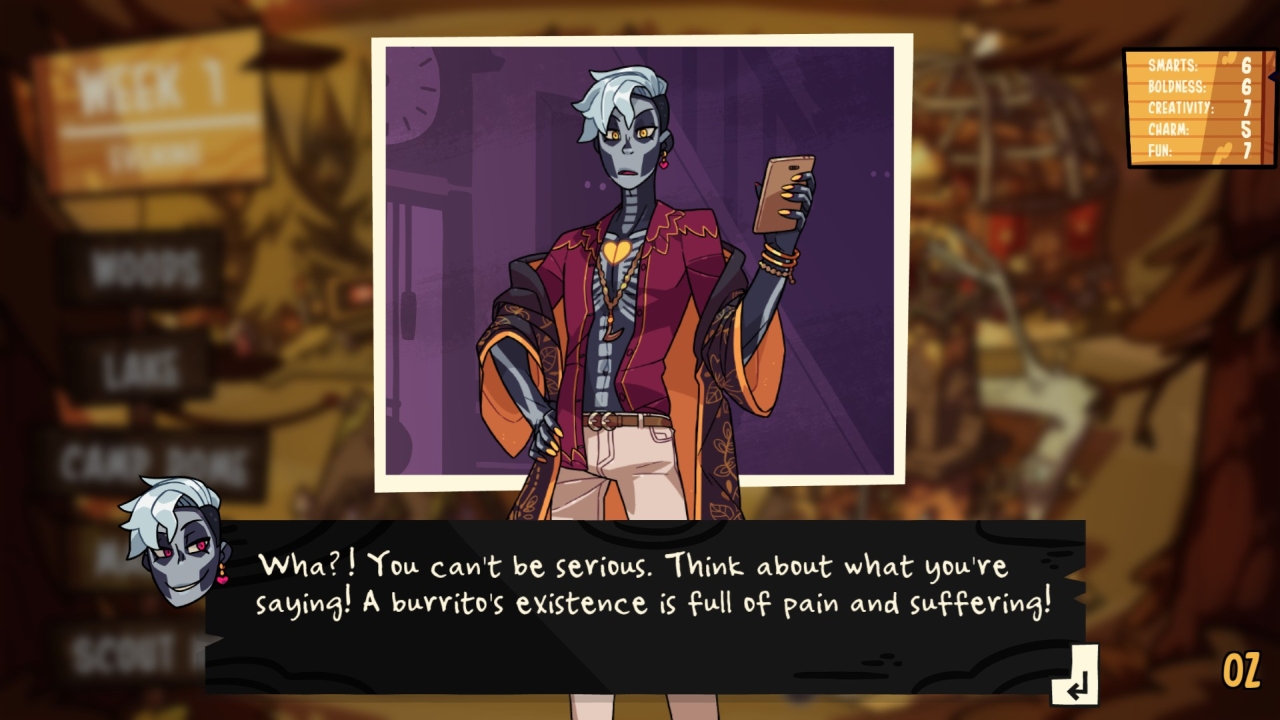 While Monster Prom 2 is still a blast to play solo, thanks to the sheer amount of options to explore and endings to go after, it shines as a party game. The core choices remain the same, but now you have potential rivals to sabotage in various ways…or possibly even romance and gift stat boosts to, with a love log added to the campfire in multiplayer that you can sit at with other players instead of NPCs. Not to mention little bits like having to decide turn orders through additional party games, which can lead to debates about whether Keanu Reeves or Riz Ahmed would make the most news-worthy Batman. But really, the joy comes in how the game goes into full-on Cards Against Humanity (as I predicted before the first game came out), creating a game you can either try to win by hooking up or just opt for choosing the most entertaining options to see how everyone will react. The end result is that you’ll walk away from every game with amusing stories to tell, like how I won the coach and other campers over by inventing gross-flavored scout cookies, while our own James Cunningham ended up killing off the bee population via a failed dating app.

There are a few things holding Monster Prom 2 from true greatness, though, and a touch of reliance on multiplayer is one of them. Mechanics like gossip are best meant for multiplayer, for example. Things also feel more linear this time around, as the character you make a first impression with is the one you seem to get sort of locked into for the rest of the run. It also feels like it’s easier to increase your skill points compared to the first game, potentially reducing the challenge level by a little (although maybe that’s just me being familiar with the gameplay by now). Plus, Monster Prom 2 also feels like maybe it could have waited for a couple more additions before being released. Granted, what’s here is still fun, but it also feels like with a lot still similar to the first game, maybe even a single extra touch could’ve helped further. Oh, and there’s the fact that Milo doesn’t actually have any voice acting yet. Come on, you left the game’s obvious star hanging? 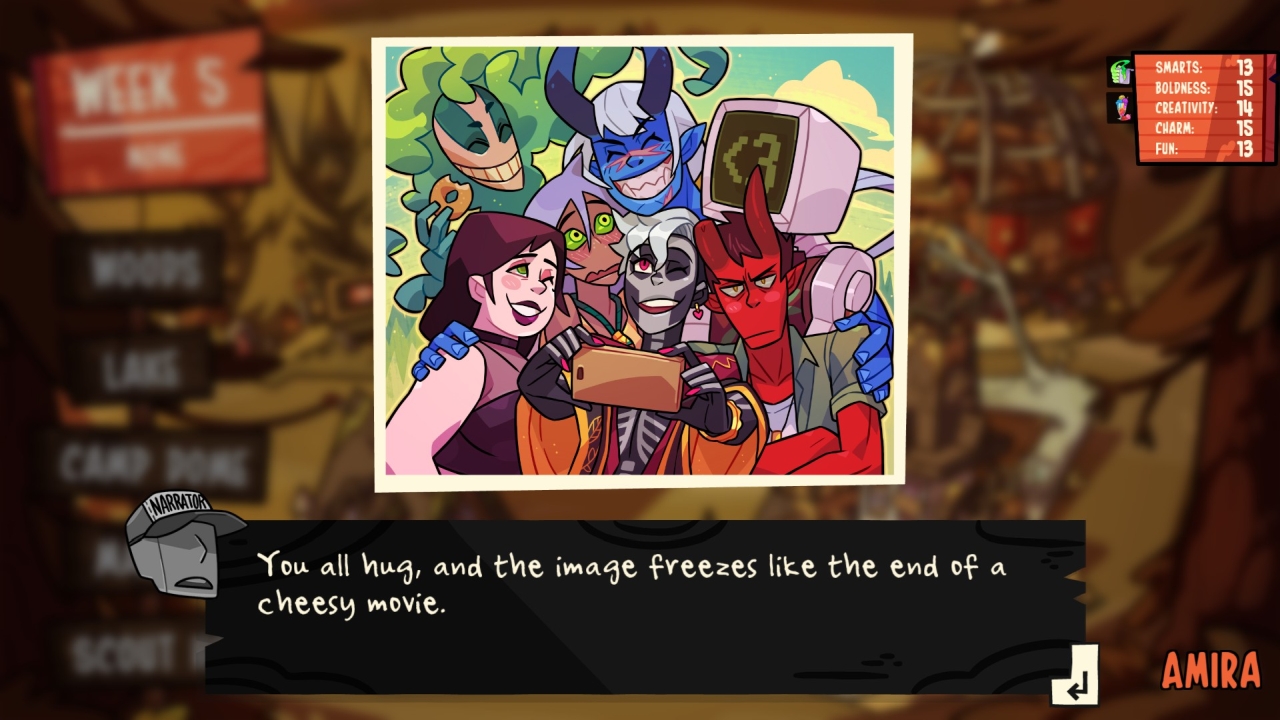 To get straight to the point, Monster Prom 2: Monster Camp is pure fun, plain and simple. And this is all thanks to simple yet highly-addictive gameplay that will have you hunting down every possible event and ending you can, sharp writing that isn’t afraid to get as bonkers as possible and delivers impressive black comedy, a roster of characters that continues the series tradition of giving players the most lovably insane misfits possible, and memorable multiplayer action that deserves to be shared with as many friends as one can gather. Developer Beautiful Glitch has been open about the possible updates and sequels in development, but even as is, this is one bizarre and amazing camping trip that you won’t be forgetting anytime soon.