The original Puyo Puyo Tetris was already a rather excellent game when it released back in 2017. It managed to breath unexpected, and downright addicting, new life into two long-running puzzle series. It was easy to pick up, easy to play and all of the little extras, from characters to music, were downright charming. At the time, it looked like the sort of game a publisher like Sega would opt to keep adding onto. After all, with such a solid base, how could they possibly make a sequel capable of drawing fans away from the original? Well, Sega has indeed made a sequel, and initial-impressions say that Puyo Puyo Tetris 2 has actually managed to make a great idea even better.

First, it must be noted that the core gameplay of both Puyo Puyo and Tetris hasn’t changed at all in Puyo Puyo Tetris 2. The controls are exactly the same, as are the standard game rules. This is good news for fans of both Puyo Puyo Tetris and the core series as it means they won’t have to get used to control layouts or adjustments to points and the like. All the game modes from the first game have returned too, as have all the multiplayer nothing is missing here, and long-term fans won’t have to adjust their playstyles all that much if they don’t want to. That doesn’t mean there’s nothing new to be found in Puyo Puyo Tetris 2 though; in fact there’s plenty of additions to dig into. 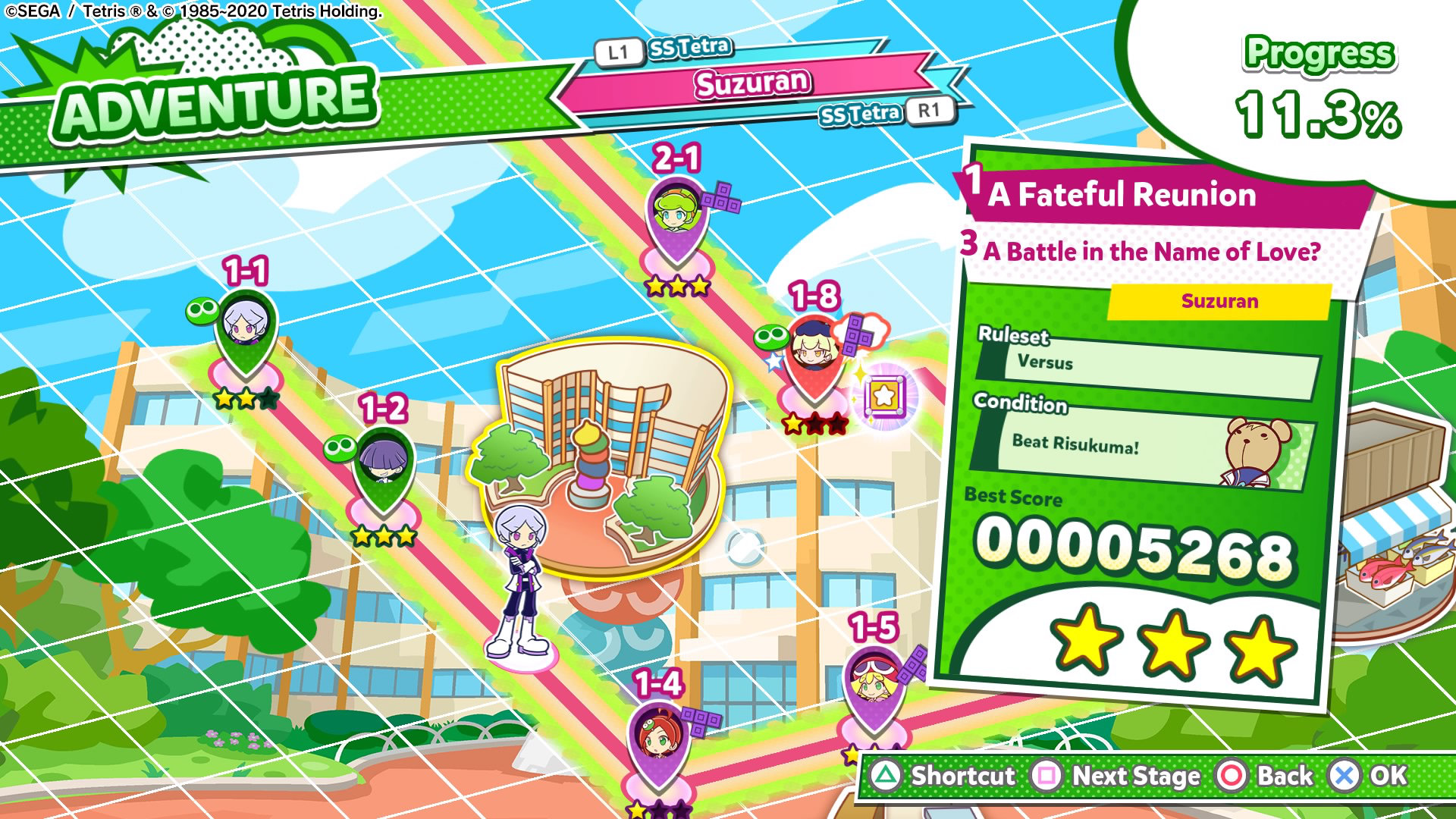 The first mode most players will probably be drawn to is Adventure Mode. It’s here that players will join Ringo and her friends on another quest to save the world from…something. From the outset, it looks like it’ll be a light-hearted romp, just like the last time around, and it serves the same function: giving players reasons to enjoy different Puyo Puyo and Tetris challenges. The major differences here are two-fold: a map and a new game-mode. The map, in keeping with the rest of the game, are all bright and colorful, and they give players a better sense of the worlds Ringo and Tee live in. It’s also just plain more interesting to progress through than the admittedly-bland mission list from the first game.

As for the new game mode, “Skill Battle,” it’s a worthy addition to the Puyo Puyo Tetris roster. Adventure Mode uses Skill Battles as boss modes of a sort and so far they carry the same kind of excitement. In Skill Battle, player form a team of three characters, each of whom has their own special ability. HP Recovery, eliminating lines of Tetriminos and even changing the color of all puyos on the field are possibilities in Skill Battle, and they’re all just as powerful as they sound. Players must use them tactically, though. Abilities are limited by a players MP and opponents have abilities of their own to unleash. The result is a mode where the tide of battle can turn in an instant, transforming otherwise normal Puyo/Tetris fights into something much more intense. 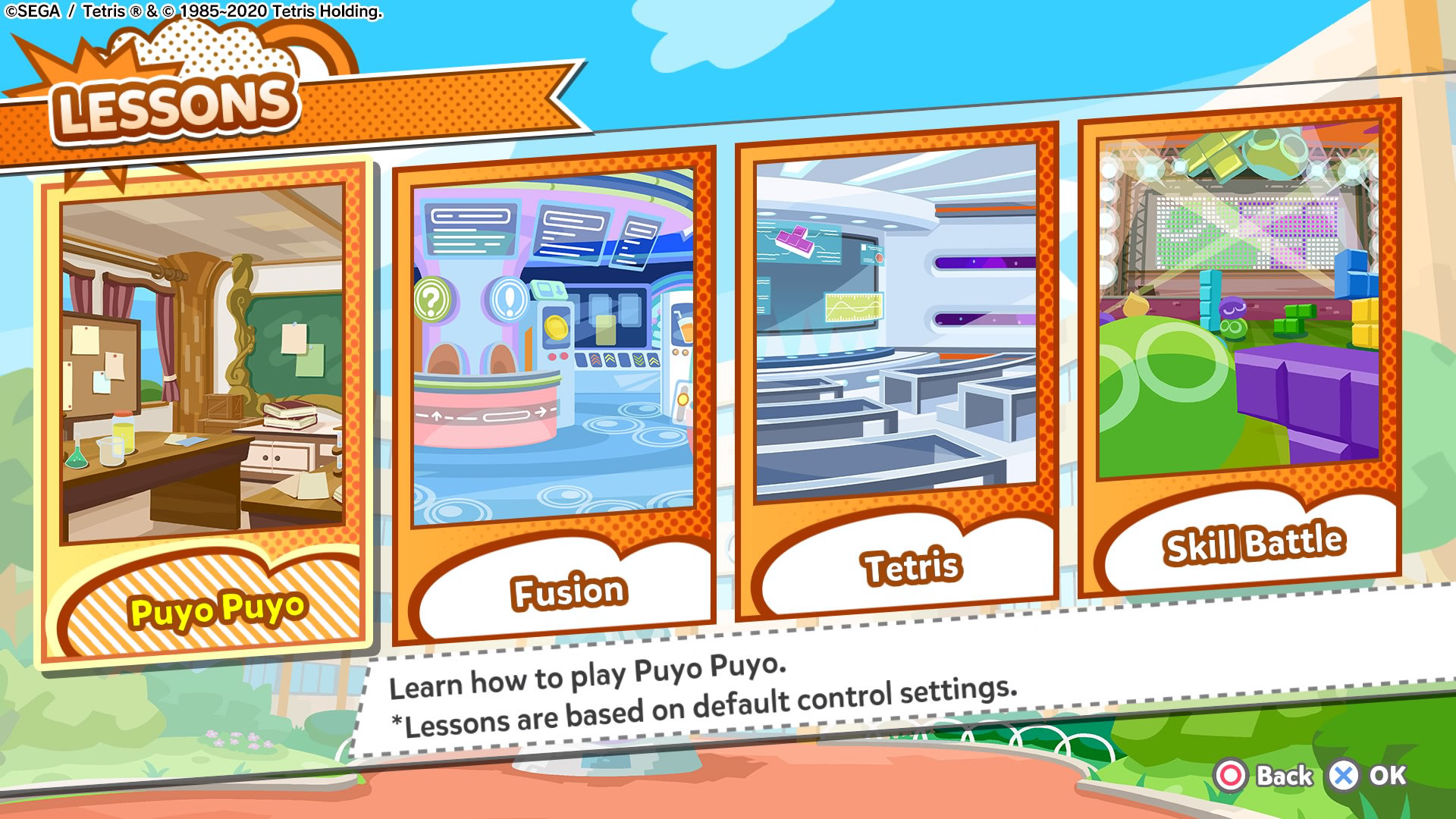 Puyo Puyo Tetris 2 has also made it easier than ever to learn the ropes of both puzzle games thanks to Lesson Mode. This covers everything from the basics to advanced maneuvers and it comes with plenty of practice scenarios to master. Players might not be true master after playing their way through this, but they’ll be much better equipped to take on the extremely-skilled players lurking online. For the Puyo Puyo half of the game, this mode fills in an important gap from the first game.

Beyond all this, Sega has beefed-up Puyo Puyo Tetris 2 with lots of pleasant updates to the overall presentation, accessibility options and player customization options for online play. This next step for both Puyo Puyo and Tetris doesn’t launch until December 8, but it’s already looking fantastic. Fans and Puyo/Tetris newcomers alike should keep this one on their radar.