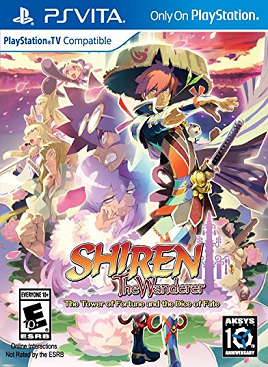 Shiren the Wanderer: The Tower of Fortune and the Dice of Fate

The Mystery Dungeon style of titles started with a Dragon Quest spin-off that would eventually go on to become a broad and wide-reaching series for many different franchises. Chunsoft were the brains behind the original concept and although they’re known primarily for working on Mystery Dungeon with Dragon Quest and Pokemon, they would end up creating their own original venture into the genre with Shiren the Wanderer in 1995. This would go on to spawn multiple sequels that would see moderate success along the way all up to the recent port of the fifth entry into the series we have today. Originally launching in 2010, Shiren the Wanderer: The Tower of Fortune and the Dice of Fate would go on to release on the PS Vita in 2015 and finally reach more modern systems this year. This series to many is a less familiar one at this point, so is it worth checking out for fans of the genre?

As the title implies, Shiren is a wanderer who travels the land with his companion Koppa in search of various secret places they may uncover. This time they are seeking out the Tower of Fortune, a place said to grant wishes and bestow riches unto those who can reach its heights. Before getting to the tower Shiren wanders across a town with a young girl lying sick and close to death. Her close friend, Jirokichi, is trying to do anything in his power to keep her alive. He decides his own bet is to find the Dice of Fate and hope the god of destiny can help save her. He sets off ahead of Shiren who is quick to follow behind him as their paths eventually meet again before the two begin their climb to change fate.

Those familiar with any mystery dungeon titles will know the basics of how gameplay flows. In this case Shiren and any other allies he has alongside him will find themselves in randomly-generated dungeons where the goal is simply to reach the exit and continue on until the ending is reached. Often resulting in a boss fight or simply a continuation of the story. Shiren the Wanderer adopts some more roguelike elements to the exploration and instead of retaining levels and continuing to grow stronger that way, levels are reset any time he leaves a dungeon, but falling in battle has the additional threat of losing all money and items. Every round Shiren must collect weapons, armor and useful items to reach further heights. If he’s lucky he can go back and store items and money to use later, as things will only continue to get more difficult, so it will take a lot of trial and error to figure out how to best proceed. Fortunately Shiren meets many allies along the way to help him in battle who retain their levels, in addition to NPCs in dungeons who will offer aid through shops or other assistance. Each floor gets progressively more difficult but with a lot of time and luck, Shiren can make it to the top. 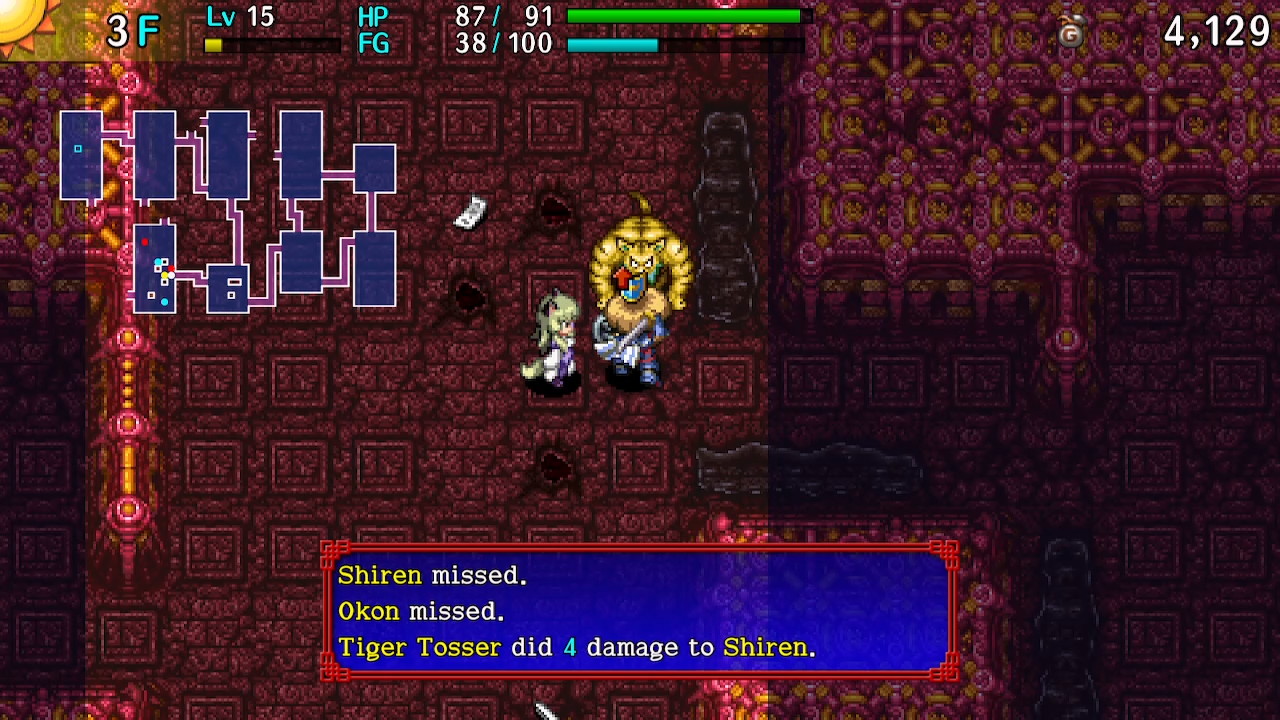 Outside of the core basics there are a few elements that make Shiren the Wanderer unique. The first is the day and night mechanic. Enemies are normal during the day and can be killed simply by being attacked. Once a certain point is reached, however, time will begin to move forward and when night comes enemies are more dangerous. With enemies so strong they won’t be able to be easily killed through normal means and Shiren will need to use special learned abilities to kill them or avoid them all together until it turns day again. When in town there’s a nifty creation mechanic that allows Shiren to leave select items in a pot for up to seven days in real time in order to create something entirely unique. In turn the created items are henceforward able to be found while exploring dungeons, making them potentially valuable assets. It’s a unique balancing act that can seem difficult at first, especially for newcomers of the genre, but sometimes dying a few times in order to get that one run that just gives everything Shiren needs is all it takes.

The visuals are delightful sprite work with tons of details in every little aspect. While most of the characters are simple in personality, they’re charming enough that it makes them fun to learn little bits about along the way and feel stressed when they fall in battle. The music is delightful and while not entirely catchy, sets a good mood while exploring. Some of the songs almost seem unusually upbeat while in terrifying dungeons but at the same time makes it feel less threatening to mixed results. The difficulty is also surprisingly well balanced, easing players in while not taking it too easy on them. It can feel brutal at times, especially when certain enemy types have a way to near-permanently decrease Shiren’s attack power during his exploration, but it just makes it all the more satisfying when the end is finally reached. 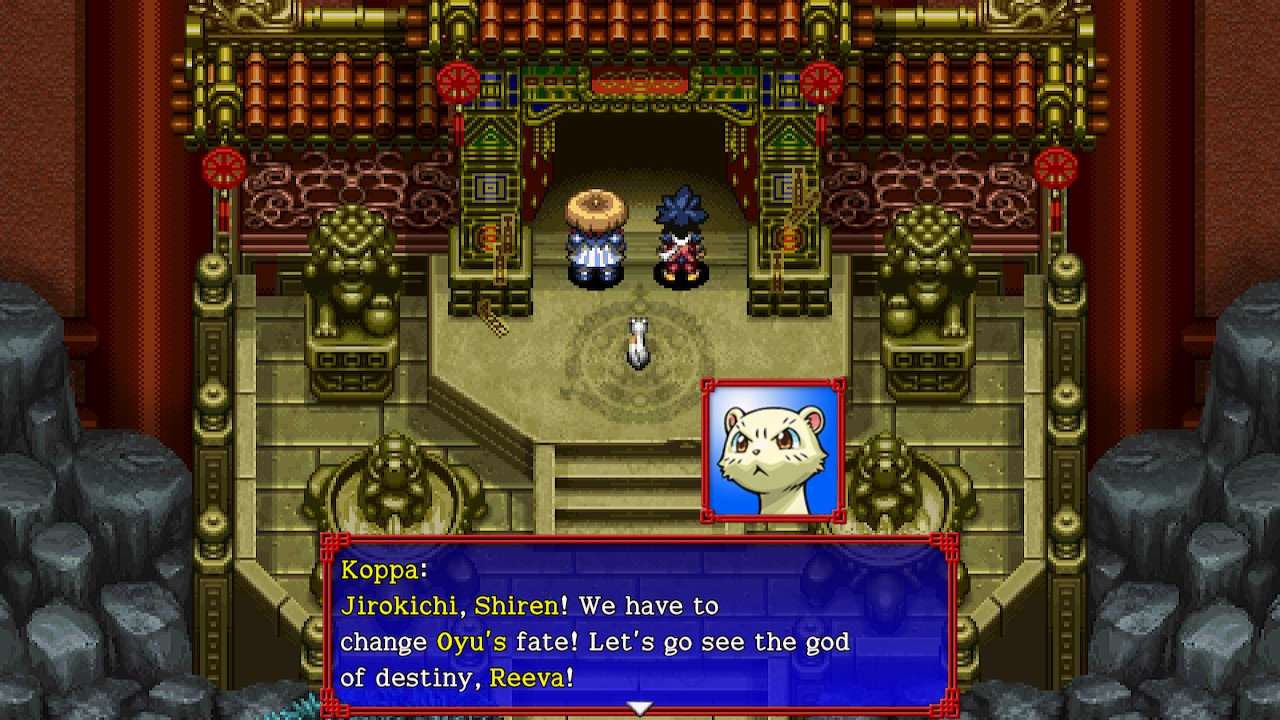 Although Shiren the Wanderer isn’t a long title, it’s hard to stop going back in and taking on the next challenge that’s offered. The story is short but offers tons of alternative challenges afterwards for those who want to put their skills to the test. Shiren the Wanderer: The Tower of Fortune and the Dice of Fate is a prime example of a fantastic roguelike that makes it both frustrating and satisfying every step of the way. Improving upon strategies and learning more about enemies helps scratch the surface until things begin to ramp up with the night time terrors that leave players with tough decisions on whether to run or fight. Anyone looking for a great challenge in a re-released mystery dungeon title should take on the challenge that awaits Shiren and his friends.