There are various types of headsets out on the market, captivating drastically different types of consumers. Whether it’s wireless or virtual 7.1 surround sound, there’s something for everyone. With Corsair’s latest offerings, one happens to market a fascinating feature in the form of Haptic Bass. Similar to controller haptic feedback, this will react to specific audio frequencies that will rumble the headset in a satisfying way, trying to immerse you more into the experience, be it from a movie or a video game. There’s always something appealing to have that subwoofer kicking off high intensity bass as you play through a cinematic experience. Immersion is key, especially in this day in age where video games are deeper and more immersive than ever before, but while the headset has a lot of promise, it does have drawbacks that drags it down.

The Corsair HS60 doesn’t come with many bells and whistles, but it’s about what you’d expect for a headset priced at $129. It features an easily adjustable headband along with both volume and haptic effect controls on the side of the outer ear cups. This is a stereo headset, although it doesn’t have surround sound out of the box, it does support Windows Sonic. It is not the lightest headset, coming in at only 420g, but it still should sit on your head without much strain your neck, and the lightly-braided cable is a nice touch that should keep it protected for a bit longer. The HS60 Haptic features 50mm Neodymium audio drivers and noise-cancelling unidirectional microphone, which works on lowest volume sounds (mostly ambient noises). It won’t mute louder background noises such as voices, and controllers are hit or miss – keyboards you’ll still hear every stroke of the key. The microphone has a 100-10kHz frequency, allowing for strong audio quality when talking to others. It may not be anywhere near a studio grade microphone, but its quality is still clearer than a lot of headsets we’ve tested. Unfortunately, the microphone doesn’t come with a wind guard, so we did run into extra popping and shuffling. The microphone is still suitable thanks to its clear audio quality, even though it lacks some of the essentials. 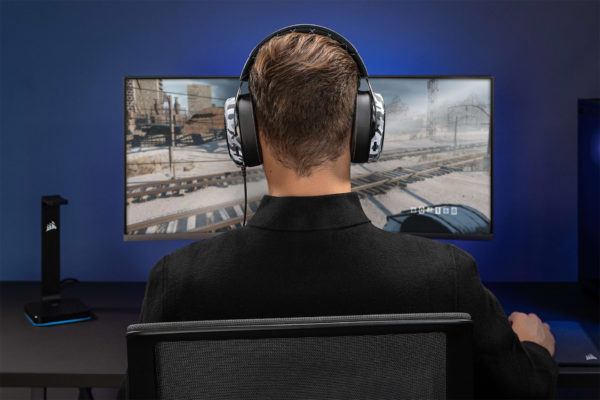 The design of the HS60 Haptic headset itself has its ups and down. This is a USB-A headset, that again, comes with a lengthy braided cable. The camo design is something that will be subjective to a person’s style, but I enjoyed it as it blended in nicely with the rest of the headphones — especially the headband. It doesn’t work with the attractive black metal mesh deign on the outside, but it’s not unappealing to look at. The headband is made of strong aluminum that won’t break anytime soon, but unfortunately the top is lacking in comfort as the plush is stiff. The earcups are also padded with memory foam, but aren’t too deep, coming in at .75 inches. Unfortunately, this brings up the biggest problem I have with the headset: the HS60’s is simply not comfortable to wear. Maybe it’s because the ear cups are not deep enough, but these irritated my ears after around an hour of use. It starts off fine for a while, but the more they’re used the more uncomfortable they became on my head, specifically my ears.

As you might expect, Corsair uses their iCue application for you to completely customize the headset’s audio levels. You’re able to select different equalizer presents and adjust the various settings to get more out of the device. There’s nothing else here outside of adding your own equalizer preset, but it’s enough for enthusiasts to fiddle with, and core consumers to understand what each selection has to offer (Bass Boost, Pure Direct, Move Theater and FPS Competition). This only helps deepen the quality of the HS60 as playing games, movies and music all performed wonderfully. It’s crisp and clear and with this level of customization at your fingertips, you can adjust it to your heart’s content. As the name suggests, the haptic feedback is the core feature consumers will be buying the headset for. It goes up from 20hz to 160hz bass, with the capabilities of turning down how much haptic you want coming through.

I use the Corsiar HS60 quite a bit when listening to music as it gives an extra oomph that not only sounds brilliantly but feels good on the sides of my head — at least for a time. These are also good, but not anywhere near a game changer for movies and television. Unfortunately, these headphones are far more distracting for games than I would have liked. The immersive element come in the form of an increased bass effect through haptic feedback, so playing a game and them shaking on your head is disrupting, messing with your sensors especially in competitive games. In single player experiences it’s less intrusive, but not what I would recommend. Now granted, you’re able to turn this down, so below halfway is much better, but regardless, it’s not something I prefer when playing games. In addition, to those who wear glasses, be warned that these headphones will move your glasses to the point it will slightly blur your vision. So in that respect, they’re not good for either productivity or work, but instead are great for music and potentially movies/television. 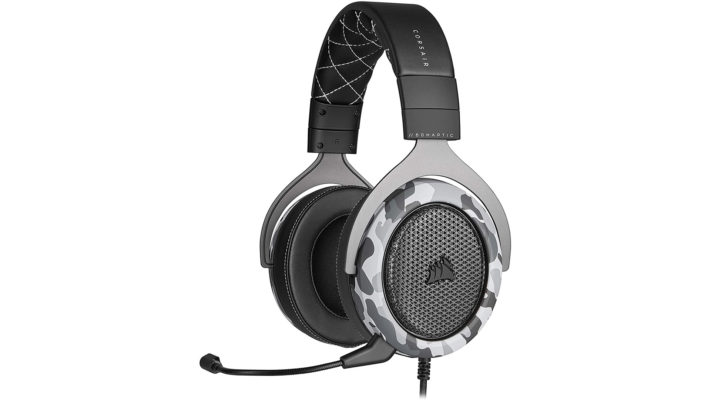 The Corsiar HS60 has a cool gimmick in the haptic feedback, but it comes with serious drawbacks. The audio quality is great for a stereo, and the detachable microphone, while missing a wind guard is clearer than was thought. The haptic feedback is also phenomenal for music as I find myself preferring it over a more feature-rich wireless headset. The haptic feedback, however, while works great in some areas can get distracting in games. You can adjust the frequency it rumbles, but it’s still not the ideal way of playing a game. Most importantly, though, the headset isn’t comfortable to wear. Maybe this is just because of my dome or the shallower ear cups, but I could not wear this headset for more than an hour as it squeezed both my head and agitated my ears. I like using the HS60 in limited bursts as the audio quality and haptic feedback is good in some situations, but as far as a gaming headset goes, it’s not something I would find myself prioritizing.