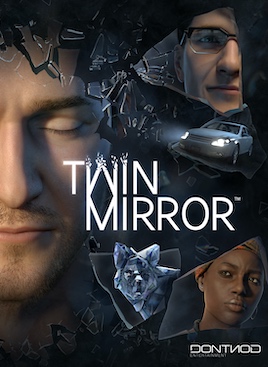 It’s taken little time for Dontnod Entertainment to slip into the role of trusted, narrative-driven, adventure-led developer in recent years. With a little help from the unexpected demise of Telltale — though it’s a gap the Parisian studio may not exactly have been looking to fill — names like Life is Strange and even 2018’s Vampyr have shown that regardless of setting and of the influence gameplay may hold, Dontnod have at least crafted their own unique take on decision-making narratives. The assurance one must have with one’s choices (and reasons for doing so) when that next fork in the road comes and dealing with the consequences when they inevitably show up later down that figurative road. It’s a minute piece of design, but no matter the game and no matter the circumstances, split-second decision-making can have a lasting effect when dealt right.

Beyond that, something else that has likely attracted so many to Dontnod’s portfolio is the studio’s knack for weaving spots of the supernatural and the fantastical into what many may hail (or at least perceive) as believable, relatable, real-world narratives. Worlds that, if you were to subtract the superhuman powers and the like, could possibly stand on their own. There’s a debate, as there often is, to be had on the overall quality of what the studio has put out, yet that balance between the reality of the world presented and the liberty with which its gameplay mechanics materialize is what has made each Dontnod project an attractive proposal. Then comes Twin Mirror — Dontnod’s second big project of 2020, following the three-part release of Tell Me Why earlier in the year — and the comfort in familiarity flies straight out of the window. Granted, as touched on in our first impressions last month, Twin Mirror shares more the same DNA as a Life is Strange iteration than it does the developer’s more action-oriented tales prior. But even then, it doesn’t take long for Twin Mirror‘s own deviations and attempts to plot an entirely different course to reveal themselves.

The intrigued optimist in us would describe this as a more straightforward, murder-mystery, detective affair. The realist by contrast would state that Twin Mirror is another case of strolling around a set number of environments, interacting with objects and making a couple of momentary choices that effect only so much as the resulting dialogue rather than some radical conclusion. There are branching paths per se, as there are different ending depending on a few critical choices prior, yet little of Twin Mirror‘s presentation hinges on the presence of some fantastical element. And too that same attraction of reality and the supernatural mingling in a shared space. Aside from the presence of a character only main protagonist, Samuel Higgs, can see and talk to — referred to as “The Double” — as well as an internalized realm referred to as the Mind Palace. A bright, crystalline-covered dimension that sports a pleasant-enough aesthetic clash from time to time. Yet Twin Mirror‘s focus is predominantly with its gritty, grime-covered, small-town setting of Basswood. Naturally there’s a reason for the desaturated, near-deprived tone — aiming to tell the tale of a town having fallen on hard times — and in its opening couple of chapters, Dontnod do a sufficient job at sowing both curiosity as much hope that its early themes are explored later on. 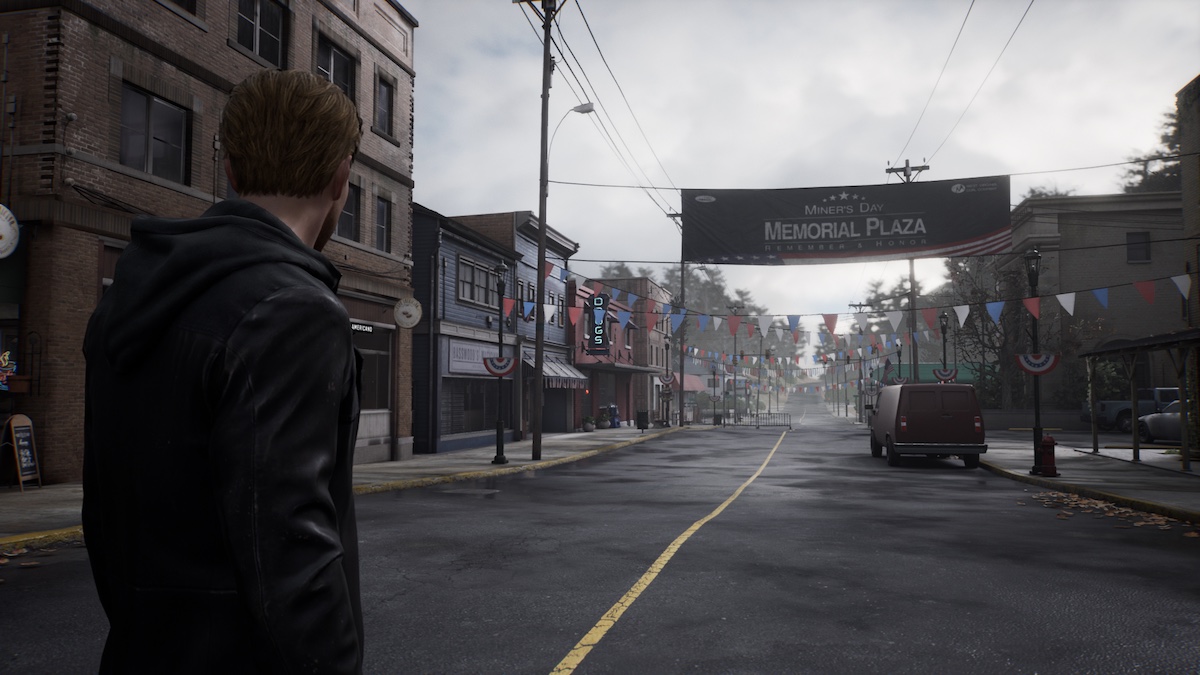 How disappointing it is to find that Twin Mirror fails to capitalize on its promising opening hour or so. In a game both surprisingly short and woefully sparse more-so on some measure of pay-off, early reports of the game having originally been episodic are in fact more glaring to see. Glaring in the sense that Twin Mirror feels rushed, inconsistently paced and hasty to get to its multiple conclusions, both so far as the murder-mystery goes and of a revelation centered around Higgs himself, the game in no way fleshes out beyond some last-minute reveal. As a result, neither the twists nor the revelations offered carry any sort of weight or impact beyond a sense Dontnod were not just desperate to try and pad the run-time, but hadn’t planned for the themes and messages they were hoping to explore. Because squint hard enough and you can see there is a semblance of a theme going on in Twin Mirror — not least in the closing chapters where perhaps the biggest player-choice comes into play.

In all honesty, it’s the interactions Higgs has with his double — characterized as this more morally-minded, socially-aware part of Higgs’ psyche — that are perhaps Twin Mirror’s brightest spots of writing. Whether it’s this character interjecting during a conversation or at times the friction caused between the two. It’s not that Higgs is a completely unremarkable, forgettable or irredeemable character from a writing stand-point — though he’s less remarkable than Dontnod’s other game-leading protagonists — it’s just that Twin Mirror‘s short length, standard-affair gameplay and constant scene-hopping, like so many of the other faces introduced, gets so little time to develop. It would’ve been great to see Higgs and his double flesh out their differences, have their perspectives challenged. Or at the very least, explore why the game places such relevance on the fact Higgs has a seemingly-invisible, near-identical double following him everywhere he goes. 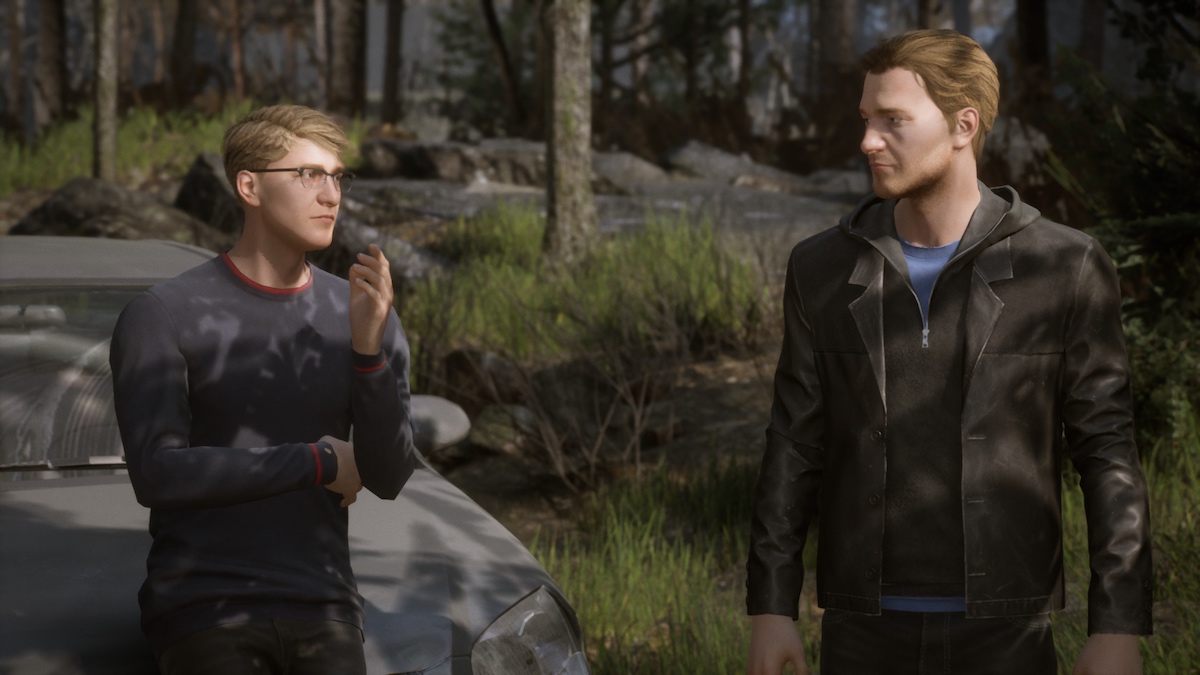 It’s the only spot, outside of occasional trips to the Mind Palace, where Twin Mirror sprinkles in that familiar Dontnod-like meshing of the normal and abnormal, but in this case it feels a touch mandatory, forced even, given the overall direction. That goes double for those Higgs interacts with along the way, not least those whose reactions and responses are by way of some player-choice and conversations can run so far off a tangent you lose any believability you had to these people. To give the game credit, there’s a brief spot of pleasantry to be had at seeing how these many faces react to Higgs interrupting them mid-spiel. The irony is that when Dontnod aren’t desperately explaining Higgs’ backstory almost at the last second, Twin Mirror‘s character moments do sport some potential.

But it’s these moments of decision-making that aren’t inherently the problem. Despite the short length, Dontnod do at least manage to place these at the kind of critical points that will make players think long and hard about which route they want to go down. Dontnod still do a good job at having that pressure burden players and while not the strongest dosage, Twin Mirror is briefly effective in that regard. But even then it’s hard to feel satisfied (or otherwise regretful) long-term about said choices when Twin Mirror seldom makes them feel like they have ramifications. A missed opportunity that shows up in no better a place than the spots of investigation. Players required to mosey on through a set, closed-off environment until all relevant objects are interacted with. Upon which Higgs enters his Mind Palace and the player is required to construct a likely order of events. As novel the variety of outcomes may be to watch in their low-poly, crystalline forms, the problem is that these moments feel less like “choices” and more just trial-and-error puzzles that can be so easily solved through brute-force. Switch one or two elements around long enough and Higgs will proclaim he’s figured it all out. There’s no way to go with the “wrong” path here, meaning your investigation work — and the risk of having come to the wrong conclusion — not only feels far from a job well done, but little more than a road-block. A story interrupted by gameplay, you could say.

That’s not to say you can’t craft a game whose story and character interactions can’t be the focus. But even then, when the game is left to tell its tale, on a technical level and running on consoles at least, Twin Mirror so easily manages to pull its players from out any emergence it’s hoping to build. Character models appearing one too many times stiff and lifeless with said scenes lingering as if waiting for the back-end to trigger the next change of perspective. It doesn’t help that outside of cutscenes, Twin Mirror struggles to keep a stable frame-rate with plenty of sections dipping to low-20s. Even transitioning out of cutscenes can result in the environments and accompanying assets failing to load-in — Higgs, briefly, floating amid a void as both backdrop and environmental objects hastily pop into view. 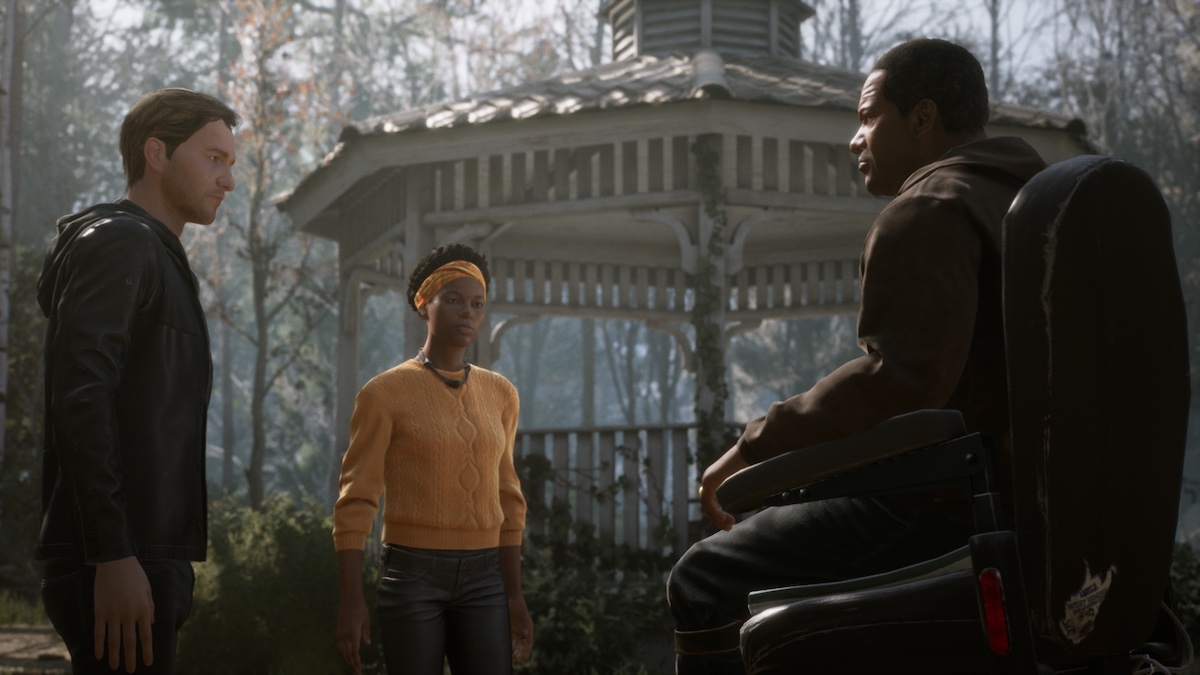 Without a key mechanic to keep gameplay fresh, or even a story that’s both fleshed out and well-structured, Twin Mirror fails to find any kind of hook beyond the fleeting intrigue in how it all ends. Even then, brief a run-time the game actually requires of its players, the conclusion is a far-cry from the studio’s better works. Clearly there’s a theme, maybe even a message, tucked beneath the downtrodden attire the game sports, but with such a rushed progression and lackluster attempt to develop both characters and setting alike, Twin Mirror‘s overall story is likely to fall by the wayside. Dontnod are capable of so much more than what this latest outing provides — it’s not terrible, but Twin Mirror is a misfire from a developer whose experience and past achievements would have you presume they should know better.