A while back, if you had told me that one of the first big games of the year would be something from Bloober Team, I would probably have replied with some sort of confused look. True, the Layers of Fear games have been neat and Observer was a hit, but the Polish developers haven’t exactly had much up their sleeve that could, say, provide a marquee title for an entire gaming platform. Well, here we are now, and after an acquisition by Microsoft, a delay of Halo Infinite, and more than a few impressive showcases so far, Bloober’s latest game, The Medium, has ended up as not only one of our most anticipated games of 2021, but it’s also in a position to wind up as the first big Xbox Series X game. And during a virtual hands-off preview with Lead Game Designer Wojciech Piejko and Producer Jacek Zieba, it showed off its initial potential quite well.

The fifteen-minute clip shown quickly displayed what we needed to know, as our titular medium, Marianne, arrives at an abandoned resort known as the Niwa Hotel. After the player examines some abandoned luggage nearby emitting a bit of energy, Marianne hears a lot of screaming, learning that the legends of the “Niwa massacre” are apparently true. She then begins her search for a friend known as Thomas, as various parts of hotel become highlighted, allowing us to interact with them. Nothing too creepy yet…until the bell on the front desk in the lobby starts dinging repeatedly. 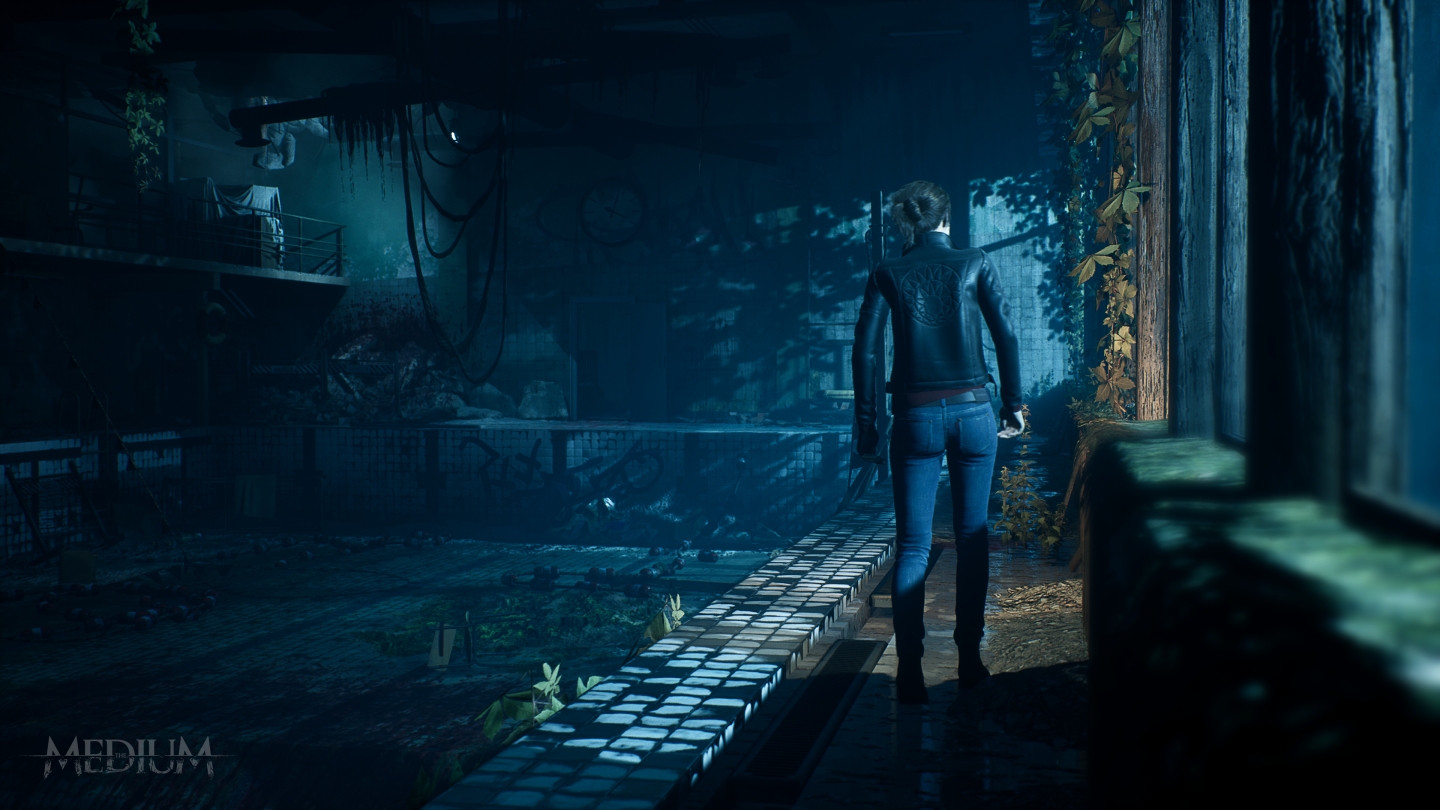 After answering the bell, suddenly we get two Mariannes in different worlds, the other being in the spirit world, with a distorted version of the Niwa Hotel covered in mud-like, hellish colors and weird organic growths everywhere. The Marianne in the spirit world suddenly gains white hair (and bits of energy attached to them later on) as their psychic powers begin to get showcased even further, and a creepy girl with a mask, a missing arms and various bits of exposed flesh known only as Sadness appears to them. After a quick talk, Marianne finds themselves following Sadness, which is where things truly kick off.

There’s a lot to look forward to when it comes to The Medium: The creepy atmosphere, the soundtrack by Akira Yamaoka, the impressive visuals in both worlds (particularly the spirit world, which expertly draws inspiration from the surreal Polish artist Zdzisław Beksiński) and more. Yet one relatively minor feature was one that intrigued me the most. That would be how during certain cinematics or gameplay sequences, such as when Marianne is talking to Sadness or when having to perform an out-of-body projection in order to fix a broken elevator, The Medium switches to split-screen visuals, one showing what’s happening in the real world and what’s happening in the spirit world at the same time. It showed more of the impressive visuals, as well as the technological prowess when it came to displaying two different versions of the same world at the same time. It’s a feat that always looks impressive.

But the split screen got me to thinking that this could be used for effective gameplay as well. Maybe, say, having to keep an eye on Marianne’s body during an out-of-body projection while during a situation where it may be in danger, or having to maneuver around two differing sets of obstacles simultaneously during a possible action sequence or something more fast-paced, or even just something simple like having to note a visual cue in one world for the solution to something like a timed puzzle. Arguably nothing groundbreaking, but just nifty ways to integrate the central gimmick and and the visuals with the gameplay even further. 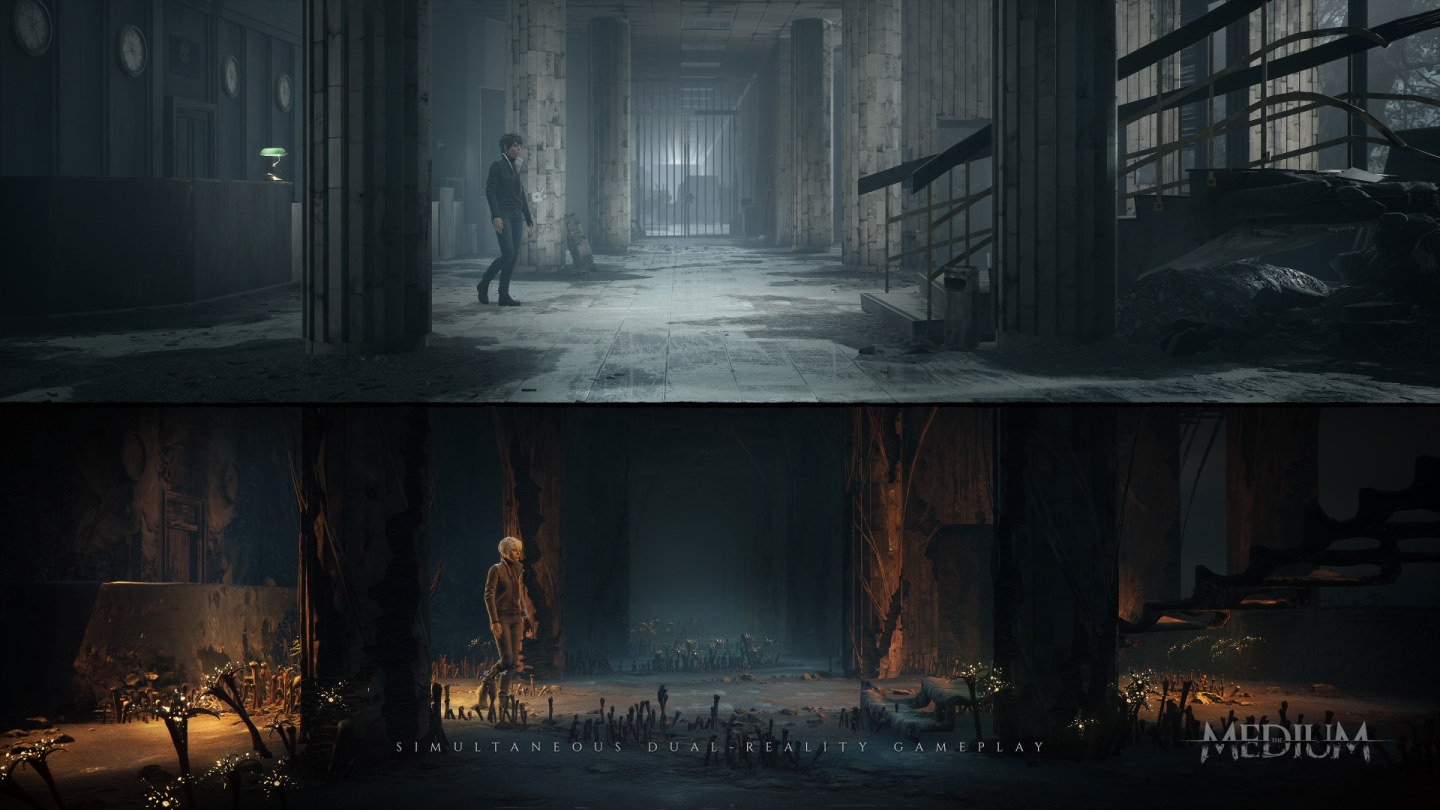 Moreso, though, it appropriately reminded me of other horror films in general. Maybe it’s just the part of me that loves cult cinema, but certain titles immediately sprang to mind upon seeing The Medium in action. Namely Wicked, Wicked, a horror-thriller done entirely in split-screen (about a killer targeting people in a hotel, no less) or the works of Brian De Palma, such as Phantom of the Paradise, Carrie, or Sisters. Given how the technique in those films is used building tension and showing off different perspectives and viewpoints (and perspective changing one’s perfection is indeed a central theme in The Medium), it feels right at home here. It also made me ponder about the influences; when asked, the team said the two of the main influences were the Silent Hill games and The Shining, though.

That last part in particular made a lot of sense, given a good chunk of the game later on sees Marianne in a hotel being mercilessly chased by The Maw, a hulking creature visible in the spirit world yet invisible in reality, with the gameplay we were shown having them shouting that Marianne “STAY WITH ME!!” among similar things, all while crying and acting like a crazed friend or lover, with behavior that wouldn’t seem out of place for someone like Jack Torrance. Thankfully, they’re also blind, so Marianne can hold their breath and silently lurk around, getting to a point where they can cut a cable in order to drop a massive scaffolding, acting as a distraction.

The puzzles in general that were shown weren’t exactly the most complex, though they were effective, like having to find a deceased child’s mask in the spirit world and take it back to the correct place in order to get out of a moment where Marianne is somehow trapped in the spirit world. The out-of-body experience does provide challenge as well, as Marianne can only remain out of their body for so long before they perish in the real world, as shown by their astral body disappearing. Of course, the reason Marianne was in the elevator to begin with was because stairs that are whole in the spirit world were wrecked in the real world, acting as an appetizer for the puzzles to expect later on where players have to work with the differences between realms, even changing one world by altering the other. The team has said the gameplay focuses more on the “adventure” side of things, with a focus being on exploration and puzzles. 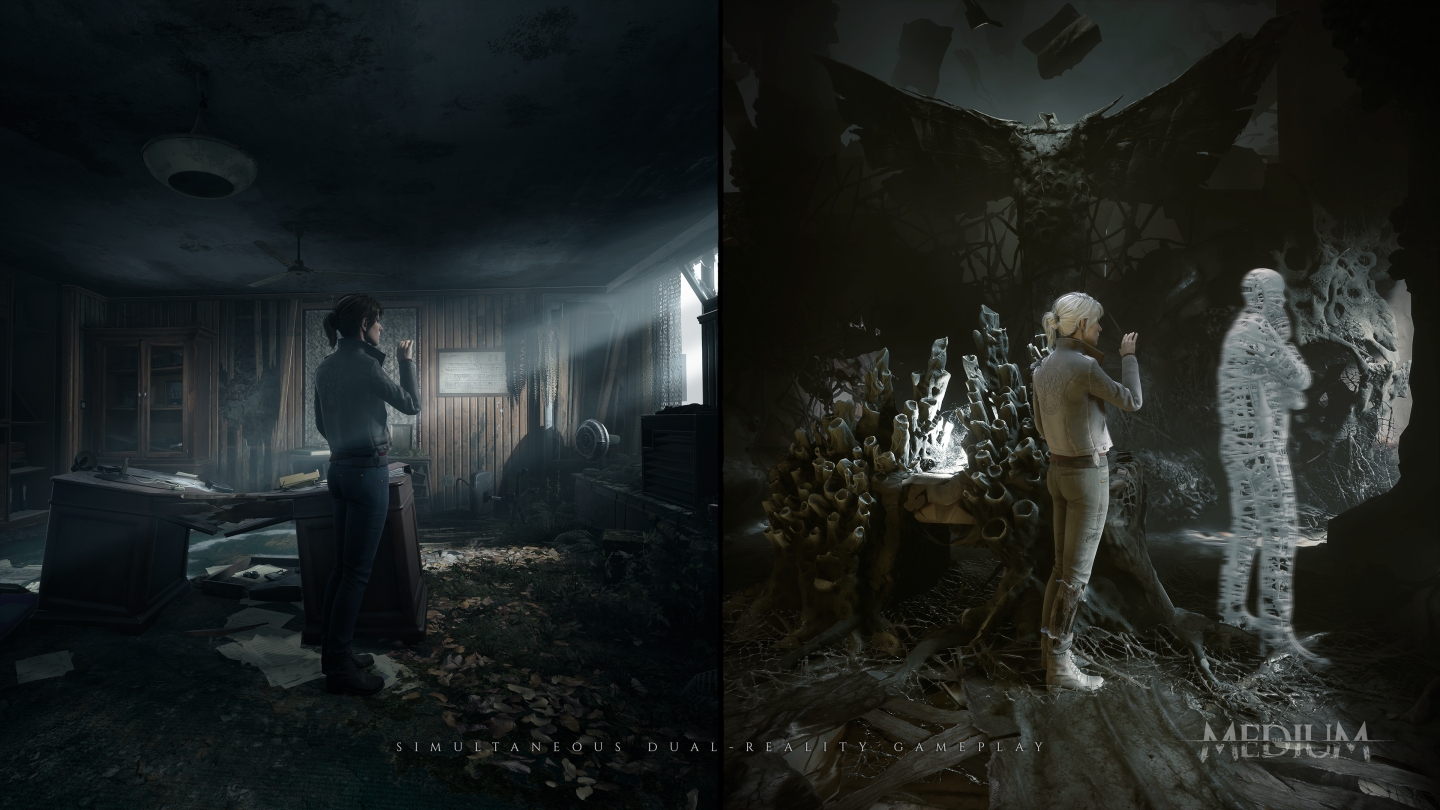 But while I’m always up for such adventure games, I do admit the sections with The Maw have me a bit worried, as more Outlast-inspired horror games where you have to avoid and run away from a nigh-unkillable monster have gotten tiring over the years (though the game’s description does mention a “spirit blast” ability that could be a possible defense, it wasn’t on display). It also doesn’t help that Bloober’s previous horror game, Blair Witch, was polarizing. Several people I know disliked the huge shifts in gameplay, particular how the end section basically switched into a dragged-out game of P.T. But the team has reassured us that there will be a greater balance here, so it should hopefully make sure the more puzzle-heavy segments and parts with The Maw merge together well.

While our quick preview of The Medium only highlighted what appear to be relatively early moments in the game, it still painted a picture of a haunting yet eye-catching world (or worlds) worth exploring, with a unique gameplay hook that opens the door for a lot of clever tricks while showing off the power of the Xbox Series X. PC owners won’t be left out as well, but The Medium easily has a chance of being the first killer XSX app when it comes out on January 28.