It only seems natural that not a couple days left of 2020, Devolver Digital would go and make a cheeky, though certainly in-character, reference to how they have even more games to unveil throughout 2021. Five in fact, which if true would mean Devolver have one shy of a dozen titles flying under their banner over the next twelve months. There doesn’t seem to be anything stopping the publisher’s ever-increasing momentum as one of gaming’s most trusted brands at present, but to lavish them with all the praise would be to misconstrue just where the real credit should go. So let’s just say that we’re all but assured that we’ll be seeing plenty of Devolver’s red-and-white branding this year. And initially, it would seem that they’re not wasting any time with the dawning of a new year — developer Skeleton Crew Studio’s Olija arriving on our shores at the tail-end of January. 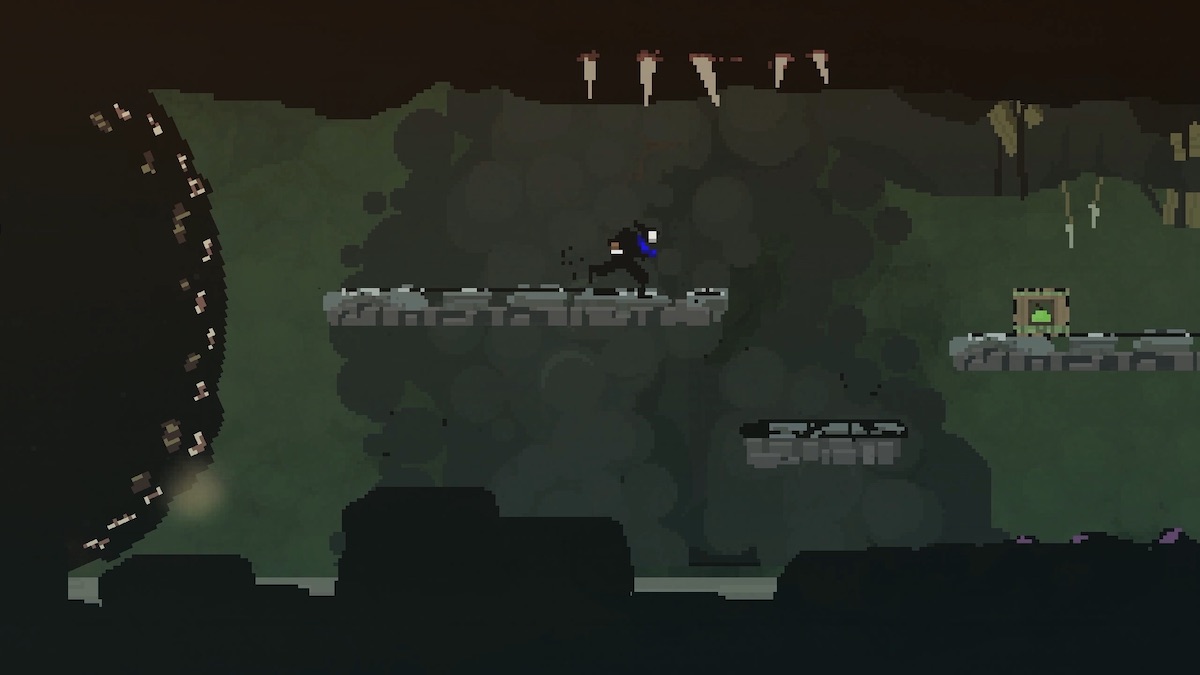 Already deep into things at present, but if the first couple of hours spent with the game are anything to go by, Skeleton Crew’s focus is clearly two-fold when it comes to defining what kind of platformer Olija is trying and wanting to be. The more surprising element of this pair is the way the game hearkens back to the early ’90s era of adventure games. Whether it’s the chunky pixel-art, the attempt to render plot-pivotal cutscenes in as similarly-minimal a pixel count or just the air of foreign, desolate mystery that the setting, Terraphage, manages to paint with just as equally stripped back a visual fidelity as the characters that populate it. Olija‘s design might not be the most complex, but what it may lack in some painstaking detail, it makes up for with an uneasiness that manifests as this balance between decay and hostility.

Again, this is a pitch you’ve all likely heard many times by now. Stranger in a foreign land — danger lurking around every figurative corner and atop many a platform alike. Olija may show lesser, if any, effort to differentiate, but what it lacks in visual flair it makes up for two-fold. Firstly, there are the spots of hopeful optimism and curiosity that make the story (secondary that element might be) more than just another gazing into a ravished, ruined land of yonder. Said moments are brief — repeated more so as you find yourself back at the hub on many an occasion, where your fellow shipwrecked crew try to rebuild and make do with what they’ve got. 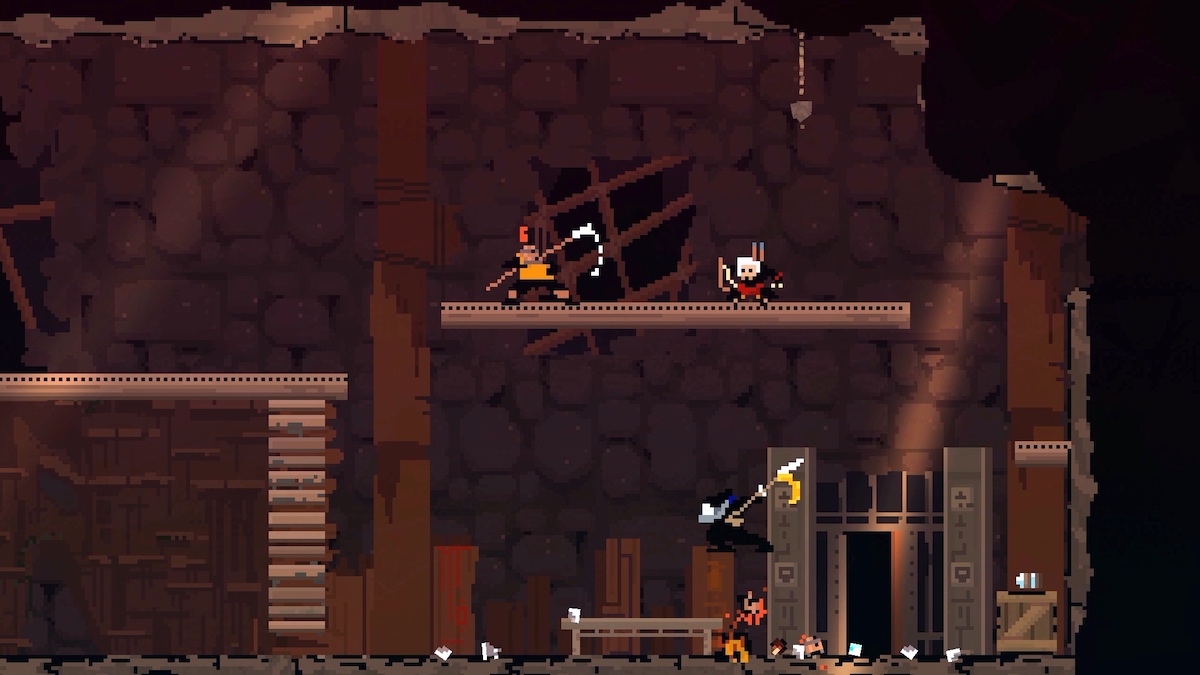 Then there’s the gameplay itself and more specifically, the combat. The one part of Olija that keeps one’s journey through the fractured islets of Terraphage, content with a satisfying hook. One whose control stick-flicking, teleporting snap to an enemy, simple a mechanic it may be, gives encounters that touch of the frenetic and the tense. As little as I can offer at this point in the early parts of the game, let’s just say that it works seamlessly with the kind of non-linear platformer Olija is. The kind of game that might not require players chaining together hits on a multitude of enemies at one time, but for those who can, ends up orchestrating a devilishly-good ballet of sorts with responsive strikes and desperate dodges alike. Hurl one’s harpoon, warp to it with the tap of a button, pick it up, rinse and repeat. It needn’t be complex and better still, it takes little time for players to get into the rhythm.

With a combat style such as this, you can’t help but move onto the obvious question that stirs up from out such enjoyment: can it last a full game? And if, just like the visuals, the game is resorting to a less-is-more approach, how well does that play out in the long-run? Plenty of games past have draped similar preconceptions on a ruinous landscape filled with deadly traps, but of a game whose pixel art and implied character expressions is never too far from sight? What Skeleton Crew may have up their sleeve is a mad-dash style of combat and understanding that players don’t want to waste time getting to the thrill of weaving in and out of danger. Anyone looking for a calm, serene start to 2021 in totality may have to look elsewhere. Olija‘s frenzied, irresistibly combo-like hook offers a welcome contrast to the grim surroundings its game world paints. It’s that brand of action-platforming that one hopes the game can keep up until journey’s end.