A long time ago there was a graphic novel series, six volumes long, that spawned a movie.  The movie, as they used to tend to do, got a game spin-off, but rather than being the usual licensed product that ticks off a check-box in the marketing campaign, something special happened.  Scott Pilgrim vs. the World was a 2D pixel-art brawler bursting with character, packed with secrets, and with a killer soundtrack tying the action together, and was a fan favorite for as long as it was available.  The problem was that it was only available for four years, first coming out on PS3 and then Xbox 360 in digital-only form, and then the licensing agreement expired.  Like many other games afterwards (OutRun 2006: Coast 2 Coast being another good example) Scott Pilgrim vs. the World was gone, but unlike a good number of delisted titles, it never had a physical edition to at least keep it in some kind of circulation.

For practically the entire time Limited Run Games has existed its most requested game has been Scott Pilgrim vs. the World, and when Ubisoft revealed the game’s return back in September, the request changed from a semi-serious joke/meme into an expectation that this could realistically happen. Those expectations have finally been met with the announcement that Scott Pilgrim vs. the World is getting a six-week open pre-order for PS4 and Switch on January 15, with an Xbox One version following later at an unspecified date.  It’s even coming in three separate versions, all of which are fully available for the entire pre-order window.

The standard edition is the usual game-in-a-case, with a reversible Sonic Adventure-inspired cover by Scott Pilgrim creator Bryan Lee O’Malley.  The deluxe edition comes in a Genesis-styled clamshell case with another reversible cover, includes the Anamanaguchi soundtrack CD, plus a couple extra goodies in the form of a sticker sheet and fold-out world map.  The third version is the big one, titled the K.O. Edition, and it comes in a giant box with everything from the previous editions plus laser-etched drumsticks, a pair of guitar picks, pin and a roadie case that opens up to reveal Scott’s band Sex Bob-omb playing in the LED spotlight to a clip of Anamanaguchi music.  For those not wanting to pre-order, Best Buy will also be getting copies, although only the standard edition and with a different cover too.  Scott Pilgrim vs. the World will be available to anyone who wants it in whichever format they need for a good, long pre-order window, so whatever may be happening with the license in the future at least this time if it disappears again there will be plenty of copies to prevent the game from being lost again.

Scott Pilgrim vs. the World: The Game goes live for pre-orders on January 15, complete with a good amount of merchandise to supplement the game.  For a full view of everything that will be available, take a look at Limited Run Games’ Scott Pilgrim page. 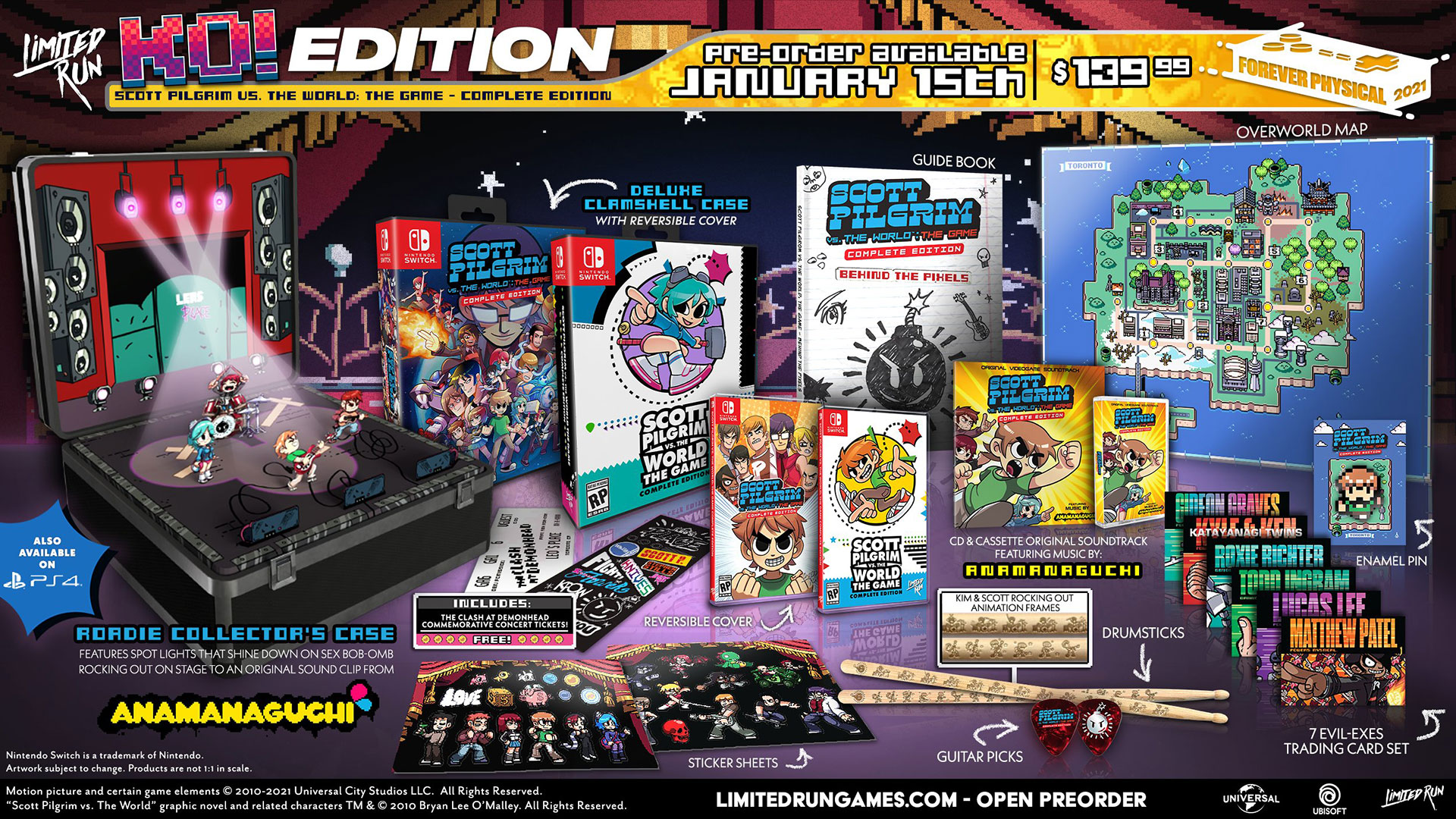