Despite all the promises of Star Wars, the WWII-style of aerial dogfighting is impractical in space.  Thankfully that’s completely irrelevant in a science-fantasy universe where planets are huge in the sky, zappy-lasers travel at the same speed as physical projectiles and the g-force of a rapid turn doesn’t make the pilot black out.  One trope after another has gotten layered on top of the space opera, slowly turning the “science” in science fiction into one of the least-accurate words possible to refer to the genre, and that’s not any kind of problem at all.  A good space opera is a giant, beautiful, sprawling mass of ridiculousness that only gets by due to how awesome it is, and Everspace 2‘s Early Access launch is a perfect example of what makes it so much fun.

The original Everspace was a semi-roguelike space shooter, with each run taking place over a series of randomized areas.  One jumpoint led to the next, and while you could explore the section of space you were currently in, once it was gone there was no return.  Fly fast, shoot hard, mine, scavenge, craft and trade, and just maybe eventually survive to see the final area.  Everspace 2 dispenses with the roguelike, instead taking place in a series of star systems with a huge number of areas to explore.  Each area has a number of points of interest, whether it be floating wreckage, various types of freighters or space bases, mining outposts, asteroids clusters and much more, but the most common thing in each is the threat of an outlaw encounter.  That’s what all the lasers are for. 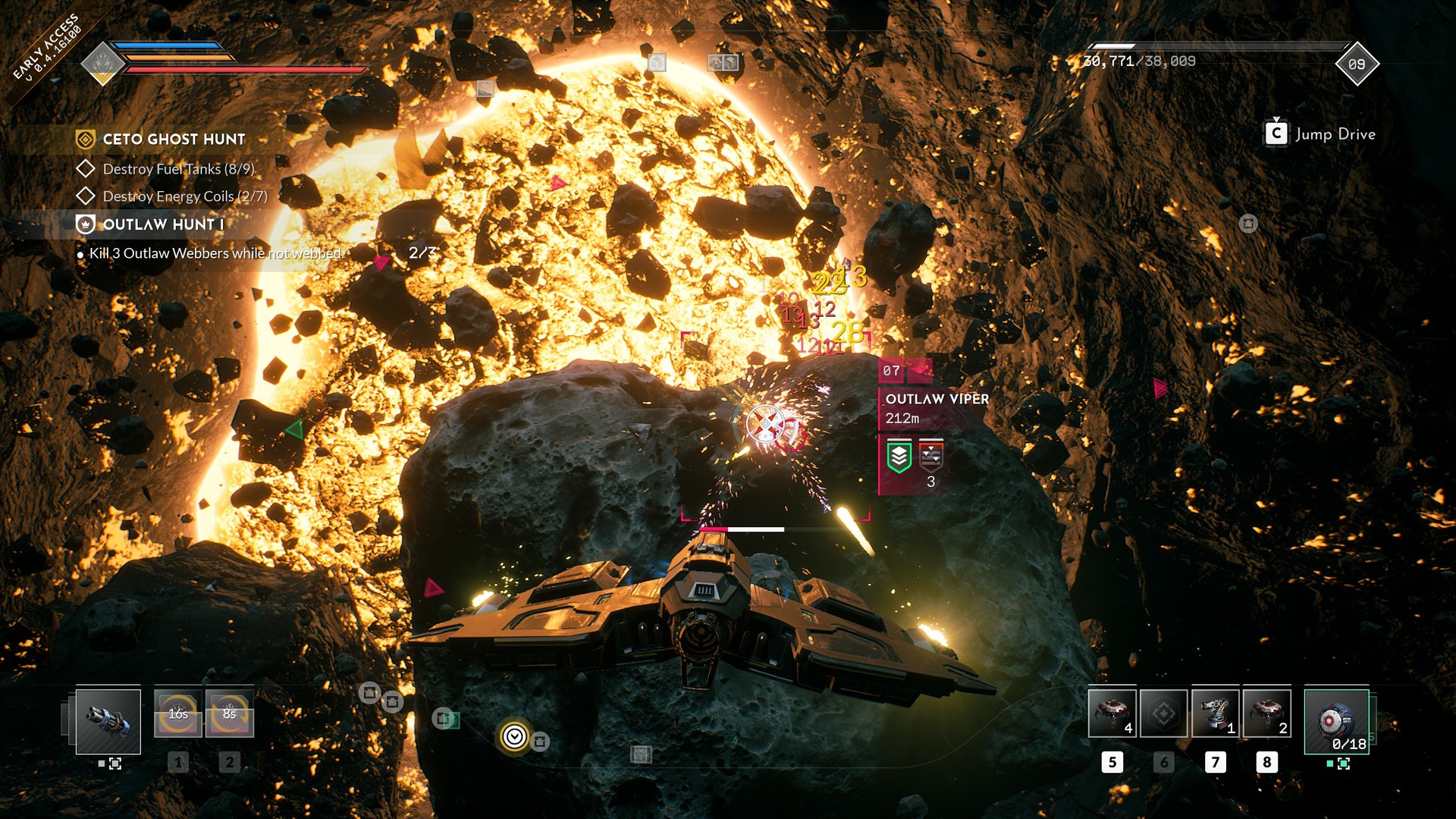 Combat in Everspace 2 is fast, with ships that flit nimbly about the screen and work hard to flank you.  While the helpful HUD displays a targeting reticle indicating where, based on the enemy’s current trajectory, a shot will hit, a big part of the challenge is being accurate enough to line it up in the first place.  The starting ship has slots for two guns and two secondary weapons, and it’s not unusual to cycle through all four in a single encounter.  A good early tactic is to fly at standard speed to enemies in the distance, shooting a few mines forward to help thin their defenses as they approach, then pound down the shields with an energy-based gun before switching to a different gun to shatter their hull while tossing out a few heat-seeking missiles along the way.  The secondary weapons are limited usage while guns are only limited by a cooldown phase, and there are a good number of each to play with in search of the perfect loadout.

Your ship also has a number of slots for equipment and consumables, each enhancing its abilities in different ways.  Speed, energy reserves, scanning range, tractor beam distance, cargo capacity and more are all waiting to be found.  Everspace 2 is a lot of things all at once, but near the top of the list is it being a loot shooter.  Enemies drop equipment, chests and derelict ships have goodies inside, bases sell everything from armor plating to trade goods, and there’s always a new decision to make on the path to beefing up the most powerful ship possible.  That’s a subjective judgement, too, because there are a good number of ships to fly, waiting on the right pilot’s playstyle to wring the most out of them.

While Everspace 2 is combat oriented, there’s a lot more going on than just fly & shoot.  A fully-voiced story slowly develops as the main character goes from an employee of the callously-indifferent Grady & Brunt corporation to a free agent, which is like an outlaw except all that plundering is for the purest of motives.  Killing enemies does provide experience for level-up, but there’s also a home base that slowly gets more people added to it, and you can invest resources from the adventure into leveling up permanent upgrades, such as a better tractor beam or destroyed enemies dropping an energy-replenishing orb.  Alternately those resources can be traded at different bases, and with a little effort go into funding your own personal collection of the best spaceships available.  It takes a bit for the story to open up a good selection of major areas, but even just flying around at high warp speed can turn up side-missions and new areas.  Usually with something to shoot, but frequently with a wreck to investigate once the fireworks have wrapped up. 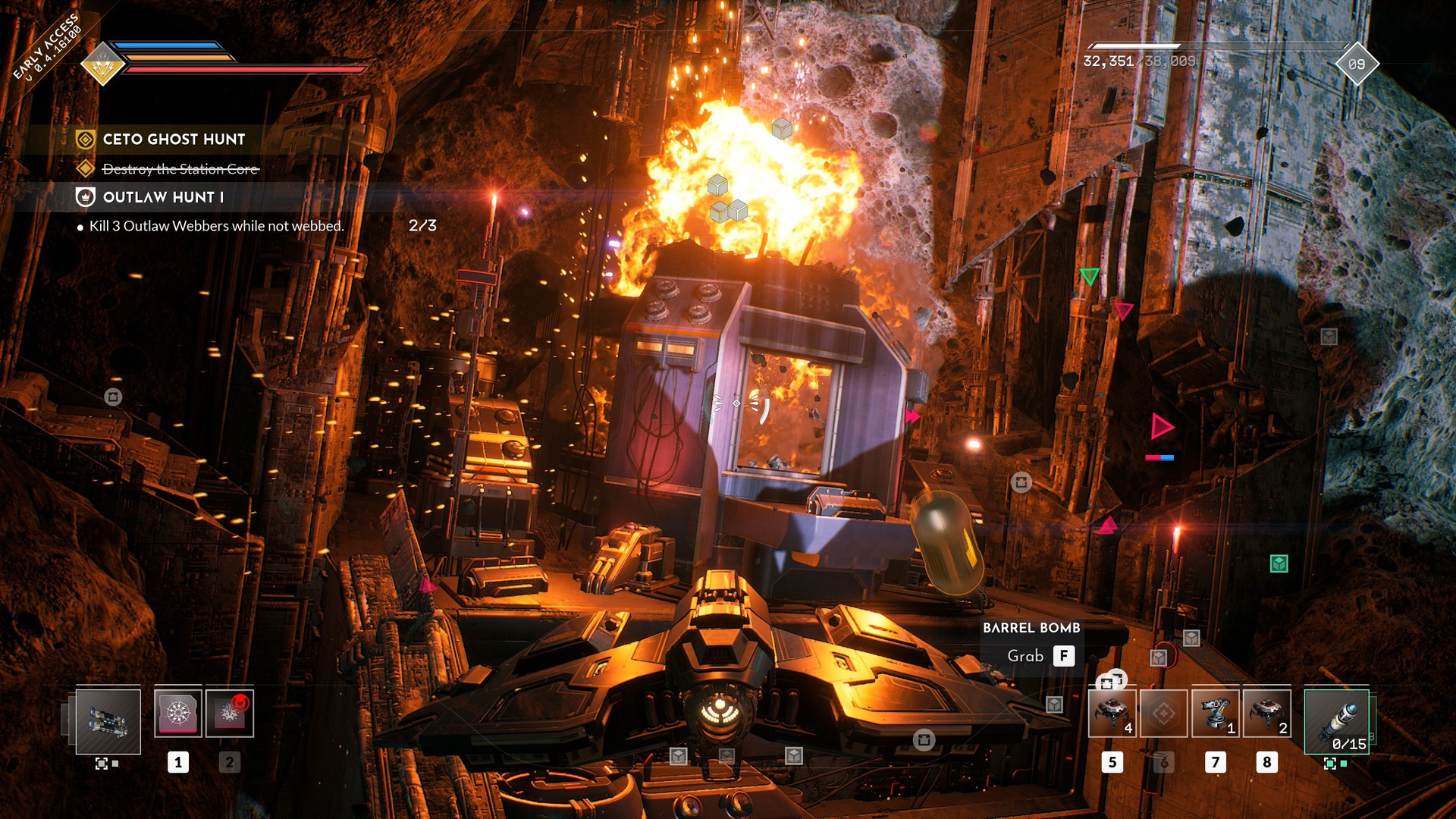 While Everspace 2 has launched with a hefty amount of content, it’s still clearly in beta form right now.  Not from the gameplay, which feels great and nicely polished, but rather the story aspect has a few notable gaps such as placeholder art for cutscenes.  The story is also less than halfway complete, with two of the planned eight star systems available.  There’s no question that there’s plenty of content in the current version, especially if you’re someone who can’t fly past a side-quest, but there’s a minimum of a year’s development ahead that will add more areas, weapons and skills, fancy space effects, story and all the other necessary bits to transform Everspace 2 into its final form.  Based on the current game, though, that final form will be a monster, because it’s already far too easy to lose a couple hours heading from one waypoint to the next, chasing down new events as they pop up, taking on side-work when the jobs become available, or just enjoying the view.  Once the outlaws are cleared out of an area it’s usually peaceful, with the sunlight glinting off asteroids or illuminating the twisted wreckage of long-dead freighters.  There’s a huge chunk of space filled with quests and combat waiting in the stars, but in the moments between the chaos, it’s good to take in the details of a universe that’s more beautiful than could realistically be expected.