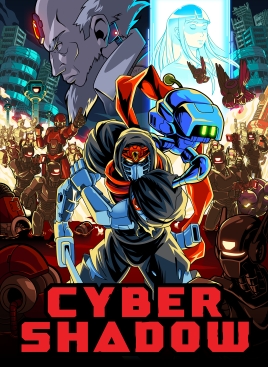 I feel confident in saying that when Yacht Club Games released Shovel Knight back in 2014, it set an impossibly high bar to clear for all retro games that would come afterwards. Sure, it was an amazing game on its own, but more than that, it nailed all of the old-school vibes it was going for. From its graphics to its gameplay, every part of Shovel Knight made truly feel like it was some lost late-era NES game. I bring this up because Yacht Club is now publishing another action-platformer going for the exact same feel: Cyber Shadow, from developer MekaSkull. While borrowing more from the likes of the Ninja Gaiden games and old Natsume action games, the partnership with Yacht Club does make it feel like the pressure to live up to Shovel Knight’s legacy is arguably greater here that ever. So is Cyber Shadow also worthy of being called another lost NES classic?

Set in the futuristic Mekacity, Cyber Shadow stars the titular Shadow, a ninja awakened from a slumber in stasis, now in a robotic body. It turns out that the evil Dr. Progen has taken over the world with a synthetic army, and to make matters worse, his army is powered by the souls of the other ninja from Shadow’s clan, now wiped out. Their only companion is L-Gion, a little robot guide that assists them as they fight their way through the city ruins, as Shadow is now the last chance to taken down Progen. All Shadow has with them — besides their sword and skills — is a locket containing the image of a young woman, an apparent loved one whose history and involvement becomes more clear as things progress… 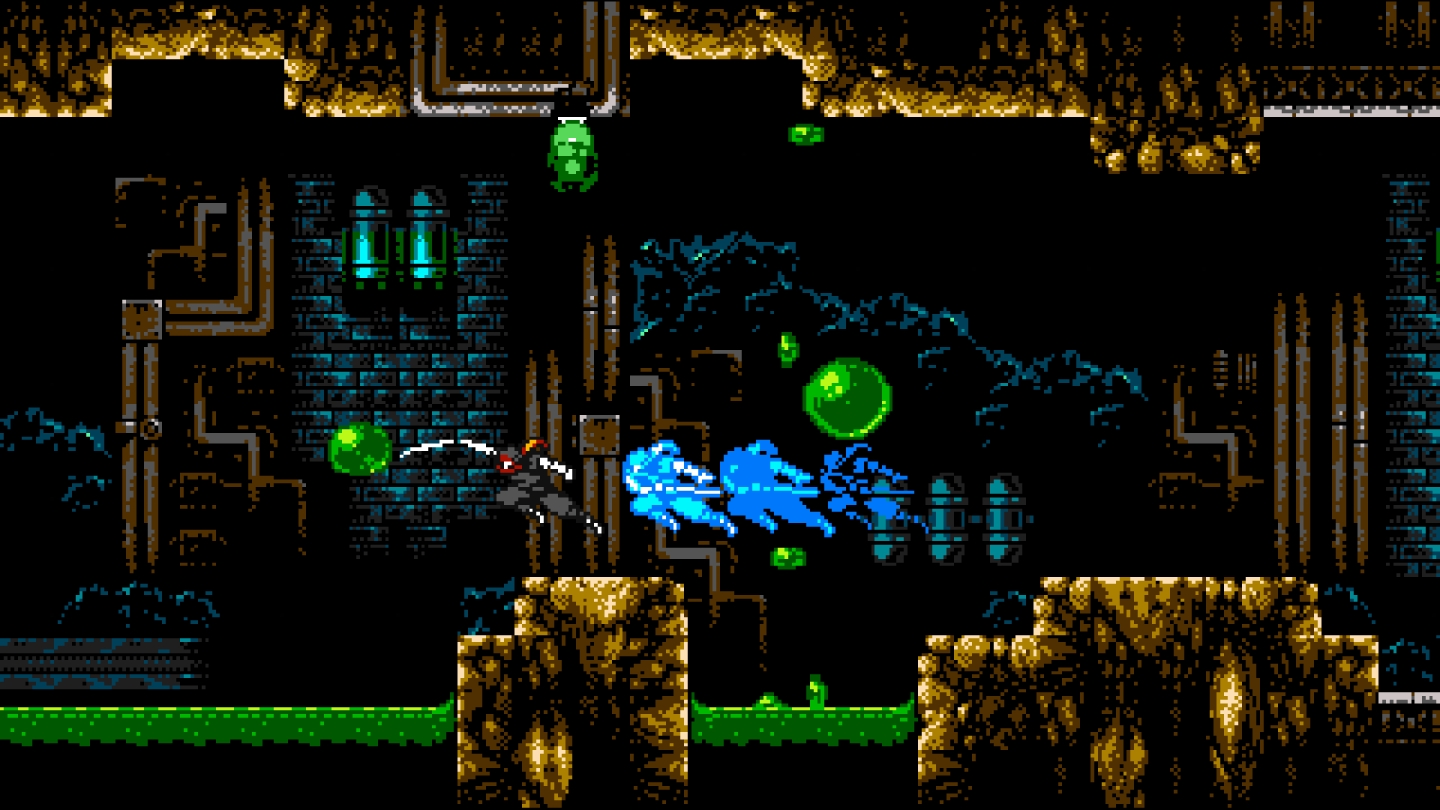 The first thing that immediately strikes you when playing Cyber Shadow is, unsurprisingly, the presentation. The pixel art and animation are astounding, and even with the various little touches like parallax scrolling, it looks exactly like an NES game pushing everything it has to the limit. Despite the apocalypse that’s underway, there’s a great variety of color in all places, with a nice blend of industrial environments ranging from robot factories to laboratories swarming with biological horrors. The enemies are also detailed and have several different forms, especially when it comes to the rather imposing bosses, some of which take up a good chunk of the screen. Finally, Enrique Martin’s soundtrack is perfect, with a nice array of pulse-pounding synth beats to perfectly suit the mechanical mayhem.

The terrific graphics extend to the cutscenes as well, which leads to another area Cyber Shadow excels in: it’s story. While anyone playing it would easily be satisfied with just the basic plot or between-level cinematics, MekaSkull went the extra distance in order to make sure that we get a feel for all of the players in this saga. Throughout various levels, you can come across terminals detailing Dr. Progen’s experiments and his descent into madness, remaining essence from fallen comrades that gives you their final thoughts, a look into the clan itself via areas accessed through meditation and more. Some of it is in plain sight, some of it is hidden, but it’s all fantastic, especially when it nicely blends together sci-fi and a bit of fantasy, even leaning into body horror in a few scenarios I won’t get into.

Speaking of the aforementioned hidden areas, the game does contain a nice chunk of secrets as well, with several hidden passages or destructible walls to find. Some of these may lead to even more challenging areas to traverse, but can offer up rewards of possible health extensions or SP extensions that allow you to spend more on skill you unlock as you go along, like shuriken throwing, upward fireball blasts or dashes followed by powerful strikes. All of these are fun and easy to pull off, thanks to the gameplay that perfectly mimics the jump-right-in nature of the NES greats (it even has little robotic helpers that you can find and purchase in order to assist you, bringing a little bit of Shatterhand to mind), down to the aforementioned bosses putting up some amazing fights. Indeed, a good chunk of the combat is also a highlight, thanks to enemies that mix things up nicely. 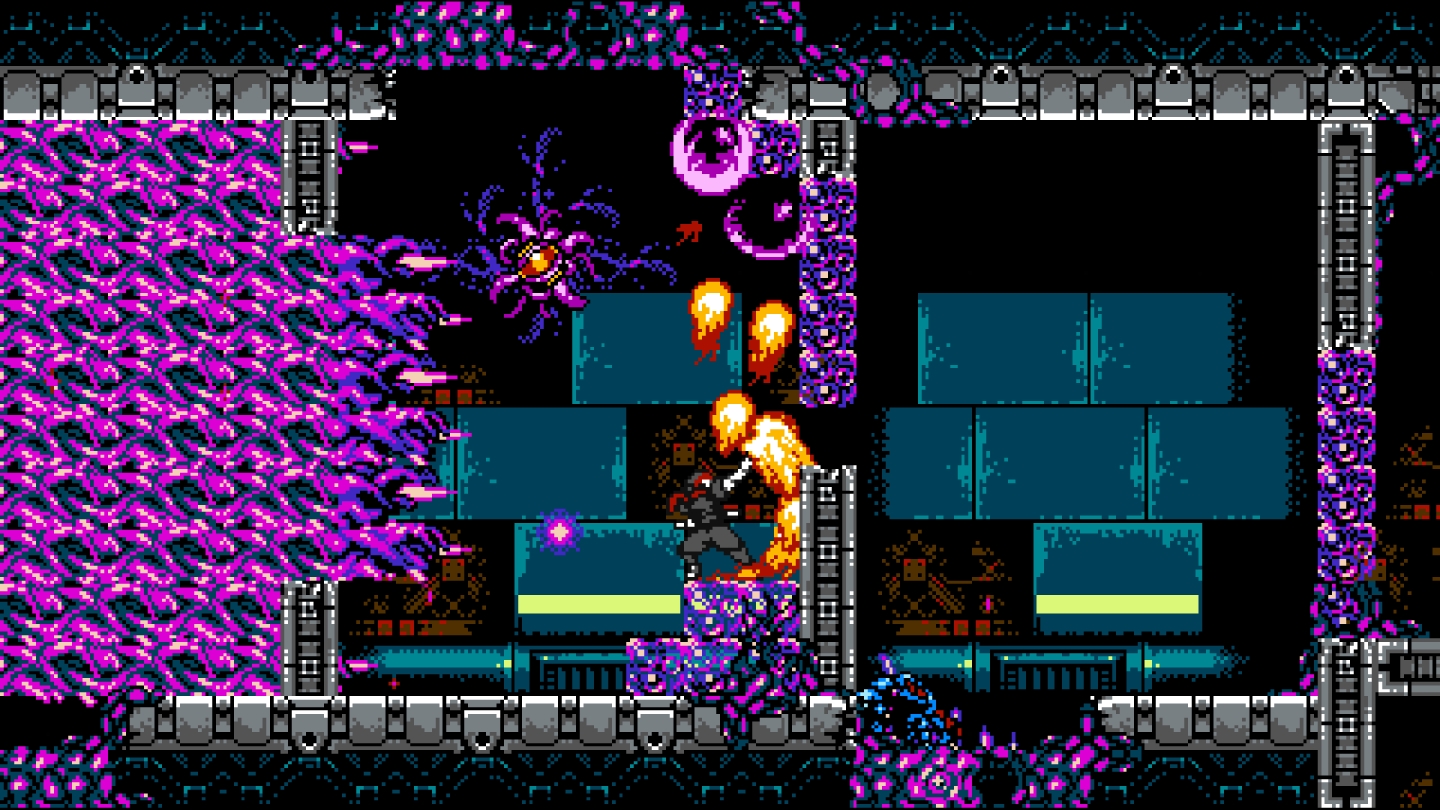 While all of those skills will assist you as you move along, though, Cyber Shadow does also give you reasons to visit previous areas, thanks to a few parts only accessible via skills learned later. It’s not exactly a metroidvania game, and you can only travel to previous chapters via certain terminals, but it’s still a welcome touch for completionists to tackle or those looking for a few more possible upgrades, even if traversing areas you’ve previously been in can still be awkward.

So while incorporating more modern storytelling and a touch of open-endedness, Cyber Shadow does succeed in meeting a high points for a game mimicking great NES action games, but unfortunately, is also brought along a few flaws from that era as well. For one, while it replicated the hard-as-nails difficulty of the times, it also mimicked some of the fake difficulty as well. The game does seem to have one too many insta-kill hazards, along with several enemies that can easily knock you back. And as seen with the likes of Blasphemous, this is in no way a good combination. Not helping is the fact that the window of invincibility after being hit is also small, so in certain places it’s not long before you’re quickly drained of life after a mistake.

Then there are the items you can purchase. Each checkpoint also serves as a little shop of sorts, where you can use the currency you collect to purchase tools that you can respawn with after you die, permanently adding them to that checkpoint. It’s a neat little way to add strategy, deciding whether or not you want to gain back all your SP after respawning or gain a helper that can fire charged shots (to provide an example) or whether you want to save them for a later checkpoint instead. Unfortunately, the game eventually reaches a point where some of these purchases feel required, and that’s where you have to find ways to grind in order to afford them, which reduces the fun. 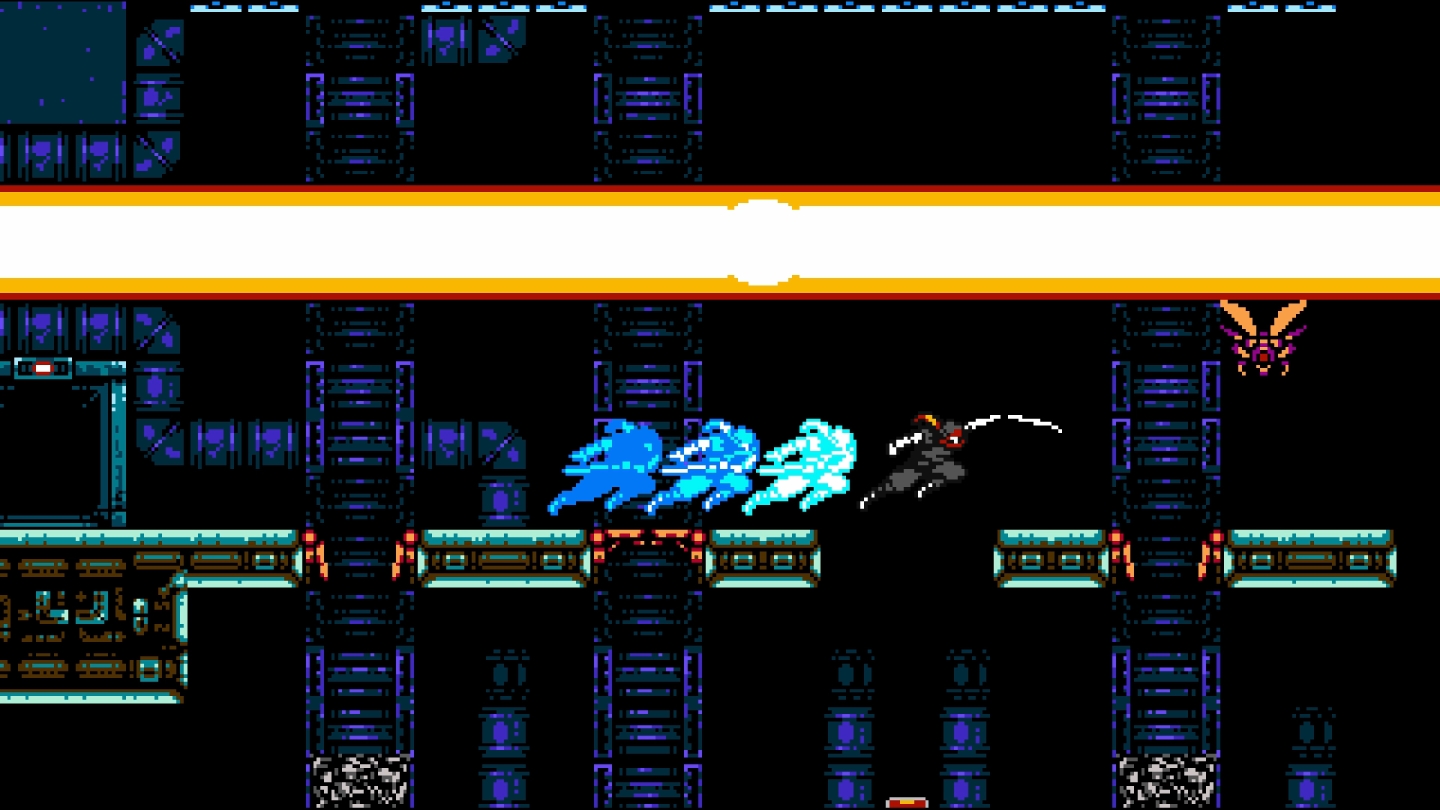 Finally, maybe it’s just all of those annoying bits of difficulty coming into play, but some of the levels feel awkwardly designed, with more than a few sections being dragged out as the distance between checkpoints in them can get annoying. Cyber Shadow even seems to have a few pacing issues in them, coming off as not fully certain how to blend the story and gameplay. During one particular level, I finished an epic boss fight with a huge mechanical dragon that felt like the perfect way to cap off the level…only to then advance and find a shrine where I had to have Shadow meditate in order to access another boss fight in order to gain a damage boost to the sword so that I can break down a door to advance…only for that to lead to another boss fight that basically just existed to advance the story, finally ending the level. And that wasn’t even the halfway point.

Between cheap traps and pacing issues, levels can get rather aggravating. The kicker is the final level, which requires you to climb a large tower with no checkpoints for seemingly an eternity, having to rely on air strike jumps in order to climb, which are possibly the most fickle mechanic to pull off. Of course, that may be because they were required all of maybe once throughout the entire game up until then, and were never even really tutorialized, and now L-Gion is suddenly informing me that I’ll need to chain together two, three or even four of them. And did I mention that the spots you strike in order to jump double as enemies that fire shots at you, and regenerate all the time? Fun indeed!

Sadly this has become another one of those reviews where despite the fact that I loved the game overall, I spent too much time discussing negatives. But it’s only because all of Cyber Shadow’s strengths come its simplicity, the way it still manages to capture some true NES fun, the kind that doesn’t necessarily require lengthy praise. So maybe that makes the more detailed flaws stand out more, but the core gameplay in Cyber Shadow, combined with its other strengths, still makes it a winner, and one that does Yacht Club’s magnum opus proud. 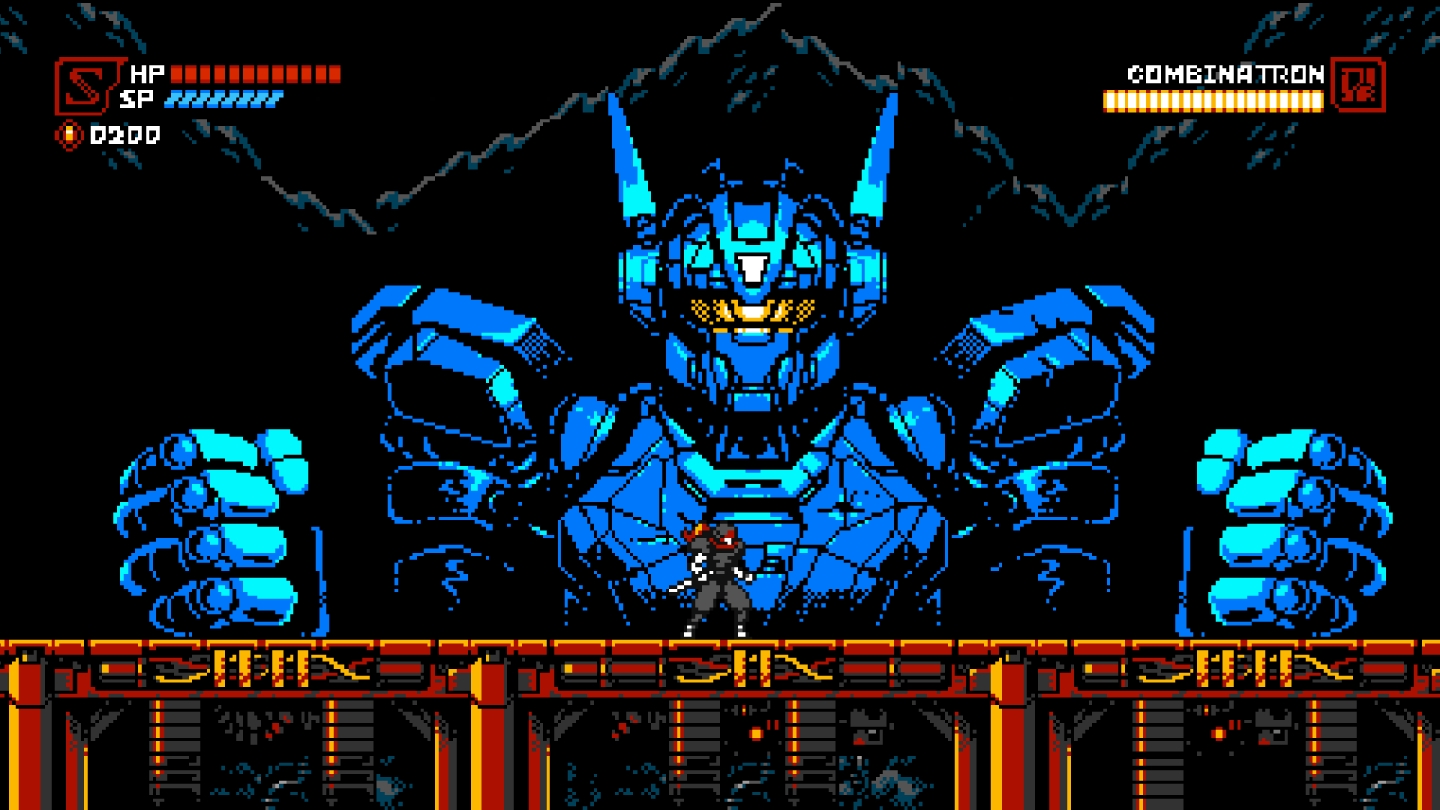 There’s no better way to sum it up than just by getting straight to the point: Cyber Shadow is a fun action-platformer and one that expertly emulates the NES classic of yore. While it also kept some rather hair-pulling moments, largely thanks to a few annoying level sections, it still manages to deliver the type of classic, action-packed gameplay that the best games in the genre were known for. Throw in an engaging story, superb graphics and a few neat secrets, and this is one throwback to a twisted cybernetic future worth basking in.